PTI had earlier reported that Delhi Capitals offered KXIP Suchith and an additional sum of Rs 1.5 crore as part of the exchange. Ashwin, 33, will get Rs 7.6 crore, his value from the IPL 2018 auction.

“He’s easily one of the best and most experienced spinners around, with a tremendous record in India and IPL colours. There’s no doubt in my mind that Ashwin’s presence will benefit our team tremendously, as we eye the big prize the IPL title,” said Delhi Capitals co-owner Parth Jindal.

“Ashwin adds a lot of value to any team that he’s a part of, and I’m sure it’s going to be no different when he joins Delhi Capitals,” said Delhi Capitals Head Coach Ricky Ponting on Ashwin joining his team.

“It is no secret that the pitch on our home ground is on the slower side, and is known to assist spinners. I believe, Ashwin, with his clever bowling, will have a tremendous impact when he bowls on it,” he added.

The 33-year-old spinner has been among the top performers in the IPL since making his debut in 2009, having snared 125 wickets from 139 games at an excellent economy rate of 6.79.

He was an integral part of the Chennai Super Kings side that won back-to-back titles in 2010 and 2011.

As captain, Ashwin was unable to change the fortunes of KXIP, one of the three original teams still to win an IPL.

The team failed to make it to the playoffs in both seasons despite a few promising performances. Opener KL Rahul will now be among the frontrunners to be named captain of the franchise.

The IPL transfer window closes next week, on November 14, and more announcements of the trade-offs are likely to be made before that. 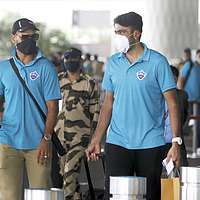 NEWS
Longer build-up opportunity to experiment, it's like laboratory: Ashwin
"This is actually a wonderful opportunity to top up your skills, try out new things. It's like a laboratory to try things out in the game that you love so much," said the offie