Learning from mistakes, the Knight Riders hunt for glory again 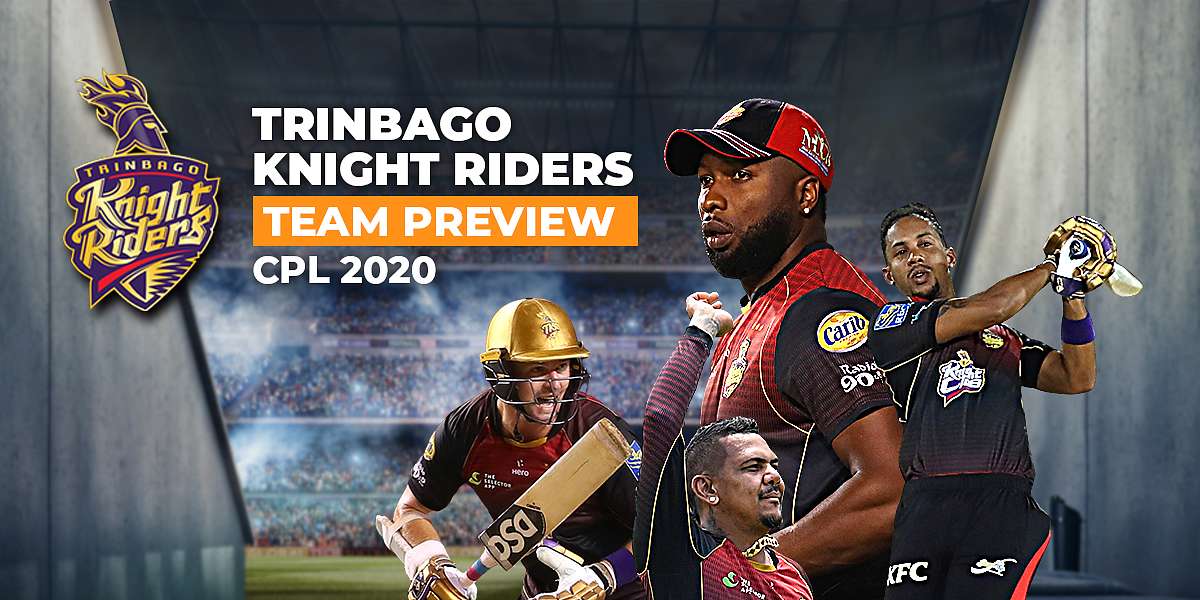 Learning from mistakes, the Knight Riders hunt for glory again

No other team has dominated the Caribbean Premier League (CPL)CPL as much as the Trinbago Knight Riders has. Representing the Trinidad & Tobago region in the Caribbean, the side has made it to the play-offs every season since the league’s inception in 2013. Their association with Kolkata Knight Riders in 2015 - the IPL franchise owners bought a stake in the CPL franchise - has brought them a long way.

Kolkata have often extended their best practices to their Caribbean twin in terms of players, coaches and various techniques that have contributed to render Kolkata as one of the more successful IPL sides. Brendon McCullum, contracted to both Kolkata and Trinidad as head coach, is a prime example of such measures.

As a result of this unique association, Trinbago Knight Riders have won three championships in five years till date.

Although Knight Riders finished fourth in the points table last year going as far as the second qualifier, there was a lingering feeling that they fell short of justifying their potential. The sentiment was induced by four consecutive defeats which resulted in a fourth spot finish elongating their path to the final - which they missed by one step.

The Knight Riders have retained 11 players for the season which shows the confidence kept in the squad. Moreover, Dwayne Bravo’s comeback inevitably irons many chinks in their camp. The allrounder has handed over the captaincy to Kieron Pollard, who took the leadership role in Bravo’s absence last year and is also the current white-ball skipper of the West Indies side.

Bravo’s availability is a huge plus for Trinbago Knight Riders. Failing to fill the void in the previous season, they were the most expensive bowling side in the death overs. They couldn’t defend 216 against St. Kitts and Nevis Patriots in a game that could have ensured a top two finish. The match ended in a tie and they lost the super over. 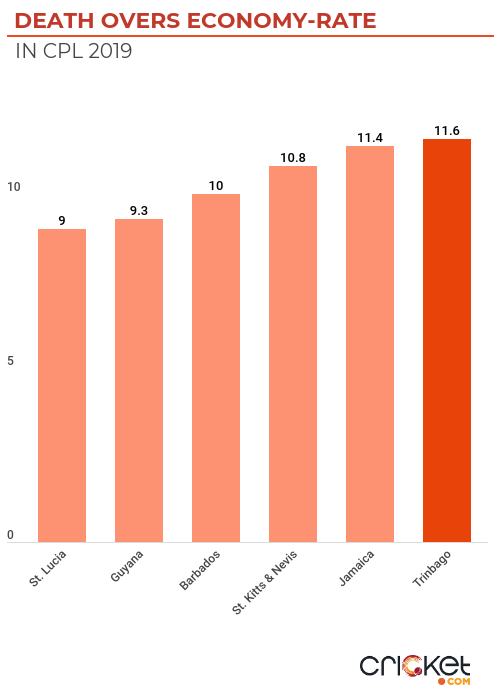 In 2017 and 2018, when Knight Riders won the title, their economy during the death overs was 9.4 and 11 runs per over respectively. Bravo bowled a majority of these death overs then.

However, Bravo will be returning to the cricket field after five months. He is 36 now. His bowling form in the death has been quite indifferent in the last five years. The notion is that his slower ones have been found out. Yet, he fought back strongly in 2019. He is immensely confident of his calibre and so is the Trinbago outfit in his presence. 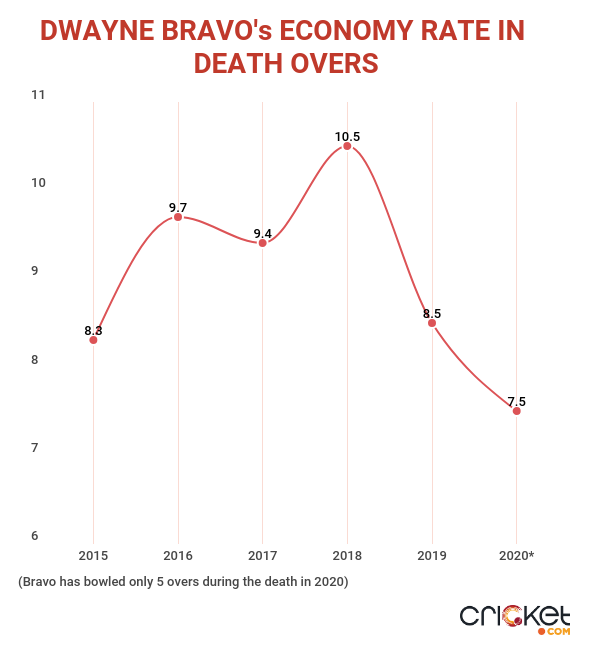 The Knight Riders also missed Bravo, the batsman. At the death, they scored 292 runs at a moderate run-rate - 10.8, the third-best in a six-team competition. 223 of these runs were scored by Pollard at an impressive strike-rate of 190.6. The numbers implicate the lack of support. 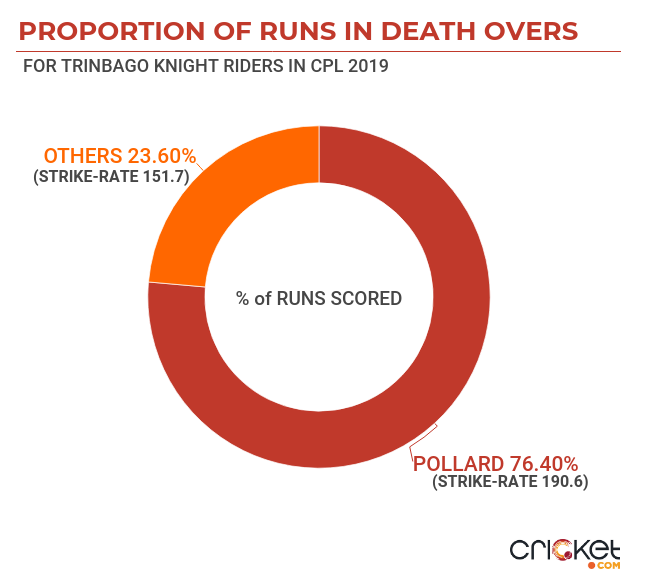 This season, the Knight Riders look in better shape to exploit the death overs with not only Bravo but a new recruit in Sikander Raza to encourage the scoring rate with Pollard. It will help the skipper Pollard, also one of the most impactful CPL batsmen in the tournament's history according to the Cricket.com's index to play more freely.

At the top, Trinbago has always been blistering. They batted at 8.6 runs per over during the Powerplay last season - the second-highest. They only played 19.8 balls per wicket - the least in this phase amongst all sides - but it was the aftereffect of throwing the kitchen sink by opening with Sunil Narine.

Overall, their batting line-up boasts of internationally established batsmen from top to bottom. They have the most established T20 cricketers, not only in the Caribbean but in Trinidad as well. While other teams can take time to gel, Knight Riders’ closely-knit group of players who have played with each other since a long time for the West Indies and T&T in various formats will already feel at home. Not to mention, the whole tournament will take place in Trinidad & Tobago and the experienced lot of cricketers will be more aware of the pitches.

Spin proved to be the Achilles Heel for the Knight Riders in 2019, both with bat and ball.

Barbados Tridents and Guyana Amazon Warriors dominated the Knight Riders. The Knight Riders lost five out of five games against them. These were also the finalists of the season. Barbados and Guyana’s successful campaign was driven by their spinners who wore the Knight Riders’ batsmen into submission. Though the Knight Riders maintained a healthy run-rate of 8 against spinners, they also lost wickets to them more consistently than any other side. 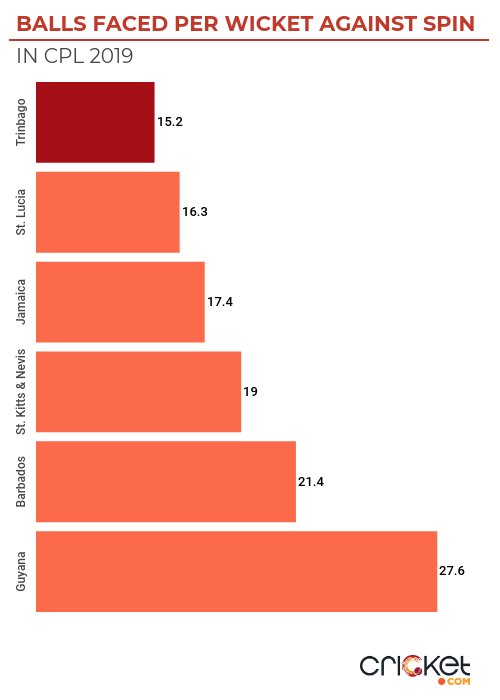 The two teams will once again bombard Knight Riders with spinners. Warriors have maintained their core group of tweakers and Tridents have gone from strength to strength adding Rashid Khan and Mitchell Santner to their squad. The contest between spin and Knight Riders will be intriguing to see.

The Knight Riders themselves boast of decent spin options in Sunil Narine and Kharry Pierre. However, they were only able to control the flow runs. Their economy rate - 6.9 runs per over - was the best but their balls per wicket ratio - 29.2 - was the least effective amongst all sides.

Missing an aggressive option, they have re-signed the leg-spinner Fawad Ahmed. The Australian leggie was the highest wicket-taker in the 2018 edition of the tournament (22) donning the Trinbago jersey. In 2019, he was seen in St. Lucia’s colours.

Knight Riders have also drafted Pravin Tambe - the first Indian player to be contracted in CPL. A leg-spinner, Tambe’s signing is another welcome consequence of Trinbago’s synergy with Kolkata.

A common conception against Knight Riders suggests that the core of their local players is past their prime. In reality, it is the same core which should guarantee them a play-off spot once again in the upcoming season. Taking lessons from the slip-up last year, they appear well prepared for the task in hand. They are also the only side which did not have to tinker with their squad or management post the players draft because of COVID restrictions or international commitments of players. 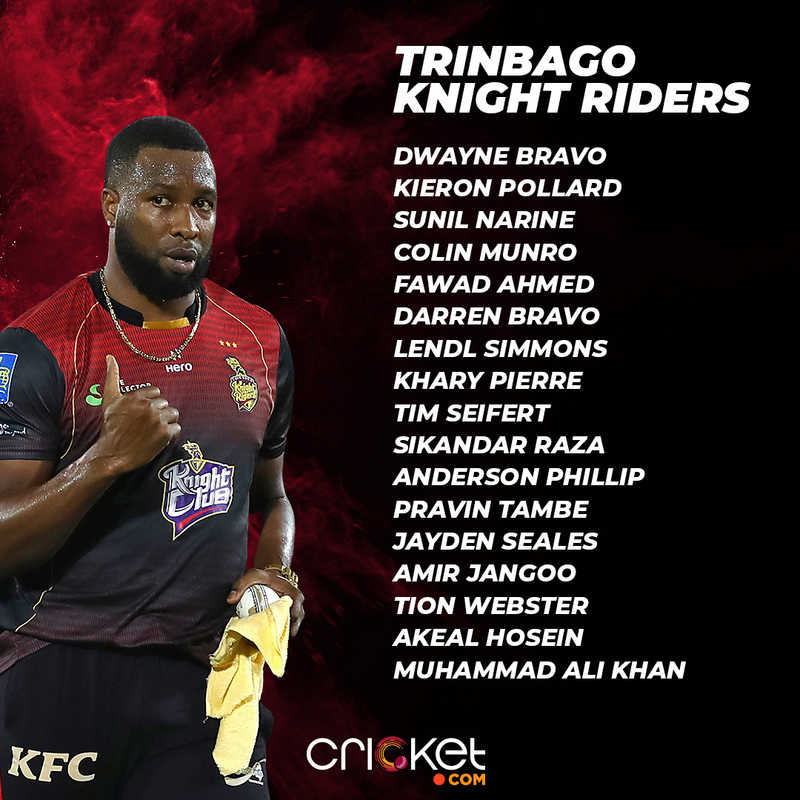 It will be interesting to see if Knight Riders open the batting with Narine given they have three openers set to feature in the XI.

Pierre carved a niche for himself bowling during the field restrictions last season but might have to make way for Ahmed as the Knight Riders seek an aggressive approach in the spin department. We might also see the U19 star, Jayden Seales in the XI. Known to swing the ball in both directions and clock 140 kph consistently, he will add a different flavor to their bowling attack. The tracks are expected to become slower with the progress of the tournament and the Knight Riders can field a four-man spin attack bringing Pierre into the XI at the expense of one of the two specialist pacers.