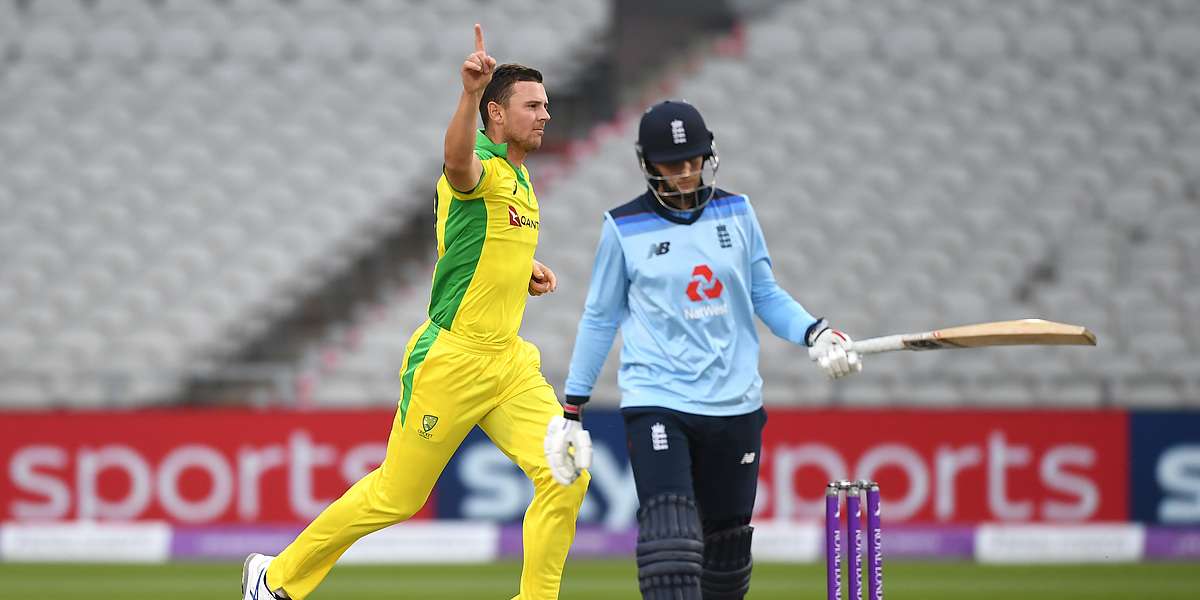 Sam Billings blasted a 118-run knock for England, which went in vain as Australia downed the hosts by 19 runs to win the first one-day international of the three-match series at Old Trafford on Friday (September 11).

Josh Hazlewood struck twice on his way to 3-26 as England could only manage 22 runs for the loss of two wickets in the Powerplay.

Mitchell Starc and Josh Hazlewood got off to a decent start as the hosts could manage only 3 runs from the first two overs.

After a few balls zipped past the bat, Jason Roy (3) handed back a catch to Hazlewood who grabbed the ball with one hand and gave the visitors the first breakthrough in the 4th over.

Bairstow scored the first boundary in the 5th over for England, who were off to a horrible start in their chase as Hazlewood continued troubling the batsmen and dismissed Joe Root (1).

The bowler bowled a couple of maiden overs and conceded his first boundary of the match in the 14th over off Bairstow. And then a six lofted by Eoin Morgan.

The tourists brought leg spinner Adam Zampa into the attack, who gave another shock to the hosts by removing captain Morgan (23), who was caught by Maxwell at midwicket in the 15th over. He dismissed Buttler in his next over to put England under pressure. The English side were 57 for 4 in the 16.1 overs.

Bairstow finally got some space as he struck two huge sixes off Zampa to accumulate some runs for England and also completed his fifty off 78 deliveries.

Billings fired two fours and then a top edge went all the way for six collecting 15 runs off Cummins. England scored 45 runs in the 5 overs. Bairstow continued his fire and slammed Cummins for a six and Stoinis for a four. The latter was the 7th bowler to bowl in 30 overs. Billings also hit the fence off Cummins and England found some momentum in the partnership. Both batsmen tried to steal singles and also turn those ones into twos as England completed 150 runs.

Bairstow charged Starc with a four and then he hammered a huge six towards midwicket as the ball disappeared. A new ball was taken which was unlucky for Bairstow, who blasted 87 runs off 107 balls with the help of four boundaries and four sixes before being dismissed at the hands of Adam Zampa in the 36 over as England scored 174 for 5.

Billings completed his 50, while Moeen Ali went back to the pavilion soon after begin removed by Hazlewood, who grabbed three wickets conceding 26 runs in his 10-over spell.

Billings shouldered the run-scoring responsibility for England and opted for an aggressive strategy scoring 34 runs in four overs with the help of five fours and a maximum to complete his career-best ODI score of 80 runs.

England needed 49 runs in the last 3 overs, as Billings, who was just two runs away from maiden ODI century, hammered three fours in the 49th over off Cummins. However, England were still far away from chasing the target as they needed 28 runs in the last over. Marsh was brought into attack who dismissed Billings on the last ball of the innings. The batsman fired 118 runs or 110 balls.

Earlier, Australia were struggling at 123 for 5 in the 24th over when Glenn Maxwell (77) and Mitchell Marsh (73) snitched a 126-run partnership that lasted until the 44th over to help Australia total 294 runs on the board.

After England won the toss and opted to field first, David Warner and skipper Aaron Finch opened the innings with Chris Woakes and Jofra Archer opening the attack.

The 31-year-old got off to a fine start with a good line and length conceding just five runs in his first two overs, while Jofra Archer gave away 8 runs including the first boundary of the day slammed by Finch. However, the bowler took revenge and clattered the bails removing Warner (6) to the first ball of his second over.

Marcus Stoinis came in at 3. Mark Wood came into the attack replacing Archer struck immediately. Finch (16) got an outside edge that was caught by Buttler.

Australia lost both their openers for 43 runs in the last over of the Powerplay.

Young Marnus Labuschagne joined Stoinis and earned a boundary that helped Australia complete their 50 runs. In the 12th over, Wood donated three boundaries banged by Stoinis.

Stoinis was doing a good job galloping towards his half-century by accumulating runs through singles or boundaries. However, he could not complete his 50 as Wood sent him back to the pavilion after the batsman scored 43 off 34 balls.

Soon Mitch Marsh joined Labuschagne as both batsmen kept sweeping Moeen Ali for runs. England then brought Adil Rashid into the attack, who is the highest wicket-taker (57 wickets) in the middle-overs (11-40) after India’s Kuldeep Yadav (65 wickets) since the start of 2018.

Rashid, who has been troubling Australia in ODIs soon trapped Labuschagne leg-before.

Australia who were 103 for 4 in the 19.2 overs, send Alex Carey instead of Maxwell to join Marsh at number 6. Carey hit a boundary off his first ball, while Marsh pulled off a drive for four against Ali. However, both spinners tried to minimise the loss on many occasions.

The visitors were 123 for 5 in the 24th over, when Glenn Maxwell joined the side and England brought back Archer in place of Moeen Ali.

Australia earned 6 runs after an overthrow by Moeen Ali hit the fence in Archer’s over. Both batsmen collected runs through singles and doubles. They earned some quick runs as Marsh hit a four off Archer and Maxwell smacked a six off Rashid as Australia crossed 150 runs by the end of the 30th over.

Marsh drove Wood for a four, while Maxwell smashed two fours off Ali as both batsmen snatched a 50-run partnership in the 36th over for Australia, who were 16 runs away from 200.

Maxwell continued firing runs, while Marsh completed his 50. He took Australia past 200 by scoring a four of Woakes as the visitors collected 14 runs in the 40th over with Maxwell smashing a six to complete his half-century.

Rashid who rocked the Australian middle-order, finished with 2/55 as Archer came into the attack in the death overs. Maxwell (77 off 59) hit two back to back sixes before being bowled at the hands of the bowler.

Archer broke the 126-run partnership, which is the highest six wickets stand for Australia against England, surpassing the 112-run stand between Simon O'Donnell and Mark Waugh in Sydney in 1991.

Australia were 249 for six. Archer, Wood and Woakes struck a wicket apiece as Australia batsmen added 45 more runs including three boundaries after the fall of Maxwell’s wicket to complete 294 for 9.

The visitors are now leading the three-match ODI series 1-0.