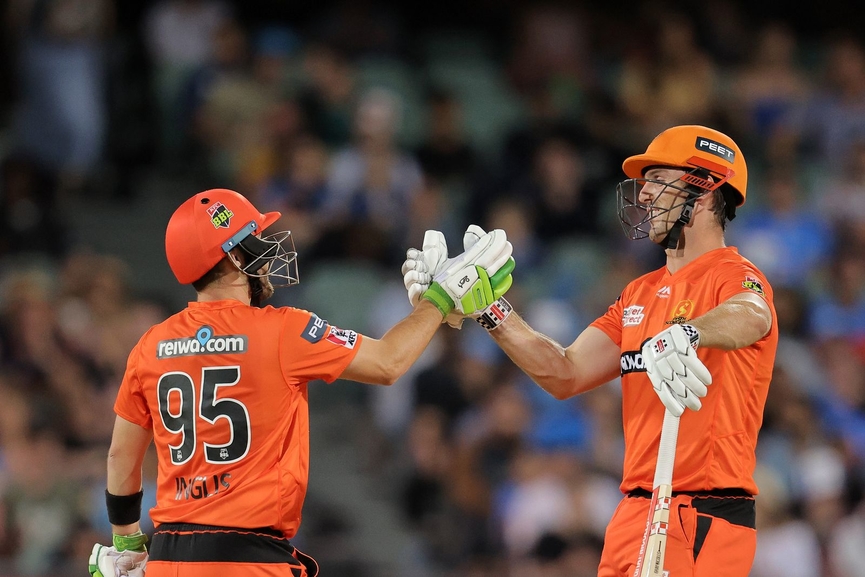 As a result of this win, Perth Scorchers are off the bottom place in the points table

An all-round effort from Perth Scorchers saw them beat Adelaide Strikers by seven wickets at the Adelaide Oval to register their first win of BBL 2020-21. Just like they did against the same team a few days ago, Scorchers won the toss and elected to field, but this time, restricted the Strikers to a modest 146 for 9, despite a belligerent 59-ball 82 by skipper Alex Carey. Scorchers came out to chase with a positive intent and not just got a point for being ahead at the 10-over mark, but added three more points to their kitty by completing a comprehensive victory.

With the bat, Jason Roy (49) in his second game of the season started hitting the ball better and got Scorchers off to a good start. In the end, it was finished off well by Josh Inglis (44*) and Mitchell Marsh (38*), who got their side home with 14 balls to spare.

Thanks to this win, the Scorchers are off the bottom of the table with six points from five games, while the Strikers find themselves in fourth place having accumulated 13 points from six matches.

Scorchers did not let Philip Salt and Jake Weatherald get off to a flying start, getting rid of both of them inside the first three overs. Despite of a 48-run stand for the third wicket between Carey and Matt Renshaw (19), Scorchers kept on picking up wickets at regular intervals to keep the Strikers’ run-rate in check.

Carey was fighting a lone battle and was quickly running out of partners due to which he chose to have the two-over power surge in overs 18 and 19. Andrew Tye conceded 16 of the first over, but Jhye Richardson came to Scorchers’ rescue by removing Carey and moreover, just conceded just four runs off that over. Strikers scored just 40 runs from the final five overs, and 71 from the final 10 overs, which was well below par. 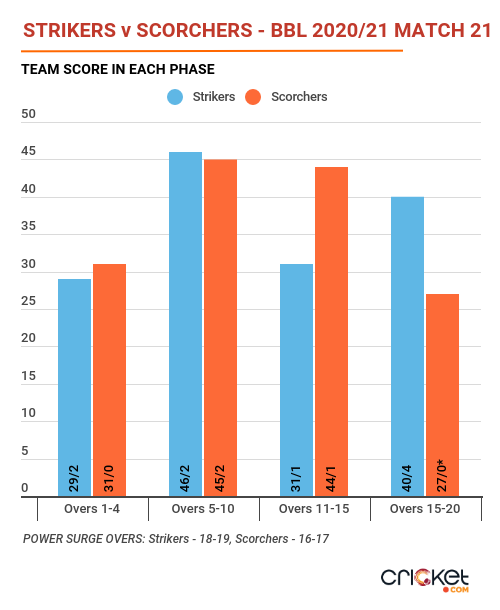 *Scorchers chased down the target in 17.4 overs

A lot of credit wenr to the way the Scorchers fast bowlers, especially Richardson, had bowled. He and Aaron Hardie were the pick of the bowlers, having shared five wickets and gave away just 40 runs in eight overs between them, which played a huge part in keeping the Strikers under 150.

Considering Scorchers got bowled out for 94 in their previous match, it may not have been a straightforward chase for them, but Roy and Liam Livingstone got them off to a steady start, putting on 57 for the first wicket in 44 balls, before Wes Agar had them both dismissed in the same over.

Strikers thought they had an outside chance of perhaps stealing a win when Colin Munro was dismissed cheaply, but those aspirations were quashed when Marsh walked into bat and he batted like he was a man on mission. He and Inglis put on an unbeaten 67-run stand for the fourth wicket to take the Scorchers home without any further hiccup.

The Strikers would be ruing the fact that their batsmen struggled especially in the final 10 overs. Had someone hung around with Carey, they could have added another 15 to 20 runs, which could have made the game more interesting.

Strikers next play defending champions Sydney Sixers at the Carrara Oval on Sunday (January 3), while Scorchers on the same day play Melbourne Renegades at Perth.

Player of the match: Jhye Richardson