Scorchers move to top of BBL table after defeating Stars 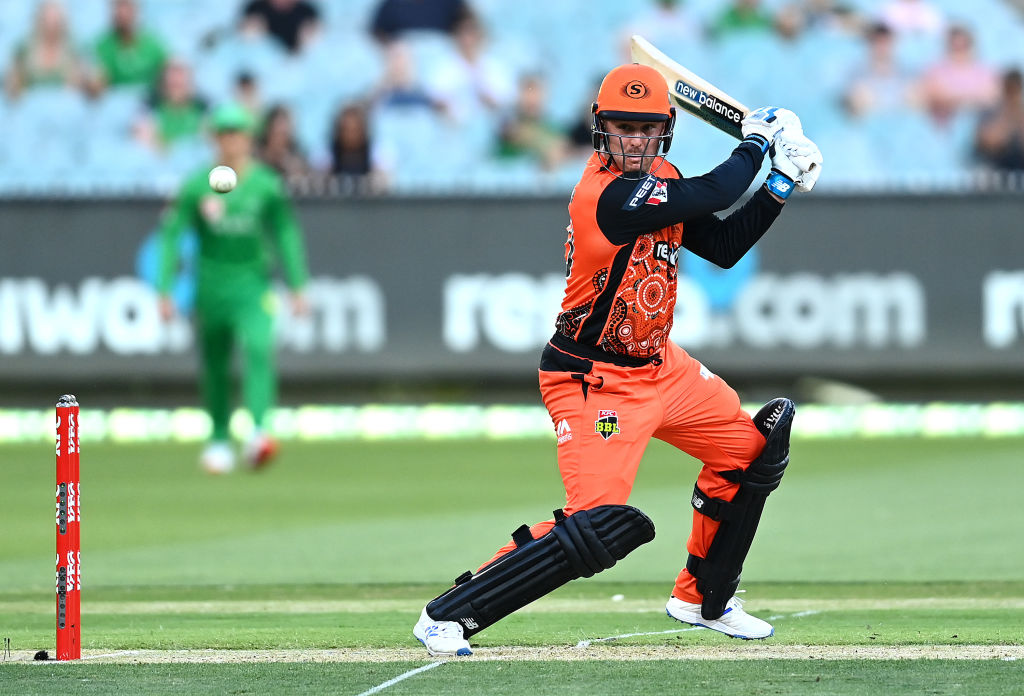 Scorchers move to top of BBL table after defeating Stars

This is the Scorchers' eighth win in their last nine games

In Perth Scorchers’ first four matches of the season, they had suffered three defeats with the other game ending without a result due to rain. At the time, they were languishing at the bottom of the Big Bash League (BBL) table. That was on 28 December 2020.

Move forward 26 days and the Scorchers find themselves at the opposite end of the ladder and, while they’ve already made it to the playoffs, they've also given themselves a great chance of finishing in the top two now. They’ve managed this extraordinary turnaround by securing eight wins in their last nine matches which is an extraordinary run of form.

The latest of those victories came against Melbourne Stars at the Melbourne Cricket Ground on Saturday (23 January 2021). The Scorchers triumphed by 11 runs and, while the Sixers have a game in hand, the Perth-based franchise will end the day as the team that is sitting at the top of the league table thanks to a superior run-rate.

A superb all-round performance resulted in the Scorchers securing the win and it was set in motion by Jason Roy after the Scorchers had been put into bat.

Adam Zampa had bowled just two overs in the first Powerplay previously this season. But with both of Scorchers' openers, Roy and Liam Livingstone, known to be better against pace than spin, Stars captain Glenn Maxwell decided to bring his premier leg-spinner in to bowl as soon as the third over.

That move, though, didn't work as Roy took the attack to Zampa right away. After a steady start in the first couple of overs, the third one went for 19 runs with Roy beginning the over with two fours and a six.

At the time, it was almost like the two Scorchers opening batsmen were batting on different surfaces. While Roy was fantastic, Livingstone struggled to get going before he was dismissed by Zahir Khan for a 29-ball 24. But the opening partnership of 83 had put the three-time champions in a very good position.

Nathan Coulter-Nile then got the crucial wicket of Roy immediately after the drinks break. Roy, who had reached his half-century in 28 deliveries, went for another big shot but didn't get his timing right on this occasion. Maxwell had to run back and take a difficult catch, but the brilliant fielder that he is, he made it look effortless.

As a result of losing both openers in consecutive overs, the Scorchers' scoring rate took a hit in the overs that followed. While they scored 79 runs in the first nine overs, they managed only 22 in the next four.

At the start of the 15th over, the Scorchers decided to take the Power Surge and finally regained some momentum with 20 runs coming off the second of those overs. But immediately after, Josh Inglis – who had made a quickfire 26 – had to head back to the pavilion, with Marcus Stoinis providing the breakthrough for the Stars.

Zampa was quite expensive in this match, but he still managed to get one wicket, dismissing Mitchell Marsh for five.

Colin Munro is having a fabulous season and that continued here as he helped himself to an unbeaten 46 off 30 deliveries. It was his fifth 40+ score in his last seven innings. During this knock, he crossed the 400-run mark for the season.

Despite a fine final over from Billy Stanlake, the Scorchers managed 64 runs off the final five which propelled them to 182/4, their joint-highest total against the Stars in BBL history. 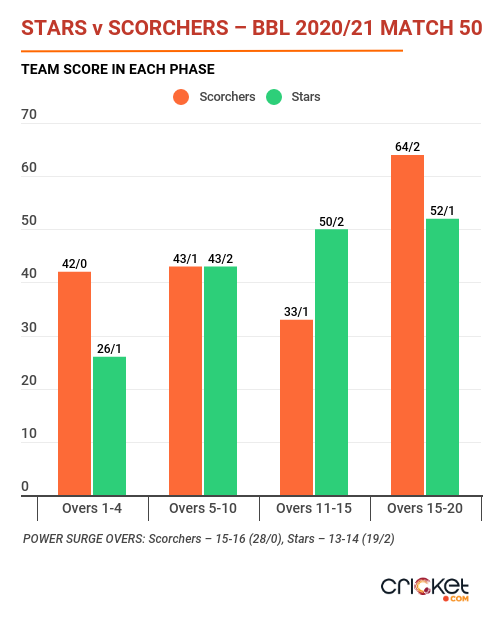 NOT MUCH SUPPORT FOR LARKIN

Stoinis against Jhye Richardson was always going to be a mouth-watering contest. The Stars opener took on his Western Australia teammate early on, making his intentions clear by hitting a huge six in the first over.

Stoinis, though, couldn't make the impact he would have liked as he was dismissed for 14 by Jason Behrendorff in what was a wicket-maiden to end the Powerplay.

The four overs after the fielding restrictions were lifted were quite fruitful for the team from Perth as they got two wickets and conceded just 24 runs in that period. While Seb Gotch was run-out, Fawad Ahmed dismissed Maxwell with his first delivery.

The Scorchers were almost always on the front foot from thereon and secured the Bash Boost point as well.

Nick Larkin gave the Stars hope with an excellent 70 from 44 deliveries. With Larkin batting splendidly and Nic Maddinson supporting him well, the Stars decided to take the Power Surge at the start of the 13th over. While the two overs that followed yielded 19 runs, they also lost two wickets – Maddinson and Coulter-Nile – which was a huge setback for the hosts.

When 13 runs came off the 17th over, the Stars would’ve sensed an opening, but all hopes were finished when Larkin's magnificent innings ended. It was Andrew Tye with the crucial wicket which more or less sealed the match for the Scorchers.

Hilton Cartwright scored an unbeaten 23 from 13 deliveries, but a target of 183 was a bridge too far in the end. The Stars currently sit in fifth but will fall out of the playoff spots for the time being if either Adelaide Strikers or Hobart Hurricanes win on Sunday (24 January 2021).