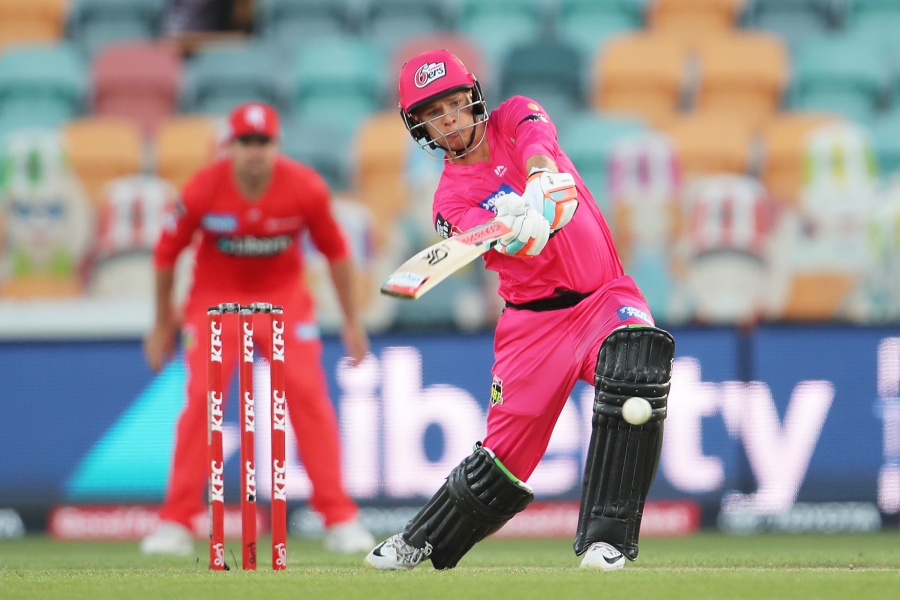 Josh Philippe fell short of a first T20 century by just five runs, but his magnificent innings propelled the Sydney Sixers to 205/4 in their 20 overs, a total the Melbourne Renegades did not come close to matching. It was a terrific effort from the wicketkeeper-batsman who struggled at the start of his innings but played some amazing shots en route to a career-best T20 score of 95.

Philippe was dropped when he was on 24 and that has proved to be expensive as far as the Renegades were concerned as the opening batsman stepped it up a few gears after a slow start, bringing up his half-century in the 12th over. Stand-in skipper Daniel Hughes complimented Philippe well and was looking good and, therefore, it was no surprise to see the Sixers opt for the Power Surge at the start of the 15th over.

We’ve already seen thus far this season that the second Powerplay might not always be beneficial to the batting team. And it started in that fashion here as Hughes was dismissed off the first delivery of the Power Surge. It was Peter Hatzoglou with his second wicket of the match, with both of his scalps coming during intervals of the game when the fielding restrictions were on.

SIXERS GO BIG IN SECOND HALF OF THEIR INNINGS

While the Power Surge began with the setback of Hughes' wicket, the Sixers took full advantage of the fielding restrictions thereafter. Across the two overs, the defending champions scored 32 runs, which included some remarkable batting by Jordan Silk against Kane Richardson. The Sixers middle-order batsman hit five boundaries off the Richardson over, resulting in the most expensive Power Surge over (20 runs) until now in the BBL.

Silk's career T20 strike rate is under 120, but if you watched him bat here, you wouldn't have thought so. The 28-year-old took the attack to the Renegades from the word go and scored an unbeaten 45 from just 19 balls. The partnership between Philippe and Silk was worth 70 runs from only 30 deliveries, with the Sixers scoring 144 runs in their last 11 overs. 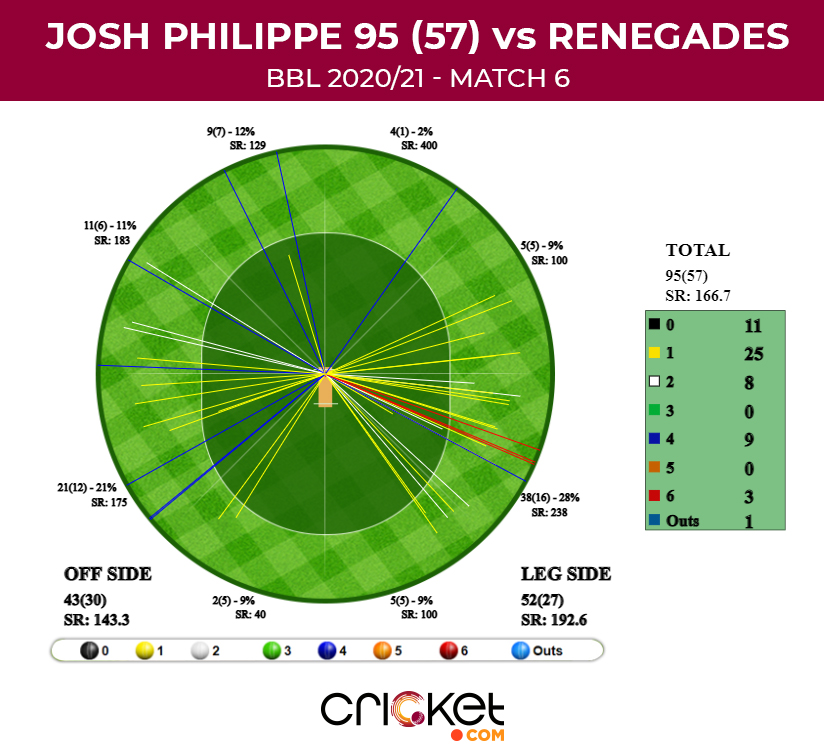 Earlier, Renegades skipper Aaron Finch had put the Sixers in to bat. While it was the fast bowling duo of Josh Lalor and Richardson who provided the early breakthroughs for the Renegades in their game against Perth Scorchers on Saturday (12 December 2020), Finch decided to give leg-spinner Hatzoglou the second over this time around and the change in strategy worked a treat.

Hatzoglou, playing in just his second BBL match, got the wicket of Jack Edwards with his first delivery of the innings. Edwards would’ve been disappointed to have not followed up with a notable knock after he had made his highest T20 score against the Hobart Hurricanes on Thursday (10 December 2020).

Richardson came in to bowl only in the sixth over and he got a wicket right away, dismissing the dangerous James Vince for 17. Vince and Philippe were building a handy partnership after the early dismissal of Edwards and, hence, it was an important wicket at the time for the Renegades.

In the very next over, things could have gotten even better for the team from Melbourne, but Beau Webster dropped a pretty simple catch off his own bowling. Crucially, it was Philippe who got the reprieve and the wicketkeeper-batsman took full advantage of that opportunity.

Chasing a massive target of 206, the Renegades got off to an awful start, losing three wickets in the first Powerplay. Chasing such a huge score, you need to be aggressive from the start, but unfortunately for the BBL 8 champions, nothing clicked with the bat.

It was Finch who had to head back to the pavilion first, as he offered an easy catch to Dan Christian at mid-off off the bowling of Gurinder Sandhu. Finch was, actually, lucky to have not been run-out just two deliveries earlier.

Ben Dwarshuis got a wicket with his first delivery against the Hurricanes and he repeated that feat here, dismissing Sam Harper as soon he was brought into the attack. The Sixers left-arm pacer wasn't done as he dismissed Rilee Rossouw for a first-ball duck three deliveries later, and as a result Renegades lost three of their top four within the first three overs.

After the early loss of wickets, the Renegades seemed to be playing for the Bash Boost point, which meant that they needed to get to 76 at the end of the 10th over. In pursuit of that, they repeatedly went for the big shots, but it only led to them getting bowled out for 60, thereby losing the match by 145 runs.

While Dwarshuis accounted for four dismissals, Stephen O'Keefe and Carlos Brathwaite chipped in with three and two wickets respectively.

Although the Renegades managed to just about get past the lowest-ever BBL total, the margin of victory for the Sixers (145 runs) is a record in the tournament's history.