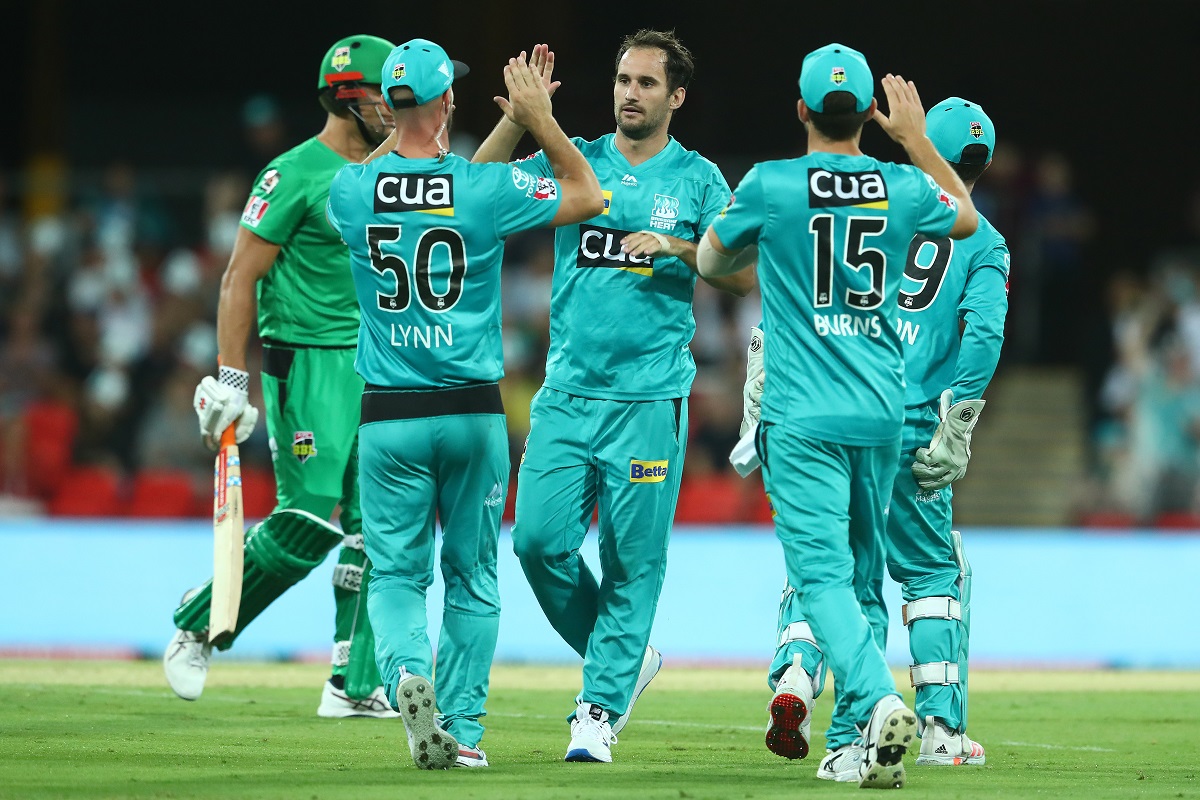 Rain played a big role as Brisbane Heat defeated Melbourne Stars by 18 runs on the basis of Duckworth–Lewis–Stern method (DLS) in Match No. 32 of Big Bash League (BBL) 2020-21.

Earning four points from this win, Heat jumped to fifth place in the BBL’s point table.

It was Chris Lynn (48 off 23), who helped his side score 115 runs in the first innings that was interrupted by rain twice. The match earlier was declared to be played in 14-overs-per-side. But when the rain stopped the play again for around 30 minutes, the match was reduced to 10-overs-per-side with no power surge was given to the teams.

On the basis of DLS method, Stars were given 129 runs to win in 10 overs which was quite difficult in rainy conditions.

Chasing the target, Stars made a good yet slow start as they were 36 for no loss in the powerplay. By the end of the fourth over, their run-rate was 9 while the required run-rate was 15.67.

Xavier Bartlett opened the attack for Heat, while Fletcher faced the first ball of the innings. The 33-year-old hit a four while Marcus Stoinis found the fence twice to earn 15 runs in the first over as they needed a run-rate of 12.78 to win the match.

As per the need, Jack Wildermuth reduced Heat’s stress as he conceded only two runs in the second over. Stars required 14 runs in an over when Mujeeb Ur Rahman came into attack and conceded 7 runs in the third over. Both the batsmen accumulated runs by taking ones and twos.

In the fourth over, Stoinis smashed Wildermuth by hitting a six and a four to make it 36 for no loss by the end of the powerplay.

Mujeeb Ur Rahman dismissed Fletcher (15 off 13) before conceding a boundary in the fifth over. Fletcher has not been in good form this season as he could not surpass 18-run score in any of his previous games. Nicholas Pooran, however, compensated the loss by smacking a six and a four off Rahman in the same over. Pooran (16 off 5) looked in fine form as he struck another six in the next over off Steketee, who took revenge and removed the batsman soon. The bowler grabbed another wicket by dismissing Stars skipper Glenn Maxwell, who could not open his account.

Nick Larkin, however, stole the show and displayed his outstanding skills and scored 36 runs off 16 balls hitting two sixes and four boundaries.

Lewis Gregory got rid of Stoinis (34 off 20) in the seventh over before conceding a boundary.

Larkin slapped Steketee with a four and a six in the same over. The batsman did not stop here, as he hit three boundaries and a six off Gregory in the ninth over to help his side score 106/5 by the end of 9 overs.

It was difficult for Stars to win the match when they needed 24 runs off 6 balls.

Bartlett came into attack for Heat in the last over and did allow a single boundary to Stars batsman, who could score only 5 runs in that over and lost the game by 18 runs on DLS method.

Return of Chris Lynn added power to Heat’s batting line up as the skipper blasted 29 runs off 12 balls hitting three fours and two sixes in the powerplay that helped his side made a blistering start in the game. Max Bryant also contributed 15 runs off 12 balls as Heat scored 47 runs for no loss in the first four overs.

Stars' Sam Rainbird bowled the first over conceding four runs. Bryant hit a couple of boundaries in the second over off Billy Stanlake. Lynn, who looked eager to touch the fence, made it possible in the third over by hitting a four and a six. He continued smacking bowlers as he found the fence twice and hit a six in the last over of the powerplay.

Adam Zampa who has been expensive this season and has taken eight wickets in his last five matches came into the attack in the fifth over and gave away just five runs. Billy Stanlake, who conceded 10 runs in his first over, this time too proved costly as he helped opponents accumulate 14 runs in his second over. Bryant smacked him with a four and a six in the sixth over of the match.

Zampa, however, looked in balanced form as he grabbed two back to back wickets to put pressure on Heat. Bryant was dismissed for 31 off 23, while Joe Denly had to go back to pavilion for a duck. Heat were 72 for 2 before rain stopped the play.

Chris Lynn was on fire as he smashed Glenn Maxwell by hitting two back to back sixes in the 9th over. However, after just three deliveries, rain interrupted the game again.

Maxwell took his revenge after the play resumed as he clean bowled Heat’s skipper Lynn, who was just two runs away from his half-century. Lewis Gregory then came to bat at number 5 and hit a six of Maxwell, who conceded 20 runs in his over.

Catwright came into attack in the last over of the first innings that was reduced to 10-over-per-side due to rain. The all-rounder conceded innings' highest runs (22) in an over as Joe Burns (22* off 11) struck a couple of boundaries and a six, while Heat earned five runs on a no-ball. They scored 115 runs after losing 3 wickets. 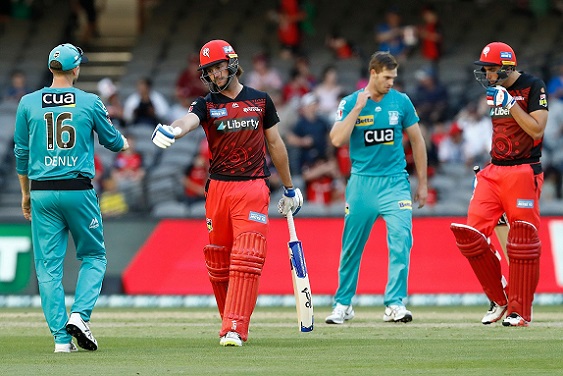