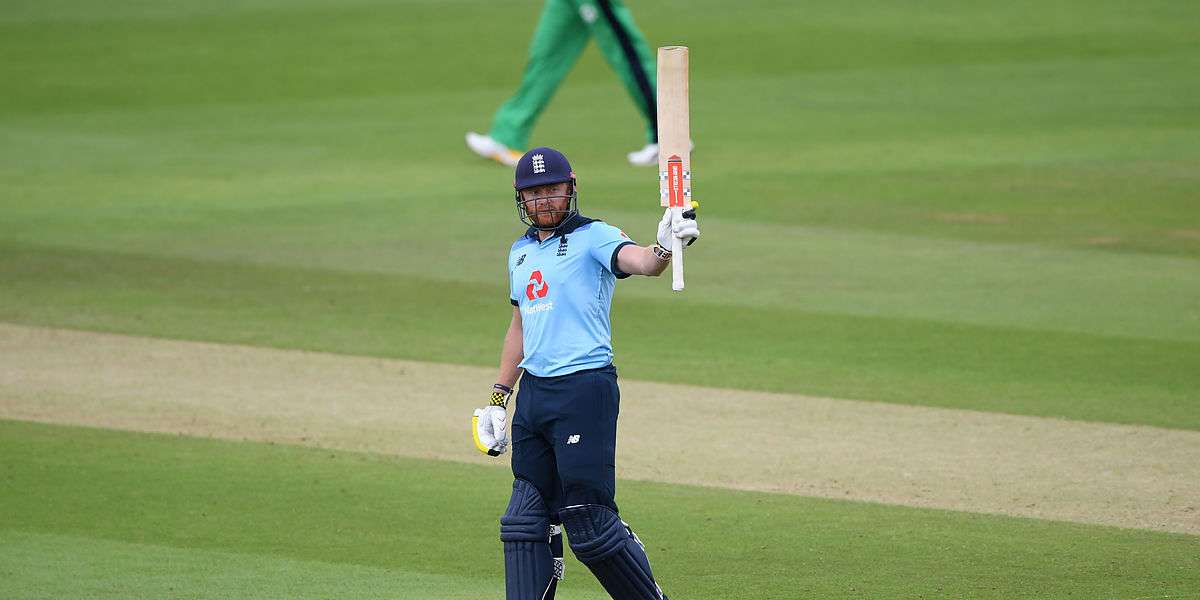 After a brief stutter, England successfully overcame the Irish challenge at Southampton

A delightful innings from Jonny Bairstow and an all-round performance from David Willey helped England win the second One-Day International (ODI) at the Ageas Bowl by four wickets. Curtis Campher was once again the star for Ireland as he top scored with 68 and returned with a couple of wickets with the ball. With this win, England have clinched the three-match series 2-0 with one more game to play.

After being set 213, England got off to the worse possible start as Jason Roy was dismissed for a duck after scooping the ball straight to cover - a perfect start for Ireland. However, Bairstow looked to be in the mood and smoked plenty of boundaries at the start to relieve some pressure on James Vince, who had the luxury of getting his eye in.

England brought up their fifty in just the seventh over and they seemed to be on course to win the match with ease. After shining with the bat earlier, it was Campher who struck bowling Vince for 16. Campher made a breakthrough once again, trapping Tom Banton for the second time in the series for run-a-ball 15. However, England were still in a comfortable position at 98 for 3 in the 13th over with Bairstow still going strong at the other end. Sam Billings too seemed to be in excellent touch as he looked to play second fiddle as Bairstow was in explosive form. But, Bairstow did not last long as he nicked one behind of Joshua Little for a blistering 41-ball 82 with 14 fours and two sixes punctuating his innings. The required run-rate was under two-and-a-half and England still had 34 more overs to knock off the remaining 82 runs. Bairstow seemed to have done enough to tilt the game in his side's favour.

England suffered yet another setback when their skipper Eoin Morgan too went back into the pavillion without troubling the scorers, as did Moeen Ali. From 131 for 3, England were reduced to 137 for 6 in a matter of two overs. Ireland were still very much in the game, and then it was down to Billings and Willey to take England home. They resurrected the England chase after losing three quick wickets and England were inching closer to victory.

Billings and Willey brought up their much-needed fifty stand and from there on, they finished the job in hand with an unbeaten 79-run stand. Willey finished with an unbeaten 47 off 46 to go with his two wickets with the ball. While Billings for two games has now remained unbeaten in a successful run-chase.

Earlier, Campher came to Ireland's rescue once again as he second ODI fifty in as many matches and lifted his side to 212 for 9. Ireland were once again on the verge of being bowled out cheaply, but Campher built two solid partnerships: first with Simi Singh, worth 59 and that was followed by a 56-run stand with Andy McBrine and gave Ireland something to bowl at.

In a bid to up the ante, Campher was dismissed in the penultimate over for 68 off 87, but his team ensured that they batted out their 50 overs. The lowest target defended at this venue is 225 - which India did against Afghanistan at last year's World Cup. Ireland, who clearly had a task on their hands, made a cautious start. The pressure put on them by Willey and Reece Topley finally paid off as Gareth Delany was trapped in front by the former for a duck. Willey and Topley are in fact are the first-ever left-handed pacers to open the bowling together for England in limted-overs cricket. Willey doubled England's joy by removing Paul Stirling for 12, thanks to a brilliant catch by Tom Banton at backward point.

Ireland managed just 20 runs in the first powerplay, which was the third lowest score in ODIs since 2019, further damaging their reputation of being poor starters as their batsmen had an underwhelming strike-rate of just 72.6 in the first 10 overs of an innings before the start of this match. Willey bowled his heart out in his first spell, picking up two wickets for 14 from six overs. Eoin Morgan threw in a surprise when he tossed the ball to James Vince ahead of frontline bowlers like Adil Rashid and Saqib Mahmood. That seemed to have worked as Vince got the edge of Andy Balbirnie after he seemed to have looked to pull the bat away at the last minute while attempting a cut. Vince, who bowled for the first time in limited-overs cricket, managed to pick up his first wicket in his very first spell.

Morgan then did turn to Adil Rashid, who bamboozled Kevin O'Brien with a googly in his very first over to bowl him for just three. Ireland had their backs against the walls and needed the middle and the lower-order to step up again, like they did in the first match. In a bid to do so, to Harry Tector and Lorcan Tucker built a steady partnership, but just when it was blossoming, Tector hit Rashid straight down the throat of mid-on for 28. Runs were hard to come by for Ireland as England were not just bowling tightly, but were throwing themselves around in the field as well, which made it all the more difficult for Ireland.

Rashid continued his impressive run as he dismissed Tucker for 21 after the batsman top-edged an attempted sweep. With that scalp, Rashid became the first-ever spinner from England to pick up 150 ODI wickets. He eventually finished with figures of 3 for 34 from his 10 overs to leave Ireland in a lurch.

The hero for Ireland in the first ODI, Curtis Campher looked to be Ireland's only hope of taking them to a respectable score. He put on a fifty stand with Simi Singh, who played his part quite well in the partnership. But he edged Mahmood to Bairstow behind the wicket for a well made 33-ball 25, bringing curtains to a 59-run seventh wicket stand. Campher was then joined by Andy McBrine with whom he put on 66 for the eighth wicket in the previous match and Ireland needed that in this match as well.

Campher got to his second ODI fifty in as many matches off 78 deliveries. This was also his third List A half-century in three matches, which gave Ireland a glimmer of hope. The Ireland all-rounder became the first from his country to score back-to-back fifties and also registered the highest score by an Irish No. 7. He then cut loose smashing Willey for three boundaries in an over, including a reverse scoop over slip. McBrine and Campher brought up their fifty partnership in just 35 deliveries as Ireland looked to get to at least 220. However, they had to settle for a few runs shorter than than.

While Willey did not have as good a game as he had in the first ODI, he still managed to finish with 2 for 48 from his 10 overs. Vince, Rashid and Mahmood too were among the wickets.

Earlier, Ireland won the toss and unsurprisingly, decided to bat first. As expected, Joshua Little came into the XI in place of Barry McCarthy, who has been ruled out of the series.

England too made on change in their XI. Tom Curran made way for Reece Topley, who makes his first appearance for England since 2016.