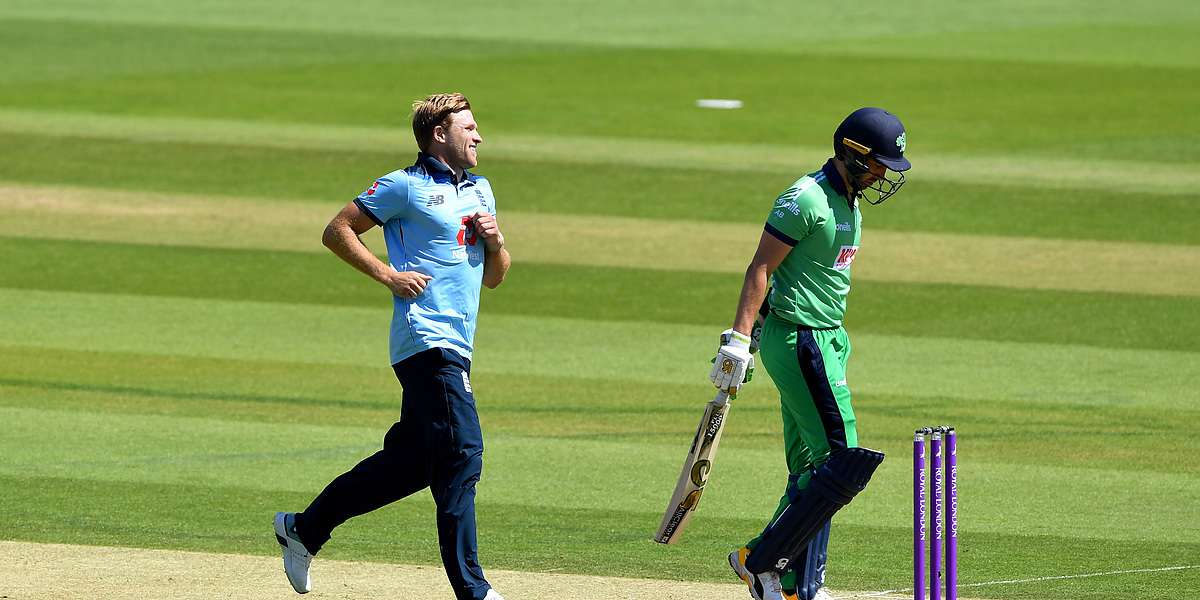 David Willey's brilliant opening spell put England in a commanding position in the early stages of the match and it was mostly one-way traffic thereafter.

Paul Stirling and Andrew Balbirnie have been Ireland's best batsmen recently, but the duo were both dismissed early on by Willey, who has returned to England's ODI XI after more than a year. The left-arm pacer first got the wicket of Stirling in the first over of the game, before inducing an edge from Balbirnie off the first delivery of his second over which turned out to be a maiden.

Despite the early fall of wickets, Gareth Delany began in positive fashion. The 23-year-old hit Saqib Mahmood for three consecutive fours and then scored back-to-back boundaries against Willey. But there wasn't much else that went the away team's way during the opening exchanges.

Mahmood soon got into the act, dismissing debutant Harry Tector for a duck. Willey then got the wickets of Delany and Lorcan Tucker off successive deliveries.

At the end of the first Powerplay, Ireland found themselves 37/5. Kevin O'Brien, the hero of Ireland's famous win against England in the 2011 World Cup, and Campher then put on a solid fifty-run stand to give the away side some respite.

But just as Ireland looked to be getting a partnership of substance going, O'Brien played an ill-judged shot against Adil Rashid and was caught at long-off. And four deliveries later, Simi Singh – eager to get off the mark when there wasn't really a run on – was found well short of his crease after being sent back by the non-striker.

Curtis Campher, just 21 years old, showed great maturity and became just the third Irish batsman to notch up a half-century on ODI debut. McBrine and him added 66 runs for the eighth wicket which helped Ireland well past the three-digit mark – something that looked uncertain earlier in the innings.

Among the duo, McBrine was more aggressive, hitting three fours and one six in his 48-ball 40. On the other hand, Campher was more circumspect and unbeaten on 59 at the end of the innings.

In reply, England didn’t get off to an ideal start, losing three wickets during the first Powerplay. This, despite Ireland being dealt a huge blow in the first over of the chase, with pacer Barry McCarthy injuring his ankle – he didn’t bowl in the rest of the innings.

The decision to bring spinner Andy McBrine into the attack as early as the third over worked a treat as he got the big wicket of Jonny Bairstow. The England wicketkeeper-batsman would have been keen to impress after missing out on recent Test squads, but it wasn't to be here.

Craig Young then dismissed Jason Roy and James Vince, both of whom got starts, during the first Powerplay. It’s not the first time that Vince has played such an innings in his ODI career so far and it will be quite frustrating for him to having not kicked on and got the big scores.

While Ireland might not have had the best of days, Campher continued to impress on debut. After his effort with the bat earlier, he took a wicket in his first over in international cricket, dismissing Tom Banton.

Before this match, Sam Billings last played an ODI in 2018 and would have perhaps not featured here if not for an injury to Joe Denly. While he might have been lucky to play, there was nothing fortunate about his batting as he played a measured knock to guide his team to victory.

Billings showcased his ability to score runs all around the ground and his unbeaten 67 here is his top score in ODIs yet.

England skipper Eoin Morgan played a supporting hand, scoring 36 not out with the fifth-wicket partnership unbeaten on 96. Morgan pushed himself down to number six in this game in a move designed to give the likes of Banton and Billings more time in the middle.

Despite the early hiccups during their innings, England got home comfortably in the end.

The two teams will meet in the second ODI of the series on Saturday at the same venue.