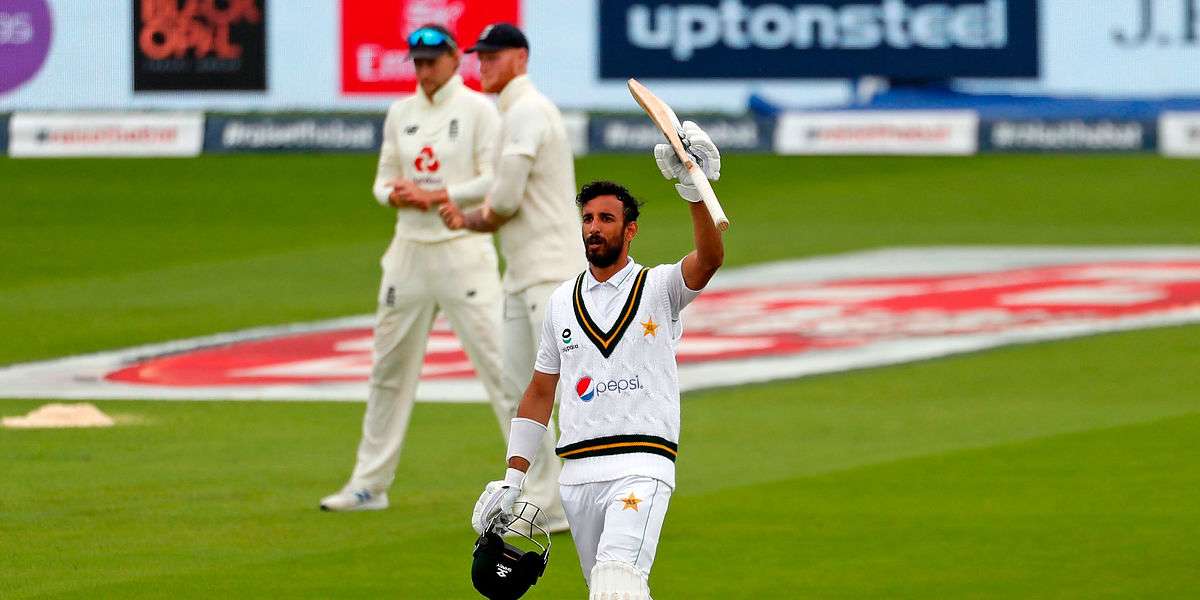 England have some heavyweight fast bowlers in their ranks. But, there is always a buzz about the Pakistan pace attack whenever they tour there. It is due to the exploits of their fast bowlers that Pakistan have not lost a series in England since 2010.

Contributing to that buzz this time are the 6’6’’ tall Shaheen Afridi and Mohammad Abbas, the highest wicket-taker from the last tour. One has to go back to the year 2000 when, playing against the West Indies at Lord’s, England lost three wickets at home for 15 runs or fewer. Inside six overs today, these two pacers from Pakistan had England three down for 12 runs.

These were two LBWs and a bowled, each dismissal more intimidating than the last. Falling across yet again with a superfluous front foot movement, Rory Burns was late to an Afridi outswinger in the first over. Saved by the on-field umpire, a review directed him towards the dressing room.

If Dom Sibley would have been around in 2018, he would have known the primary mode of attack for Abbas. In his natural batting style, he moved across to face a delivery that moved in after landing on the seam. Like for many of his compatriots in 2018, it was an Abbas special to which he had no answer to.

Even if Ben Stokes was around in 2018, there is very little he could have done with a delivery that he received in Abbas’s next over. Facing him while he was bowling from around the wicket, Stokes appeared to cover the angle of the ball on a forward defence. Only for it to fool him after pitching and moving enough to miss his outside edge and hit the stumps. It will be stressful for the memory to think of the last time when Stokes contributed with neither the bat nor the ball.

Joe Root appeared to be batting on a minefield. Saved by the review on an early LBW call, he got off the mark on the 22nd ball. Till the introduction of Yasir Shah, Root had moved to 3 off 46. As his innings seemed to gather some momentum after two sweeps against Yasir, it hit a roadblock after a tickle to the keeper on an attempted cut.

After Babar Azam yesterday, it was Ollie Pope today to throw his name among the upcoming greats. Scoring 46 off 67 balls when every batsman around him struggled, Pope now seems England’s only hope.

After Afridi and Abbas had derailed his side, Pope did not allow the quickest bowler of the day, the 17-year old Naseem Shah and Yasir to dictate. Solid on the drive and pull, he hit Naseem for four boundaries while unsettling Yasir with strike-rotation.

In the final session of the first day, the umpires did not allow the pacers to operate. After lunch today, England bowled with spinners at both ends by choice.

The move to operate with Joe Root and Dom Bess from both ends that seemed bizarre. It proved to be a tactical blunder. Pakistan scored more runs in the first 10 balls of the session than in the first eleven overs of the morning. Until the second new-ball arrived, Pakistan had already added 27 runs in five overs. By the tenth over of the session, they added more runs than in the full first session

Shadab Khan and Shan Masood’s street smartness worsened England’s questionable tactics. In a courageous display of intent, they deployed the drop and run strategy to outfox the English bowlers.

In the first 20 overs of the session before Shadab’s dismissal, the pair rotated the strike atleast once in 17 of them. In one of the remaining three, they converted an attempt for a quick-single into two overthrows, while Masood hit two boundaries in the other. To turn the table int heir favour after a gloomy morning, the pair added 94 runs in these 20 overs.

Shedding his ultra-defensive approach, Masood scored 74 runs at a strike-rate of 83.1 in the session. Joining an elite company, he completed a century in third consecutive innings. The first for a Pakistan opener in England since Saeed Anwar’s 176 at the Oval in 1996.

After the pair added a 105, Shadab could not contain himself as he hoicked him to Root at mid-on. Not before he scored a crucial 45 in an innings that changed the momentum early in the session

While it was the performance of England’s bowlers let them down in the afternoon session yesterday, it was their tactics that hurt them today. If Jofra Archer had to come in to bowl in the 19th over of the second new ball, one wonders why Root opted to bowl himself at the start of the session.  And why it was Chris Woakes who was he preferred choice for the short ball tactic ahead of Archer?

After his introduction, Archer was effective immediately. First, he caught Yasir Shah in front and had Mohammad Abbas caught at slip on the next ball.

This prompted Masood to shed any caution and dominate Bess with a 16-run over. None of the Pakistan 9, 10 and 11 average more than their batting position. It will not be long before England is out to bat again. If not for some brave batting and casual planning, they would have been out there already.

If England bowling was ‘absolute pants’ on the first day, it was tuxedo-clad on the second morning. Yesterday, Babar Azam added 48 runs in 44 balls in the afternoon session. Today morning, Pakistan added 48 runs in 26 overs. Add to it three wickets taken by three England bowlers and you realise how purposeful England attack was.

The series against the West Indies made the English bowlers get into the habit of attacking the stumps. A strategy that did not quite work against Pakistan on the first day. Today morning, there was an obvious shift to the traditional ‘top of off’ bowling. And the rewards were immediate.

Babar’s innings, decorated with solid defensive and delicious strokes, ended in the first over of the morning. James Anderson lured him into a drive to an out-swinger to which he resisted once but could not do so twice.

Babar’s dismissal dried up the runs for Pakistan. First eleven overs of the morning yielded only eleven runs. Pakistan batsmen played out 41 dot balls either side of Asad Shafiq’s dismissal. In a probing eighth over of the morning, Broad forced him to play every ball, one of which bounced a tad more and led him to edge to the second slip.

Saved by a faint edge detected by the snickometer, both Masood and Mohammad Rizwan survived an LBW shout each. In his 41-ball stay, Rizwan looked uncomfortable and played away from his body far too often. On a perfect outswinger from Chris Woakes, the habit of throwing his hands forward with the feet stuck to the ground resulted in his demise.