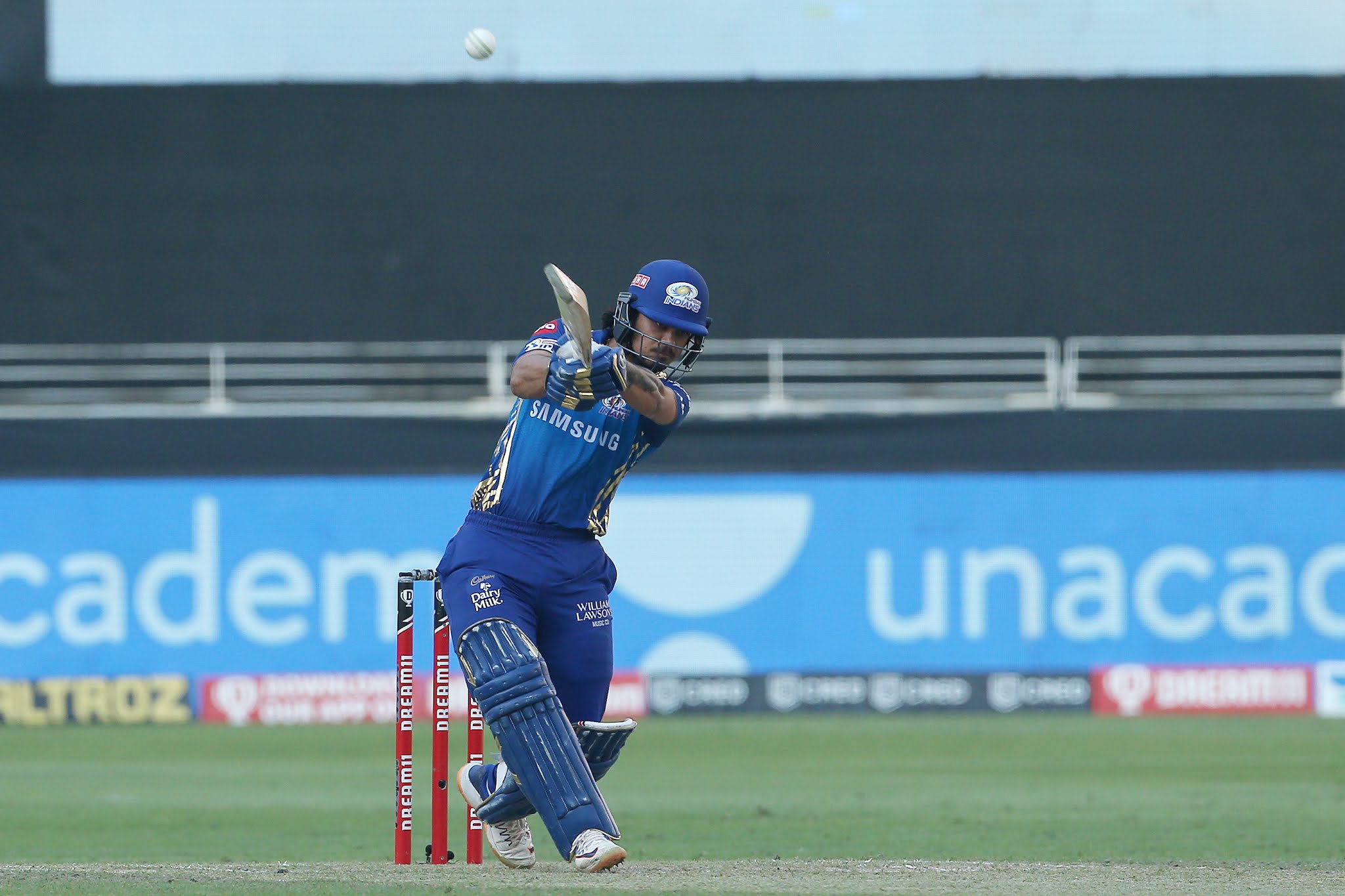 On the back of superb individual performances from Boult, Bumrah and Kishan, MI secured their ninth win of the season

Mumbai Indians (MI) have confirmed a place in Qualifier 1 after cruising to a nine-wicket win against Delhi Capitals (DC) at the Dubai International Cricket Stadium on Saturday (31 October 2020).

The Capitals have had troubles at the beginning of their innings this season and that was there to be seen once again here as Shikhar Dhawan was dismissed for his second successive duck. This is the seventh time that they have lost a wicket in the first over in IPL 2020, which is more than 50% of their matches this season, easily the highest among all teams.

It was no surprise to see Trent Boult grab that early wicket as he's been magnificent during this stage of the innings. The New Zealand pacer struck once again in his second over, sending the returning Prithvi Shaw back to the pavilion for 10. It was all one-way traffic from thereon-in as MI remained in complete control throughout.

Unsurprisingly, no bowler has taken more wickets during the Powerplay this season than Boult (12). 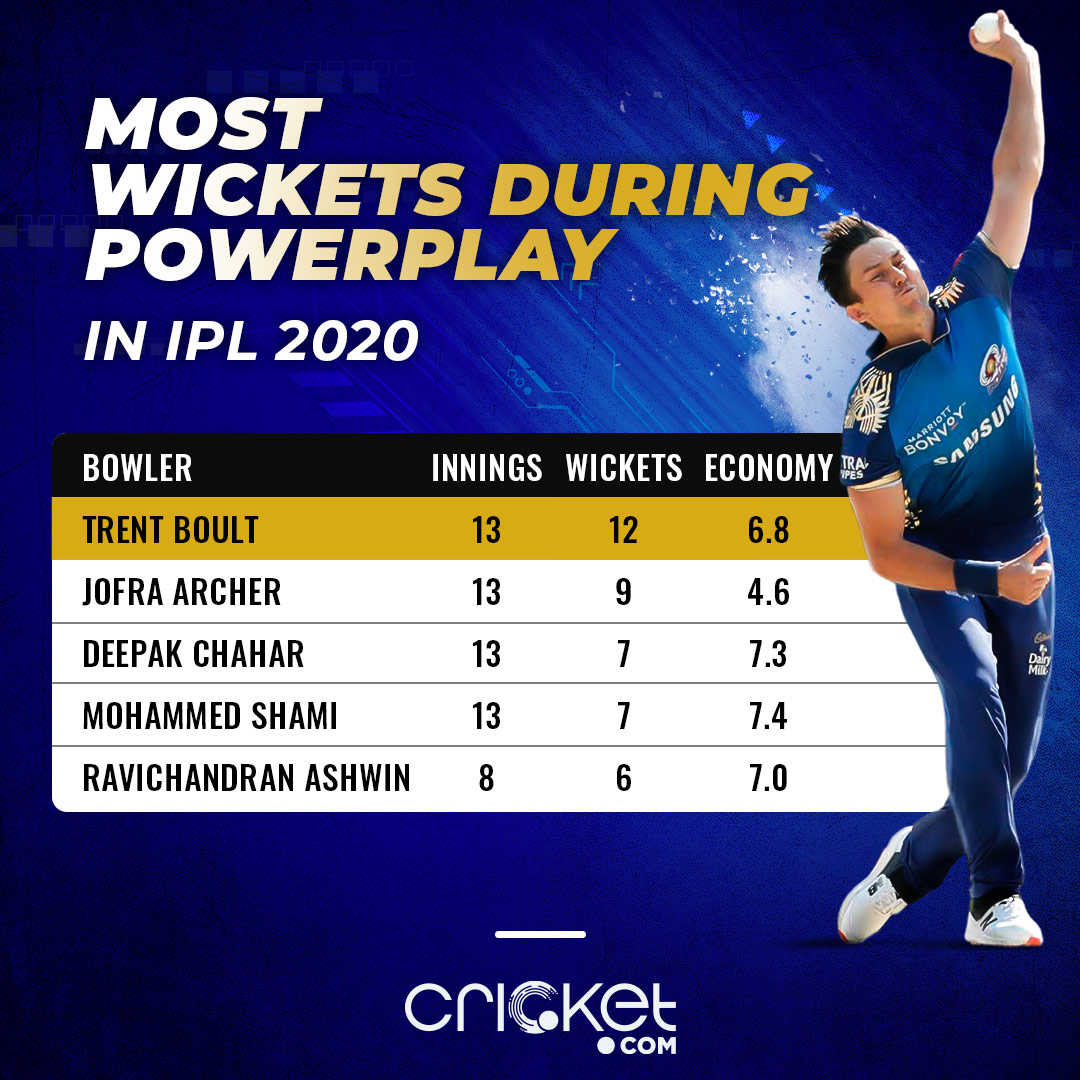 DC managed only 22 runs for the loss of two wickets when the fielding restrictions were on, the second-lowest team score in the Powerplay in IPL 2020 thus far.

After the loss of two early wickets, the need of the hour for DC was a solid partnership. Shreyas Iyer and Rishabh Pant ensured that there wasn't further damage until the halfway mark of the innings, but soon after, the former was dismissed by a brilliant piece of wicketkeeping by Quinton de Kock.

Iyer's back foot came off the ground only briefly, but it was enough time for de Kock to complete the stumping. The South Africa wicketkeeper had stumped Josh Philippe in similar fashion just a few days earlier against Royal Challengers Bangalore. It was Rahul Chahar with the wicket.

MI had the luxury of not bowling Jasprit Bumrah until the ninth over here and saving his overs proved to be a smart tactic. The India pacer's second over was sensational as he got the crucial wickets of Marcus Stoinis and Pant.

MI have usually tended to save a couple of Bumrah's overs for the death, but with DC in disarray, captain Kieron Pollard decided to give him his third over. It proved to be a masterful move as Bumrah got his third scalp, dismissing Harshal Patel for 5.

Harshal was unfortunate as replays showed that the ball was missing the stumps after he was adjudged leg-before-wicket. DC, though, didn't have any reviews left with Pant having used it unsuccessfully earlier.

Shimron Hetmyer was DC's last batting hope as he was the only specialist batsman at the start of the 16th over. But his stay at the crease didn't last long thereafter as he was dismissed by Nathan Coulter-Nile while attempting a big shot to get the scoring rate up.

Boult then returned and got his third wicket, dismissing Ravichandran Ashwin off the penultimate over of the innings.

Bumrah and Boult accounted for three dismissals each and they have been the backbone of Mumbai’s bowling efforts this season, with both picking up 20+ wickets in IPL 2020 thus far. Bumrah, in fact, holds the Purple Cap currently after equalling Kagiso Rabada at the top of the wicket-takers list with a better economy rate than the South Africa pacer. 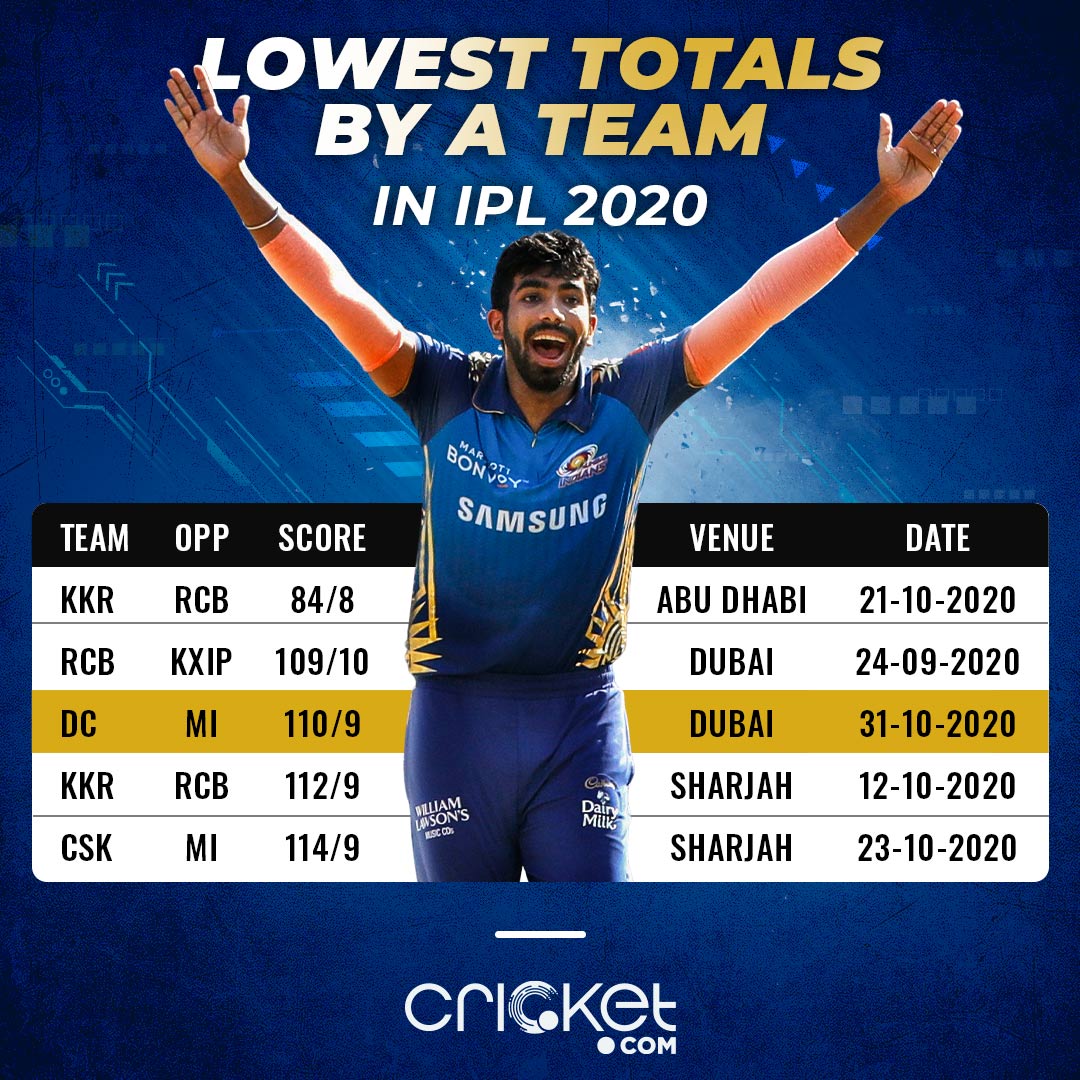 KISHAN SHINES WITH THE BAT

Pursuing a modest target of 111, Ishan Kishan played a fine innings to ensure that there were no worrisome moments for the four-time IPL champions during the run-chase.

The 22-year-old notched up his third half-century of the tournament and one of the more impressive aspects of his batting was his aggressive approach against Anrich Nortje and Rabada. While most players would be happy to just play them out, Kishan scored 34 runs from just 16 deliveries against the two South African quicks.

Kishan was well supported by de Kock and the duo put on a 68-run stand for the opening wicket which, more or less, sealed the deal for Pollard's side after their bowlers had done a splendid job earlier in the day.

While MI have confirmed a place in the top two, this is DC's fourth consecutive loss and their net run-rate has dropped to -0.16 which will be a concern for them.