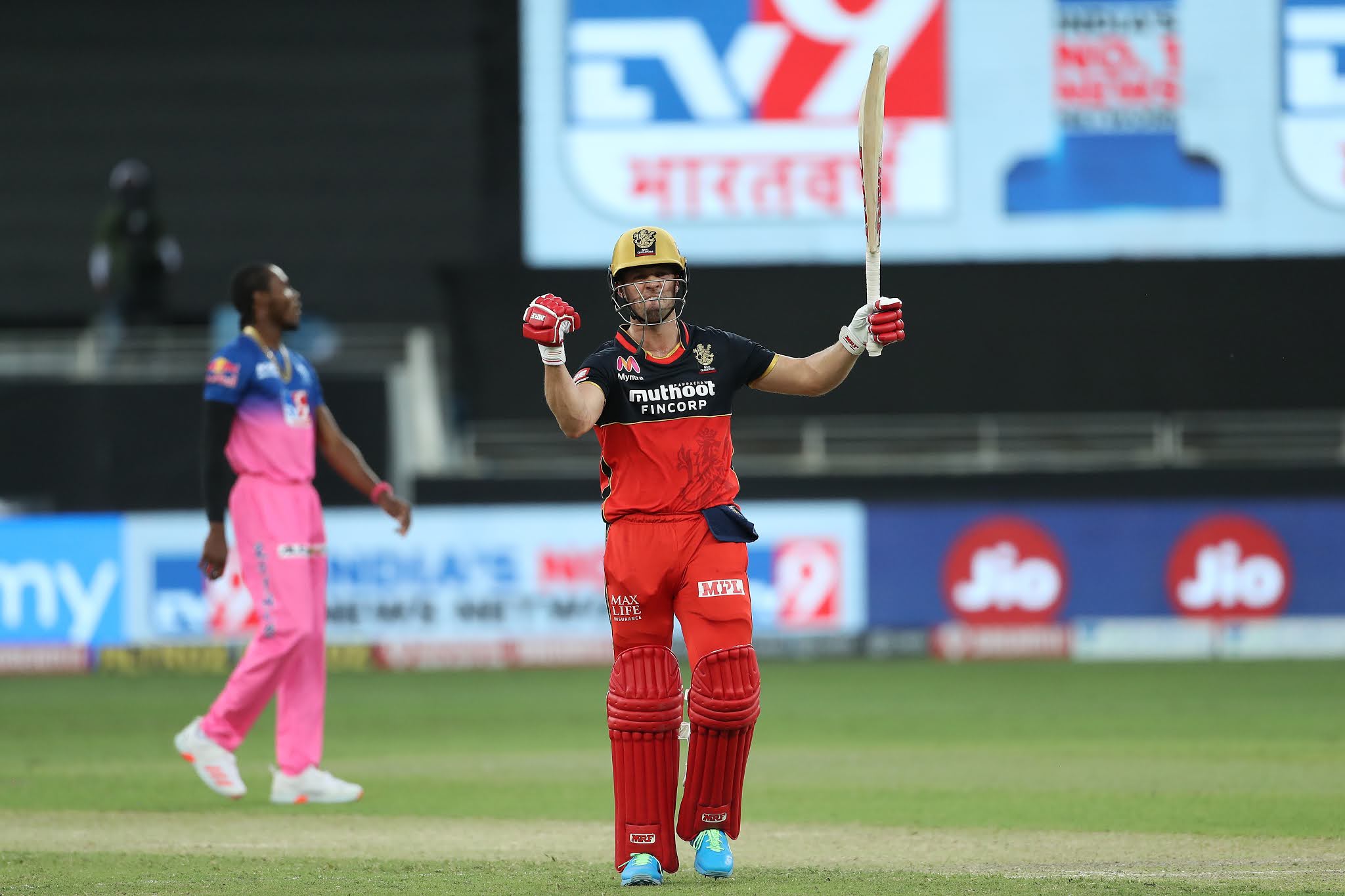 The world belongs to ABD, we just live in it

The genius prevailed yet again. It is tough to pen an adjective to the brilliance of AB de Villiers. Yet again, while the others struggled around him, he appeared to be batting in a different environment.

RCB’s top-order failed to get any momentum in their chase. Chasing 178, RCB appeared to have bottled up the reply with 64 needed in the last five. But, it was their precious gem who helped them cross the line once again with a 22-ball 55*.

There were six sixes from him, three of which came off consecutive balls by Jaydev Unadkat in the 19th over. Even the longer boundaries on the leg-side were not a hindrance to his attack against the left-armer.

The South African started the death-over phase on a high, hitting Jofra Archer for a six on the leg-side. The pressure transferred back to RCB as Gurkeerat Singh, batting for the first time in this tournament, played three dot balls in a row in the next over by Unadkat. Releasing the steam, de Villiers used the shorter boundary well and hit Unadkat over sweeper cover for a six in that over.

With RCB needing 45 in the last three, RR's best fast bowler on the day, Kartik Tyagi bowled another good over that went for a decent 10 runs. Executing his yorkers well he did not allow de Villiers to clear the ropes.

It was then de Villiers sucked the life out of the chase with three sixes in a 25-run 19th over. He then finished the game in the next over by dispatching a ball from Archer on his pads to the shorter leg-side boundary. 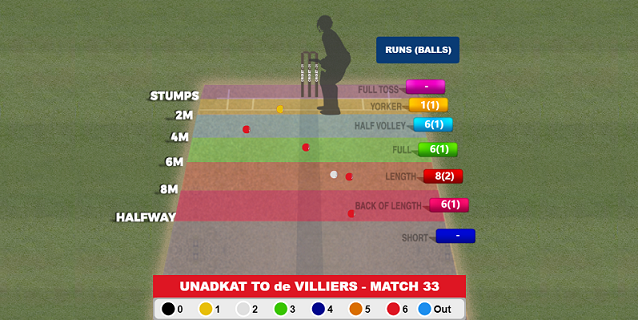 After a middling start to the innings, RCB were 47/1 at the end of the Powerplay. They lost Aaron Finch early who has failed to make a lasting impact in this tournament so far. In what has been a similar story this year so far, RCB's run-rate tanked after the field spread. Even after eight wides and one no-ball in that period by Rajasthan’s bowlers, RCB managed to score 67 in the nine overs in the middle-phase.

Devdutt Padikkal struggled to get any boundaries as he scored 16 runs in 21 balls in the phase. There were only two boundaries in the nine-overs, both hit by Virat Kohli who hit the two leggies – Shreyas Gopal and Rahul Tewatia - for two sixes.

An agitated Kohli tried to push Padikkal to run between the wickets but the rookie rightly held his ground.  On multiple occasions, Kohli had to run back to his crease after committing on singles or twos that were not there. While the pair struggled to hit the leggies, they failed to maximise in Tyagi and Unadkat's overs as they went for 14 in their three overs in this phase.

To make matters worse, both were dismissed off consecutive balls albeit in different overs. Failing to get any timing against spin on the day, Padikkal mistimed a pull off Tewatia to long-on on the last ball of the 13th over. Kohli fell on the first ball of the next over, bowled by Tyagi. Looking to whip a full ball on his legs to the shorter boundary, he failed to clear Tewatia at deep midwicket. After pitching in with bat and ball, he contributed in the field as well with a spectacular effort on the fence. Tyagi finished with a two-run 14th over as RCB were left at the mercy of their best batsman. 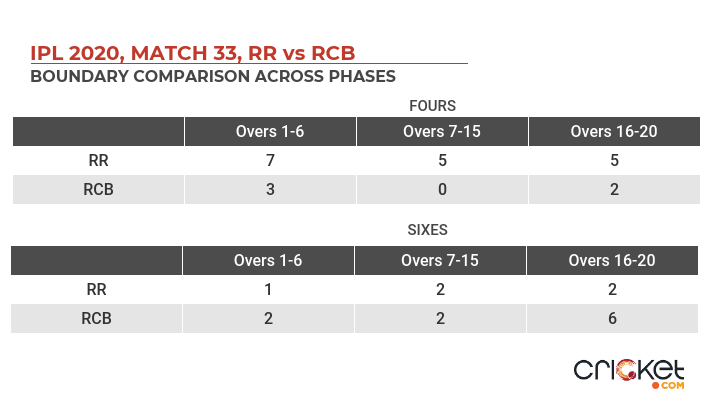 Uthappa reminded of his glory days

In their ninth game of the season, RR had a fifth opening pair. This time Robin Uthappa walked in at the position he is most comfortable with. Partnering him was Ben Stokes and not Jos Buttler, RR's most successful opener in recent times.

Uthappa got going in the third over. He slammed Sundar for four boundaries in the over.

With straight fielders inside in the next over, Uthappa used the short straight boundary to good effect. Not allowing Isuru Udana to settle-in, he hit him for a four and a six to the long-on fence.

Morris then ensured that RCB finish the Powerplay on a high. Attempting a hook off a short ball from Morris, Stokes gloved the ball to AB de Villiers behind the wicket. However, the new pair had given RR their first half-century opening stand this season.

Continuing the momentum after the Powerplay, Uthappa hit Saini to two boundaries in the seventh over. The first smashed past extra cover and the other to vacant mid-wicket boundary on the longer side. Yuzvendra Chahal cut short his explosive 22-ball 41 as he mistimed a slog-sweep to the fielder at deep midwicket.

After Samson’s brain fade, Smith rises from a slump

With two wickets early on in the middle-overs, RCB put the brakes on RR's scoring rate. Failing to play as per the match-situation, Sanju Samson let his side down yet again.

First, he welcomed Chahal with a mighty 94-meter hit to cow corner. This was reminiscent of some of his sumptuous hits against spin early this season. Then, after he came back to the strike as the batsmen crossed over on Uthappa's dismissal, he went for the tossed-up ball and could not clear long-off.

Facing the hat-trick ball, a wicketkeeper-batsman of similar aggressive intent, Buttler, left the next ball to take the battle into another over.

The spin trio of Chahal, the debutant Shahbaz Ahmed and Sundar then bowled some quiet overs.  After the two-wicket eighth over from Chahal, they gave away 34 runs in the five overs from 9 to 13. Chahal continued to tease the batsmen with his loopy leg-spinners bowled wide of the stumps. Though Buttler did try to attack Ahmed and hit for a four and a six in his two overs.

Steve Smith got himself among the boundaries after he made full use of Udana's poor deliveries. With the off-side field inside the circle in the 15th over, Udana bowled too slower balls short and wide which Smith hit for boundaries with ease.

Smith started the death overs phase on a high. Using the shorter boundary on the leg side, he whipped the first ball of the 16th over from Morris for a six. However, Buttler fell two balls later, mistimed a full ball to Saini hovering on the circle on the off-side.

After a superb game till then, Chahal finished with an expensive last over. He went for 19 in the 18th over of the innings that included two front-foot no-balls. Twice in that over, Smith reverse swept him past point for four. He brought his fifty on the fourth ball of the over, hit down the ground for four.

Tewatia then used his expertise to hit pace well. He clubbed Udana for a six and a four in the next over. The six came off his trademark whip over the mid-wicket fence on a low full toss.

Morris then ensured RR did not end on a high with a 4-run over that also included two wickets. He finished with spell of 4/26, the third best of the tournament.

Bowling full and outside off to let the pair use the shorter boundary on the onside, he had Smith caught at sweeper cover. The debutant, Ahmed took an exceptional diving catch to curtail Smith for a 36-ball 57. 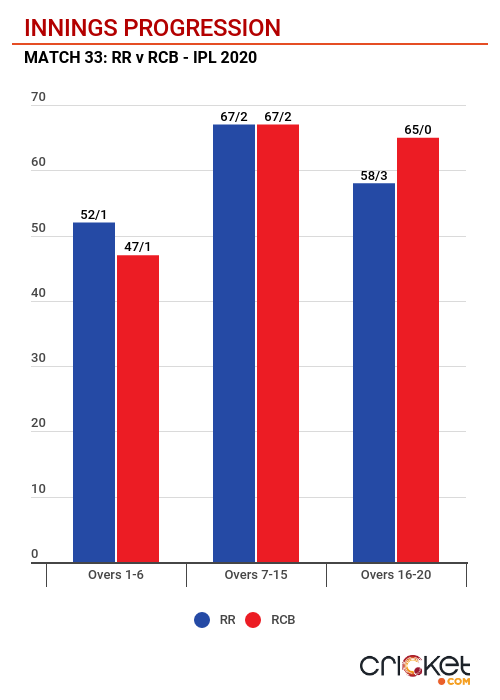 The magic of de Villiers soured Smith’s comeback to form. On a day when three best batsmen of their era were on the field, one of them stood out yet again.

In hindsight, bowling 11 wides was an unacceptable execution from RR's bowlers. Also, opting to not have Archer bowling the 19th over ended up being a big mistake.

At the end, the only fitting way to acknowledge de Villiers' performance is to reiterate what Mark Taylor once said about an opposition batsman: "RR did not lose to a team called RCB, they lost to a man called AB de Villiers".