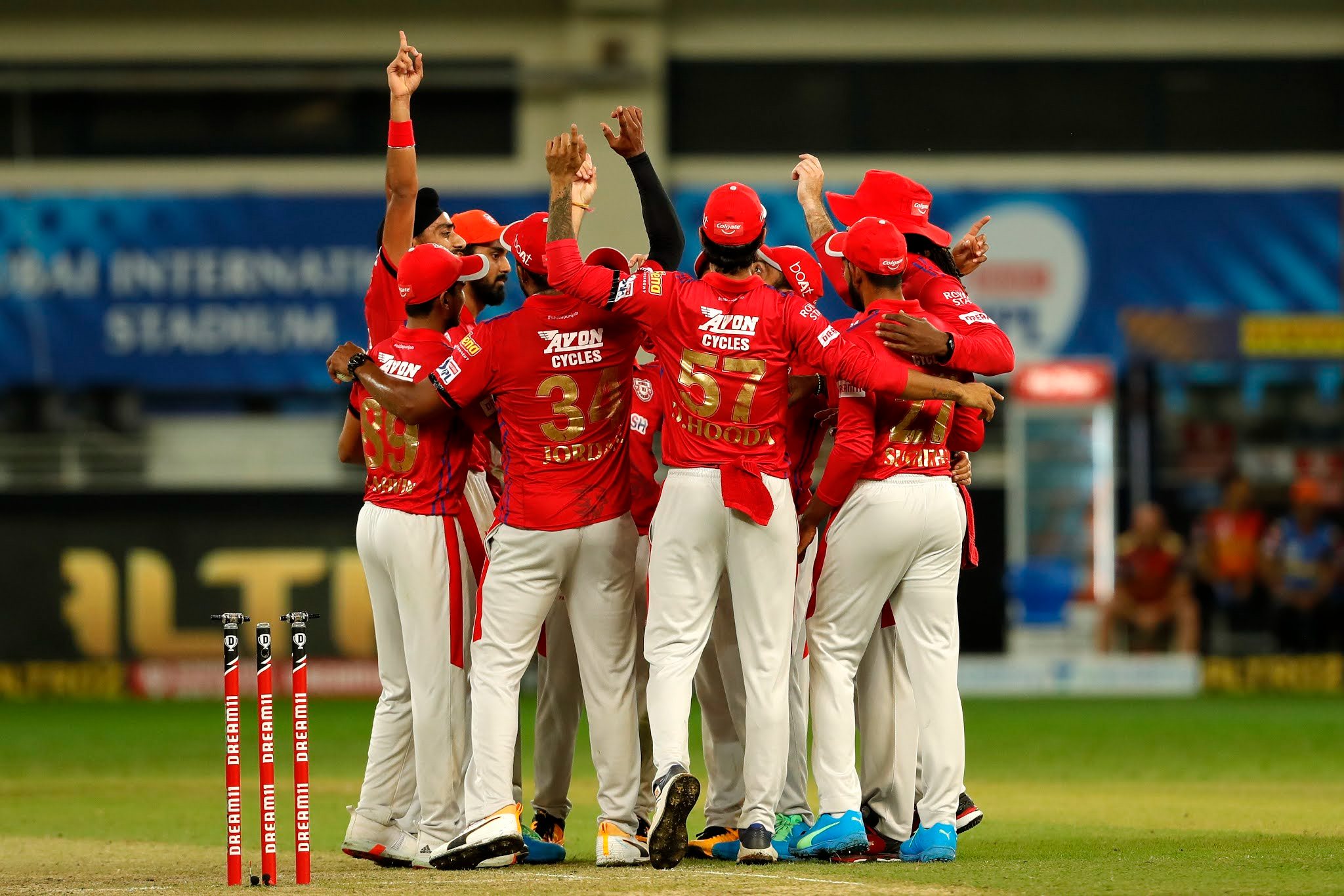 In a batting collapse of the highest order, Sunrisers Hyderabad snatched a defeat from the jaws of victory, thus gifting Kings XI Punjab two points at a crucial stage in the league. KXIP, on the other hand, got a taste of what it feels like to be on the other side of such bottled run-chases.

At the 16th over mark in the chase, SRH had the finishing line in sight. They needed 28 to win with the experienced duo of Manish Pandey and Vijay Shankar at the crease, having faced over 20 balls each.

This is when Chris Jordan set the ball rolling with a touch of brilliance from an individual who was not a part of the XI. Pandey tried to loft Jordan over his head for a maximum but found the substitute fielder Jagadeesha Suchith on the ropes. Sprinting towards the ball, Suchith timed his jump to perfection to end Pandey’s stay at the crease.

Next over, Shankar was sent packing by Arshdeep Singh. The fist pump by KL Rahul behind the wickets suggested that SRH were in trouble and trouble it was. There were only 3 runs in the over which transferred all the pressure on SRH’s underwhelming lower-order on a slow pitch. 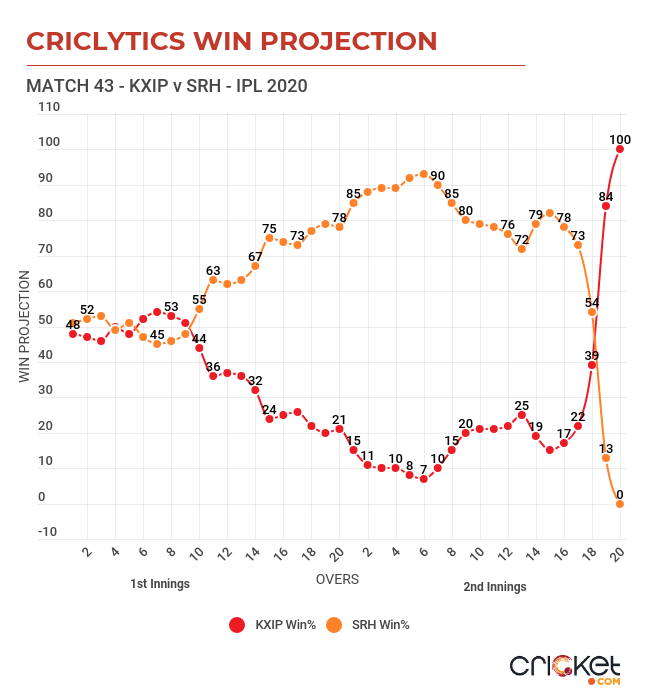 Jordan gave the killer blow in the 19th over, dismissing Jason Holder and Rashid Khan off consecutive deliveries. Moreover, the over only produced 3 runs bringing the equation down to 14 runs from the last over.

It was a mountain to climb for Priyam Garg who had till then faced only three balls in the innings. SRH lost the three remaining wickets in the over and Khaleel Ahmed’s run-out to finish the game with a ball to spare summed up their capitulation.

Chasing a modest 127, SRH had the desired start. David Warner and Jonny Bairstow razed down more than one-third of the target in the Powerplay itself without being separated. Warner was particularly severe on KXIP’s biggest asset with the ball - Mohammed Shami. Warner scored 22 off the 13 balls he faced from Shami in the Powerplay.

Bairstow looked scratchy at the start but gave ominous signs of what could come when he swept Murugan Ashwin with disdain either side of the pitch in the sixth over.

The sign of the pitch helping the spinners was evident during Rashid Khan’s spell of two for 14 during the first innings. KXIP had two legspinners in their ranks to pull the plug on SRH’s run-scoring.

While Ashwin troubled Bairstow (except the aforementioned sweeps) during the Powerplay, it was Ravi Bishnoi who broke the opening partnership. Brought into the attack in the seventh over, he removed Warner with his second delivery in the contest. Next over, Ashwin lit Bairstow’s stumps finally beating him on the drive. The move to promote Abdul Samad to four did not work either as SRH stuttered to 67 for three from 56 for no loss.

Shankar and Pandey scored only 30 runs from the remaining 37 balls of the middle-overs (overs 7 to 15). Ashwin and Bishnoi's combined bowling figures read 8-0-40-2.

A similar tale for KXIP

Much like SRH, KXIP’s innings also faltered after a sedate start. As it is always the case in a T20 innings, it was important for KXIP to have one of their top three bat deep. With Mayank Agarwal not available for selection tonight, the onus was on KL Rahul and Chris Gayle.

However, it was not the case and both the batsmen were dismissed off consecutive deliveries around the halfway mark in the innings. Gayle was pouched by Warner at long-off to the last ball of the 10th over. Next ball, Rashid Khan castled Rahul with a stunning googly hitting the middle-stump.

The dismissals jolted KXIP's progress. Glenn Maxwell tried to fight his poor form and build a partnership with Nicholas Pooran but perished scoring 12 off 13 balls. Rashid backed it up by sending back Deepak Hooda for a duck. There were only 41 runs scored during the middle-phase of their innings. 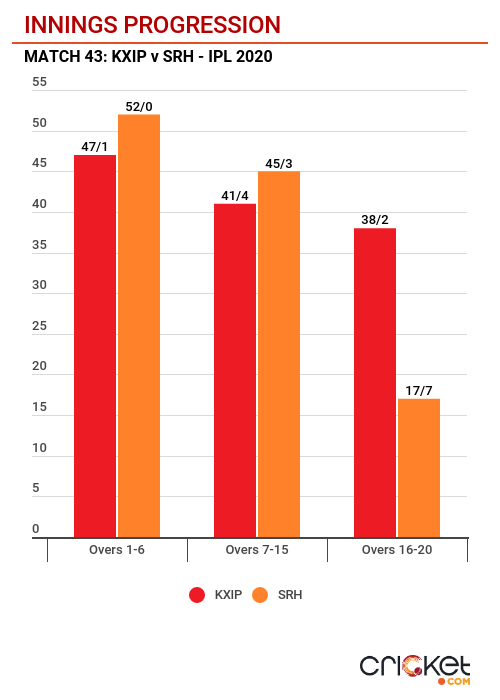 Pooran, instead of going hell for leather as he usually does, opted to bat through as the only specialist batsman left. His approach turned out to be the difference as it stretched KXIP’s total to 126, even though there were only 38 runs at the death.

What does the result mean for both teams?

The outcome of this game is a major blow to SRH’s chances of making it to the Top 4. Though, they are still in the hunt. A positive net run-rate can come to their rescue but they now need to win all their remaining three games to make that count.

On the back of their fourth win in a row, KXIP have boosted their chances of a Playoff qualification to 42 percent on the Criclytics predictor.