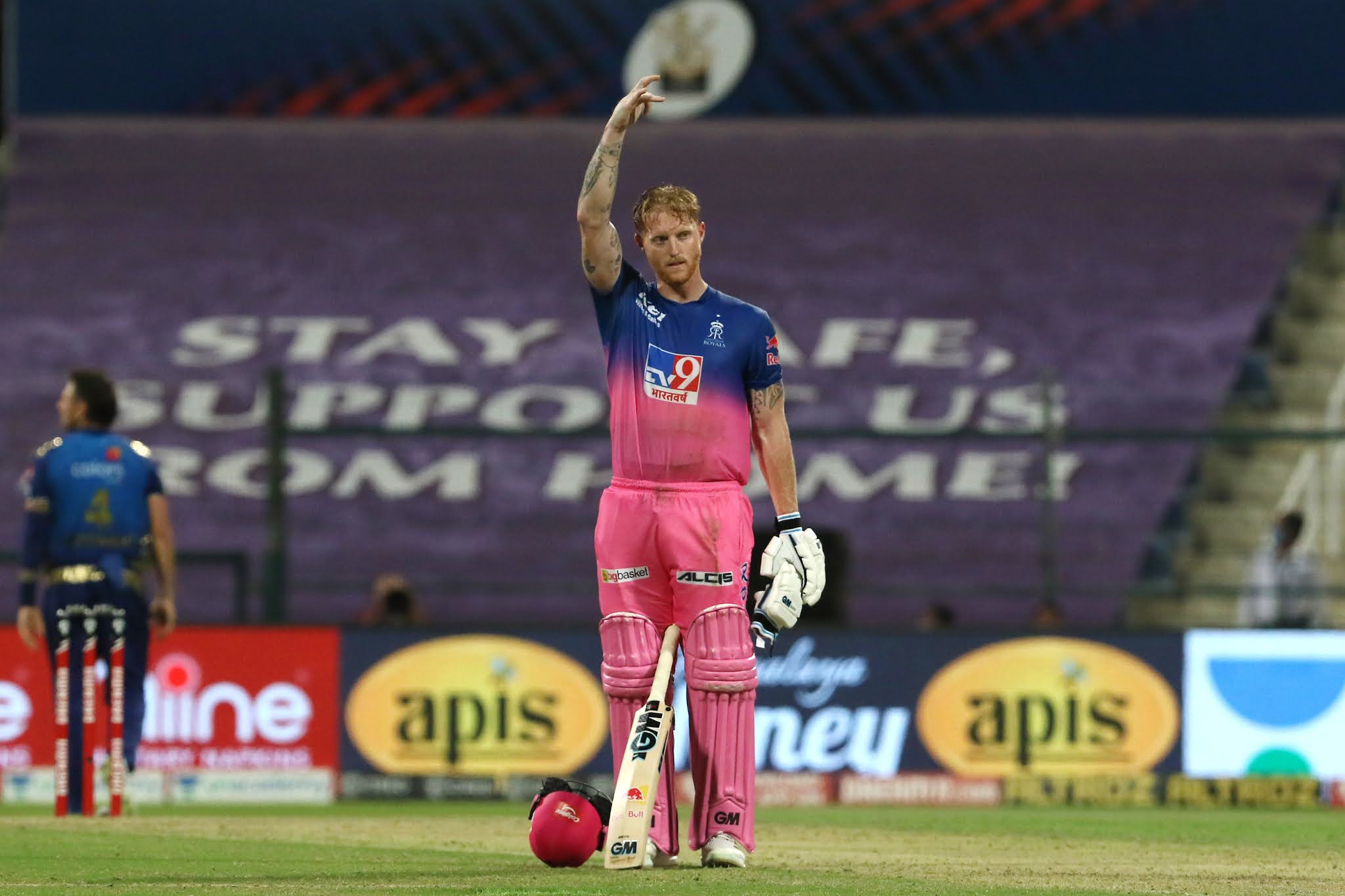 Mixing maturity with calculated aggression, Samson hit a fifty as well to stitch an unbeaten 152-run stand with Stokes

Ben Stokes is a player who is never shy to openly disclose his high expectations from himself. In one of the best run-chases this season, he saw his side through with his second IPL hundred. His first in a Rajasthan shirt.

Though, when it was all over, Stokes admitted that this knock was bitter-sweet as it took him this long to score big for his side.

It is true that this epic chase might not be enough to see RR through to the playoffs. It is true that it is the foreign boys who have let them down this season. But, there is no discounting the fact that yet again Stokes proved himself a big-match player, playing a chanceless innings against probably the best bowling unit in the tournament.

With a thumping partnership of 152*, Stokes and Sanju Samson never allowed Mumbai bowlers a sniff in the game. While Stokes is used to winning such games for his side, it was great to see Samson stepping up and playing with an approach of being there at the end. Something that he planned for while as he mentioned after the game.

Having batted with a strike-rate of around a 100 in this tournament before this game, Stokes started with purpose. Displaying his array of shots, he hit Trent Boult for four boundaries in the third over. Covering a semi-circle from square leg to the cover fence, these shots came in different directions.

While the Royals lost two wickets, that of Robin Uthappa and Steve Smith, in the Powerplay, they managed to be near the asking rate, scoring 55/2 in the first six. Most of these runs were from the blade of Stokes but the two dismissed batsmen did hit a couple of boundaries each.

As the field spread, it made no difference to neither Stokes nor his partner, Samson, who displayed a rare show of maturity mixed with calculated aggression. The two batsmen added 102 runs in the nine middle overs that ended up being the difference between the two sides. 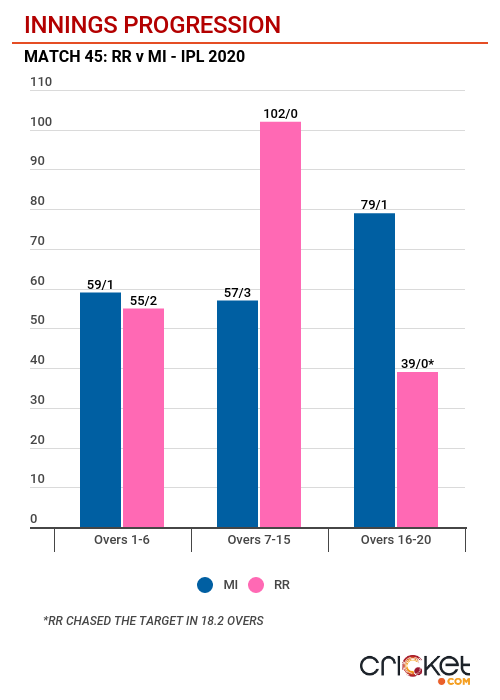 Stokes continued to build on his momentum from the Powerplay to hit 41* off 29 in the middle-overs. He used his slog sweeps and reverse sweeps with perfection to not allow the spinners to settle.

Starting with caution, Samson was 19 off 18 balls at one point in time. He went on the offensive with a trademark six down the ground against James Pattinson in the 13th over. He then slapped Rahul Chahar for two sixes in the next over. After tickling Jasprit Bumrah for two fours towards fine leg, he ended up scoring 54* off 31 balls at the end of the innings.

The best part of their partnership was that they managed to play Bumrah off scoring 18 off his two overs in the middle phase while attacking the other bowlers. After the 16th over began, it took them just 20 balls to score the remaining 39 runs and achieve the highest target ever by any side against the Mumbai Indians in IPL.

While MI might be missing the presence of their captain, but there is little doubt that there is a fresh intensity at the top of the order.

Even with Jofra Archer delivering fireballs, their top-order managed to target other bowlers to get to their best Powerplay score this season, 59/1.

It started with RR edging in front in the first over. With two slips in place, a pumped-up Archer started with 147kph ripper against Ishan Kishan. An outside edge flew wide off the second slip. Two balls later, he committed a fatal error of bowling short to Quinton de Kock who clubbed him for a six.

But, with a spring in his step, Archer won the battle with a length ball angling away next. An indecisive de Kock played it back on his stumps.

Like RR's story this season, there was a substantial drop in quality from the other end. After facing Archer, Ankit Rajpoot was a relief for MI batsmen on pace and accuracy. Bowling regular boundary balls, he got hit for three fours in his first two overs. Erring to a short length with a fine leg up, both Kishan and Suryakumar Yadav belted him for a six each behind square in his third.

After a sedate tournament so far, Shreyas Gopal brought RR roaring back in the match with a two-wicket over. As a result, MI could manage only 57 runs in overs 9-15, their lowest in the middle-phase this season.

After a bad start in the Powerplay, the inspiration that RR needed came in 11th over when Kishan attempted the upper-cut to a short ball from Kartik Tyagi. Archer, fielding at third man, misjudged the ball initially but then jumped in the air to use his height and plucked the ball with his right hand.

Gopal delivered the twin blow in the 13th over. Trying to clear the straight boundary, Surya failed to clear Stokes at long-off.

Two balls later, Pollard stayed back to a googly bowled at a good length. It sent him packing as the ball crashed into his stumps.

Hardik Pandya put his hand up

So far this season, MI have found a different hero for every game. Such is their squad that on any given day, any of their top seven is will prove too much for the opposition with the bat. Tonight, it was Hardik Pandya's turn.

After a sedate middle phase, MI needed a big finish. In the end, they managed to soar beyond their expectations as Hardik admitted later. Even with two of the five overs that went for five and three, MI managed 79 in the death overs (overs 16-20).

It started with Saurabh Tiwary proving his worth and targeting Archer with 17 runs in the 17th. It included a highlight-worthy hook over the leg-side fence behind the stumps.

After that, it was the Hardik show. Rajpoot already had a day to forget having given 33 in his first three overs. A barrage of full-tosses resulted in a 27-run over in which Hardik hit him for four sixes.

Archer came back in the 19th over and scalped Tiwary in a 3-run over. Unlike Rajpoot, Tyagi had impressed in his first three overs.

However, the youngster could not handle the pressure created by Hardik and lost his channel to Hardik's unorthodox stance. He used his power well to hit balls bowled at a length outside off to collect three sixes and two fours as MI finished with another 27-run over.

As it turned out, a score that MI felt was more than what they targeted for proved to be at least 20 short for Stokes and Samson.

The decision at the toss

Winning the toss, Pollard opted to bat first. However, in Abu Dhabi, in the last five games before this, that were decided in the standard 40-overs, the chasing side had won four. In the end, batting in the second innings seemed easier on the night, as Pollard admitted himself later.

A win for MI would have secured their top-4 place with 16 points. As it stands now, with DC, MI and RCB losing their games this weekend, the league stage of IPL 2020 is wide open. The only certainty is that after Royal's victory tonight, CSK are out of IPL 2020. Thus ends their rich legacy of never being out in the league stage itself. 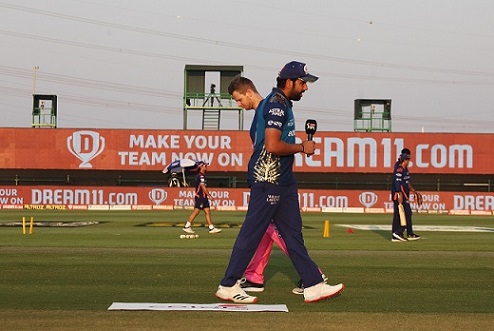