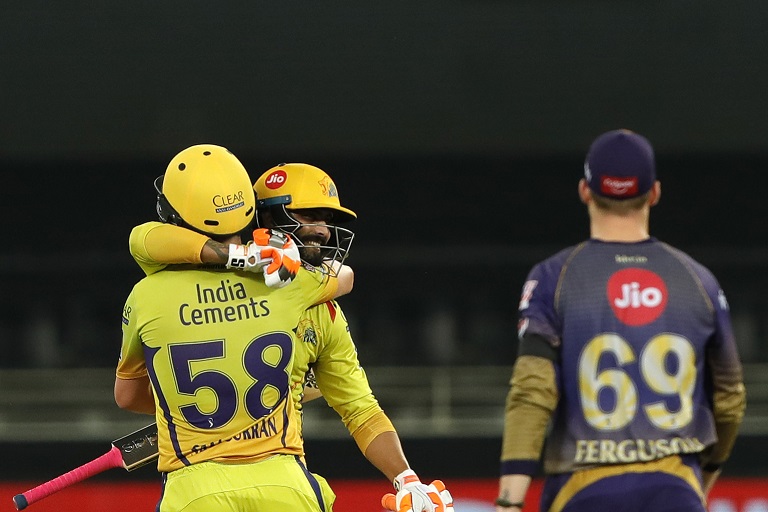 In what was a must-win game for all practical purposes, KKR failed to defend 30 off the last two overs

It was a game that exchanged hands on multiple occasions. During both innings, the batting side lost the earlier held initiative somewhere during the middle-overs only to come back strong at the death. As it turned out, CSK prevailed, helped by momentum from two top-order batsmen, the inexperience of KKR bowlers and dew.

Sent in to bat, KKR enjoyed their best Powerplay this season. Then they hit a slump in a reminder of CSK’s glory days when they used to choke opposition with spin in the middle-overs. Their ex-captain and a career-best knock from Nitish Rana brought them with a strong finish in the death overs.

After losing Shane Watson, CSK appeared to be cruising on the back of their newfound gem Ruturaj Gaikwad and Ambati Rayudu. A rush of blood from Rayudu and a superlative over each from Varun Chakravarthy and Pat Cummins made KKR the favourites.

In the end, an ill-timed no-ball, too many deliveries in the slot and an ever-improving batsman, Ravindra Jadeja, delivered the decisive hits on the game’s result and KKR’s chances with the bat. 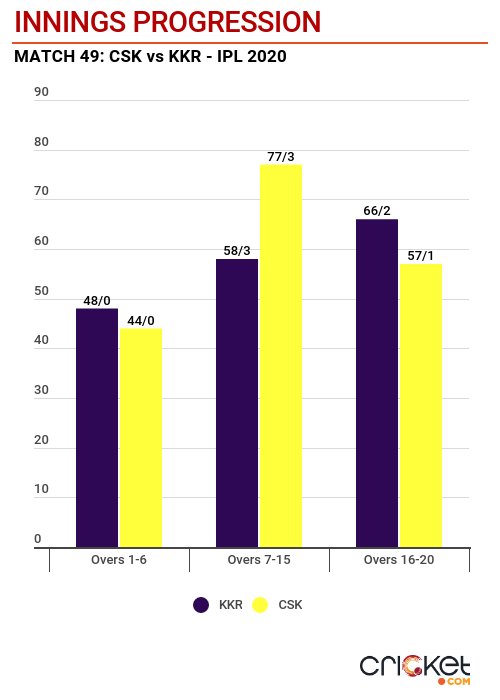 KKR failed to collect the much-needed two points. Mathematically, they are still alive if they go on to win their last game against RR. Practically, they need a lot of results to go in their favour owing to their abysmal Net Run-Rate.

KKR’s best Powerplay with the bat

In a must-win game, KKR openers stepped up with their best start in the season. After 12 games, the opening-pair for KKR survived the first six overs.

Just like every other day, there was swing in the air for Deepak Chahar. He started with an away going loosener which Shubman Gill dispatched through the offside. On another night, both Gill and his partner Rana could have perished as Chahar found their inside and outside edge respectively. As it turned out, the over cost CSK 13 runs.

Batting with purpose, Gill played his first dot ball in the fifth over. The best shot of the phase came in the fourth over when Gill made room to hit through the gap on the offside against an otherwise miser Sam Curran.

Rana spent most of the Powerplay overs struggling to come to terms with the swinging ball. But, he obliged when Lungi Ngidi offered him a half-volley.

Facing Mitchell Santner in the last over of the restrictions, Rana got the ideal match-up to dominate. He swept him twice for two fours and slog-swept him for a six to end the Powerplay with the scoreboard reading 48 runs.

With the end of the Powerplay began a sorry story for KKR. They could score 58 runs in the nine overs to follow.

It was back to the old days when Dhoni looked comfortable behind the stumps with his spinners operating. Even more surprising was the fact that even with a plethora of left-handers, KKR could not dominate CSK's leg-spinners and left-arm orthodox spinners.

After tackling the pacers well early on, Gill was loose against Karn Sharma on his first ball against him. On an innocuous fuller length ball, Gill failed to react and move forward. The inaction proved fatal as the ball crashed into his leg stump, ending his promising innings.

Anticipating spinners to bowl for CSK in the middle-overs, KKR promoted Sunil Narine to bat at three. He dominated to start with, hitting Karn for a six over long-on in the same over.

However, Santner cut his stay short. To a ball delivered slower, Narine could not time a slog sweep to perfection and ended up hitting to the throat of deep mid-wicket.

It was four and out for Rinku Singh, who came out to bat number four in his first game this season. After driving Jadeja for a four, he top-edged a sweep to deep square.

Rana did hold one end up for KKR and hit four crisp boundaries in this phase. But, he too was sedate for a better part of his innings as he brought up the slowest half-century for KKR in this season.

Karthik back where he belongs

With the help of their more established batsmen, KKR overcame the slump of the middle-overs.  After his spinners had done well to curtail KKR after a brisk Powerplay, MS Dhoni gambled with Karn Sharma for the 16th over.

Set by now, Nitish Rana took a toll of the leg spinner, slamming him for three back-to-back sixes to start with, two on the leg side and the third straight. Rana hit two more fours off Deepak Chahar before skying a Lungi Ngidi off-cutter to long-on.

Batting in his favoured phase, he looked more free-flowing and assured. Attacking every two out of three balls, he scored 21* off 10 balls. Contrary to his scratchy top of the order knocks, tonight Karthik was carefree and unleashed his unorthodox laps from the onset. Eoin Morgan contributed too with 12-ball 15.

As a result of these efforts, KKR added 66 runs in the last five overs to propel their score to a healthy 172.

Dhoni started a debate with his comments on not finding a spark in the youngsters. During the post-match contribution tonight, he accepted that due to the time taken by Ruturaj Gaikwad from recovering from his coronavirus infection, they could not have a good look at him.

After he backed up his innings against RCB with another artistic knock, the whole world along with the CSK management have taken notice.

He started off batting with confidence and precision. Never once did he try to muscle the ball and relied on timing.

He was also good with findings the gaps as he demonstrated while hitting Pat Cummins for a four to the left of mid-off in the third over of the innings. He showcased his touch-play twice. First when he hit Lockie Ferguson over his head for a four. Then, on perhaps the shot of the match, he punched a shortish ball from Varun from the back-foot over long-off for a six in the last over of the Powerplay. 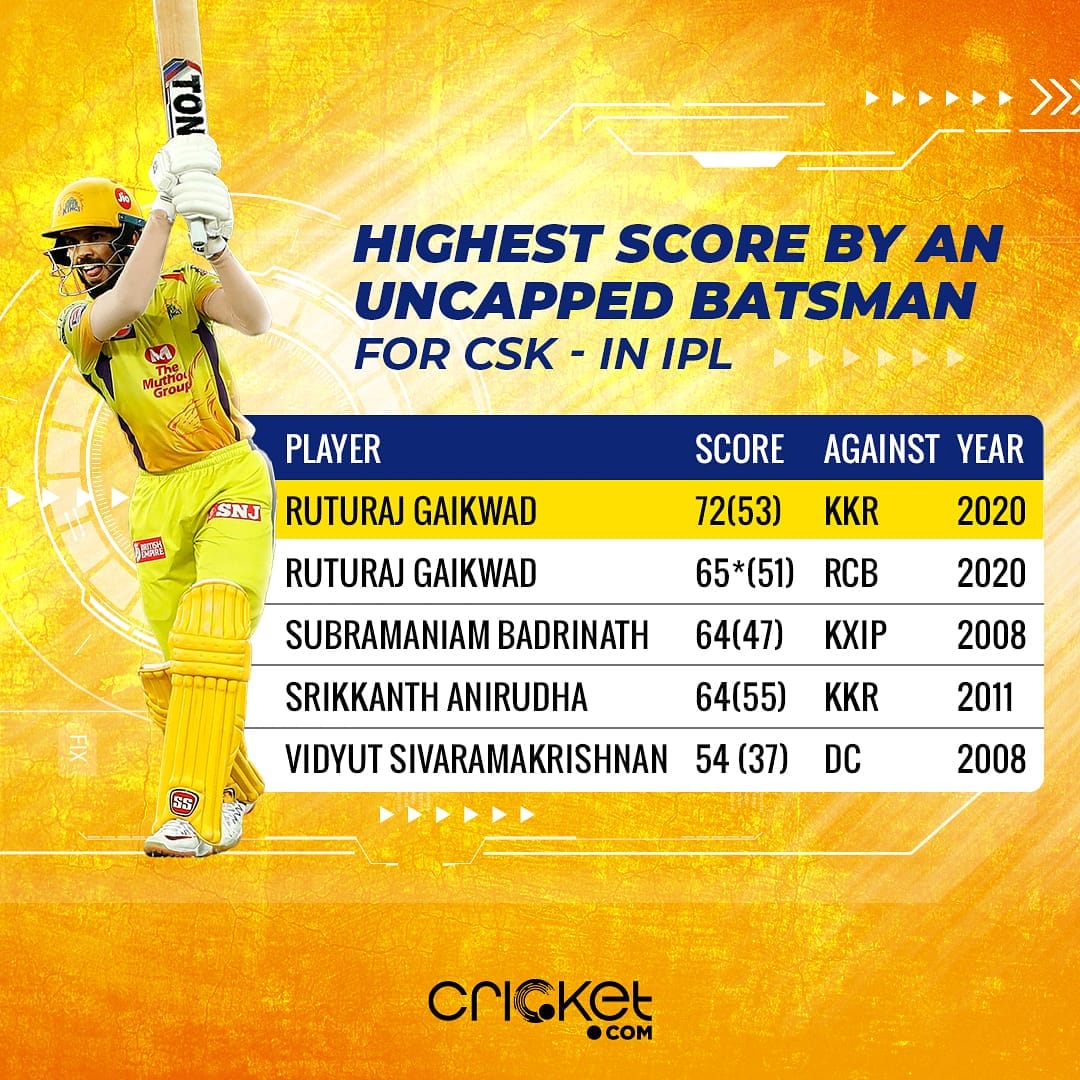 When Ferguson came back for his second over, the 11th of the innings, Gaikwad used the pace on the ball along with his touch play to guide the ball into the gaps or over the fence. In the end, an innings filled with delightful cricketing strokes ended in search of quick runs on an attempted ramp shot off Cummins in the 18th over.

After scoring 44 runs without a wicket in the Powerplay, CSK started the phase after the restriction with a lull. They added 21 runs in overs 6-9, losing Shane Watson to Varun.

In the 10th over of the CSK innings, KKR took a strange decision. Nitish Rana had bowled just one over in the IPL 2020 up until tonight. With two right-handers in the middle, KKR opted to try him out. Opening his shoulders, Ambati Rayudu tonked him for three consecutive boundaries.

Building the momentum with a 16-run over, CSK scored 46 in the next over from 11 to 14. Gaikwad dug into Ferguson while Rayudu thumped a short and wide delivery from Kamlesh Nagarkoti over the offside fence.

In an attempt to close the game soon, Rayudu attacked Cummins and hit back to back fours in the 14th over. But, getting carried away he hit the next ball to mid-off fielder a ball later.

Varun then brought KKR back into the game by doing a double on Dhoni this season. Failing to come forward on a fullish ball, Dhoni lost his leg stumps similar to Gill's dismissal in the first innings.

Enjoying one of his special seasons with the bat, Jadeja has now scored 232 runs in IPL 2020 at a strike-rate of 171.8. Tonight, his 11-ball 31* not only elated his side but established his credentials as a batsman growing in stature with time.

After being KKR's hero against SRH in the regular period as well as the Super Over, Ferguson had to take the bitter pill today. When he came out to bowl the 19th over, CSK needed 30 runs off the last two overs. After he was done, they needed 10 in the last one.

He had a decent start having given 7 runs in the first four balls. Then his fortune and those of KKR in IPL 2020 changed with a waist-high full toss. Off the free-hit delivered in the slot, Jadeja swung his bat for a characteristic hit to the cow corner to collect a six. Then an outside edge off the last ball reduced the target to 10.

Bowling the last over, young Nagarkoti started well too. Bowling wide off the stumps, he went for three runs on

the first four balls. Jadeja then dug into him as well, dishing out two sixes at his most preferred area to win the game for a jubilant CSK unit.

Before the Ferguson over, KKR had choked CSK with 22 runs in overs 16-18. This also included a precious 4-run over number 18th from Cummins that also resulted in the fall of Gaikwad.

After losing close games earlier in the tournament and also one against KKR, it turned out to be a memorable outing for CSK. They now have one less batting position to worry about for the time being.