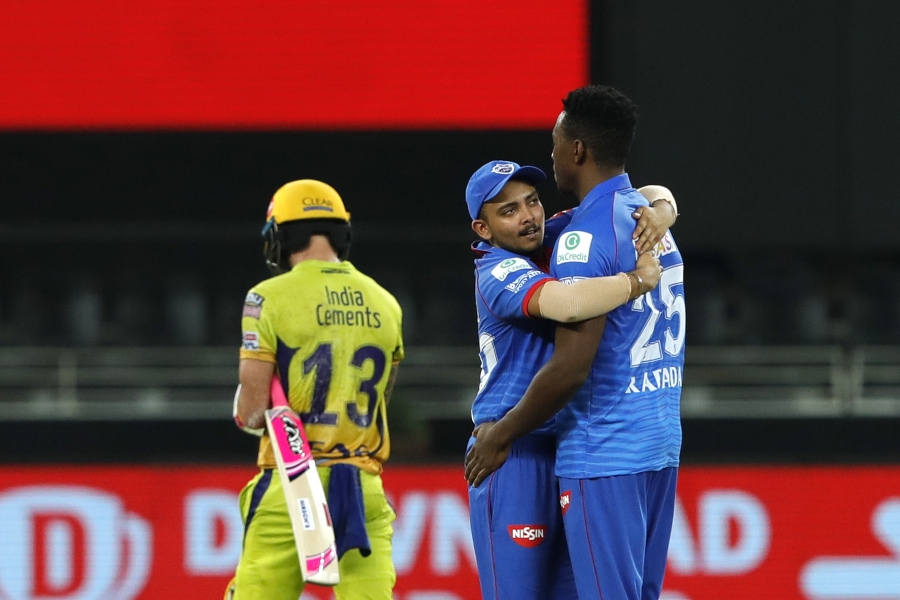 Start slow in a chase, preserve wickets upfront, be steady in the middle overs and unleash MS Dhoni in the death overs - Chennai Super Kings' template at the IPL is no secret. They have succeeded with this for years, but then one has to ask, how long can they live in this bubble of not being found out.

The model did not work for them against Rajasthan Royals in Sharjah and suffered an even miserable fate against Delhi Capitals on Friday (September 25) in Dubai. Having restricted Delhi to an average 175/6, the Chennai batsmen failed to gather any momentum in the chase as they went down by 44 runs in Match 7 of IPL 2020. This was Delhi's biggest margin of victory against Chennai in IPL.

MS Dhoni won the toss in Dubai and as has been the theme of the tournament elected to field first. Prithvi Shaw shone with a feisty 64 alongside Shikhar Dhawan as the duo stitched 94 runs for the opening stand, only the second time Delhi’s openers have posted a stand of 50 or more against CSK in all IPL. 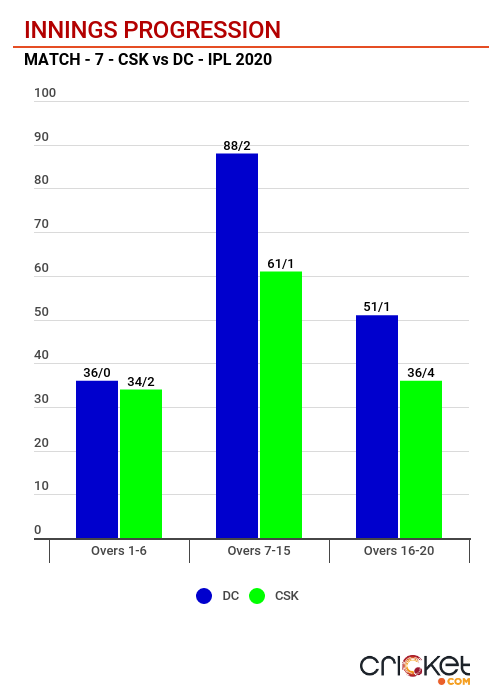 Deepak Chahar, who has had the wood over Shaw in the past, started off proceedings for Chennai, but the opener was up and running early as he cracked the pacer for two back-to-back fours through the covers. He had a slice of luck when off the second ball of the first over, an edge to 'keeper Dhoni went unnoticed.

It is no secret that Shaw struggles against genuine pace but against the likes of Chahar and Sam Curran, the 20-year-old was on the offence. He thumped Sam Curran for two more fours and showed good intent against Josh Hazlewood too. The same though couldn't be said about his partner Shikhar Dhawan for whom finding the gaps became a task in the first six overs. Underwhelming was very much an understatement as Delhi only managed 36 runs in the Power Play.

That narrative, however swiftly changed after the fielding restrictions were lifted. In the four overs after the Power Play, the Shaw-Dhawan combo smoked 52 runs with both openers going gung-ho. Shaw welcomed Chawla with two fours before Dhawan tonked Jadeja deep into the stands over square leg. While Jadeja’s first two overs went for 28 runs, Chawla’s first two were pummelled for 24.

Shaw soon brought up his fifth IPL half-century as well in the 10th over of the innings with Delhi getting their run rate up to the nine-run mark.

Chennai did make a comeback getting rid of both openers in quick succession. Chawla got his revenge of sorts as he first sent back Dhawan before getting rid of Shaw in successive overs. Dhawan was first to fall when needlessly going for a reverse sweep, he was caught right in front of the stumps for a 27-ball 35 while Shaw was stumped for a 43-ball 64.

With both set batsmen getting dismissed, Shreyas Iyer and Rishabh Pant took some time to get going. Chennai conceded only five fours in the last five overs and no sixes. Josh Hazlewood was the surprise package in the death. He bowled to his field, got the yorkers in place and was just unable to score off. The last over did have three fours in it, two off the bat and one of the pads as Delhi reached 175/3 after 20 overs.

Yes, Delhi did score 51 runs in the last five overs but surely with a plethora of big-hitters waiting in the wing, it could have been much more. 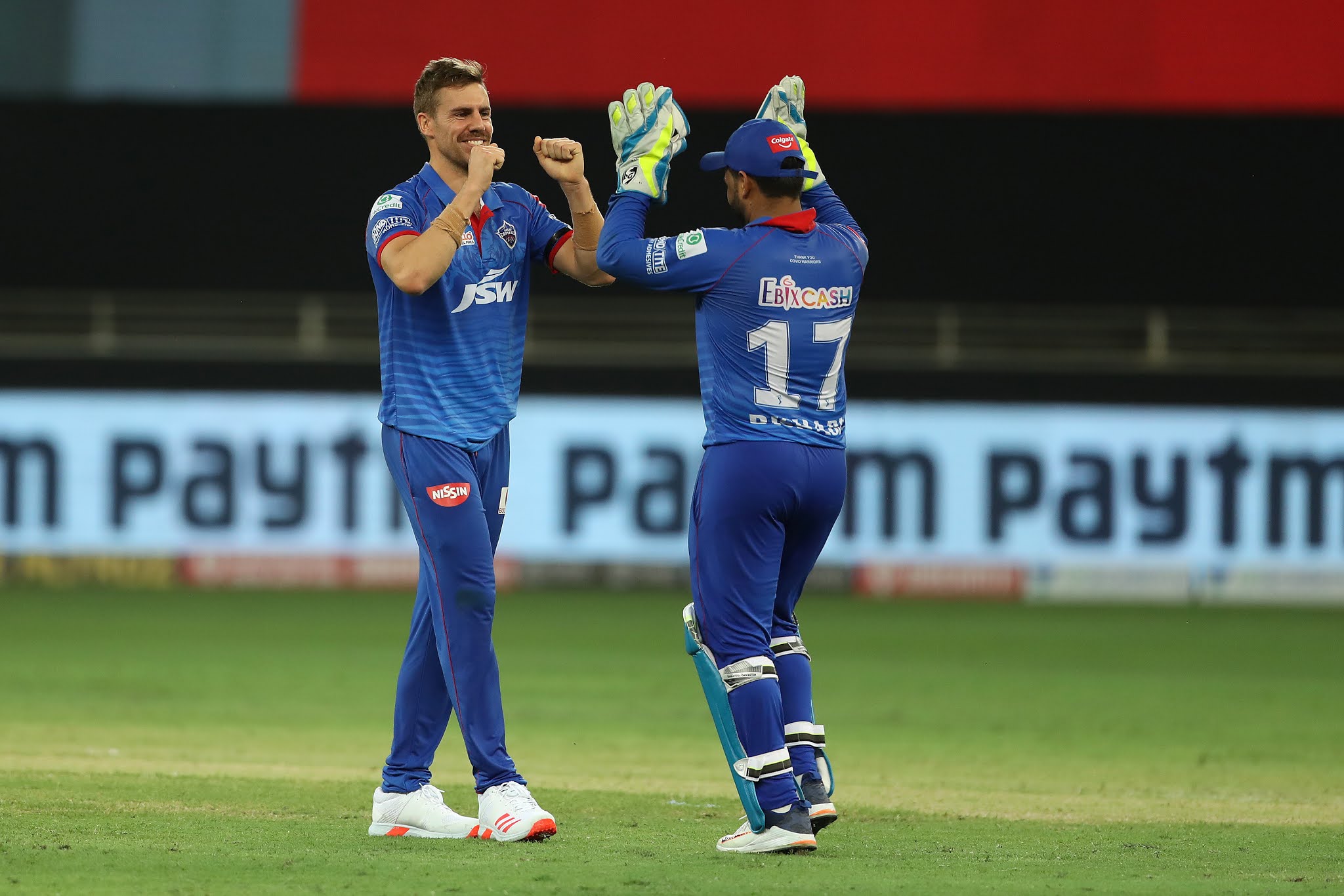 176 was certainly an achievable target but without Ambati Rayudu in the side, they desperately needed a strong start, something Chennai did not get. They were underwhelming, to say the least managing just 34 runs and losing the openers Shane Watson and M Vijay in the Power Play. Having said that the Delhi bowlers were on point from the word go.

Kagiso Rabada was in the mid-140s in his first over, so was Anrich Nortje. Avesh Khan was tonked for a six and a four by Watson as he reached 1000 runs in a CSK jersey but Axar Patel ended his happiness soon. A nonchalant short ball pulled straight into the hands of Shimron Hetmyer at deep midwicket saw Watson walk back for 14. Things went from bad to worse for CSK when Vijay fell off the final ball of the Power Play for 10 to Nortje.

While both Chennai and Delhi had a below par Power Play, the latter cashed on once spinners were introduced, which the Men in Yellow failed to. While CSK's spinners went for 77 runs in their 8 overs, the Delhi spin duo of Axar Patel and Amit Mishra went for only 41 runs off their 8 conceding only 2 fours.

CSK just shut shop in the middle overs having no intent whatsoever. Yes, the Delhi spinners were good, no questions about that. Axar bowled the stump to stump line and bowled at a pace that was tough to get under. Mishra, on the other hand, mixed his deliveries well, while bowling to his field. But not taking chances at all against the duo was something beyond understanding. Mishra and Patel conceding just two fours in their eight overs combined showed their skills but also Chennai's ineptitude.

Kedar Jadhav and Faf du Plessis did try and up the ante but it was a little too few too late. When MS Dhoni came into bat, Chennai needed 76 runs off 26 balls, a target too steep for even the greatest finisher the world has seen. Nortje and Rabada too were relentless. The former, in particular, bowled the tough overs - two in the Power Play, two in the death - and still went for only 21 runs picking 2 wickets. Rabada finished with 3/26 and is now the holder of the Purple Cap.

Twice in two successive games have Chennai failed to chase a target. Is it time for an overhaul in strategy?