MI march to their sixth final with a resounding win 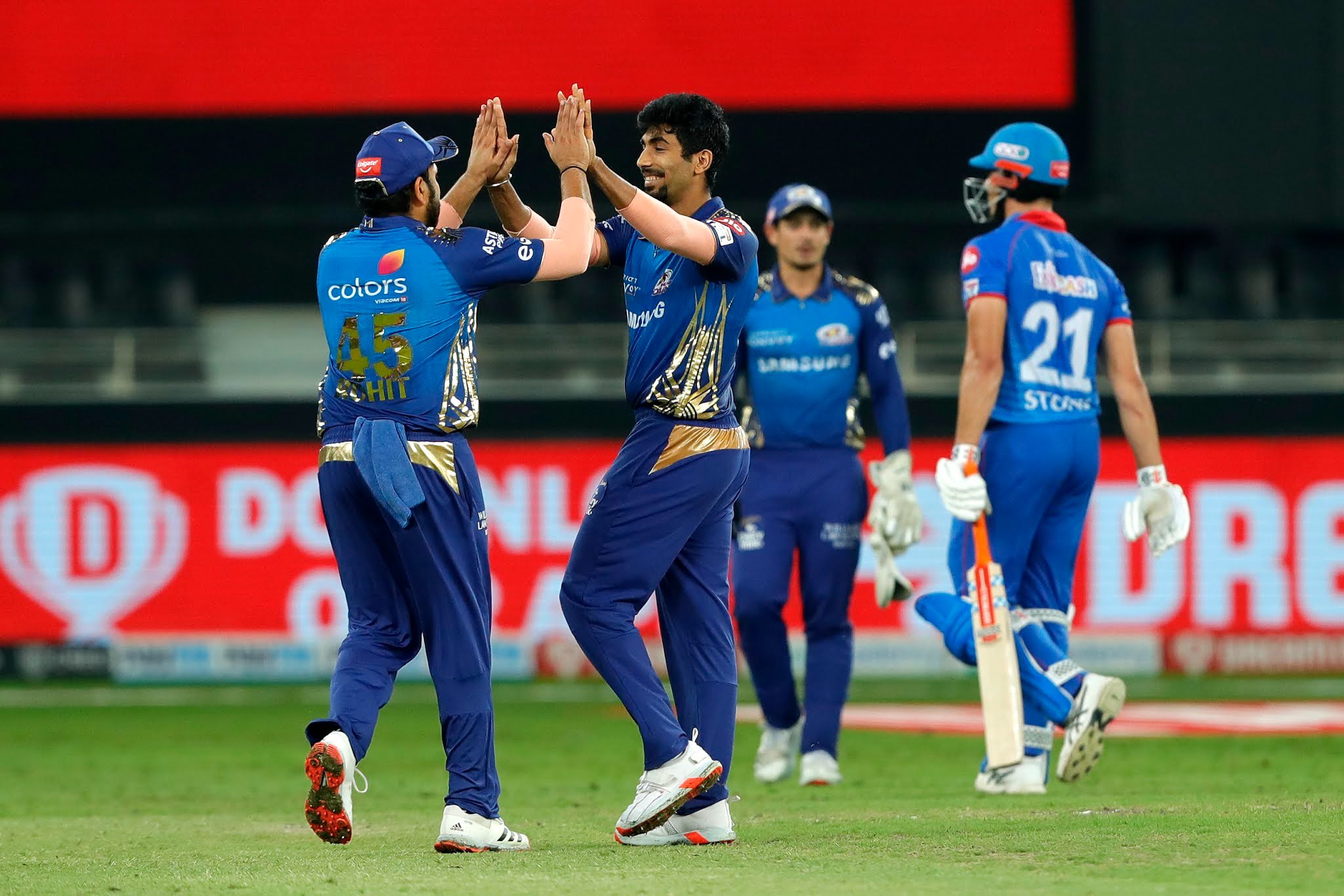 MI march to their sixth final with a resounding win

Delhi lost their top three batsmen for a duck each

In a perfect game for Mumbai Indians (read another perfect game), they demolished Delhi Capitals by 57 runs to storm into their sixth IPL final. They displayed every vigour in their squad that reigns them supreme over other sides - the best number three batsman in the competition, the depth in their batting and their new ball pair.

DC, on the other hand, will now fly to Abu Dhabi with the hope of utilizing their second chance to make it to their first final in the tournament’s history.

While DC exploited Rohit Sharma’s struggle against spin which saw Ravi Ashwin trapping him for a first ball duck in the second over of the game, Quinton de Kock and Suryakumar Yadav ensured they still keep the opposition under the pump. DC used five bowlers during the Powerplay but de Kock belted each one of them elevating MI to their highest Powerplay score this season - 63.

Alongside him, Surya displayed why he is the best number three batsman in this competition. He went past Virat Kohli in the list of the highest run-scorers at number three but the pace at which he went about his business was again the highlight of his innings. His 51 came at a strike-rate of 134.2 while he batted throughout what is considered to be the slowest phase in a T20 innings - overs 7 to 12. By the time he was out in the 12th over, MI had reached the 100-run mark looking comfortable for a big score.

Surya was ultimately dismissed on the back of some excellent captaincy by Shreyas Iyer. The DC skipper brought his prime pacers, Kagiso Rabada and Anrich Nortje, on right at the stoke of midway mark in MI’s innings. Nortje eventually got Surya to mistime a pull to Daniel Sams at long leg.

Next over, Iyer decided to bowl out Ashwin, against Kieron Pollard. The off-spinner has conceded runs against Pollard in the IPL history but has also got him out a few times. The punt worked perfectly as Pollard was holed out by the Rabada at long-on for a duck. This was the only phase when DC were in the game.

The death overs were the phase where DC lost the plot with the ball. They were carted for 78 runs as the depth in MI's batting line-up was underlined once again.

The first over of the death over phase was a sign of things to come with Ishan Kishan and Krunal Pandya belting Nortje for 18 runs. Krunal was removed by Marcus Stoinis in the next over but it was his brother, Hardik Pandya's turn to take over. Batting alongside Kishan, he added 60 runs from only 23 balls.

Pandya struck an unbeaten 37 from only 14 balls with five sixes. Kishan also continued hitting the ball all around the ground, finishing 55 not out from 30 balls. In the pre-match pitch report, Simon Doull called 185 a match-winning score. During MI's innings, their coach Mahela Jayawardene said they are looking for 170. But Kishan and Hardik ensured they score much more, ultimately pumping MI to 200. Consequently, each one of DC's prime pacers - Rabada, Nortje and Sams ended with an economy in excess of 10 runs per over. All of them missed their yorkers, often bowling full tosses which both Kishan and Hardik duly obliged.

DC have gone through a few poor starts but nothing can top losing your top three batsmen for a duck each. They were evidently 0 for three and had to rely on a wide in the second over of the innings to get off the mark.

Trent Boult, continued his brilliant first over form, dismissed both Prithvi Shaw and Ajinkya Rahane to set the ball rolling for MI. He got Shaw by nipping the ball away from the right-hander and then brought one back in towards Ajinkya Rahane displaying his skillset as a swing bowler.

Next over, Shikhar Dhawan got himself into a tangle against a peach of a yorker from Jasprit Bumrah. Iyer and Stoinis tried to weather the storm but a 20-run partnership was all they could manage. Trying to fetch a boundary, Iyer ended up handing the second wicket to Bumrah. Chasing 201, DC were 32 for four in the Powerplay. 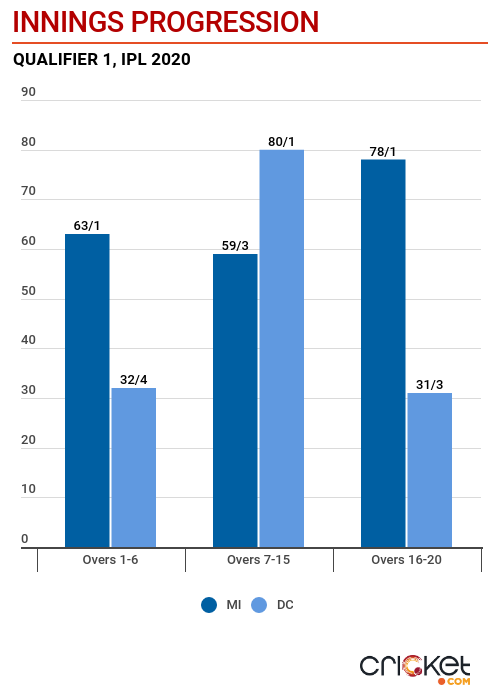 The only positive for DC from this game was Stoinis back to scoring runs again. In a brave effort, he struck 65 from 46 balls. He struck 3 sixes, two of which came in the ninth over against Rahul Chahar establishing the fact that there were no demons in the pitch. Axar Patel stuck in with him, striking Pollard for two maximums in the 15th over.

In a 71-run stand, the duo collected 37 runs in three overs between over number 13 to 15. With Boult out of the field due to a groin strain, Rohit went back to Bumrah in the 16th over and the fast bowler did not take long before shutting curtains on DC’s glimmer of hope.

He started with a peach that left Stoinis' stumps in a mess. Two balls later, Daniel Sams gloved a short ball to the wicket-keeper capitulating DC to seven wickets. It was a wicket maiden from Boult which derailed DC's chase early on and then a double-wicket maiden from Bumrah which shut the door on them. Bumrah ended with figures of four for 14 in four overs which won him the man-of-the-match award.