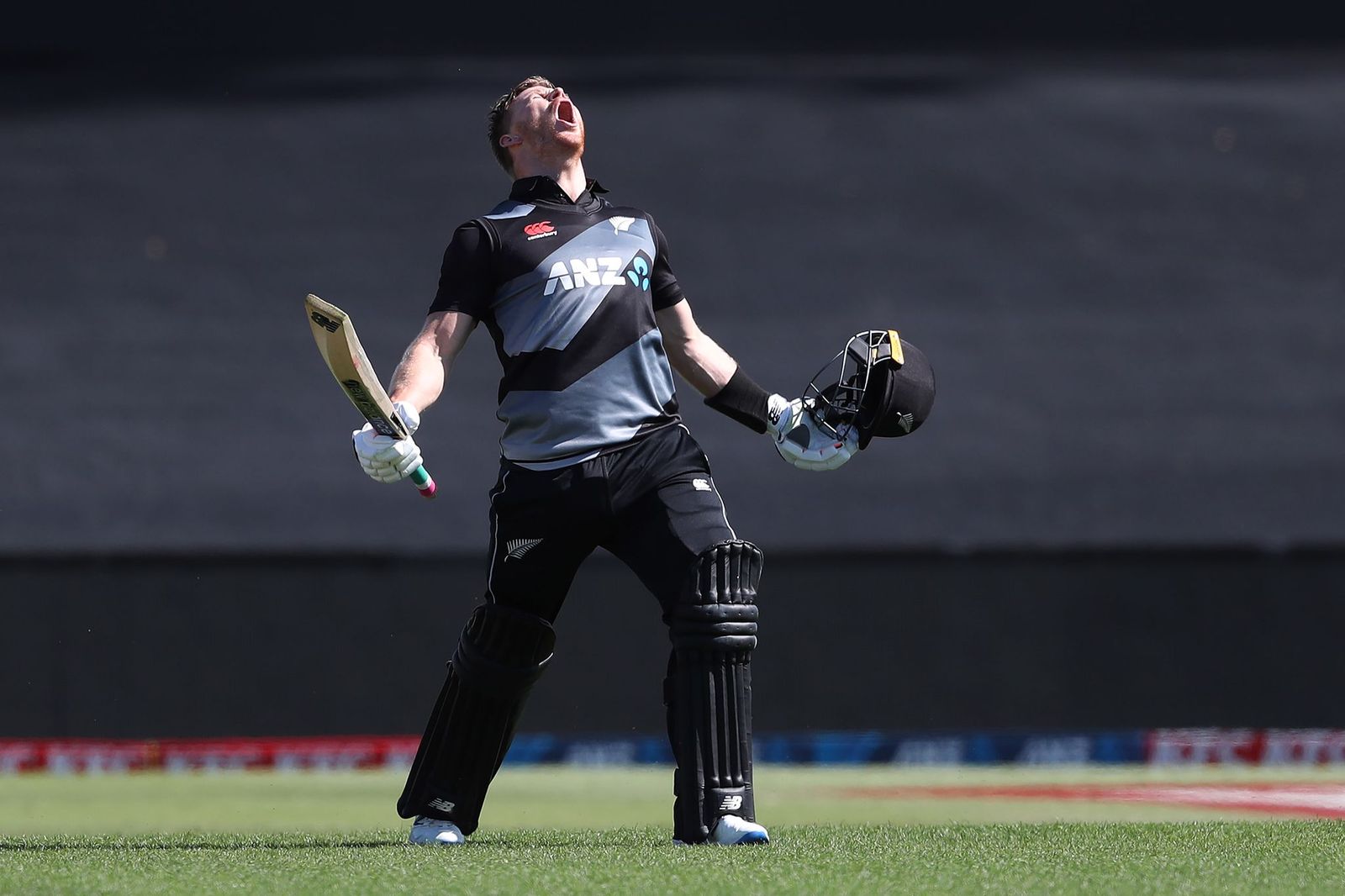 A blistering century from Glenn Phillips (108 off 51) and an unbeaten 64 off 36 from Devon Conway sees New Zealand register a comfortable 72-run victory after putting up a mammoth 238 for 3 from their 20 overs in the second T20 International (T20I) against West Indies at Bay Oval, Mount Maunganui. With this win, New Zealand have taken an unassailable 2-0 lead in the three-match series.

Phillips' ton was the fastest by a Kiwi batsman bringing it up off just 46 deliveries. Phillips and Conway put on 184, which is not just the the highest third-wicket stand in T20I cricket but also the highest for New Zealand.

Under overcast conditions, West Indies opted to field first, but New Zealand made them pay by batting out of their skin. The openers set up a decent platform after which their No. 3 and 4 did a fabulous job.

Phillips initially took about 10 deliveries to settle down and from there on, he started middling absolutely everything bringing up his fifty off just 22 bals. He was particularly severe hitting down the ground, scoring five out of his eight sixes in the arc between long-off and long-on. 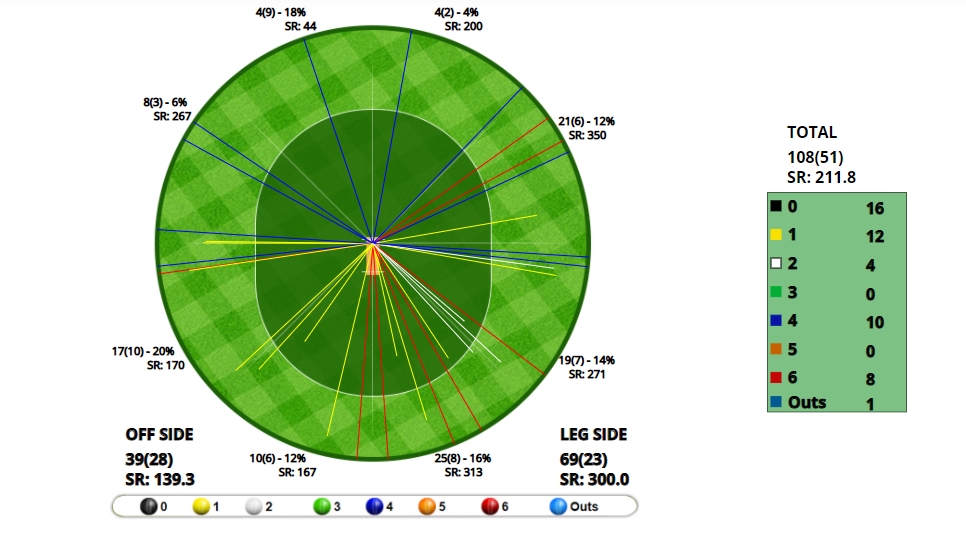 Conway, who was playing just his second T20I, played a huge role in ensuring Phillips played his natural game. He scored at just over run-a-ball for most part of the innings. From being 31 off 25, Conway raced to 53 off 32 in a matter of an over, showing that he can go big when the situation demands.

In a chase of 239, West Indies got off to the worst imaginable start as Brandon King was out first ball and then to make matters worst, Andre Fletcher was run-out for just 20 by Phillips. They managed to reach 44 without losing another wicket at the end of the powerplay, with a mountain still to climb. The pressure was on Shimron Hetmyer and debutant Kyle Mayers to ensure West Indies' victory.

Philips' day got even better as he took a stunning catch in the deep to get rid of Mayers for 20, leaving West Indies in a spot of bother. Nicholas Pooran's poor form for West Indies continued as he forced a top edge off Mitchell Santner, which he pouched safely in the end. However, skipper Kieron Pollard came in and whacked a couple of big ones with West Indies needing over 18 per over at the beginning of the 13th over. He hit one ball too many in the air and Santner had the last laugh as Pollard hit one straight down the throat of long-off for 25. From there, it seemed to be just a matter of time as Hetmyer too perished soon after that. The New Zealand bowlers and fielders put in a professional performance and at no point did they ever look like losing the grip on the game. 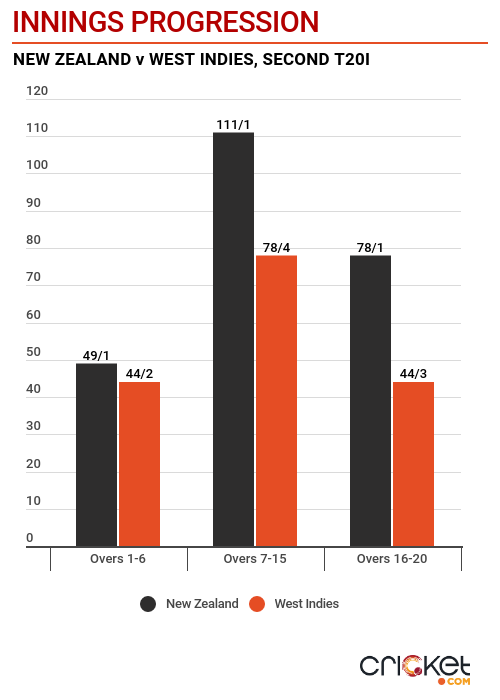 The New Zealand bowlers did a fine job with Santner and Kyle Jamieson finishing with two wickets apiece.

When things finally got underway after a rain interruption before toss, Martin Guptill had an early escape when he was dropped by Pollard at mid off. Mayers should have had his first wicket off the very first over, but that wasn't the case. While Sheldon Cottrell kept things tight from his end, runs were leaking from the other end, which eased the pressure on the New Zealand openers.

Guptill made a slow start but broke the shackles in the fifth over smashing Keemo Paul over the long-on fence and followed that up with a four off the final delivery of the over to get him going. Pollard rang in the changes quickly, introducing as many as four overs in the first six overs, but New Zealand were up to the task. However, Tim Seifert played one back on to his stumps in the sixth over to give Oshane Thomas and West Indies a much-needed wicket. In the end, New Zealand managed 49 runs for the loss of one wicket at the end of the powerplay.

Just when he was looking good, Guptill was caught beautifully down the leg side by Pooran off Fabian Allen for 34 off 23. In a matter of five deliveries, New Zealand had lost both their openers, which could have very well opened the floodgates. However, Phillips and Conway ensured that that it wasn't the case. Phillips especially took on all the bowlers, while Conway was happy to give him as much strike as possible.

The hosts brought up their hundred in the 11th over and were looking good to get to a score of close to 200. Phillips, who had taken 78 from 39 deliveries off Allen without ever being dismissed in T20s before this match further bettered that record by smacking him for 21 more runs in this innings in no time, which also included three sixes.

Rain came to West Indies' rescue with another 40 balls remaining in the innings, with New Zealand at 140 for 2, staring at at least 200 . Phillips continued from where he left off smacking the second ball after restart into the fence. Runs continued to flow off his bat even in next over as Phillips and Conway brought up their 100-run stand off just 49 deliveries.

Phillips was caught at long off in his 80s but the ball from Cottrell was above his waist and the New Zealand batsman survived. After quietly watching Phillips go berserk at the other end, Conway joined the party, launching into Paul in the 18th over, hitting him for a six and a four off the first two deliveries. to bring up 200 for New Zealand.

A slash over backward point brought up Conway's maiden international fifty off just 32 deliveries. Phillips was not to be denied as he brought up his century in the penultimate over off just 46 deliveries - the fourth from his country to achieve this feat in T20Is. He was finally dismissed for a 51-ball 108 off the penultimate ball of the innings, brining curtains to a magnificent partnership of 184. 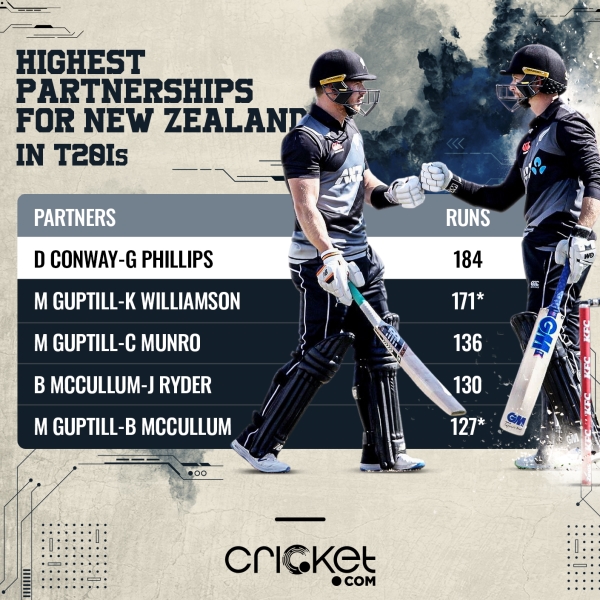 Both teams rang in a change to their XI. While West Indies got in Mayers for Kesrick Williams, New Zealand roped in Ish Sodhi in place of Hamish Bennett.

Player of the match: Glenn Phillips 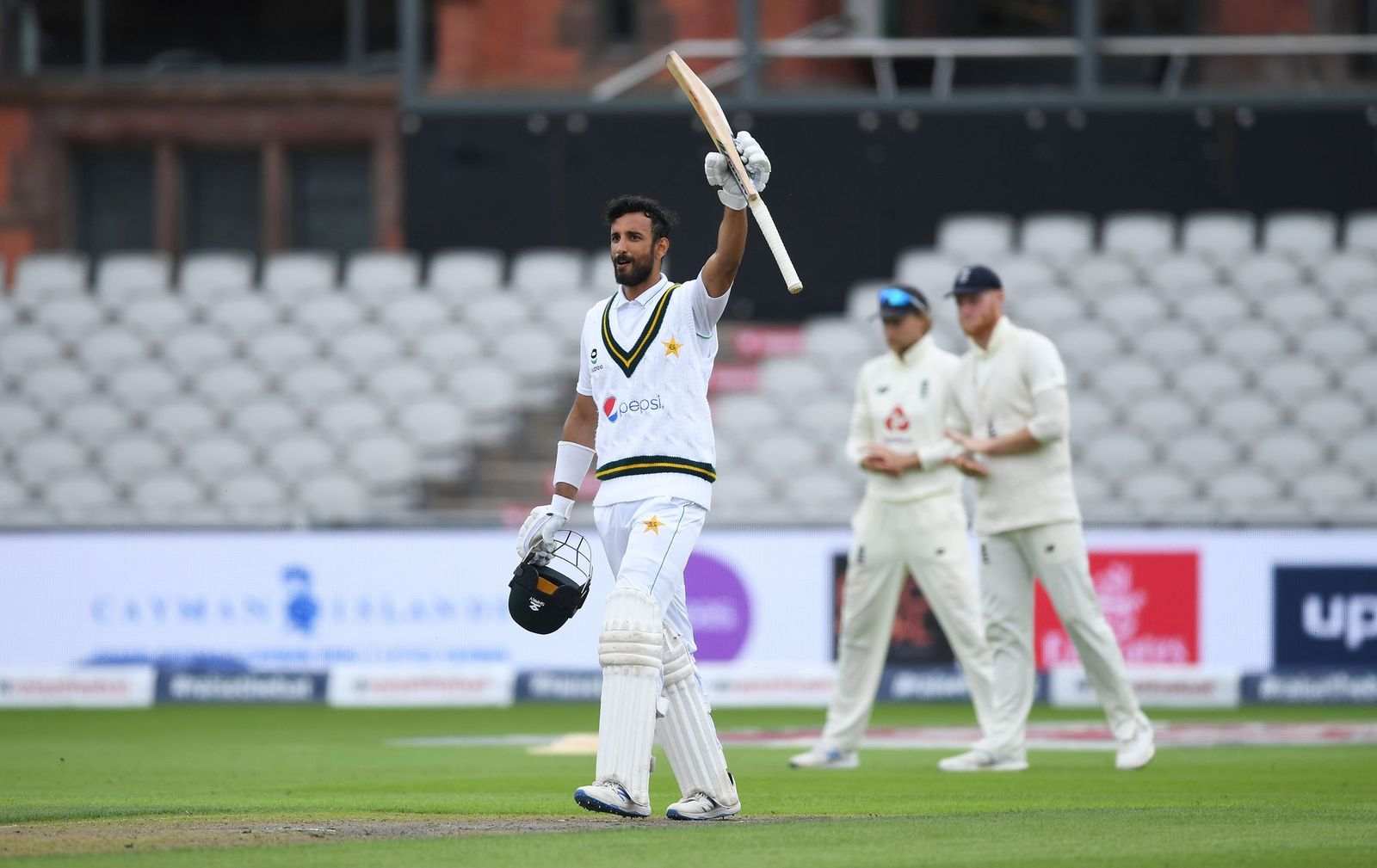