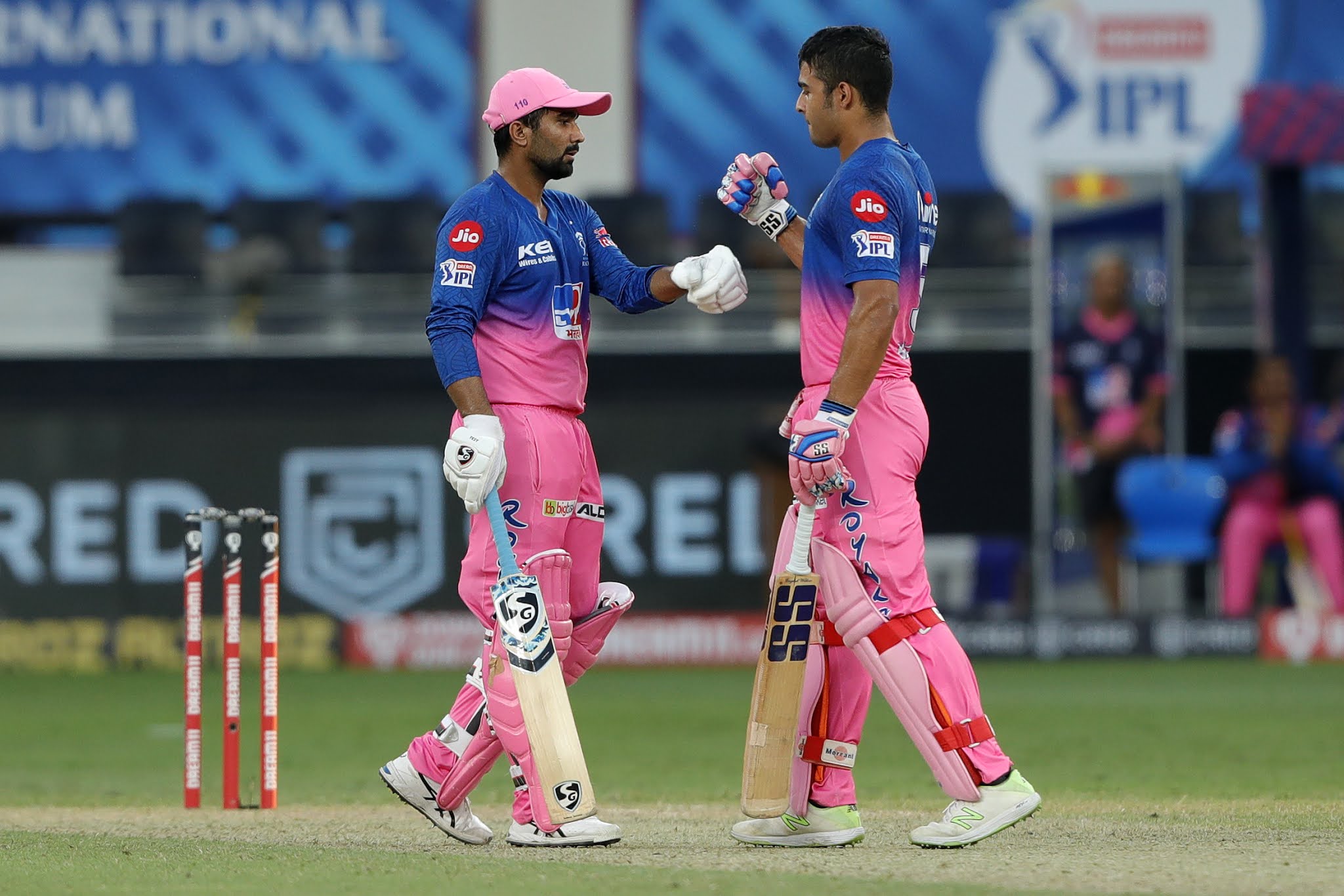 On the back of an excellent partnership between Tewatia and Parag, Royals defeat Sunrisers by five wickets

Two weeks ago, Rahul Tewatia pulled off a miraculous victory for Rajasthan Royals with the bat against Kings XI Punjab at the Sharjah Cricket Stadium. And he was at it once again on Sunday (October 11), this time in Dubai, as his unbeaten 45 and Riyan Parag's 42* led Rajasthan to a remarkable victory against Sunrisers Hyderabad.

Having been on the wrong end of four back-to-back defeats, it was no surprise to see Rajasthan make a host of changes – as many as four here – and one of them ended up being incredibly crucial. Parag, who was left out of the team that faced Mumbai Indians and Delhi Capitals, showed why he’s considered as one of the best young talents in Indian talent with a superb knock under pressure.

When the duo of Tewatia and Parag came out to bat, the Royals were struggling at 78/5 and seemed to be heading towards their fifth consecutive loss. Both took time to get set, before unleashing the big hits during the final stretch. The unbeaten 85-run partnership between Tewatia and Parag is Rajasthan’s joint-best sixth-wicket stand in the IPL.

Earlier in the day, Sunrisers Hyderabad won the toss and, unsurprisingly, opted to bat first. In Dubai, prior to this match, teams batting first had won 10 out of 11 matches this season.

SRH made a conservative start to their innings, with their opening pair of David Warner and Jonny Bairstow unable to get the big shots away. Jofra Archer, especially, bowled a superb opening spell and was unfortunate to have missed out on a maiden over due to a misfield early on.

With Kartik Tyagi coming into bowl in the fifth over and the score reading just 13/0, Bairstow decided that it was time to step up the scoring rate and he signalled his intentions with a huge six off the third delivery of the over. Off the next ball, the Sunrisers wicketkeeper-batsman went for a big shot once again but did not get the distance that he wanted. It still required a brilliant effort from Sanju Samson in the outfield to send Bairstow back to the pavillion.

After that slow start, Warner and Pandey put together a fine 73-run partnership for the second wicket. As soon as the fielding restrictions were removed, Pandey took the attack to Tewatia with a brilliant six down the ground. After that, Warner took over but just as he neared his fifty, he was bowled by Archer who was brought back into the attack to do exactly that. In international cricket, Archer has got the better of Warner over the last year or so and it was the case once again here.

Pandey, just like the SRH openers before him, began cautiously and was scoring at around a run-a-ball for most of the innings. He accelerated well later on but seemed to be tiring before being dismissed for 54.

Since IPL 2018, this was Warner and Pandey's sixth 50+ partnership from eight innings.

A strong end to the SRH innings saw Warner's side set RR a target of 159, with the duo of Kane Williamson and Priyam Garg adding 36 runs from the final 14 deliveries of the innings.

Archer had conceded just six runs and taken one wicket from his first three overs, but in his final over, which was the penultimate one of the innings, he went for 19 runs as Williamson hit him for a couple of sixes. Then, Garg scored a couple of boundaries against Jaydev Unadkat as 35 runs were added in the final two overs.

Ben Stokes' availability for this game would have come as a huge boost for the Royals, who were desperate for a win. But the England allrounder couldn't make a telling impact on this occasion as he was bowled for just five by Khaleel Ahmed – this, after Stokes and Jos Buttler became the fourth different opening pair for RR this season, the most used by any team so far.

A moment of hesitation while running between the wickets then proved to be costly for RR as Steven Smith was found short of the crease while attempting a second run. Buttler didn't last long either as Khaleel dismissed him soon after.

After the first three wickets fell for just 26, Samson and Uthappa had put on a 37-run partnership for the fourth wicket. But just as the duo looked to be doing a decent job of rebuilding the Royals innings, Rashid Khan sent both batsmen back to pavillion.

At the time, it looked like SRH would cruise to victory. Tewatia and Parag, though, had other ideas.