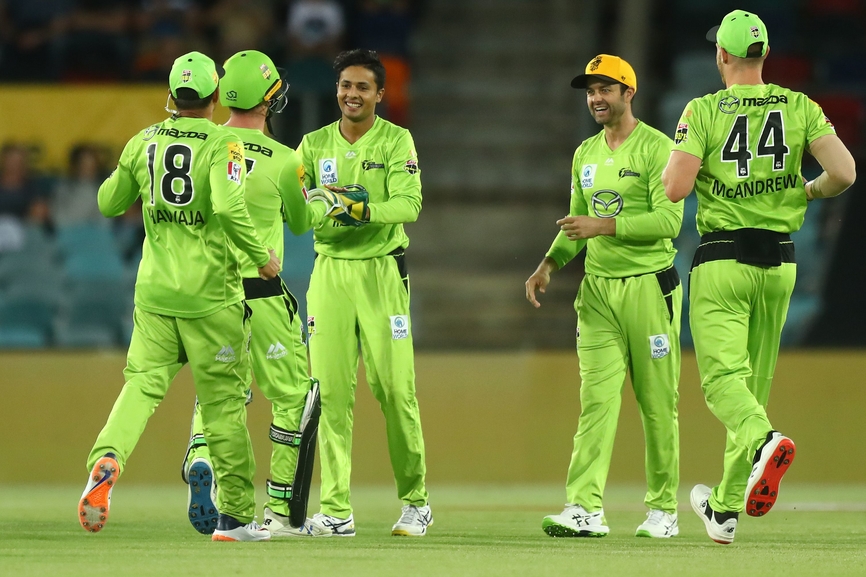 Other than the fact that the Renegades have been beaten by both Sydney teams comprehensively this season, today’s loss was the second biggest margin of defeat in terms of runs in BBL history. The 80 all-out was also their third lowest total in the BBL.

With this win, Thunder go top of the BBL 10 table with 11 points, just ahead of Hobart Hurricanes on net run-rate, while Renegades are in sixth place on four points, having won just one out of their four matches so far.

The Renegades never looked to be in the game at any point right from the start when Thunder openers Usman Khawaja (34) and Alex Hales (35) put on 50 in the powerplay itself. From there on it was just a question of building on the platform, which the rest of the Thunder batsmen did quite well.

However, Renegades pulled things back in the end when they reduced Thunder from 172 for 3 to 186 for 8 in a span of 16 deliveries. Nathan McAndrew smashed 22 off the final over to take Thunder past the 200-run mark, which they looked set to get right from the outset. 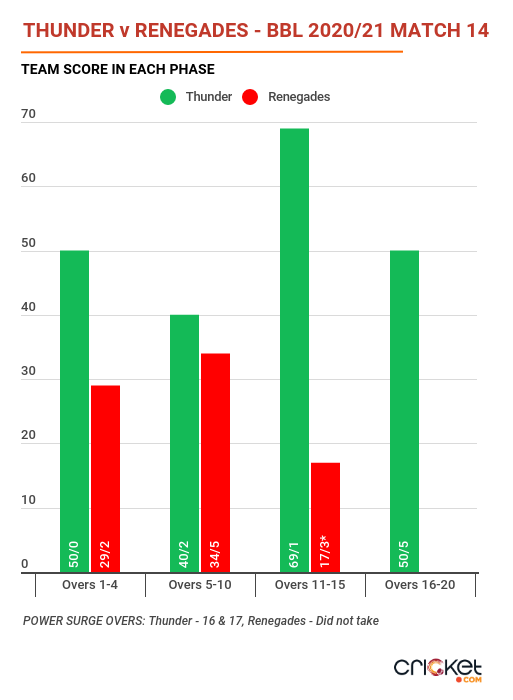 * Renegades were bowled out in 12.2 overs

Tanveer Sangha has impressed everyone with his leg-spin this season, but today, he proved too hot to handle for the Renegades batsmen. He started off with the wicket of Aaron Finch right after the powerplay and then added three more to his kitty to finish with figures of 4 for 14. He did not single full delivery, but instead held his length a bit back, which paid rich dividends.

Before Sangha’s heroics, it was 20-year-old Oliver Davies, who smashed a 23-ball 48 to set the match up for his team. His fearless brand of cricket fetched him five big sixes and a four, but more importantly, he put on 58 off 37 with Callum Ferguson (31) for the third wicket, which was crucial as Thunder had lost their openers in quick succession. Davies took a special liking towards Afghanistan off-spinner Mohammad Nabi, who he smashed for four sixes in a row to keep the momentum going. Credit has to be given to Ferguson, who played second-fiddle for the youngster and then during Daniel Sams’ (22) brief cameo.

The Renegades never got things going right from the beginning. It did not seem like they had a plan or strategy to chase the target down. Instead, they went for reckless shots one after the other and in the end, the mountain became too steep to climb.

Renegades captain Finch returned to the XI after missing the previous game to spend time with his family, but he was only one of the two players to get into double figures. The entire Renegades team scored 10 runs lesser than 90, which is what Thunder had scored in the first 10 overs of their innings.

This is certainly not how Finch would have wanted to mark his return, but if he and the team management need to sort things out at the earliest to avoid such embarrassing defeats in the future. Time has perhaps come to make some harsh calls and dig into the bench.

Renegades finished rock bottom last season and at this rate, they could be heading in the same direction once again. They have a couple of days to turn things around as they take on Sydney Sixers in their next match on December 29 at the Carrara Oval.

Thunder too are in action on the same day against Melbourne Stars at the Manuka Oval, Canberra.

Player of the match: Oliver Davies