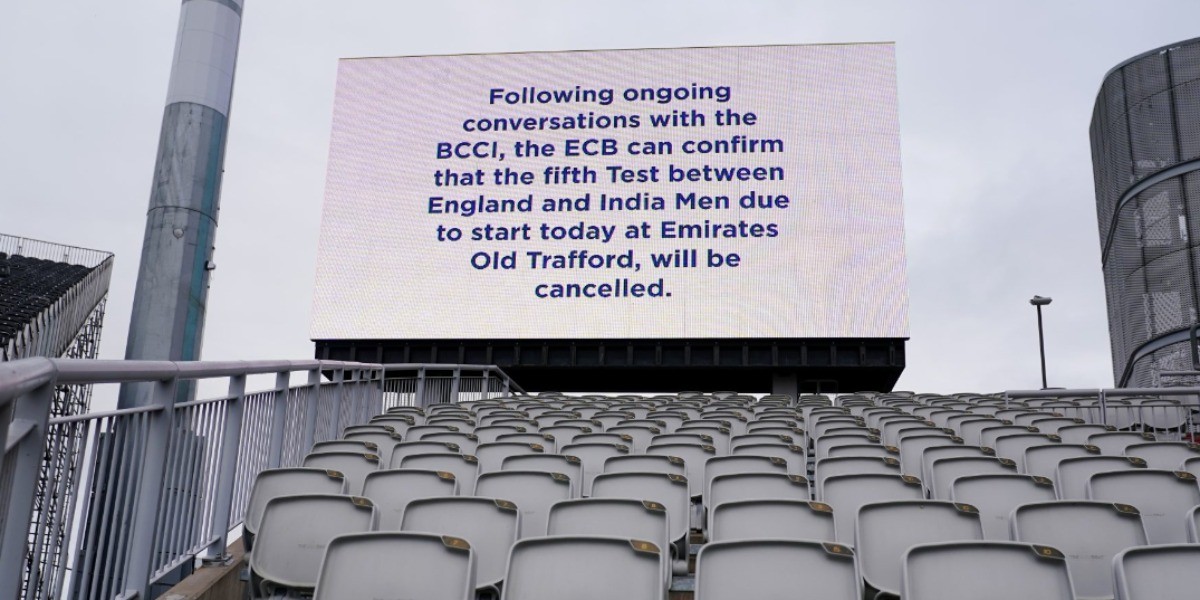 The fifth Test between England and India is cancelled. Follow the developments from Manchester here

September 10 – Kohli, Shastri did not consult BCCI before going to the book launch

With the entire team at Ravi Shastri's book launch, neither did he nor skipper Virat Kohli seek BCCI's permission before going to the event. Four members of India's backroom staff including Shastri tested positive for Covid-19 after that.

September 10 – Will it be James Anderson's last Test at Old Trafford?

Tom Harrison, ECB's CEO expresses that the Indian team had to give up on the Test as a case for mental fatigue rather than it solely being on the basis of COVID-19 issues.

"It's been a long night. It's just really sad. You can't be flippant about issues of mental health, and this is what this is about. India have been wonderful tourists, but they have been here for a long time," Harrison told Sky.

"Playing at this level, week after week, is difficult. Even if we feel we are emerging from the pandemic, life is different for the players. When Covid creeps into an environment, it can accelerate very quickly Hopefully we can get this Test on some other time, but it won't be the same as it having the conclusion after four brilliant matches."

"The BCCI, this India team and their captain want to make their mark in Test cricket. I don't think the IPL should worry people who feel there is an agenda is at place here. I was on the phone all night. Once those fears creep in they can be very hard to shift. There are no winners in this one."

"100% the BCCI wanted to get this game on. There is a strong relationship between the ECB and BCCI. We will definitely come through this, probably even stronger than we went in."

Also Harrison claimed that the rescheduled Test would a one-off event, which is what makes it skeptical, given how all Test series in the World Test Championship cycle must be at least two Tests.

"I think [it's] a standalone situation. We've also been offered other options. Being a few hours into this, we probably need to take a look."

September 10 – Dinesh Karthik talks about being in a bio-bubble

Dinesh Karthik, who was part of this tour as a commentator has now offered his opinion on the decision taken by the two boards.

Following ECB’s statement, the Board of Control for Cricket in India (BCCI) insisted that they are offering the ECB with a chance to reschedule the final Test later. However, the BCCI stated that both the boards would work amicably to find a window to reschedule the Test match.

"In lieu of the strong relationship between BCCI and ECB, the BCCI has offered to ECB a rescheduling of the cancelled Test match. Both the Boards will work towards finding a window to reschedule this Test match,” BCCI stated.

"The BCCI has always maintained that the safety and well-being of the players is of paramount importance and there will be no comprise on that aspect.”

"The BCCI would like to thank the ECB for their co-operation and understanding in these trying times. We would like to apologise to the fans for not being able to complete an enthralling series."

In the aftermath of ECB's statement, Lancashire Cricket offered its' fans and ticket holders an update on the fifth Test.

“As a Club, we are absolutely devastated about the late cancellation of the Test at Emirates Old Trafford."

“We’d like to unreservedly apologise to ticket holders and all those that have or are due to travel to Emirates Old Trafford. A full refund will be issued, but we appreciate for many supporters, attending this Test match is more than just the monetary worth. After the last 18 months we’ve all experienced through the pandemic, it’s a fixture cricket fans in the North West have looked forward to for the best part of 18 months.

“You can’t overestimate the work that goes into preparing for a five-day Test Match and I’d like to thank all our supporters, guests, suppliers, partners and all those involved for their continued support. I’d also like to thank all of the amazing staff who work at Emirates Old Trafford who have worked tirelessly to prepare the ground for the Test. We have an incredibly loyal and talented group of people who have worked very long hours in the run up to this game.

“We are working closely with the England and Wales Cricket Board on next steps and the finer detail that will follow as a consequence of this cancellation. In due course, the Club will contact ticket and hospitality holders.

“The Club would like to once again express it’s sincere apologies for all inconvenience and disruption caused to all involved.”

After several deliberations and meetings, the England and Wales Cricket Board (ECB) confirmed that the fifth Test between India and England stand cancelled. However, there was still not an update on what was the final score line of the series or how the cancelled Test would affect the World Test Championship (WTC) points system. In its first update, the ECB stated that the Indian team has forfeited the Test but later changed their stance. 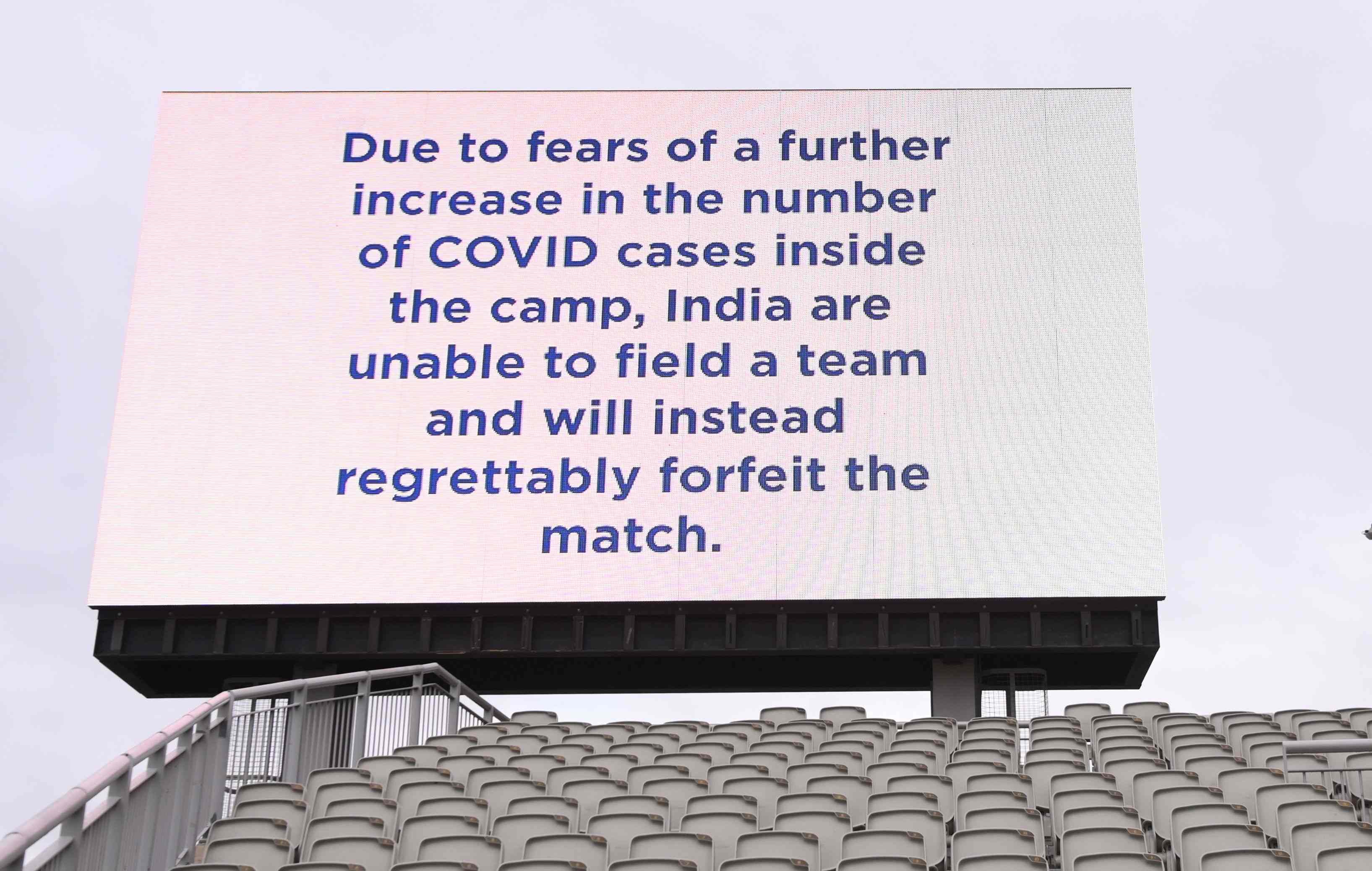 "Due to fears of a further increase in the number of COVID cases inside the camp, India are regrettably unable to field a team. We send our sincere apologies to fans and partners for this news, which we know will cause immense disappointment and inconvenience to many."

September 10 – The day of the Test

Reports in the early half on Friday suggested that the first day of play of the fifth Test in Manchester between India and England could be postponed. However, there was no real clarity when it would be postponed or whether it was just restricted to first day’s play.

September 9 – Indian players tests negative for the virus, game set to go ahead

In what was a big litmus Test for the fifth encounter, the Indian players came out negative in their COVID-19 tests, which assured that the possibility of the Manchester Test was high. However, everything still was on reports basis, given that there was no real clarity over the situation from either ends.

"All the players have returned with negative test," a senior BCCI source told PTI on Thursday (September 9).

Amidst the news of the match being postponed, England’s vice-captain Jos Buttler came out stating that he expects the fifth Test in Manchester to go ahead as per schedule.

On the eve of the fifth Test, BCCI’s president Sourav Ganguly at a book launch was quoted as being unsure whether the Manchester Test would be played as scheduled.

"We don't know if the match will happen at the moment. Hopefully, we can get some game," said Ganguly at the book launch of 'Mission Domination' in Kolkata.

While Yogesh Parmar did take the field in the fourth Test, in the build-up to the fifth Test, the physio was tested COVID-19 positive, which came as an alarming news. India’s practice session, on the eve of the Manchester Test was cancelled, with a question over the status of the players’ safety.

The Indian team, had to undergo the COVID-19 tests, on Thursday before the scheduled first day’s play on Friday in Manchester.

A day after Ravi Shastri tested positive, on Monday, the reports confirmed the fear that the duo of Bharat Arun and R Sridhar also tested positive for COVID-19, which then subsequently ruled them out of travelling to Manchester.

Yogesh Parmar took over temporarily as the head Physiotherapist, with the batting coach Vikram Rathour acting as the head coach of the side.

On September 5 (Sunday), ahead of the play on day four of The Oval Test, Board of Control for Cricket in India (BCCI) confirmed that head-coach Ravi Shastri was tested positive for COVID-19 during the flow Tests. The board also stated that the bowling coach Bharat Arun, fielding coach R Sridhar and Physiotherapist Nitin Patel have all been isolated in the wake of the events.

The players, however, tested negative as they took field on the fourth day of the fourth Test.