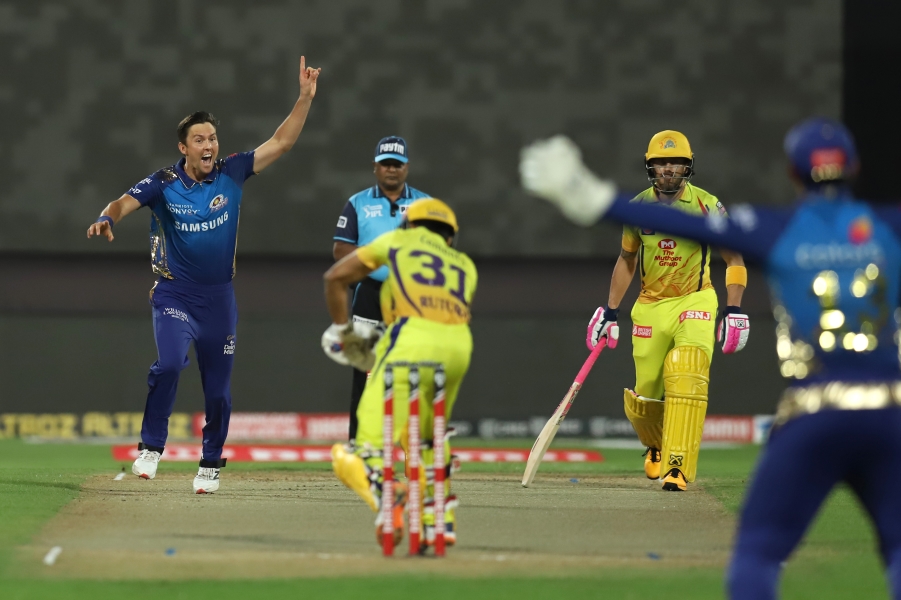 Mumbai demolished Chennai as records fell like nine pins. Here are the significant statistical milestones from the game.

The third-worst Powerplay score of all time

Heading into Match 41, there still was a glimmer of hope for Chennai Super Kings to make it to the playoffs, but after a dismal performance today, the probability sank like a ship. Against one of their biggest nemesis, CSK got off to the worst possible start. Trent Boult and Jasprit Bumrah, destroyed the top order of CSK. Without Shane Watson in the playing XI, Ruturaj Gaikwad in the first over, fell prey to a perfect setup by Boult. In the next over, Bumrah over Rayudu and N Jagadeesan in back-to-back deliveries. Boult in his second over accounted for Faf du Plessis that dented CSK more. In the final over of the Powerplay, Boult once again provided a breakthrough via Ravindra Jadeja. CSK ended the Powerplay at 24/5, which is the third-worst score in this phase in the whole of IPL. This was also CSK’s worst Powerplay score, they had never lost five wickets in this phase in IPL. 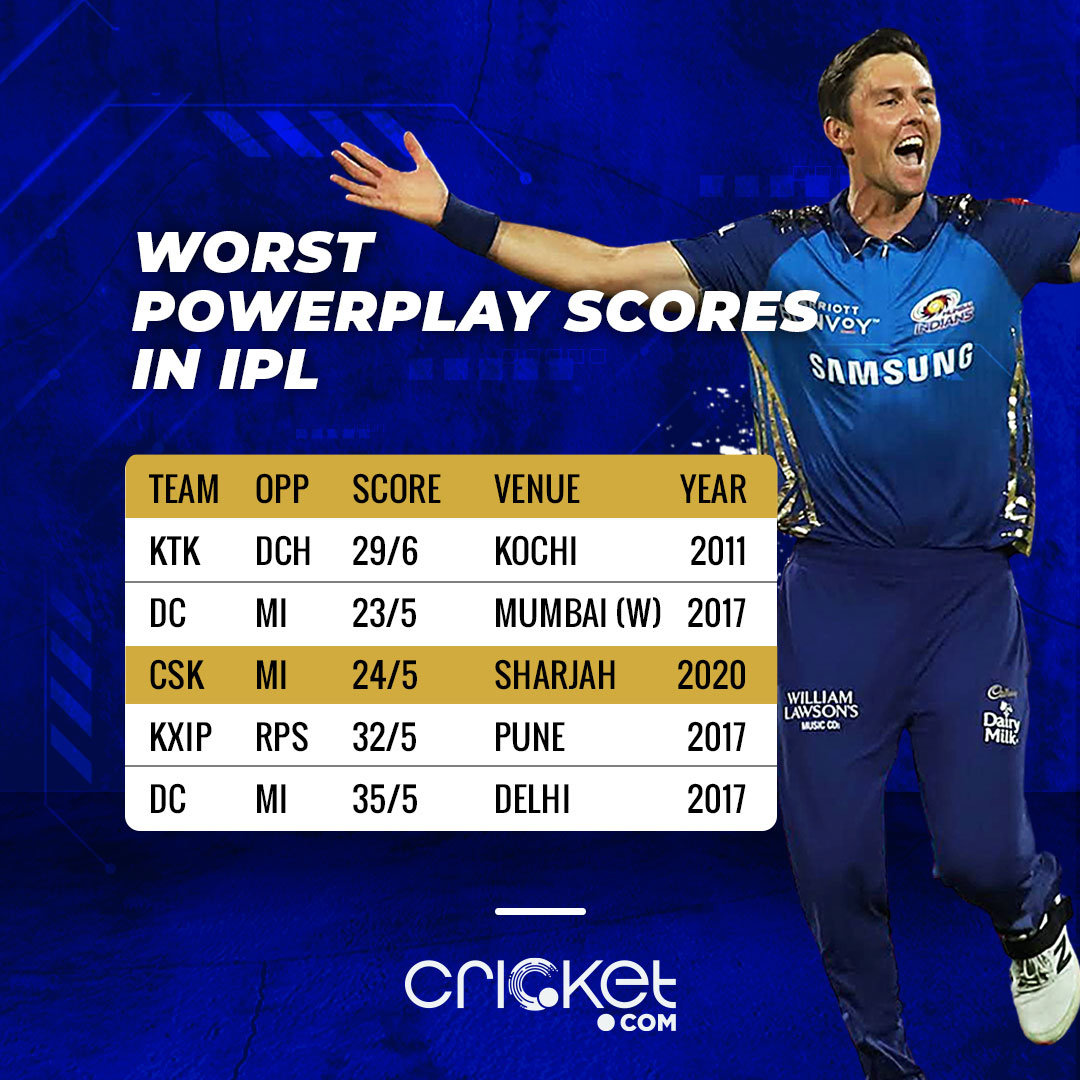 Most sixes as a captain in IPL

Coming in to bat early, MS Dhoni had all the time to settle in for a big score today. However, the CSK skipper couldn’t utilize it as he scored only 16 runs. His 16-run innings consisted of one six, which was his 200th as a captain and two fours. With his six, Dhoni became the first captain in IPL to hit 200 sixes. 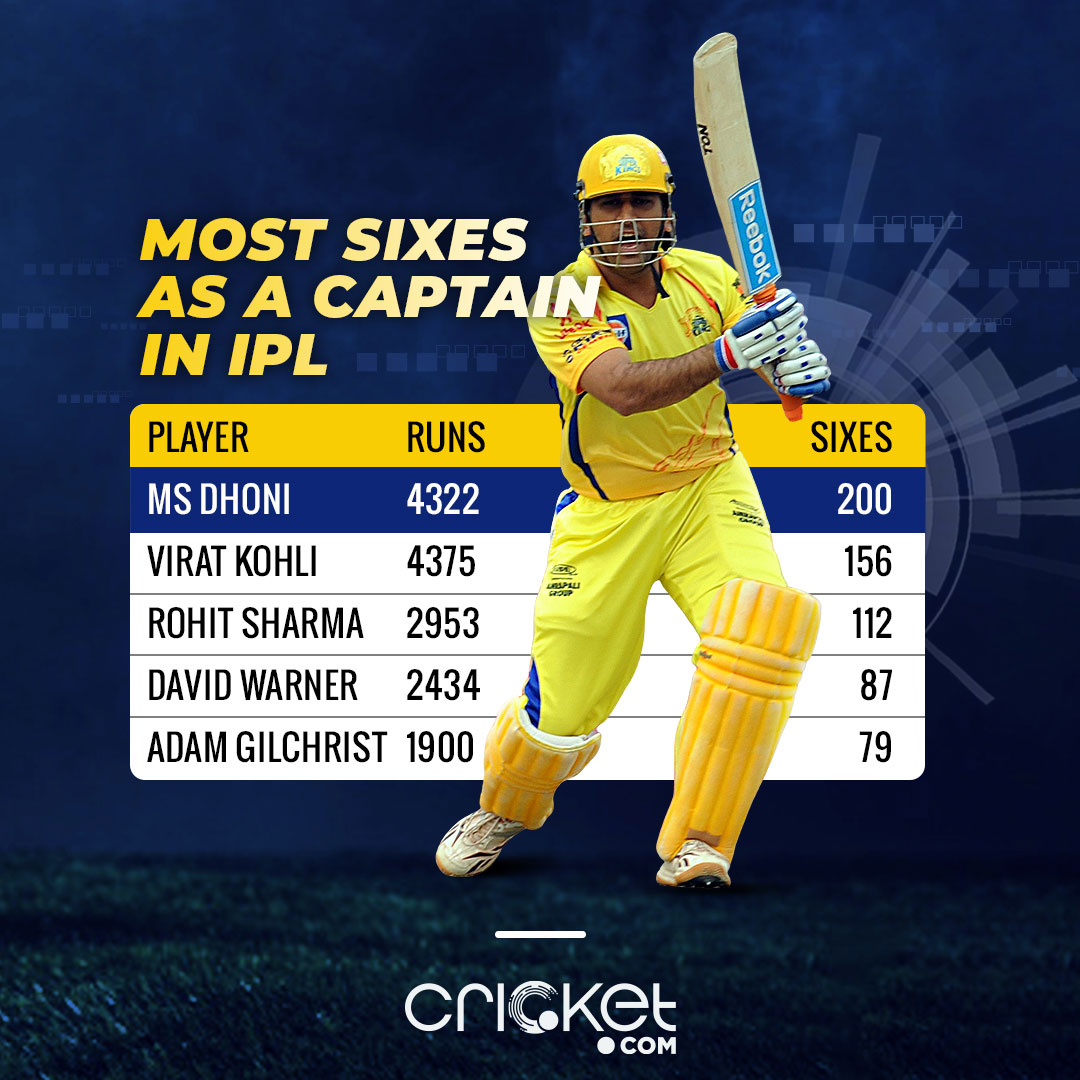 Third highest score for a number 7 batsman from CSK

In a disastrous season, Sam Curran has been a silver lining. With both bat and ball in hand, the youngster has made an impact. Even in their match against Mumbai Indians, the way CSK batsman fell apart, it didn’t look like they would bat out their full quota. In dire situations, the young allrounder put on board a 47-ball 52 to propel CSK to a score of 114. His innings was a good composition of both sensibility and aggression. His score of 52 batting at number 7, is the third highest score by a CSK batsman at that position. 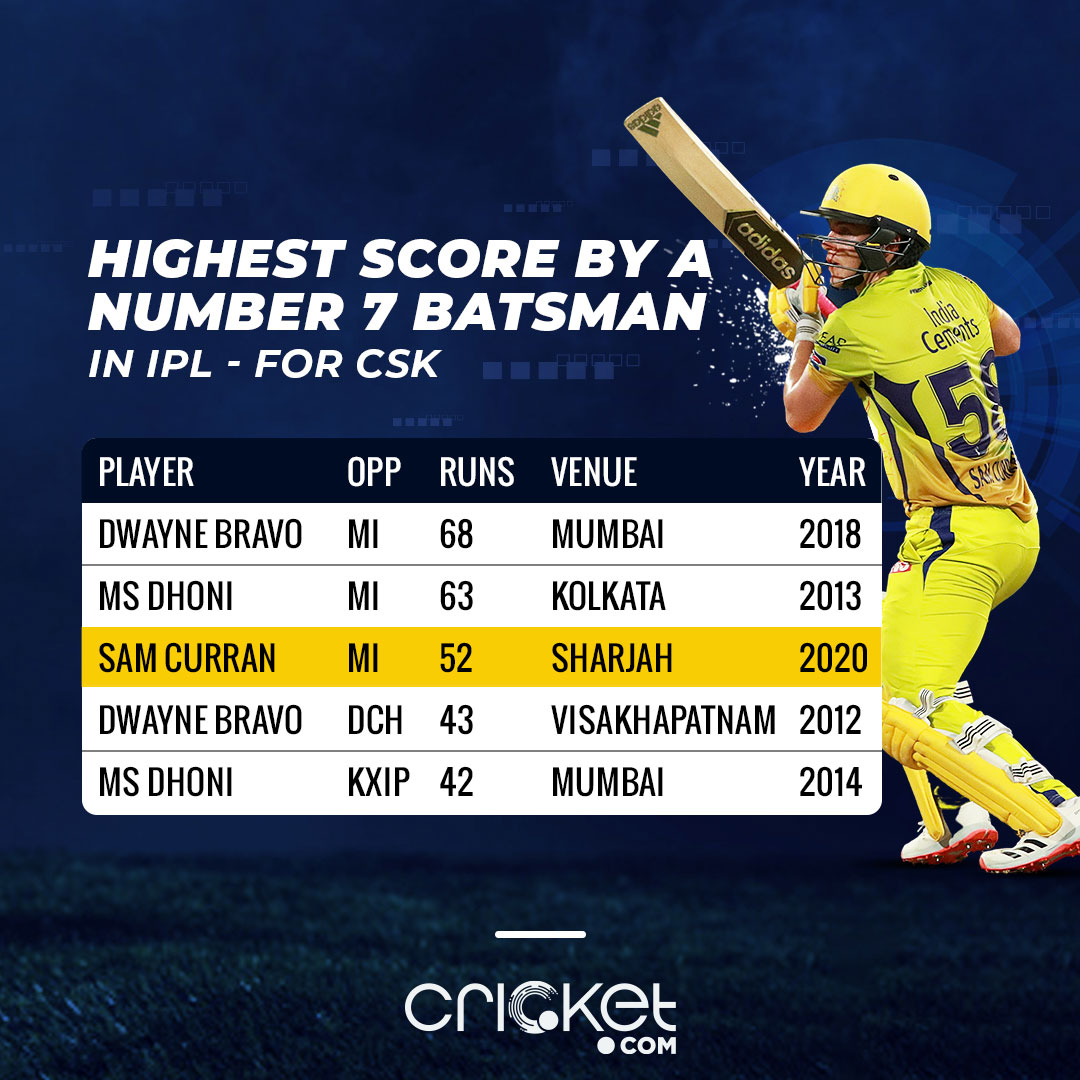 In this season of IPL, Sharjah has been a difficult ground for a bowler to excel. Irrespective of the conditions, Boult with the new ball is always deadly and today he was lethal. He started off with a wicket-maiden – the third bowler to a wicket-maiden in the first over this season – then picked up a wicket in his second over and his third. In the Powerplay itself, Boult had three wickets in three overs. In his last over, which was the last of the innings as well, Boult went for runs but bagged Curran off the last ball of the innings to complete a four-for (4/18). This was his first four-wicket haul in IPL and the best spell of this IPL. Previously, his partner in crime, Bumrah had figures of 4/20 against Rajasthan Royals, which was the best.

114/9 in this match and 125/5 in their previous match, that has been the story of CSK this season. At 24/5 at the end of the Powerplay, there was a possibility of CSK being all-out within their all-time low of 79. However, Curran’s half-century made sure that they avoided that. Everything has gone south for CSK this season. In a ground in which teams have fancied posting 200 this season, CSK could only manage 114, which is the fourth-lowest total. In the entire season, CSK have posted below-150 totals four times. 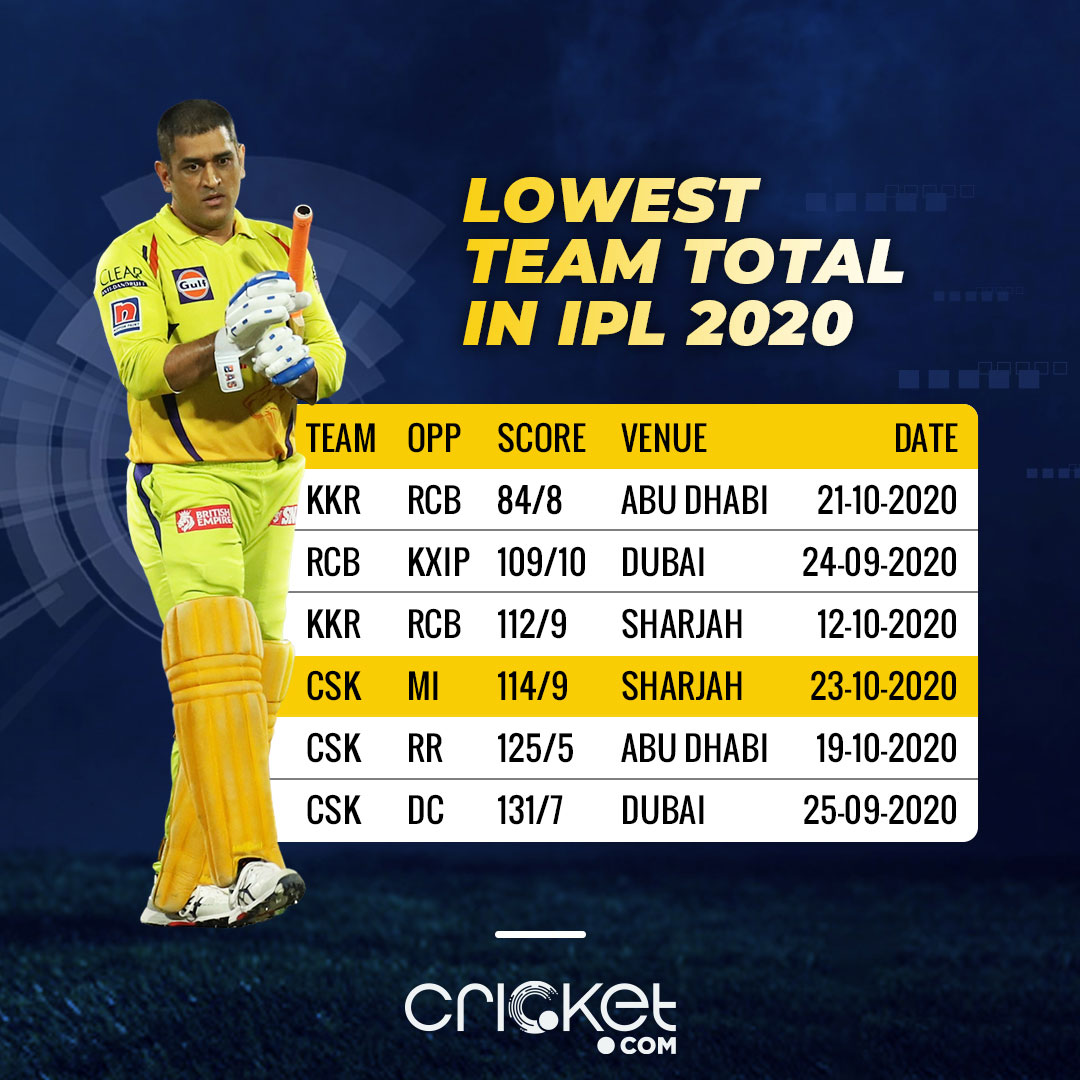 The one thing that makes MI a champion team is, every time a different player steps up to the task. Today, though they were chasing a small total, even in the absence of Rohit Sharma, the openers were exceptional. Promoted up the order, Ishan Kishan partnered with Quinton de Kock at the top. For a change, it was the young Kishan who was the aggressor. The openers posted a 116-run stand, which was the first of this season for MI. Previously, Rohit and de Kock had put on 94 runs against Kolkata Knight Riders in Match 32, which was MI’s highest for the first wicket.

Biggest win for Mumbai Indians in a chase in IPL

Courtesy of an unbeaten 114-run opening stand between de Kock and Kishan, MI registered a 10-wicket win with 46 balls to spare. For the second time in IPL, MI posted a 10-wicket margin victory. Previously, against RR in 2012, chasing a target of 163, Dwayne Smith and Sachin Tendulkar opening the innings were unbeaten throughout the chase. In their win against RR, they had 12 balls to spare and today, they had 46 balls to spare. Which meant, this win against CSK is their biggest in IPL while chasing. 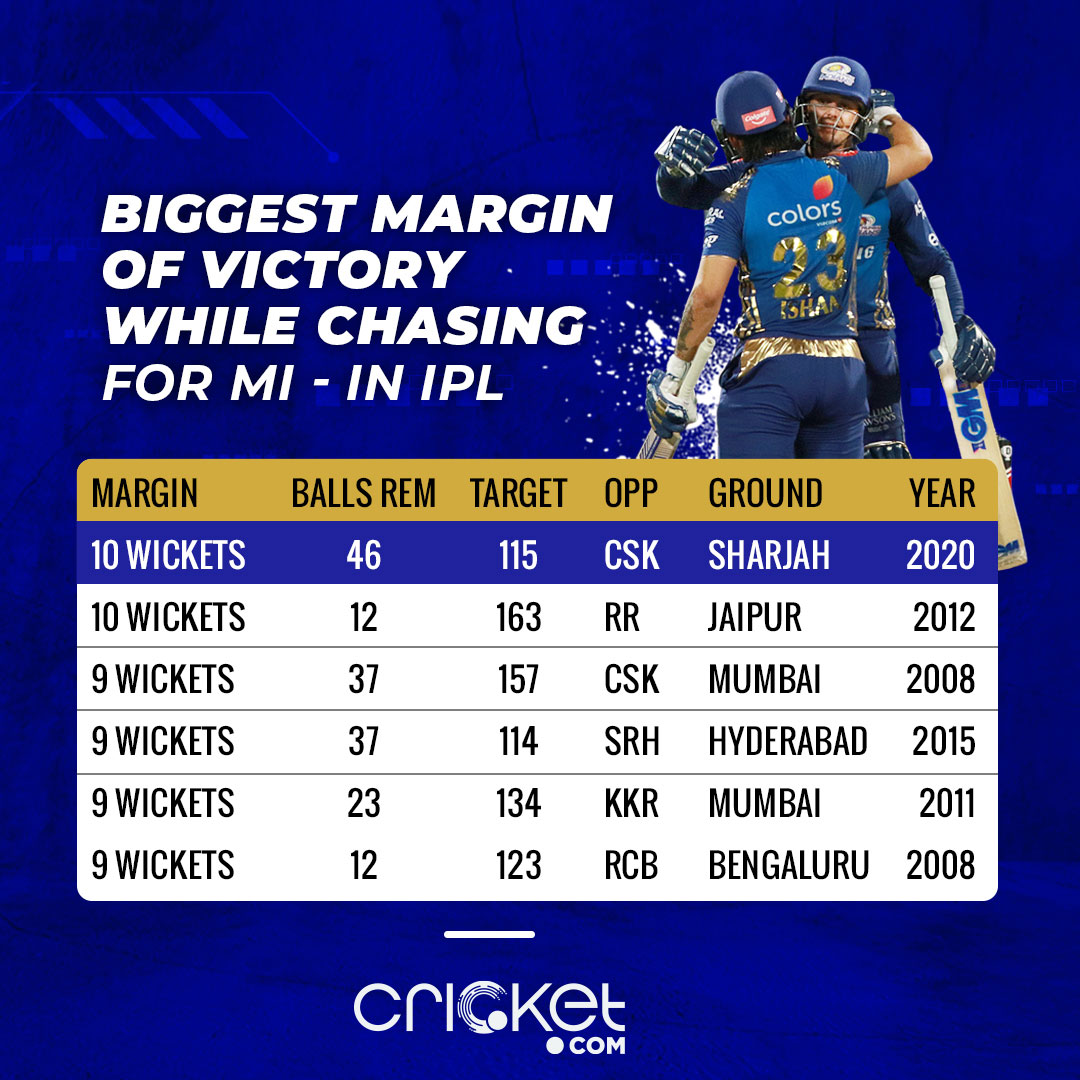 When nothing is going right, the things which haven’t happened tend to follow. That is exactly what CSK are experiencing now. First their worst Powerplay score, then a low score and to finish it off, their worst defeat ever. Never in their IPL seasons so far, CSK had seen the bottom of the table, but this season, they have been glued to it. After a dismal batting performance, CSK bowlers were left with nothing. Hence, they suffered a 10-wicket defeat, which is their first ever in IPL. Their previous biggest margin of loss was also against MI in 2008, when they were handed a 9-wicket defeat. 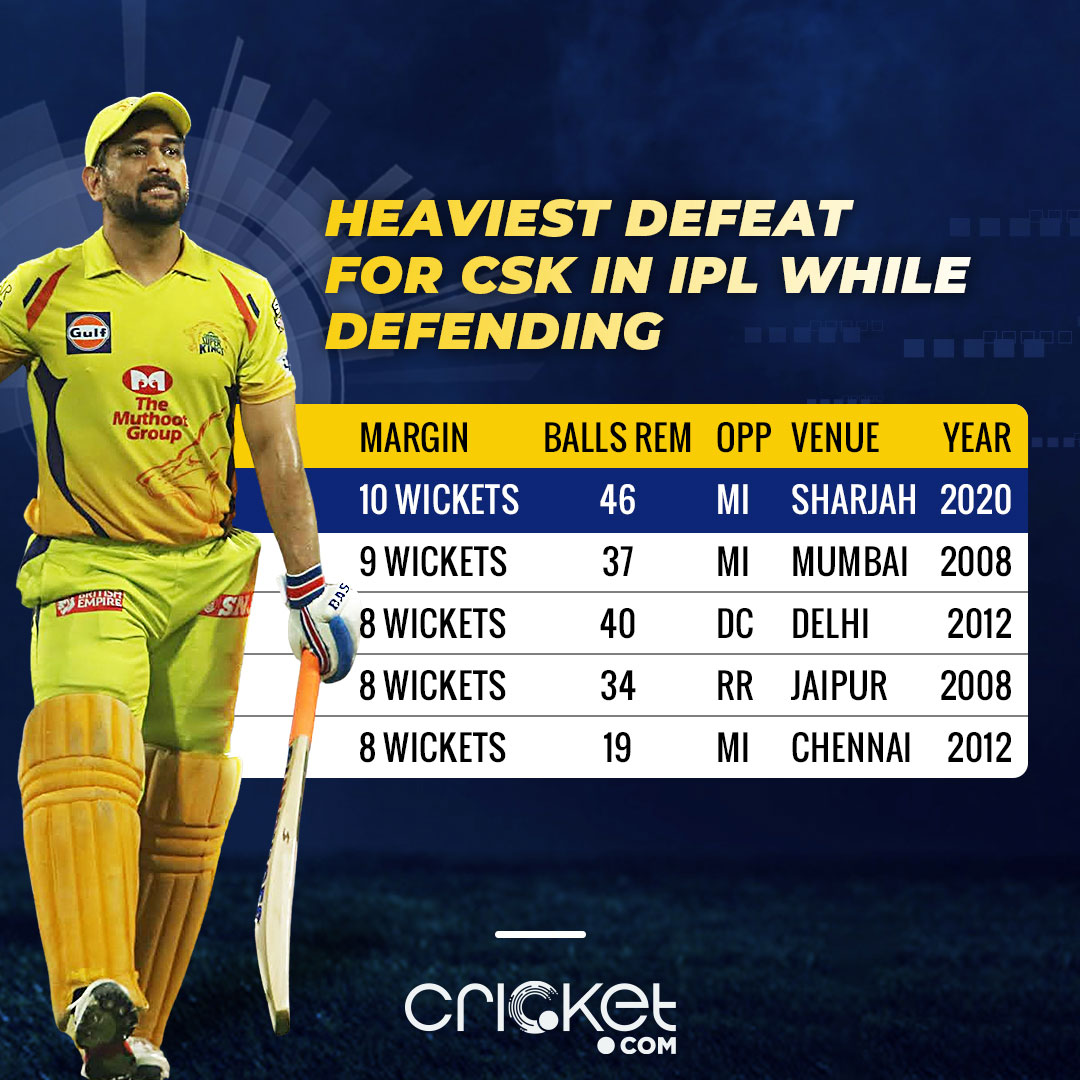