Mohammed Siraj creates history on a day to forget for KKR 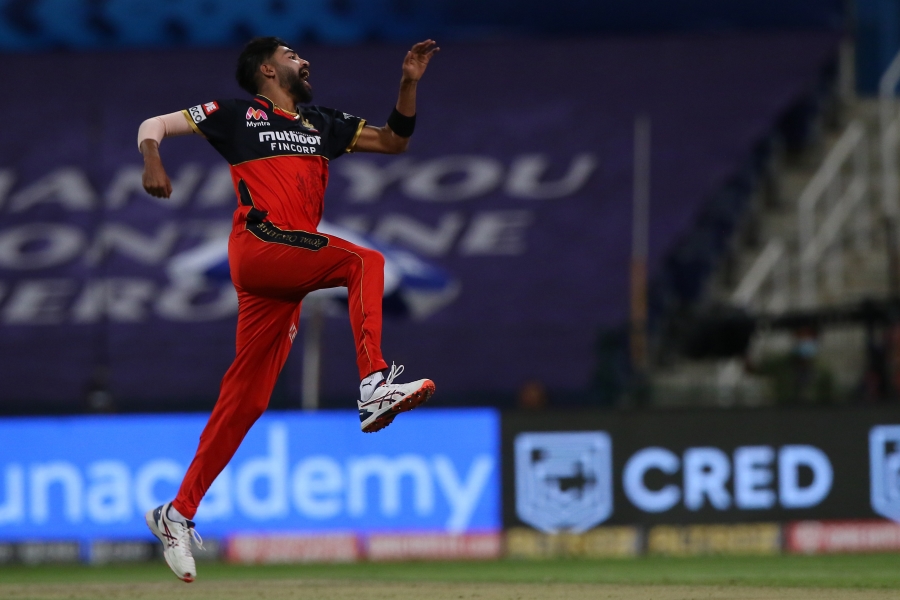 Mohammed Siraj creates history on a day to forget for KKR

Royal Challengers Bangalore and especially Mohammed Siraj had a day to remember against Kolkata Knight Riders in match 39 of IPL 2020. Here are the significant statistical milestones from the game.

First bowler to register multiple maidens in an innings

On the back of a disastrous spell against Kings XI Punjab. Mohammed Siraj was left out against Rajasthan Royals. Making a comeback against KKR, what a turnaround it was. Sharing the new ball for the first time in IPL 2020, Siraj bowled a double wicket-maiden to start off with. It didn’t stop there, in his second over – fourth of the innings – Siraj followed it up with yet another wicket-maiden. Hence, he became the first bowler in IPL to bowl two maiden overs in the same innings. Siraj’s double wicket-maiden was the second this season. Rashid Khan against Punjab bagged a double wicket-maiden in the 15th over. There are a few other fascinating records in Siraj’s spell.

Most maidens bowled in an innings by a team

Two maidens by Siraj, one by Chris Morris and one by Washington Sundar. How often do we see that in a T20? None is the answer in IPL. For the first time in an innings in IPL, RCB bowlers had bowled more than two maidens. There have been several instances of two maiden overs in an innings. Today’s four by Bangalore bowlers is the most in IPL.

If a team has bowled three maidens up front in the Powerplay, obviously, the team batting would have had a hard time scoring runs. In total, there were 28 dot balls bowled in the first six overs of KKR's innings. Kolkata crawled to a score of 17 after losing four wickets in this phase, thanks to a 10-run over by Navdeep Saini that was possible. This score of 17/4 is the fourth-lowest Powerplay score in a completed 20-over match of IPL. To add to Kolkata’s misery, this was their lowest score in IPL during this phase. Rajasthan Royals had scored 14/2 in Cape Town in 2009 against Royal Challengers Bangalore. 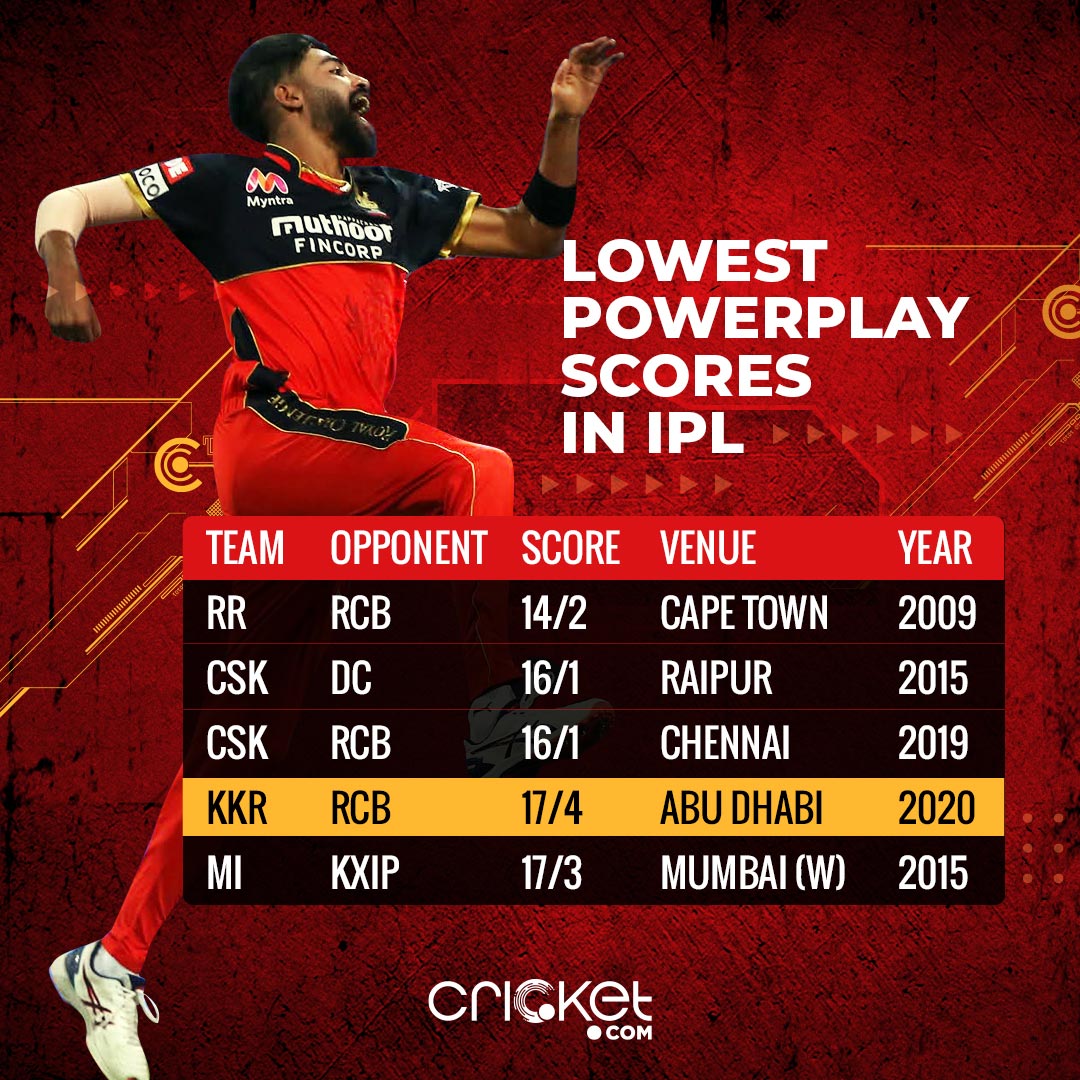 It has been all lows for KKR in today’s match. At the start, they recorded their worst Powerplay score in IPL. Later on, failing to pile the runs, Kolkata floundered to their fifty in the 15th over of the innings. Previously, Kings XI Punjab against Chennai Super Kings had reached their fifty in 13.1 overs, which was the slowest. Today, Kolkata when they reached the landmark in the 15th (14.6) over, they became the slowest team to score a 50. 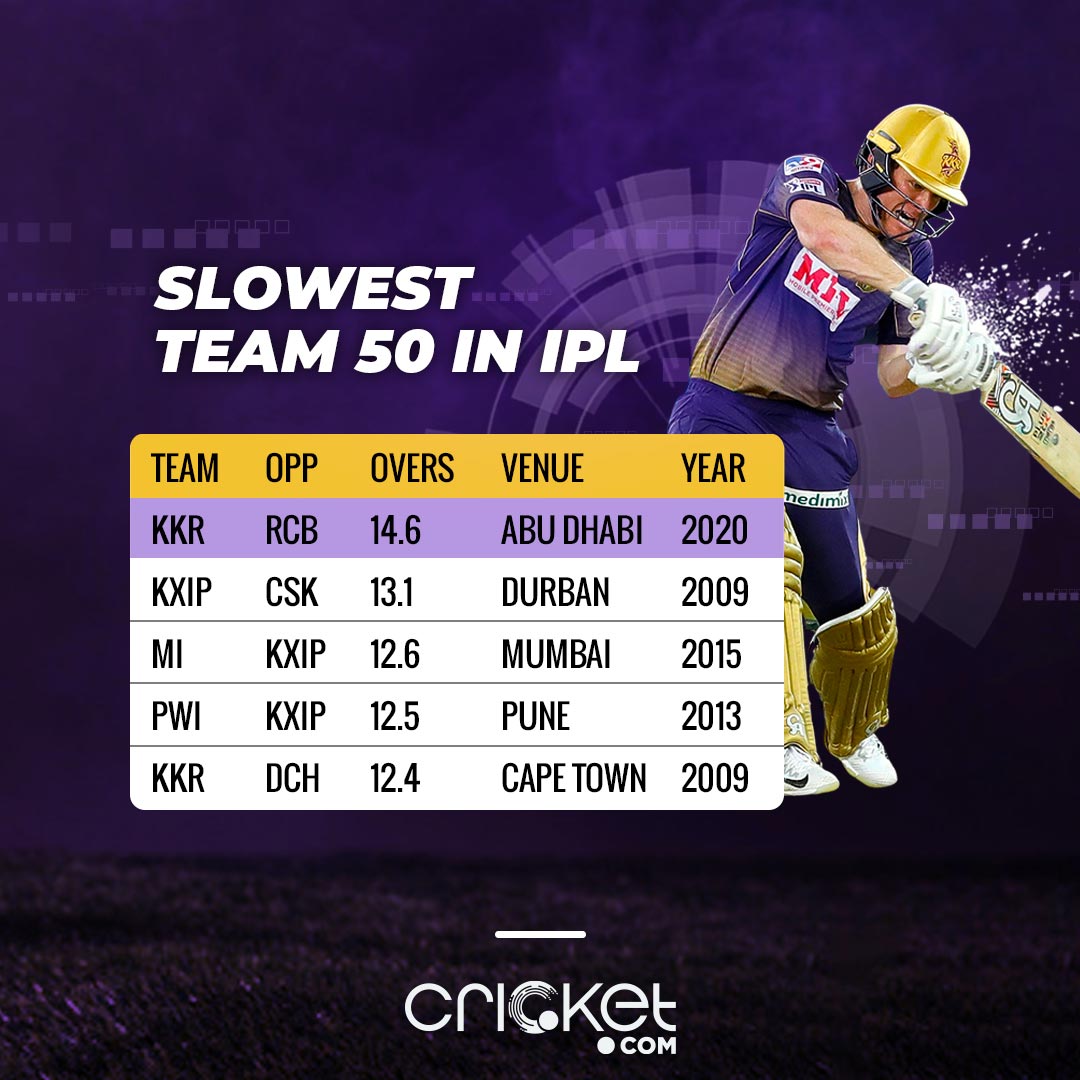 KKR had lost half of their side within the first 10 overs. Although they managed to play the full quota of their overs from a grave situation, there was not enough fuel to motor past an excellent RCB bowling unit. In the end, Kolkata could post only 84 runs for the loss of eight wickets, which is the first sub-100 total in this season of IPL. Adding salt to the injury, this is the lowest team total in IPL after batting out the full quota of 20 overs. Prior to Kolkata, KXIP had posted 92/8 against CSK after playing all 20 overs in Durban in 2009, which was the lowest. 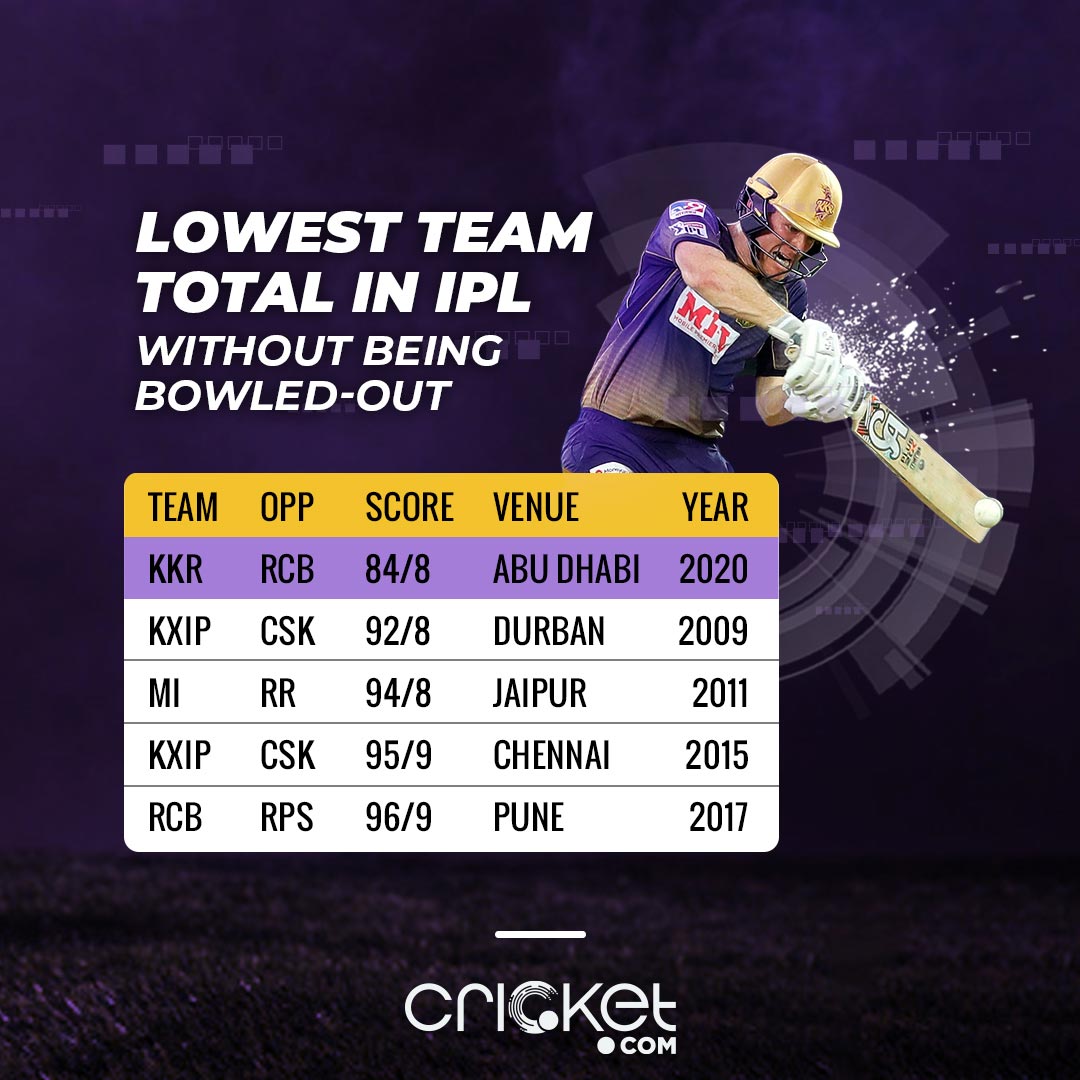 Second most economical spell by a RCB bowler

It was a day that will be etched in gold in Siraj’s cricketing career. Generally, Siraj is not known for economical spells, his IPL career economy of 9.4 prior to the match was a proof of it. However, it was a different story when he opened the bowling in Match 39. Started off with consecutive maiden overs, then followed it up by two runs in his third ending the spell with two runs and three wickets in three overs. By the end of his fourth over, Siraj had conceded eight runs at an economy of 2.0. Among bowlers who have completed their full quota of four overs, Siraj’s spell is the second-most economical spell by a RCB bowler in IPL.

Heading towards the business end of the tournament, this was the kind of victory that RCB were looking for. Though they had 12 points prior to this match, their net run-rate was in the negatives. But, after an 8-wicket win with more than six overs to spare, their NRR has boosted to +0.182. Hence, increasing their chance of making it to the playoffs. The 39-ball margin win for Bangalore is their biggest margin of victory while chasing against Kolkata in IPL.

STAT NUGGETS
KL Rahul posts slowest half-century of IPL 2020; CSK achieve their highest partnership for any wicket
Here are a few noteworthy statistical milestones from the games between MI and SRH and KXIP and CSK