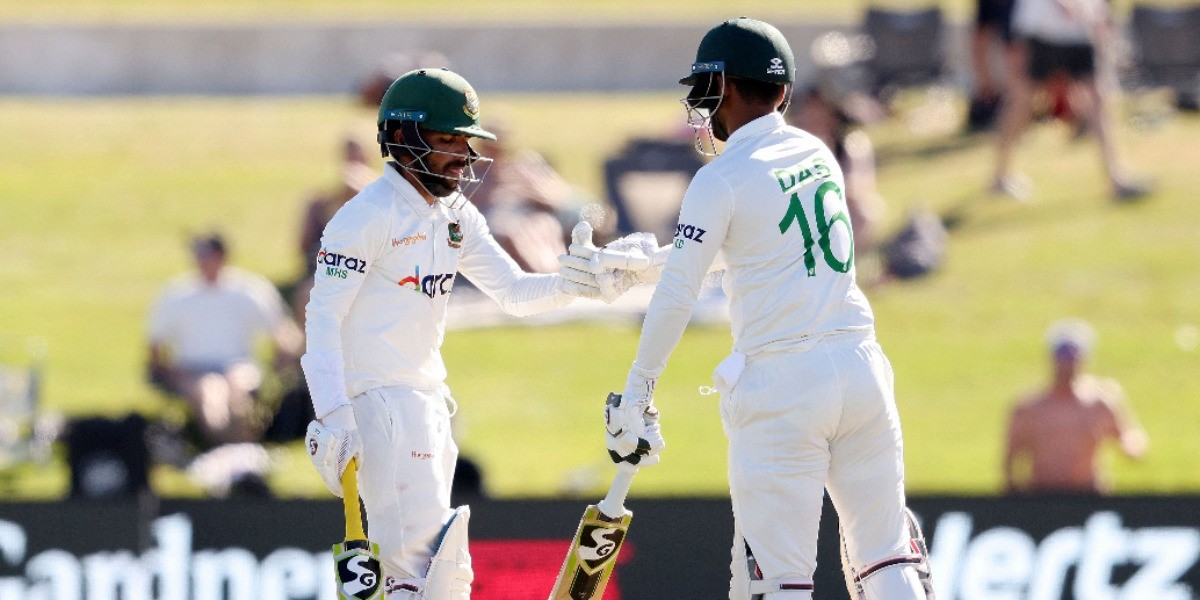 At stumps on day three Bangladesh were 401 for 6 in reply to New Zealand's 328, a lead of 73 with four wickets in hand

Mominul Haque and Liton Das led Bangladesh to a historic first innings lead over New Zealand in the first Test on Monday (January 3) before both fell to Trent Boult in a dramatic final session at Bay Oval, Mount Maunganui.

They had reached 361 for four before Boult ended a 158-run stand with the wicket of Mominul for 88, followed 11 deliveries later by Das for 86.  It is the first time Bangladesh have taken a first-innings lead batting second outside of Asia.

They led New Zealand at Wellington four years ago when batting first, although a disastrous second innings saw them lose that Test by seven wickets.  It has been an exceptional Test for Mominul, a part-time spinning option who dismissed New Zealand's top two run-scorers Devon Conway and Henry Nicholls and then batted through 244 deliveries as he notched his 15th Test half-century.

Mominul rode his luck with the bat, surviving multiple chances as he put his side in a strong position before being trapped lbw by Boult.  He had the decision reviewed but there was no doubting the outcome as Boult's inswinger crashed into the back pad in front of off stump.

Mominul's innings included 12 boundaries to all corners of the ground and his partnership with Liton kept New Zealand wicketless for more than 52 overs.  Das, like Mominul, also struck boundaries on both sides of the wicket, as well as straight down the ground and he had 10 fours to his credit before edging Boult to wicketkeeper Tom Blundell.

Boult had switched to around the wicket and with the ball heading outside off stump Das could not resist an attempted cut and sent a thick edge the keeper. Bangladesh batted cautiously in the morning session, only scoring 45 runs for the loss of classy opener Mahmudul Hasan Joy for 78 and Mushfiqur Rahim for 12.

Joy added eight to his overnight 70 before Neil Wagner had him caught at gully while Boult bowled Mushfiqur.

Mominul and Liton added 87 in the middle session and Bangladesh put on 94 between tea and stumps. The not out batsmen at the close were Mehidy Hasan on 20 and Yasir Ali on 11.