Most impactful spells in IPL 2020 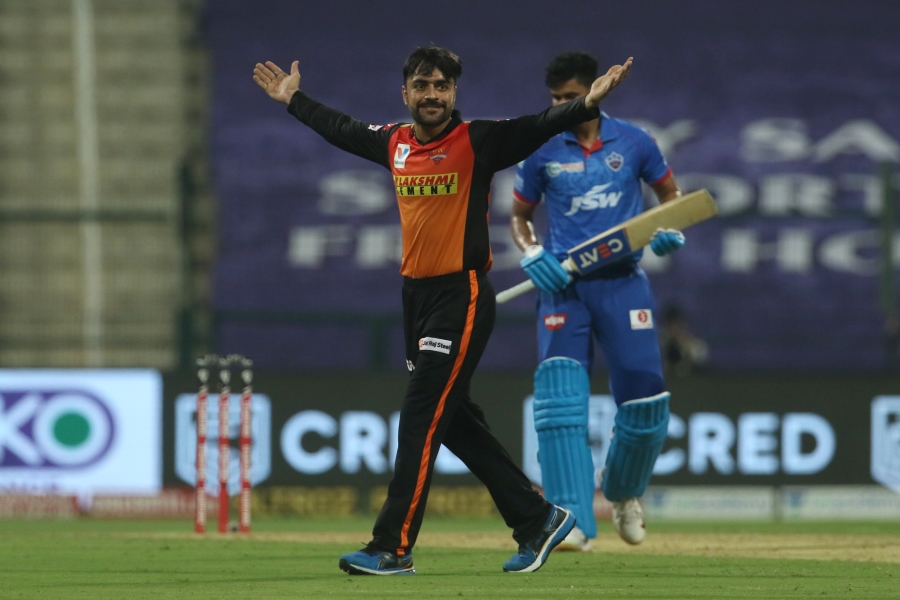 Most impactful spells in IPL 2020

31 matches and a little over half the tournament completed, we review the best spells in the tournament that had the highest win% impact. A point to keep in mind is that this list only looks at the impact the spells had on win%. The complete comprehensive match score is accumulated and shown in our MVP player list (which includes wickets, economy rate, dots and the impact on win% each of the balls delivered).

So what does that exactly mean?

A bowler could take a 4 wicket haul, and could still not make it to the top bowling figures, because most of the wickets came after the game had completely tilted in their favour. Those wickets did not have any major swing in chances of winning. An example would be Kagiso Rabada and Jasprit Bumrah’s 4 wicket hauls. A majority of their wickets came after the other bowlers had almost finished the game, and there was no chance of winning for the opposition at that point. Their spells were ranked #117 and #61 in our impact list, with an impact score of +9 and +3.

Wait, what is an impact score?

How does it help seeing this bowling impact score?

We’ve often seen in Fantasy sport, the undue importance of the value of a wicket. A great spell with dot balls is often not rewarded, despite the spell making a huge difference in the outcome of a game. Bowling at the Powerplay and the death, often bowlers concede very different runs. 5 an over in the Powerplay and 8 an over at the death, could perfectly be okay. The win% impact takes all of this into consideration.

How different is this from your Match Report Card or MVP?

The MVP (Most Valuable Player) is an accumulation of Match Report card scores. It measures consistency and value of the player to the team. It includes elements from a scorecard and the win% impact applied to each ball bowled by a bowler. So a Bumrah’s 4 wicket haul would get the importance for the 4 wickets he took, but also would not be high on an impact score for the wickets. So for that match it gives a comprehensive view of who performed best amongst the 22 players on a simple normalised 10 point scale.

So which were the Top 10 bowling performances?

As of Match 31, the best performances by bowling impact alone are the following: 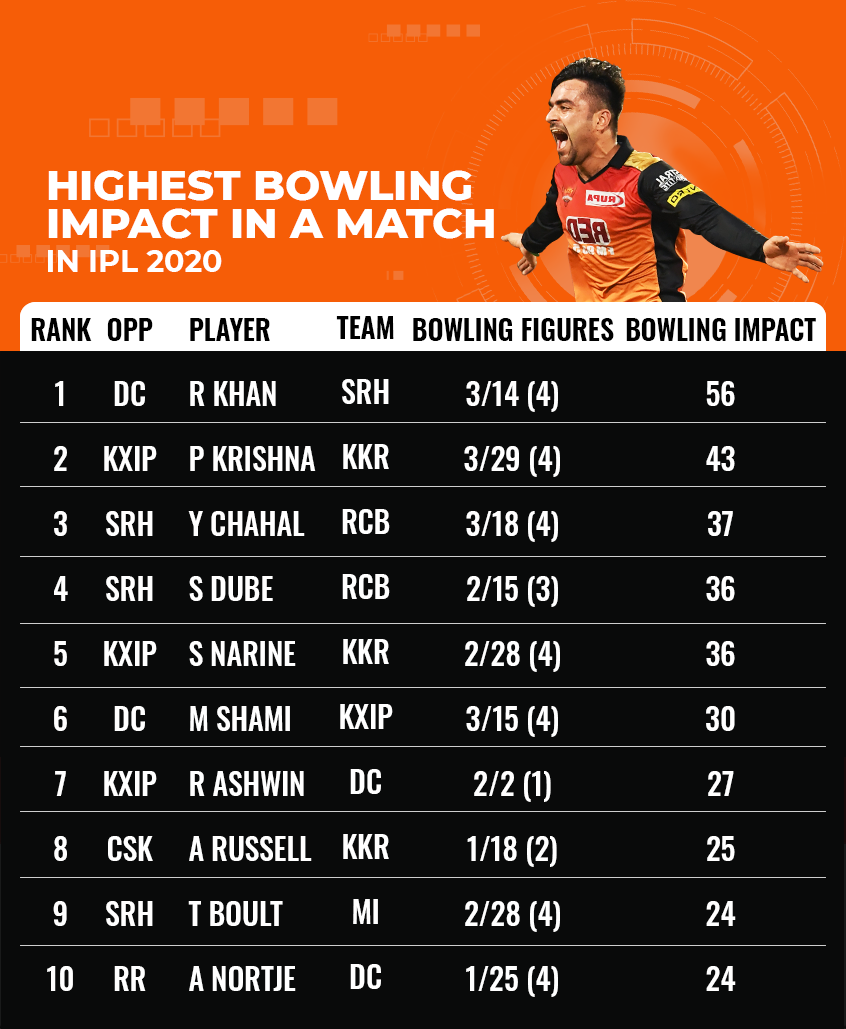 Rashid Khan’s spell is top-rated in our bowling impact scale for the sheer impact it had in swinging the match in favour of Hyderabad. His wickets were Shreyas Iyer and Shikhar Dhawan early on, and then he came back at the death to account for the wicket of Rishabh Pant.

13 dots in a 24-ball spell, with important wickets! Delhi were coasting after a good start, and had a 56% chance of victory when Rashid came in and delivered a 2-run over, accounting for the wicket of the captain Iyer, who later said in the post match interview, that he found the wicket two-paced, and he should have targeted on getting doubles in a big ground rather than eyeing the long boundary.

3 very important wickets, that never quite allowed Delhi to get on top, and it made him the top performer for that game. Rashid’s spell created the unique situation that by game 11 in a 56- match group stage, all the sides had achieved at least 1 victory. Rashid had turned in his best ever IPL performance with his fourth 3-wicket haul. 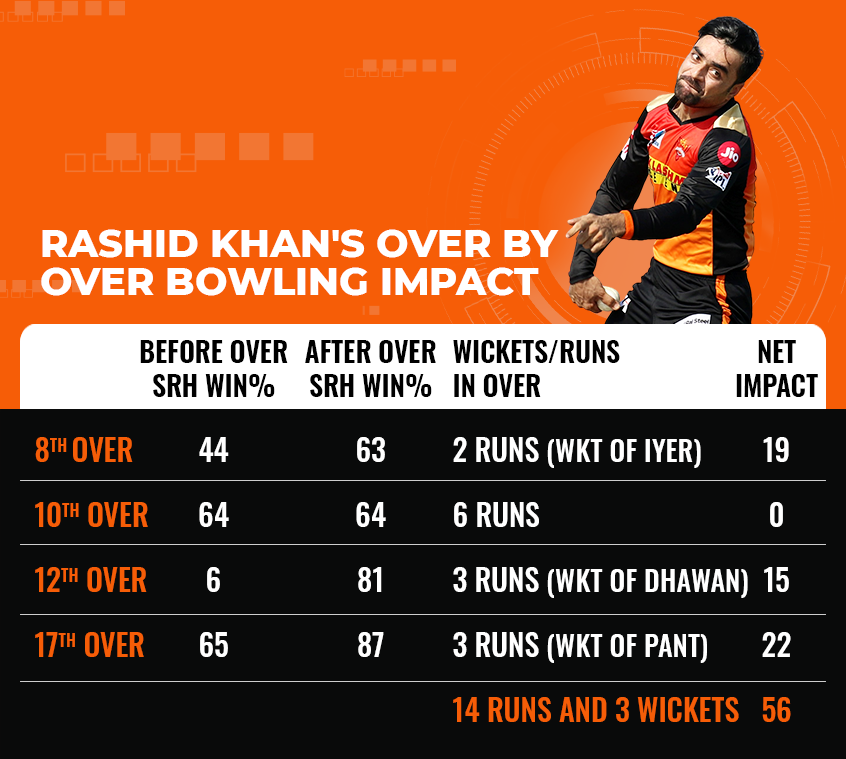 #2 and #5- Prasidh Krishna and Sunil Narine

We have combined these entries since these were from the same game. A game that KXIP should have closed much earlier, but they let it drag on and they ended up with an own goal, and sometimes the habit sticks like it did the other night against RCB. KXIP were also up against two champion bowling performances. 8 overs from Prasidh Krishna and Sunil Narine, and KXIP scored just 57 off them, losing 5 wickets. 113/0 (14) in a 162 chase. 9 times out of 10, you would breeze. KXIP bypassed all those 9 possibilities and settled in on the 10th.

For two bowlers whose first 2 overs each were all negative impacts, to come back with so much elan and pomp, underscored the importance of quality bowlers who could create unforced errors from batsmen. One wonders, if Mayank Agarwal had got a bit more wood on the ball off Prasidh, would it have sailed over Shubman Gill? Would the script have been very different? Mayank’s wicket gave some hope, but Nicholas Pooran and KL Rahul still wrested momentum back.

KXIP’s decision of sending Prabhsimran Singh to get some match time, backfired in the worst possible manner, giving lesser time for Glenn Maxwell to finish the game off. It allowed KKR to get back into a game they had 6% chance of winning when the 18th over began. 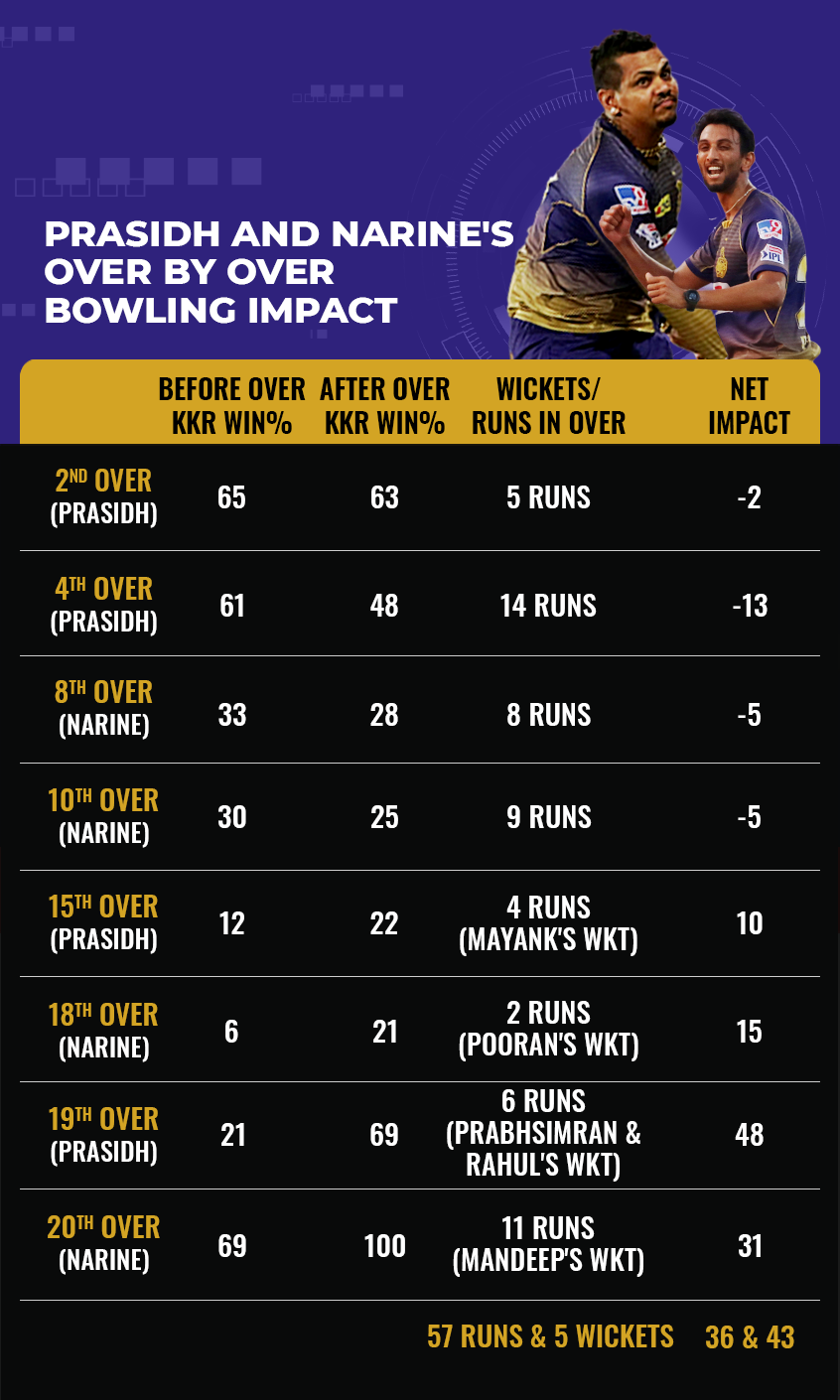 #3 and #4- Yuzvendra Chahal and Shivam Dube

Another bowling performance that two bowlers delivered a knockout punch to the opposition in the same game. Another story of a heist performed defending a 160-165 range total, where the chokers were SRH and the beneficiary was RCB. While the win% rose under Yuzvendra Chahal and Shivam Dube, they were ably supported by Navdeep Saini (Ranked 36th with an impact score of +15). 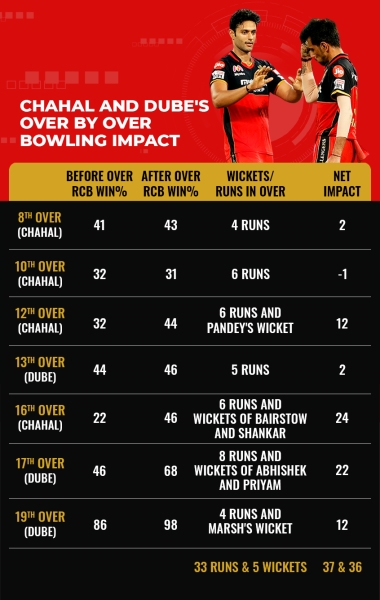 Has this win% narrative helped you make sense of bowling performances and the impact it has on the game? Here’s the earlier piece on most impactful knocks in the first half of the IPL.

Use #CricketLikeNeverBefore on Twitter and let’s continue the conversation there!