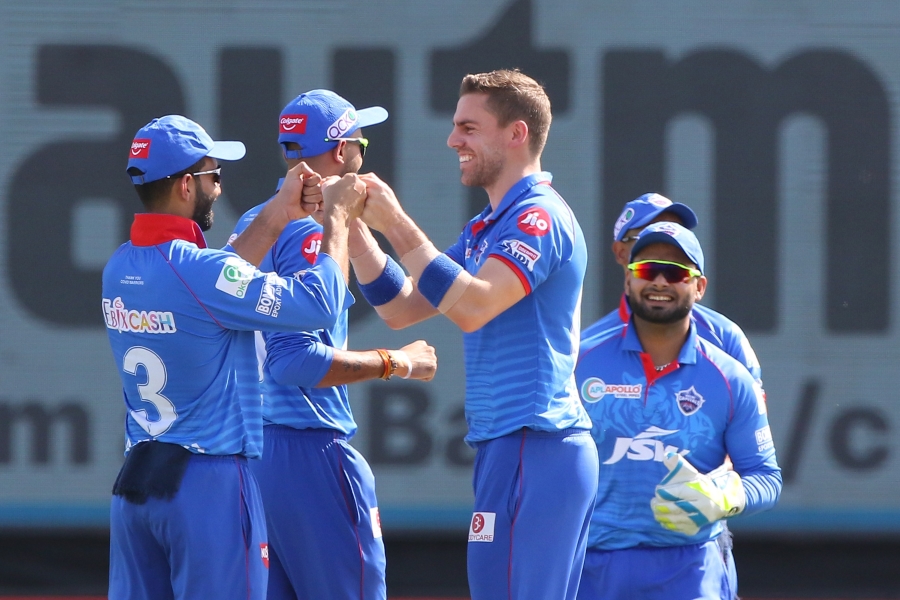 After 56 league stage matches, it finally comes down to the last four, beginning with Qualifier 1 between defending champions Mumbai Indians (MI) and Delhi Capitals in Dubai. While MI finished with 18 points in the league stage, DC were not far behind, having secured 16 points. However, the form of the two teams have been quite contrasting. MI have won three out of the last five matches in IPL 2020, while DC have won just once.

In their 26 meetings in the IPL, Mumbai have won 14 while DC have tasted victory 12 times. MI have beaten DC on each of the last three occasions and have a slender 3-2 lead in the last five matches. 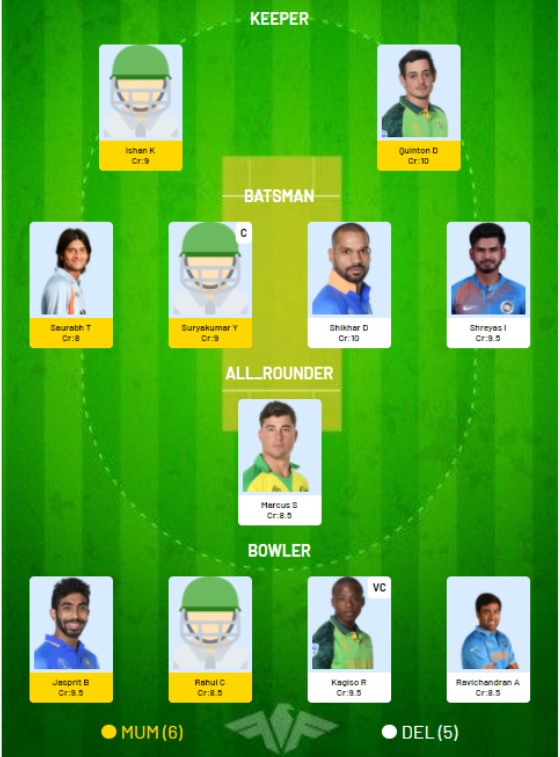 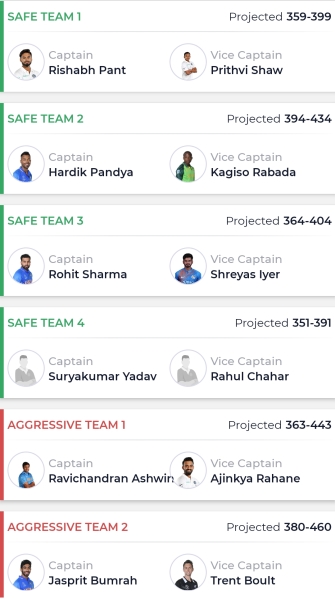 Dubai has hosted the most number of matches (24) in the IPL so far. The batsmen have scored at a run-rate of 8.1 and a wicket has fallen every 29.2 runs and 21.8 runs apart – both of which are the best among all three venues this season.

Batting first has been the way to go in Dubai as teams chasing have won just nine matches here so far. The stats too back the fact as the teams batting first have scored at a run-rate of 8.6 with a wicket falling every 32.3 runs and a gap of 22.7 deliveries. While chasing, the corresponding numbers are 7.8, 23.2 and 17.9 respectively.

The average first innings score this season in Dubai has been 171, although in the last five matches, from the range of 110 to 219 have been scored at the venue. The average target chased in IPL 2020 here has been 162 and if the team batting first reach this or maybe 5-10 runs more, they could easily make a match of this. 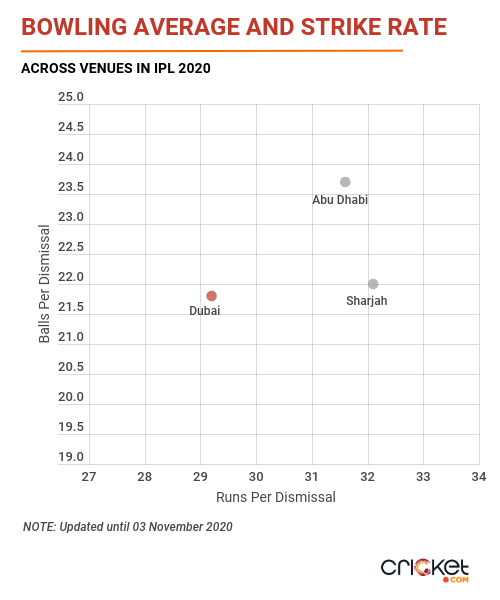 Dubai has witnessed the least share of wickets among pacers (65.6%) and the most for spinners (34.4%) among all three venues used this season. The fast bowlers have struck every 20.1 deliveries, 28.5 runs apart, while the spinners have picked up a wicket every 30.6 runs, 24.9 balls apart.

The economy rates of pacers (8.5) and spinners (7.4) should not make much of a difference in picking your team, but given that Dubai is also not particularly bad for spinners, a couple of quality spinners in your team could help you. There are no shortages in this department on either side. 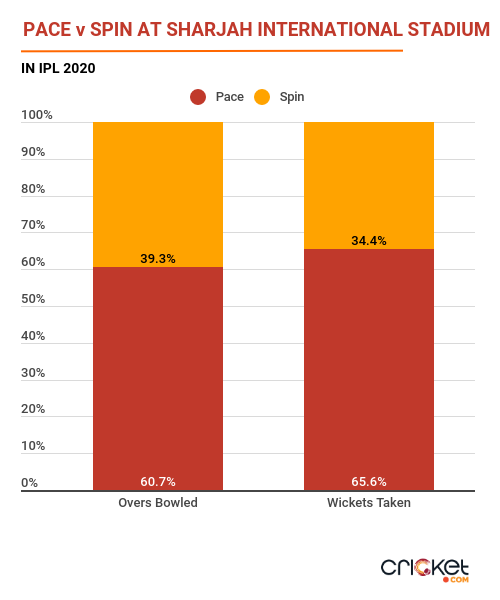 The battle between Quinton de Kock and Ravichandran Ashwin could be a fascinating one. In IPL 2020, de Kock has faced 18 balls from Ashwin and has scored at run-a-ball, with the offspinner getting the better of the MI opener in Abu Dhabi. Overall, Ashwin has dismissed the South Africa wicketkeeper-batsman thrice in five innings and at the same time, hasn’t leaked runs at an alarming rate as well. 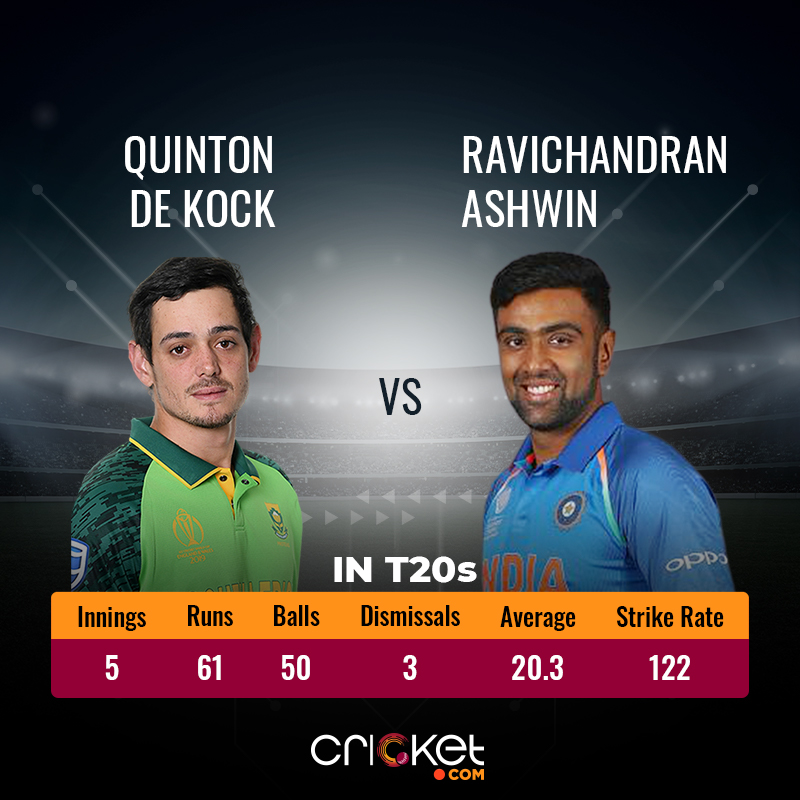 In their previous battle, Trent Boult dismissed Shikhar Dhawan for a duck in Dubai, but overall, the DC batsman has been in excellent touch against Boult in the shortest format. Dhawan has scored at an average of 41 and strike-rate of over 141 against the New Zealand pacer. Given the form Boult has shown in the opening six overs this season, it will not be a surprise to see him improve his record against Dhawan. 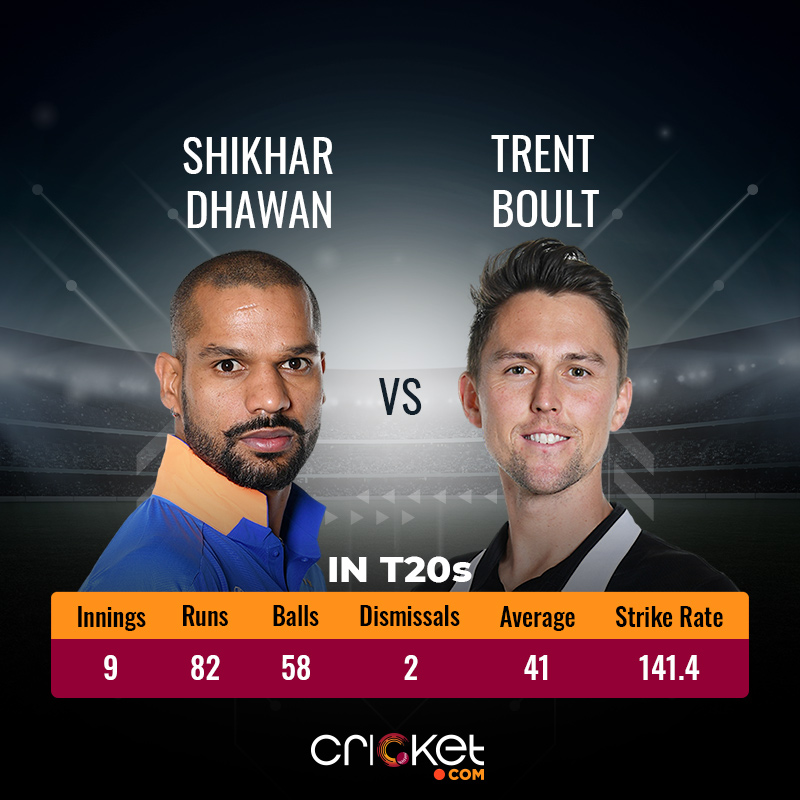 Only Yuzvendra Chahal (15) and Rashid Khan (18) have picked up more wickets than Rahul Chahar (13) in the middle overs this season. This does not work out well for Shreyas Iyer, who has been dismissed by the legspinner twice in three innings. Chahar got the better of the DC captain in Dubai earlier this season, off the very first ball and moreover, he has conceded just seven runs from 11 balls against Iyer. The onus will be on Iyer this time around to set the record straight. 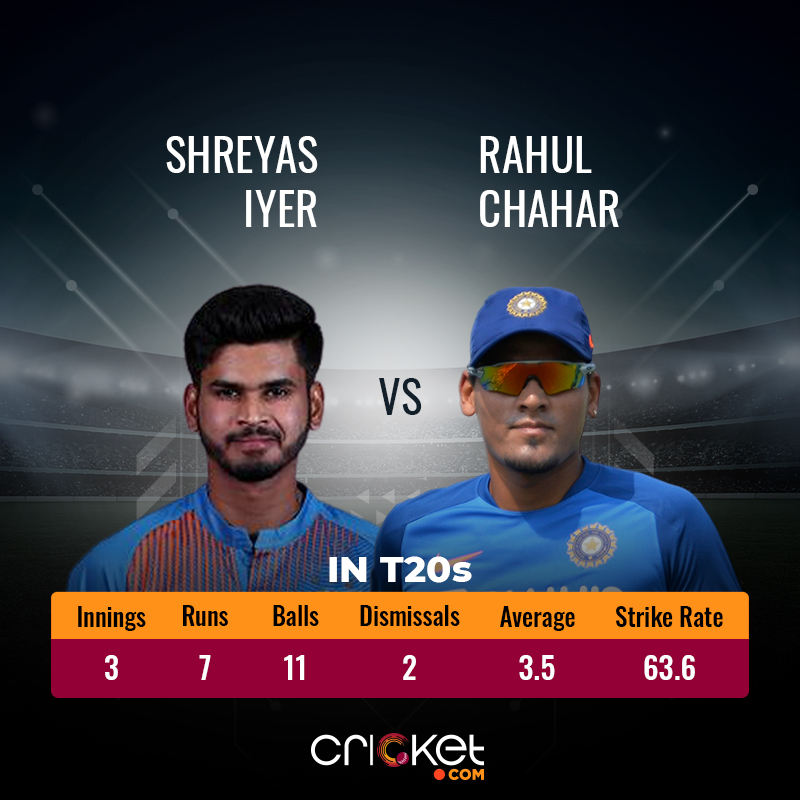 In Suryakumar Yadav, MI have a reliable batsman, who can bail them out in tricky situations and at the same time, can explode when the situation demands. He is one of three MI cricketers to have scored 400-plus runs this season. His 410 runs have come at a strike-rate of over 150 and at an average of 41. Only Quinton de Kock (4) has scored more fifties for MI this season than Surya. His last five scores include 36, 12*, 79* and 40 implying that he is in great touch and might come good in this match once again.

Our Criclytics player projection predicts, Suryakumar could score 14-37 runs in this match.

Former KKR captain Gautam Gambhir has however picked Quinton de Kock as his captain for this match. Here's a look at his full team:

While Trent Boult has been instrumental in delivering in the Powerplay, it has been Jasprit Bumrah who has been top class in the middle and more so at the death. Bumrah has picked up six wickets in the middle phase, the second-highest for a pacer and in the death, his 12 wickets are the second-best overall. Bumrah might have been rested in MI’s final game in the league stage, but he is still very much in contention to snatch the Purple Cap back from Kagiso Rabada.

Our Criclytics player projection predicts, Bumrah could pick up 1-2 wickets in this match.

The current Purple Cap Holder with 25 scalps in 14 games, Kagiso Rabada had a couple of poor games – against Hyderabad and Mumbai – but bounced back extremely well in the game against Bangalore with 2 for 30. Rabada has the most wickets in the middle-overs among pacers (8) and at the death he is well ahead of every bowler with 16 scalps, making him a must-have in your team. He is well supported by fellow South African Anrich Nortje as well, but Rabada has been Shreyas Iyer’s go-to bowler in crunch situations and he has rarely failed.

Our Criclytics player projection predicts, Rabada could pick up 0-1 wickets in this match.

Two back-to-back centuries followed by three single digit scores and then a crucial 54 against RCB – it is safe to say, Shikhar Dhawan’s season has been a topsy-turvy one. Dhawan is DC’s leading run-scorer with 525 runs, only four behind Warner in IPL 2020. His half-century against RCB puts him in good stead to perform well in this game, despite his failures in the three matches before that. Dhawan has performed well in Dubai, where he has scored 230 runs at a strike-rate of nearly 150 this season. Also, one of his two centuries came at this venue. DC will look to him to provide the team with a good start.

Our Criclytics player projection predicts, Dhawan could score 14-37 runs in this match.