Mumbai aim for bowlers to strengthen a near-perfect squad 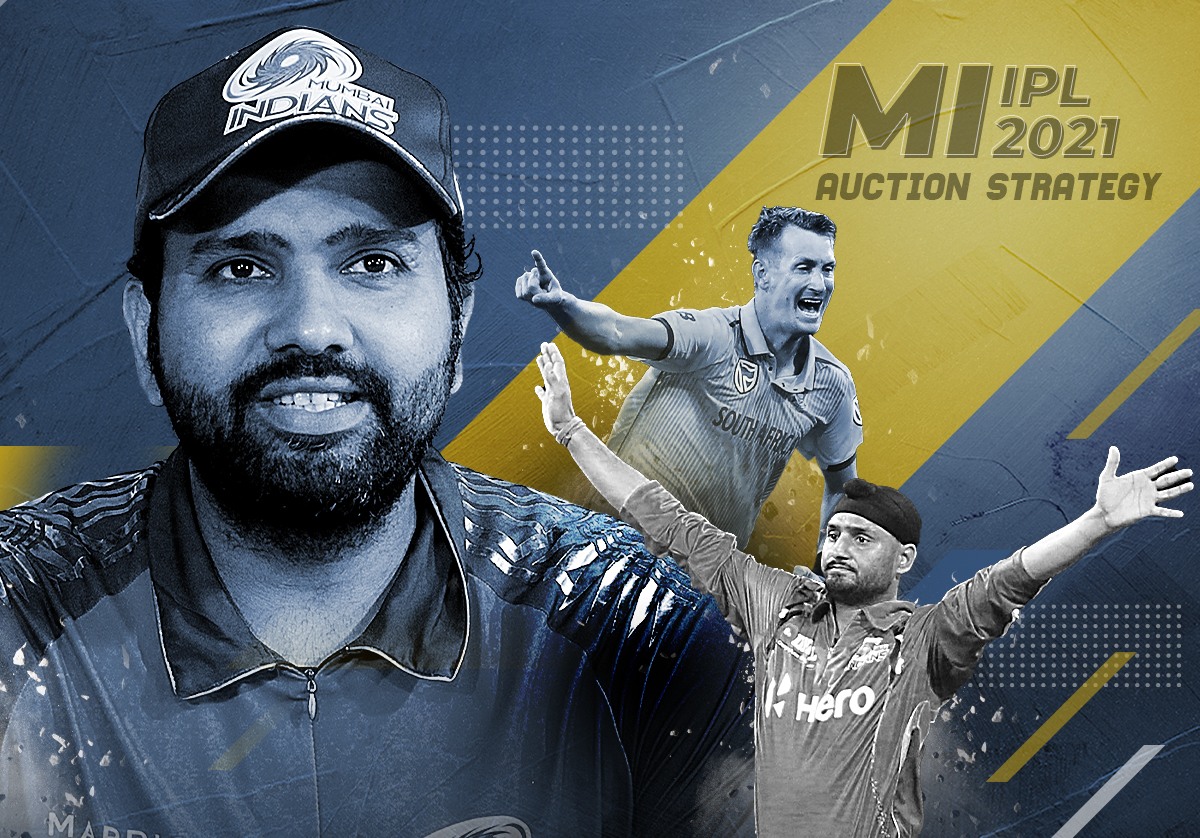 Mumbai aim for bowlers to strengthen a near-perfect squad

Teams who do the best in terms of player retentions, especially when it is not before a full auction, are generally the ones which have to do the least. There is no doubt that Mumbai Indians is one of those sides, owing to their numero uno status not only in the competition but in the T20 circuit across the globe. Other sides, in IPL 2020, showed some sort of vulnerability at certain points except Mumbai who continued to be a strong force despite losing their captain for a few games, which answers why they have little to tinker with their squad.

MI still went on to release seven members and you cannot question them on any of those calls. Lasith Malinga did not take part in the 2020 edition and announced his retirement. Sherfane Rutherford, Digvijay Deshmukh and Prince Balwant Rai Singh were amongst the few who did not get a game. The other three releases comprised of three overseas pacers - Nathan Coulter-Nile, James Pattinson and Mitchell McClenaghan. None of them offered Mumbai much on a consistent basis and McClenaghan did not feature in any of their 16 matches. Pattinson played most games amongst the seven players to be released but currently nursing an injury, Mumbai found it best to let the injury-prone pacer go. The right-arm seamer did not register for the upcoming auction.

Overall, Mumbai offloaded five overseas and two uncapped players. The scary thing is despite releasing seven players from their squad, they have their first choice XI on paper.

MI best XI based on the current squad- 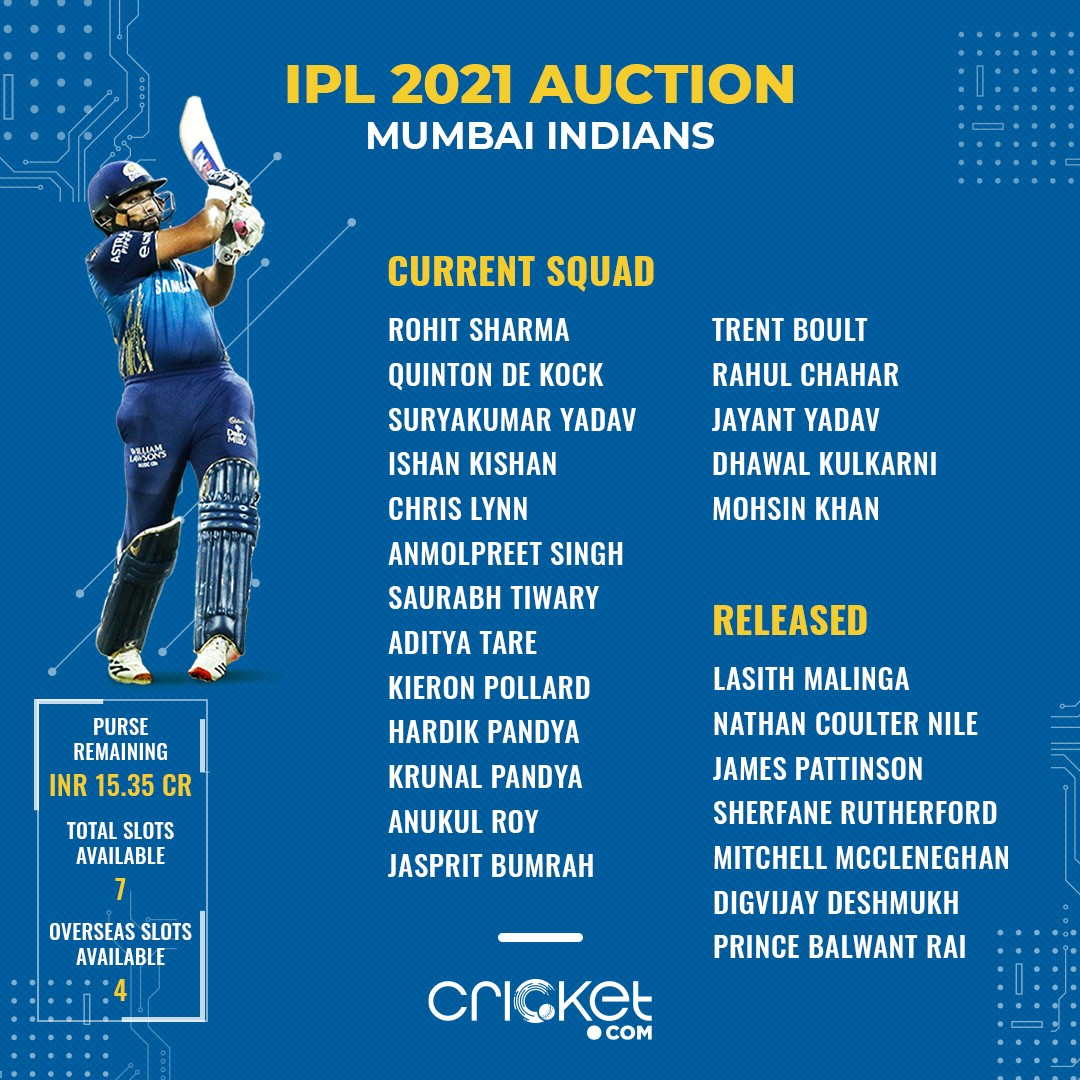 Mumbai like playing two overseas fast bowlers. They have the best Indian recruit in the department in Jasprit Bumrah and since there has been a lack of quality Indian pacers in the domestic circuit, Mumbai have always relied on two overseas pacers to support Bumrah. Since 2018, the last time teams were reset, Mumbai have bowled 316.1 overs with overseas pacers, second only to Delhi Capitals’ 407.5 overs. Two overseas pacers will be their topmost priority heading into the auction.

Dissecting the kind of bowlers Mumbai like to play, they would want someone with pace, bounce and preferably with some power-hitting skills. Kyle Jamieson and Chris Morris fall perfectly in that criteria. Their demand in the auction will determine how fiercely Mumbai go after them but it is expected that they will put their foot down for at least one of them. It won’t be a surprise if they acquire Coulter-Nile’s services again at a much cheaper price than what they paid in the last auction - INR 8 crore.

Mumbai have also relished left-arm seamers which puts David Willey and Jason Behrendroff into contention. Jhye Richardson, the highest wicket-taker in the recently concluded 2020/21 Big Bash season, will be a hot property in this auction and Mumbai will have their eyes on him. Mark Wood is another candidate.

In other options, they have Liam Plunkett and Tom Curran. However, both of them rely on variations which has not been Mumbai’s forte for quite some time.

The call to move the 2020 edition of IPL was not expected to suit Mumbai given they were a touch light in the spin department. Although, the pitches were not as sluggish as anticipated, allowing Mumbai to keep their spinners in a supporting cast.

Mumbai does not have the worst of spin attacks but there are sharper spin units in the competition. Krunal Pandya is a restrictive spinner who at times bowls like a medium-pacer with a shorter run-up and Rahul Chahar, though vouches great potential, was slightly off the radar last season. 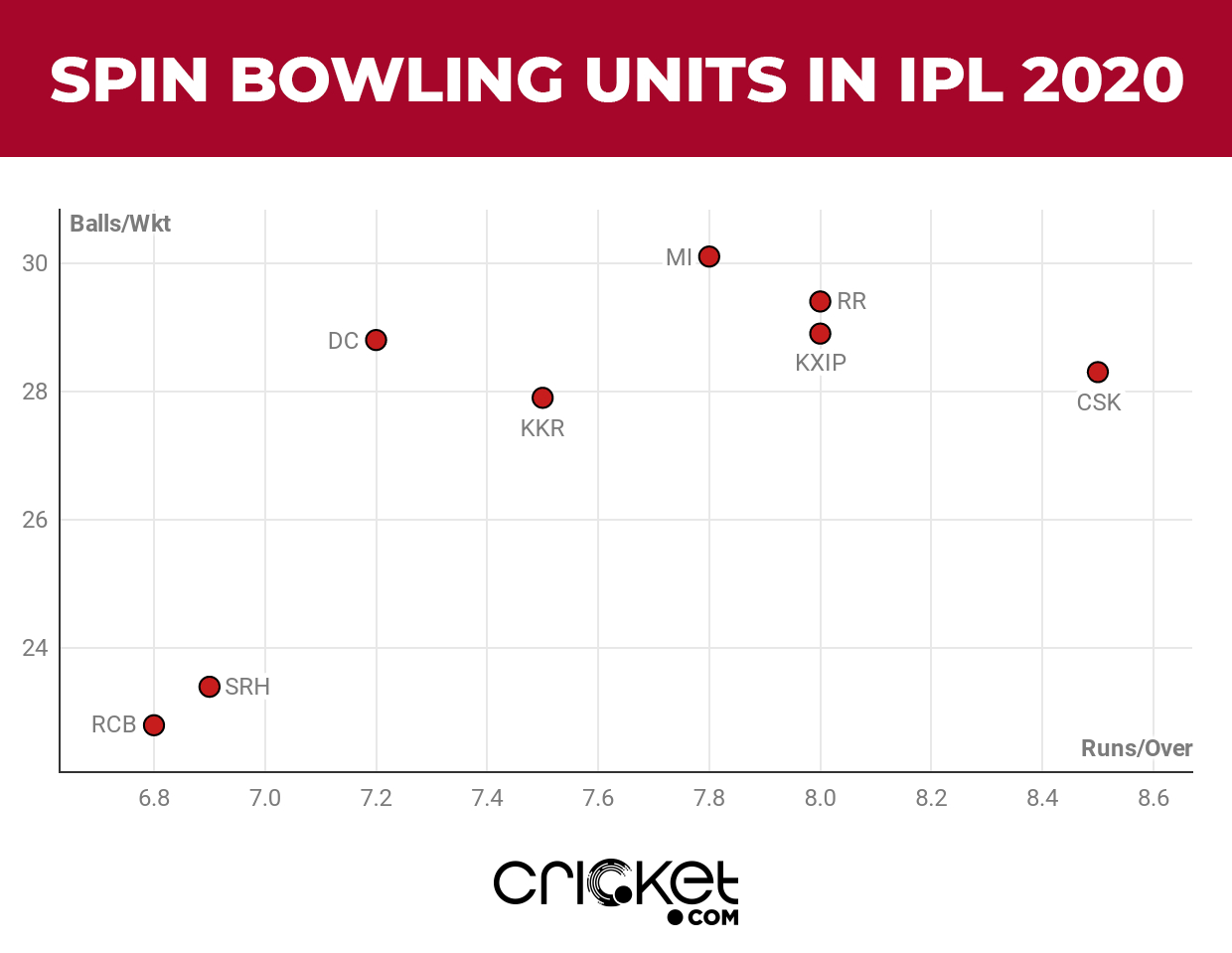 With a year left for the full auction and with both funds and spots available, Mumbai may want to plug the only hole in their arsenal.

Mumbai can go for both Indian and overseas spin options. Amongst the Indians, they have the option to go back to Harbhajan Singh who has done exceptionally well for them in the past. Though, there are teams who may aspire Harbhajan’s skillset more than Mumbai and a bidding war may see Mumbai stay away from Harbhajan in the end. Krishnappa Gowtham is another candidate.

Amongst the overseas options, they can go after Mujeeb Ur Rahman or Sandeep Lamichhane. Mumbai can also ponder picking Moeen Ali which will provide them not only a spinner but a quality back-up all-rounder. All these names should be in demand and Mumbai’s limited purse of INR 15 crore will make it interesting to see which players they get their hands on.

A formidable batting unit, Mumbai may want to invest in an experienced middle-order back-up option, in case they suffer multiple injuries on that front and will prefer an Indian cricketer for that role. But this will be last on their criteria list, heading into the auction.

Gurkeerat Singh Mann, Kedar Jadhav and Karun Nair are amongst a handful of options in the Indian contingent if they go for experience. They can also afford an overseas pick, however, it may compromise their balance if the acquired player has to be put into the XI - a big reason why Rutherford spent the entire 2020 season on the bench. In that lot, they have options in Rutherford himself, Ravi Bopara, Colin Ingram and Sam Billings. Not to forget, the slot will be filled automatically if they snaffle Moeen Ali which gives them the added motivation to go hard for him. 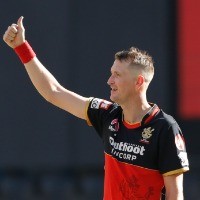 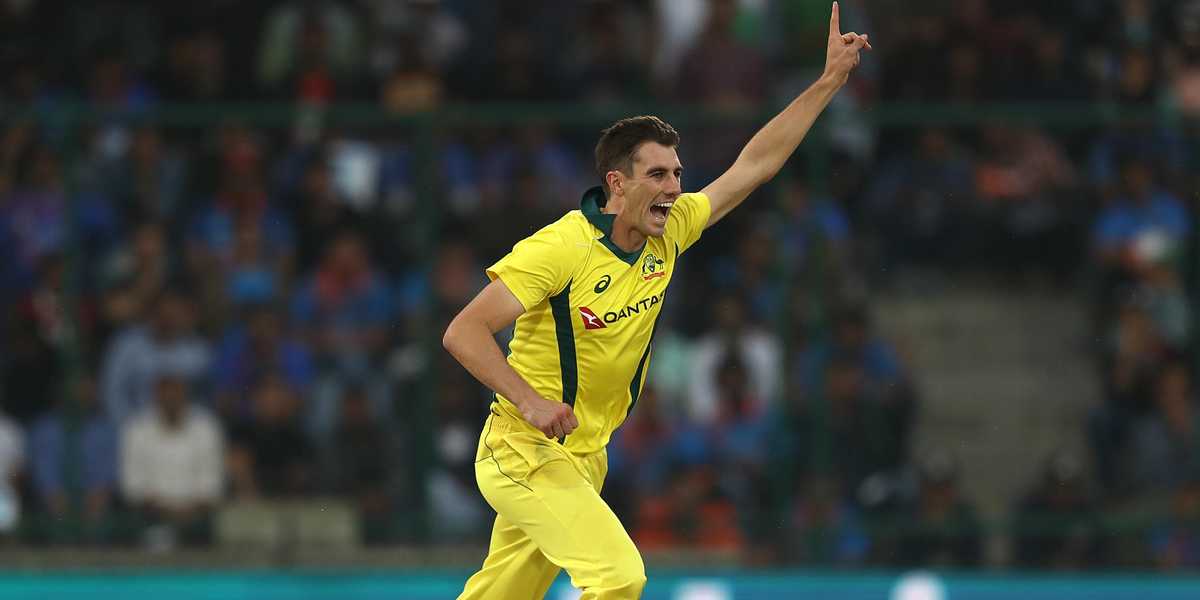