Nathan ‘GOAT’ Lyon - a legend in his own right 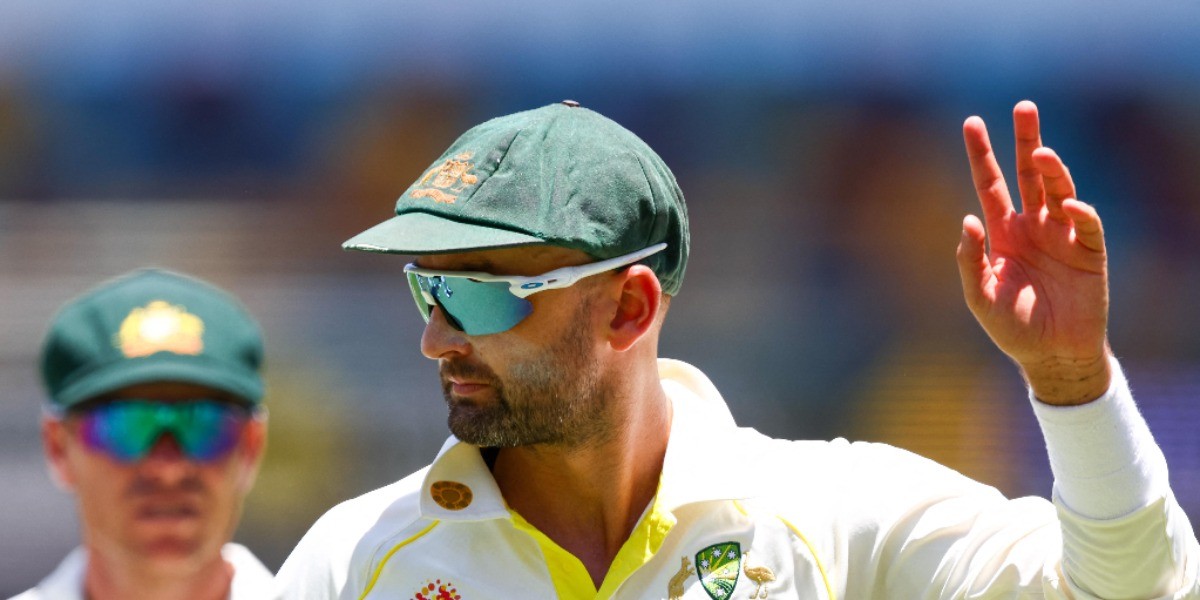 Nathan ‘GOAT’ Lyon - a legend in his own right

The latest to join the 400-club, Lyon’s career deserves to be celebrated

On Saturday, Nathan Lyon became the third ever Australian bowler, and the seventeenth overall, to claim 400 wickets in Test cricket. He had to wait 326 days to tick-off the milestone, largely due to Australia’s messed up scheduling and partly due to his own form concerns, but once he did so, the ‘GOAT’ picked three more wickets in quick succession to help Australia to a famous victory at the Gabba.

It was the 53rd time in his career that Lyon had starred in a Test victory, and he has now picked 228 wickets in victories alone, at quite an impressive average of 26.62.

The presence of a certain Ravichandran Ashwin in the same generation means that Lyon’s achievements have constantly been belittled, but you simply don’t play over 100 Tests and take 400 wickets without being world-class. Not in Australia, at least.

In wake of Lyon officially joining the 400-club after a long wait, we look at why ‘Gazza’ needs to be recognized as one of the best ever to have set foot on the field and why it’s high time we put some respect on his name.

The saviour who emerged out of nowhere

As of this very moment, Nathan Lyon has played 101 Test matches and has taken a total of 403 wickets. Even without taking into consideration the excellent average and strike rate he possesses, this is quite a remarkable achievement.

But what’s often overlooked is the circumstances under which Lyon debuted, and how he essentially was a saviour who emerged out of nowhere. Because for years leading into his debut, the art of spin bowling in Australia was dead.

Shane Warne hung up his boots in January 2007, and for the next four years, Australia tried everything to find a competent replacement. They picked the most successful Shield bowlers, recalled veterans and used batters as specialist spinners just because they bowled leg-spin. They were desperate to fill the void left by Warne.

Yet until late 2011, nothing worked. Absolutely nothing.

Nathan Hauritz, Jason Krejza, Michael Beer, Bryce McGain, Steven Smith, Brad Hogg and Xavier Doherty were all among the names Australia tried in Tests during this period, but nearly every single move bombed. The most successful bowler from this lot was Hauritz, but even he took his wickets at 36.22 apiece. 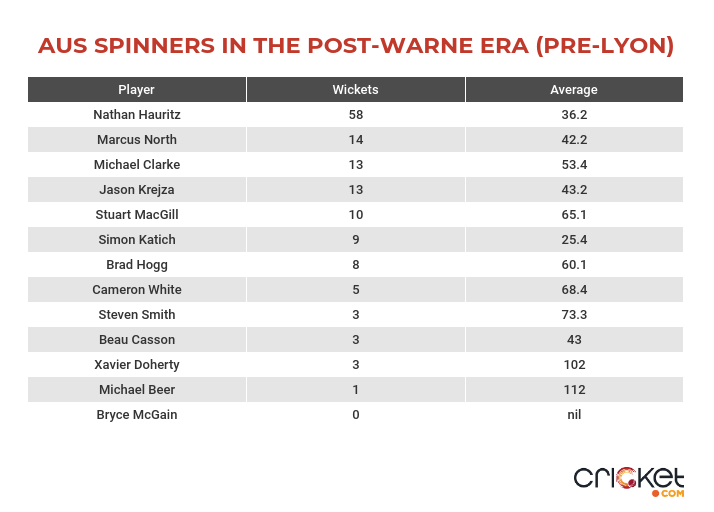 Overall, from after Warne’s retirement till Lyon’s debut, Australian spinners took 140 wickets in 132 innings at an average of 46.90, Economy of 3.41 and Strike Rate of 82.5. Shocking numbers to say the least.

It was only then in late 2011, right before the tour of Sri Lanka, that the Aussies plucked Lyon out of nowhere. And he instantly outdid all his predecessors: Lyon kick-started his Test career with a five-for, and then picked 23 wickets @ 27.47 apiece in his first full year with the Test side.

Inside his first 10 matches, he starred in wins against Sri Lanka, South Africa and India, and for the first time in nearly half a decade, Australia had found a spinner that was consistent and provided stability. The early impression he made was good enough for the selectors to stick with him and the rest, as they say, is history.

A decade on, Lyon now has over 400 scalps to his name, but his contribution to Australian cricket cannot be just quantified in numbers, for he essentially rescued a sinking ship.

Triumphing against all odds

Lyon’s bowling average of 32.07 is pretty good, but in general, people tend to dismiss his achievements due to it being on the higher side, at least in comparison to the other greats. His fiercest rival Ashwin, for instance, averages only 24.12, while the likes of Murali, Warne and Kumble averaged 22, 25 and 29 respectively.

Now, that 32 is a bit on the higher side cannot be denied. But what’s worth mentioning, and often gets overlooked, is that Lyon has managed to maintain these numbers while playing 52% of his games in Australia, a country that is statistically a graveyard for spinners.

Since the turn of this century, 11 countries have seen 1000 or more overs of spin being bowled in them. And in that, no country is less spin-friendly than Australia, where spinners have averaged an eye-watering 42.76. 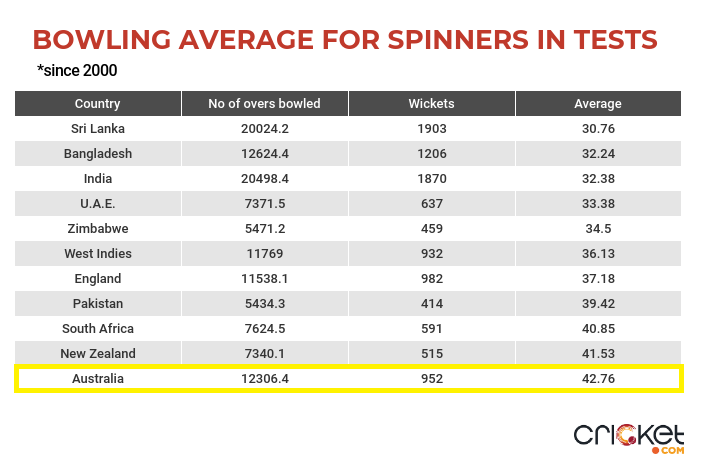 Yet despite the evident graveyard that Australia is for spinners, Lyon has found a way to take wickets and be successful.

To put these numbers into context, since Lyon’s Test debut in 2011, all the other spinners who have played in Australia have taken 183 wickets at an average of 61.91.

In essence, Lyon, in a place where it’s a curse to be a spin bowler, has been almost twice as good as all the other spinners who have set foot in the country.

Transcending conditions with the ball in hand

The hallmark of any great cricketer is being able to adapt. To adjust your game in such a way that you’re versatile enough to succeed anywhere in the world, regardless of conditions.

Overall, outside Australia, Lyon averages 31.26, but at his peak, he starred with the ball in almost every country he traveled. 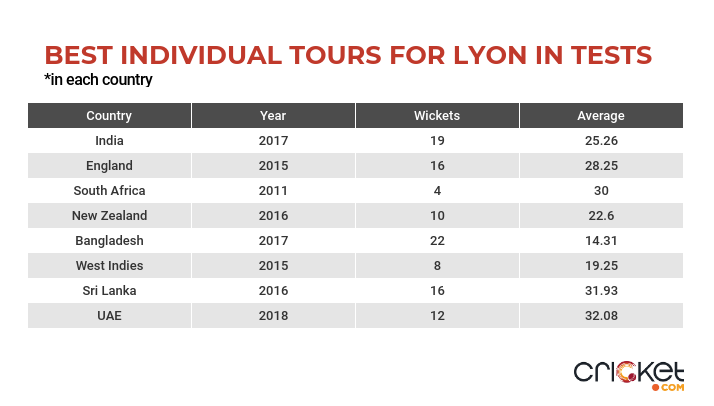 Lyon has been a part of winning sides in South Africa, New Zealand, Sri Lanka and West Indies, while he’s registered hall-of-fame worthy performances in both India and Bangladesh.

His ‘worst’ country has been the UAE, the only place where he averages over 50, but even there, three years ago, he finished as the second-highest wicket-taker in the series and did everything he could to try and help Australia register a famous series win. That wasn’t to be, but by the end of the series he’d earned everyone’s respect, having conquered a place where in 2014 he endured a nightmare, taking 3 wickets at 140.66 apiece.

Everywhere he’s played, Lyon has had at least one series where he’s been a difference-maker. You don’t do that unless you’re world-class.

For all the complaints about Lyon’s numbers being apparently ‘underwhelming’, one aspect which is constantly overlooked is just how often he strikes. When it comes to how frequently he takes wickets, Lyon is up there with the best ever to have graced the sport.

Among spinners who have taken 300 or more Test wickets, Lyon’s SR of 64.4 is the fifth best, better than the likes of Anil Kumble and Harbhajan Singh. It is worth noting that among those who are above him in the list, Warne is the only bowler who has played in identical conditions. 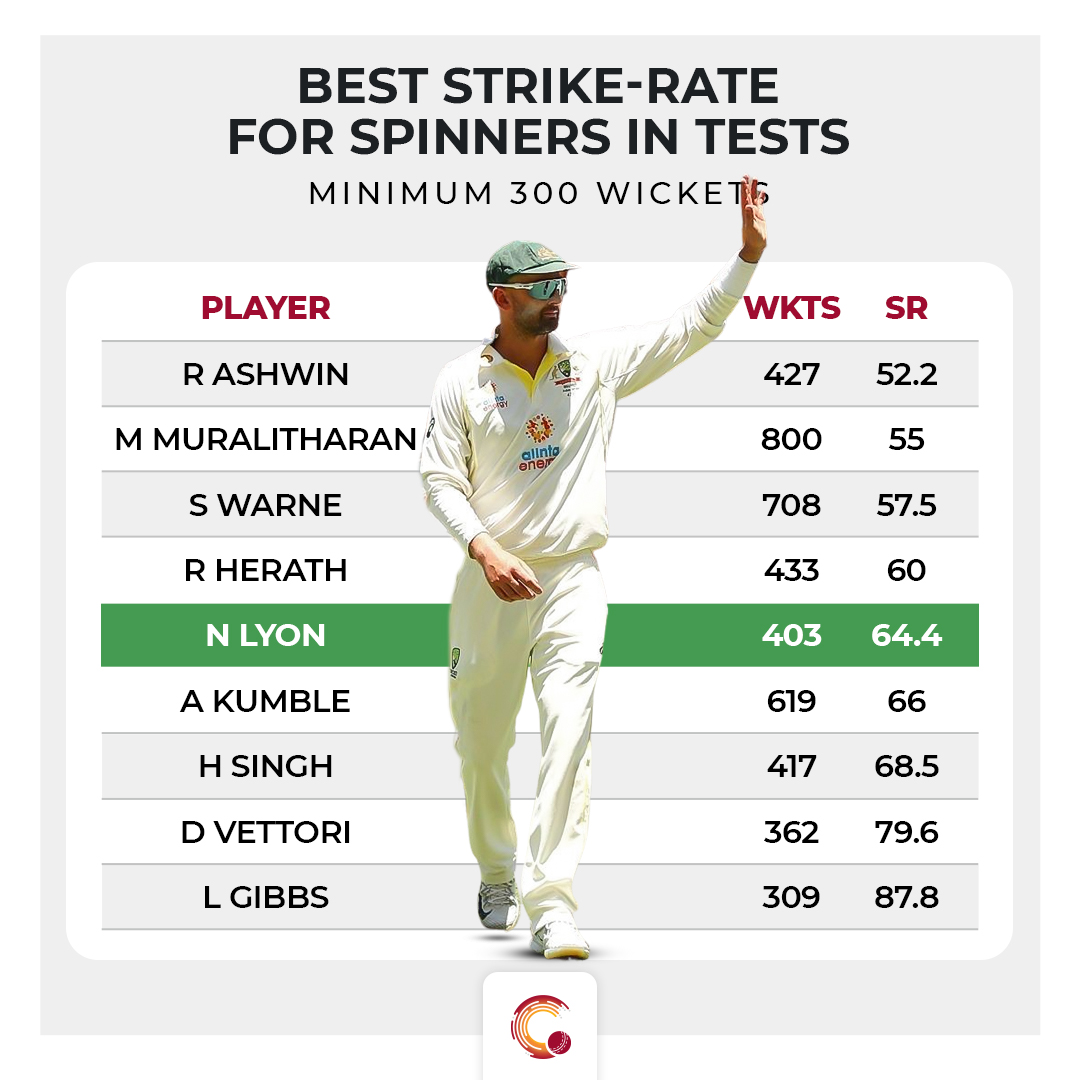 For Lyon to have a sub-65 strike rate having played more than half his career on Australian wickets is outrageous.

A legend in his own right

He might be ironically referred to as the GOAT (Greatest of All Time), but Lyon’s achievements make it clear that he has the claim to be referred to as one of the greatest of all time. Specific to Australian cricket, at the very least.

It really doesn’t matter if he has a second-wind and goes on to breach the 500/600 wicket mark, or if he stalls right here and ends his career with 400-ish wickets. ‘Gazza’ has already sealed his legacy and his achievements will certainly stand the test of time.

10 years ago, Nathan Lyon was the accidental spinner who saved Australian cricket. The Kangaroos can consider themselves blessed if they manage to find a successor who is anywhere near as good as him.