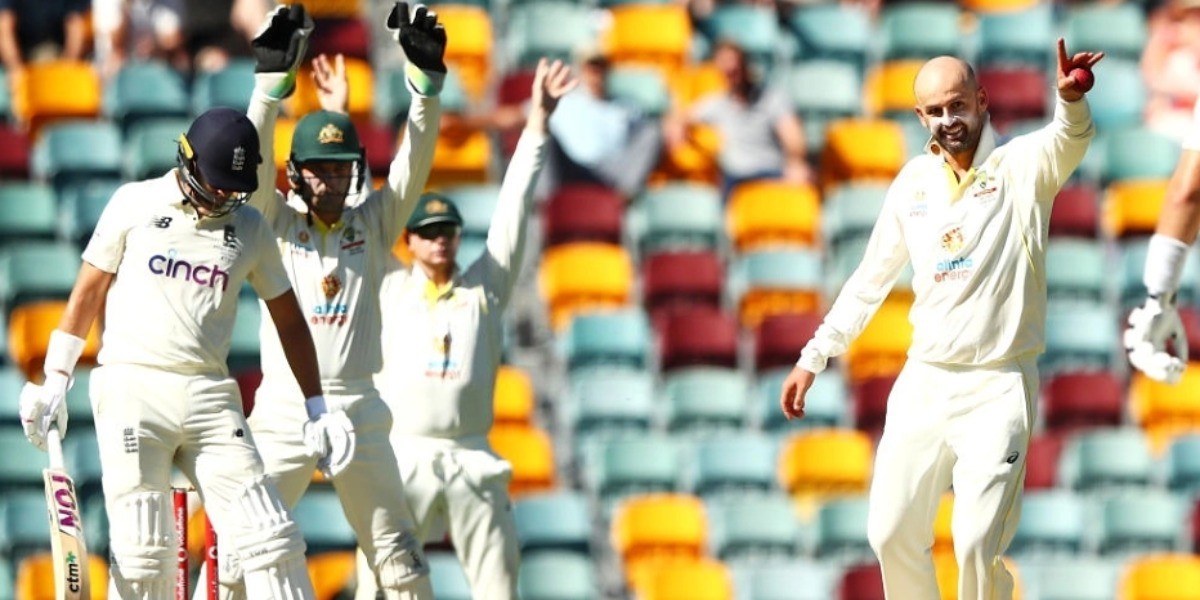 In one of the fiercest rivalries in Test cricket, Dawid Malan and Joe Root walked out to take centre stage on the fourth day of the first Ashes Test at the Gabba. After a dismal performance with the bat in the first innings, the duo showcased tremendous grit and determination to defy the odds and take the visiting side to 220 for the loss of the openers at the end of a riveting third day of Test cricket with an unbeaten 159-run stand for the third wicket.

While England harbored hopes of a turnaround courtesy of their scintillating partnership, Australia bounced back in a commanding fashion in the morning session to scalp eight wickets for 77 runs to dismantle the opposition.

Nathan Lyon kickstarted the proceedings for the home team with the prized wicket of Malan to dent England early with a classical off-spinner.s dismissal, caught at silly point for a well compiled 82 .

A couple of overs later, Cameron Green induced a faint edge off Root for 89 to crush the hopes of the England fans waiting to witness their skipper notch up his first hundred on Australian soil.

With two set batters back in the pavilion, Lyon wreaked through the middle-order of the side to pick up four wickets and help Australia bundle the opposition for 297 runs. The 34-year old was well supported by Pat Cummins, who picked up the wicket of Ben Stokes to shut the door of an England comeback in this game.

Batting woes in the morning session resulted in the visiting side gaining a slender lead of 19 runs. With David Warner nursing a bruised rib, Alex Carey and Marcus Harris walked out to open the innings in pursuit of 20 runs. While Carey was dismissed for nine, Harris and Labuschagne ensured Australia record a thumping nine-wicket win and lead the five-match series. Here are some of the notable stats from the fourth day of the Test match.

One of the mainstays in the bowling unit of the Aussie outfit, Lyon etched his name in the record books to become the third Australian bowler to pick 400 wickets in the longest format of the game. 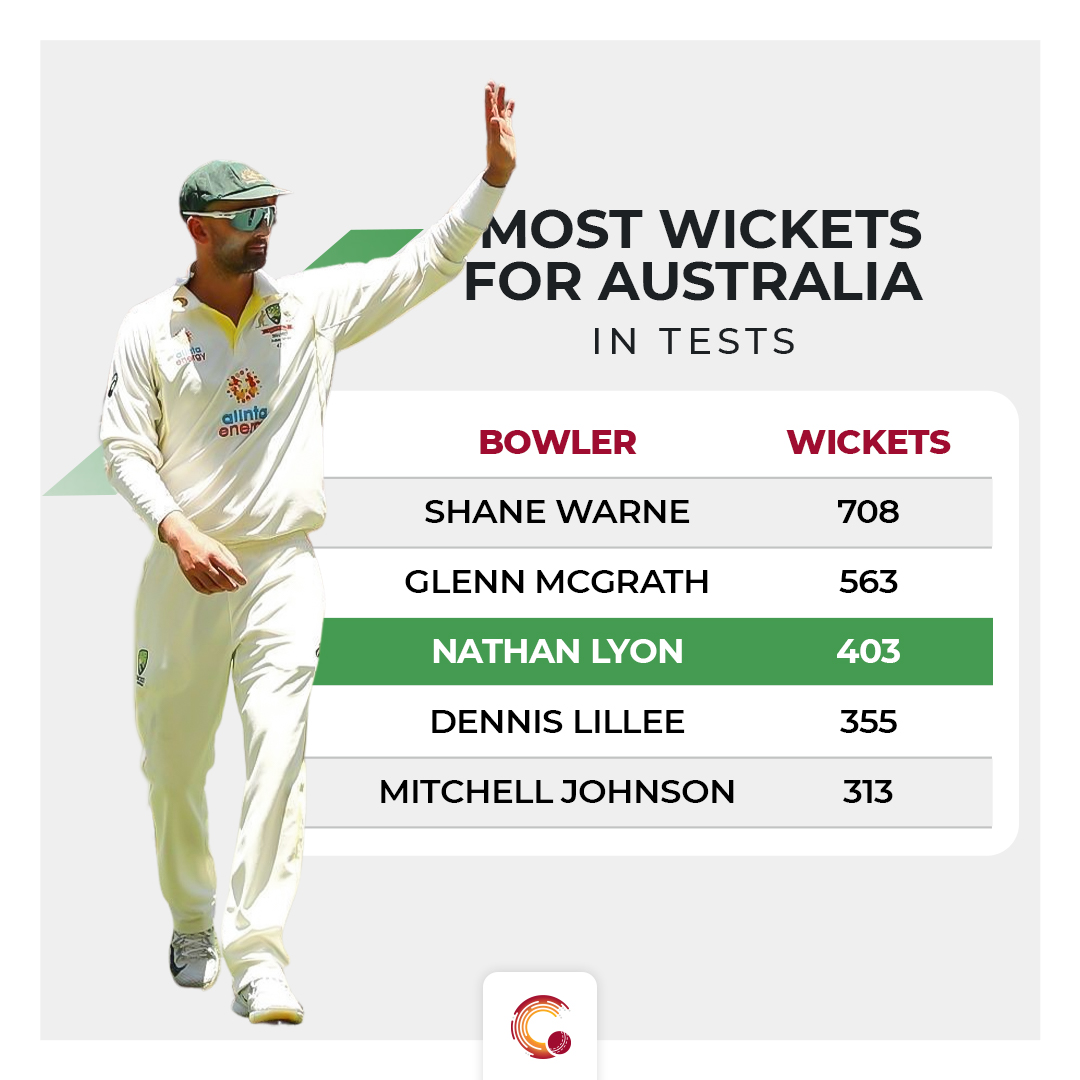 While Lyon waited for a long time and had to toil hard for his 400th scalp, he finally achieved this milestone with a vital wicket of Malan to break the 162-run stand. He joins an elite group of Australian bowlers to accomplish this feat, with Shane Warne and Glenn McGrath accounting for 708 and 563 wickets, respectively.

Cummins leads from the front

After a turbulent week prior to the commencement of the first game, Cummins was handed the reins of the side along with Steve Smith as his deputy. The 28-year old accounted for a perfect start to his captaincy debut as he scalped his first five-wicket haul against England to bundle out the opposition for 147 runs in the first innings. 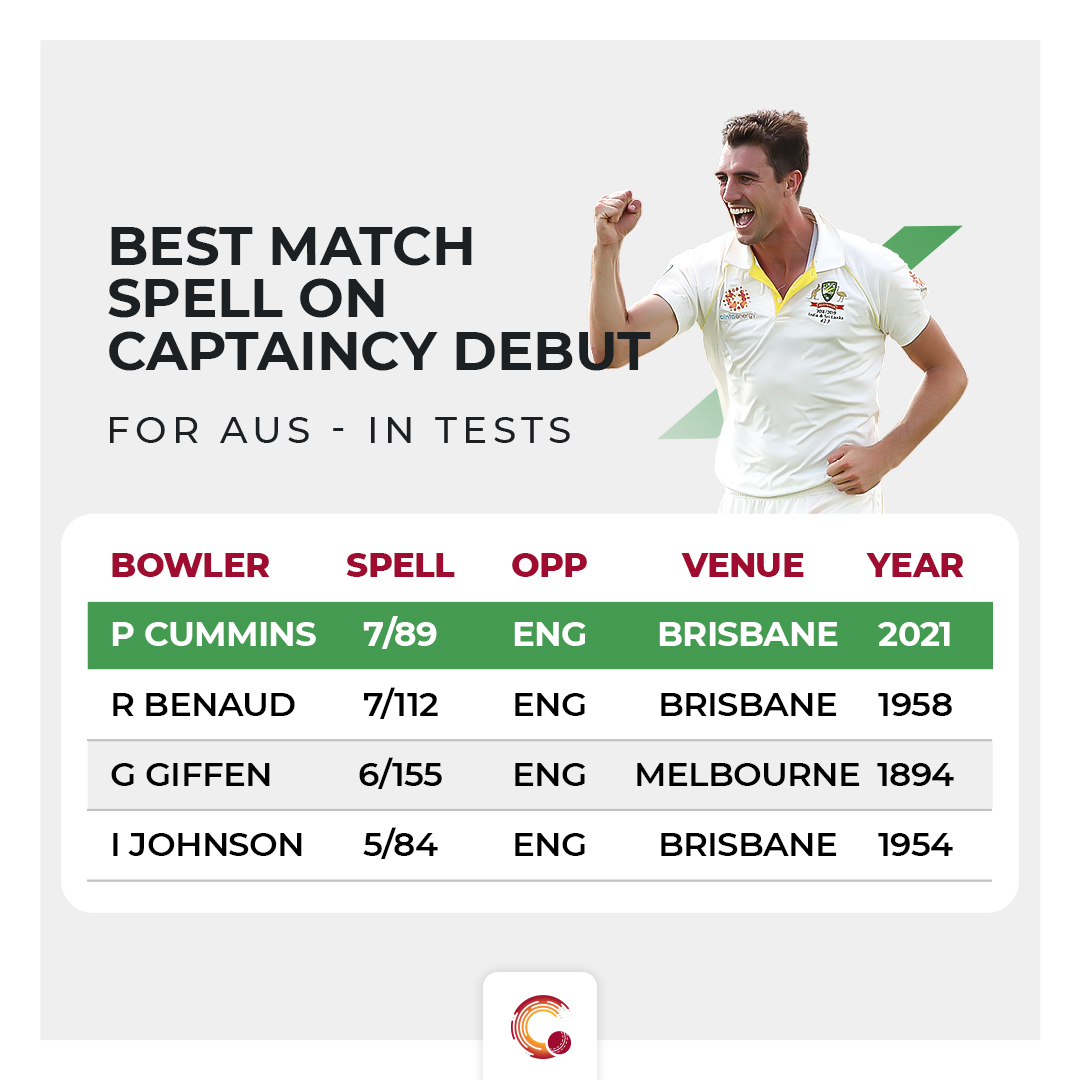 The right-arm pacer followed this lethal performance with the ball to return with two wickets in the second innings and end the game with figures of seven wickets for 89 runs. His exploits with the ball across two innings ensured he registered the best figures by an Australian bowler on his captaincy debut. Interestingly, Richie Benaud held this record with figures of seven wickets for 112 runs against England at the same venue.

While all the focus and attention has been on the performance of the bowling unit of the home team and the record-breaking performance by Travis Head in the first innings, Carey diligently went about his business in the first Test. 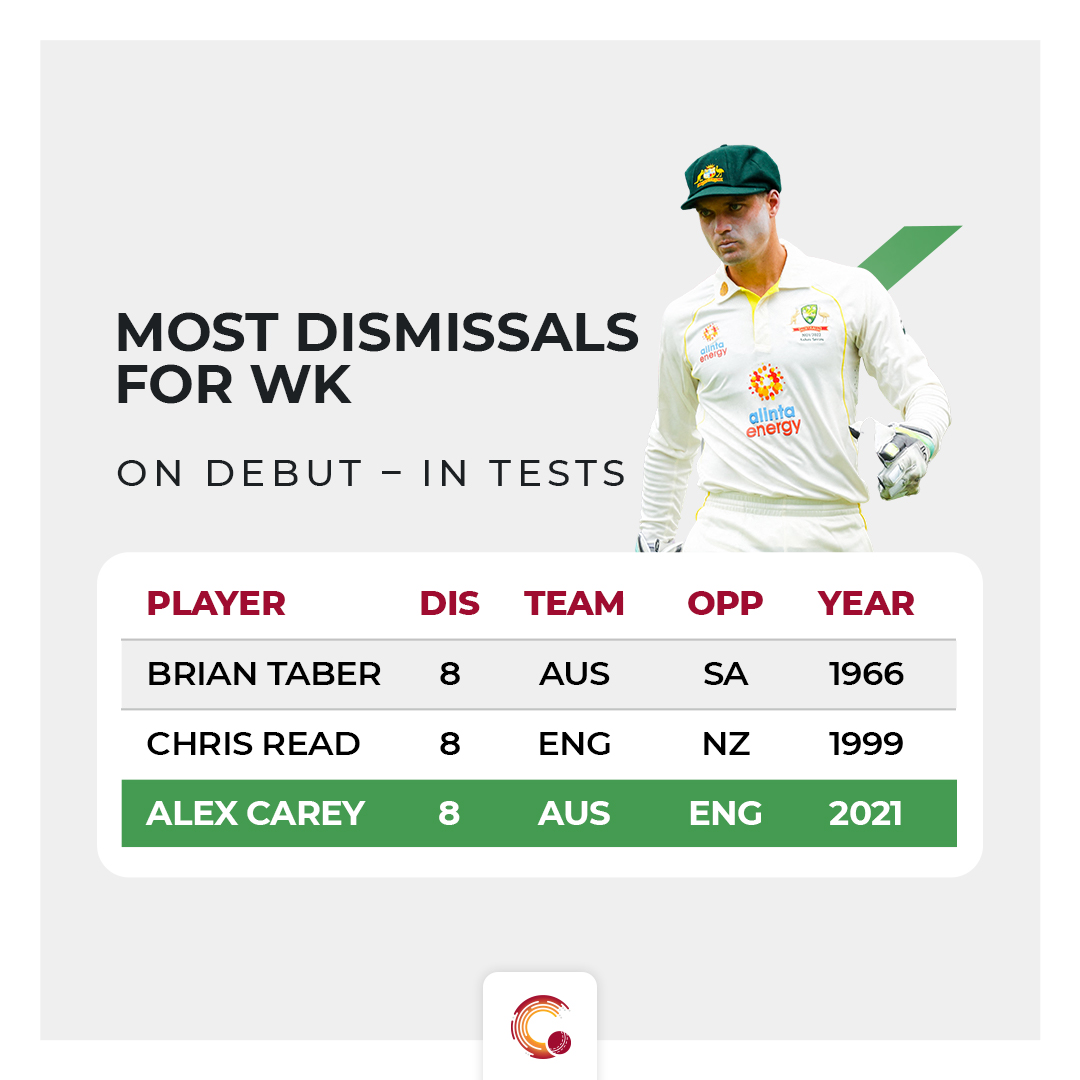 With three catches in the first innings and five in the second, the wicket-keeper batter accounted for eight dismissals in his maiden Test, which is the joint-highest by a keeper on debut. Brian Taber for the Aussie side and Chris Read, plying his trade for England, are the other two players with eight dismissals in 1996 and 1999, respectively.

After a below-par batting performance in the first innings, not many people gave England a chance to make a comeback in this match. Despite walking into their second innings with a deficit of 278 runs, England produced a valiant effort with the bat to score 297 runs and take a small lead.

While not much has gone their way this match, they can take solace from the fact that in this century, this is only the second instance out of 21 where a team has taken the lead after trailing by 250+ runs in the third innings against Australia on their home turf, with Australia batting second. In 2005 at the Sydney Cricket Ground, Pakistan crawled their way to cut off a deficit of 257 runs, which is the first instance.

A valiant effort by Malan and Root

After going down compressively in the game, the only positive for the Three Lions heading into the day and night fixture next week would be the partnership of Malan and Root in the second innings. The duo ensured England were unscathed in the final session of day three with assured footwork and forged a vital stand to lead their fightback. 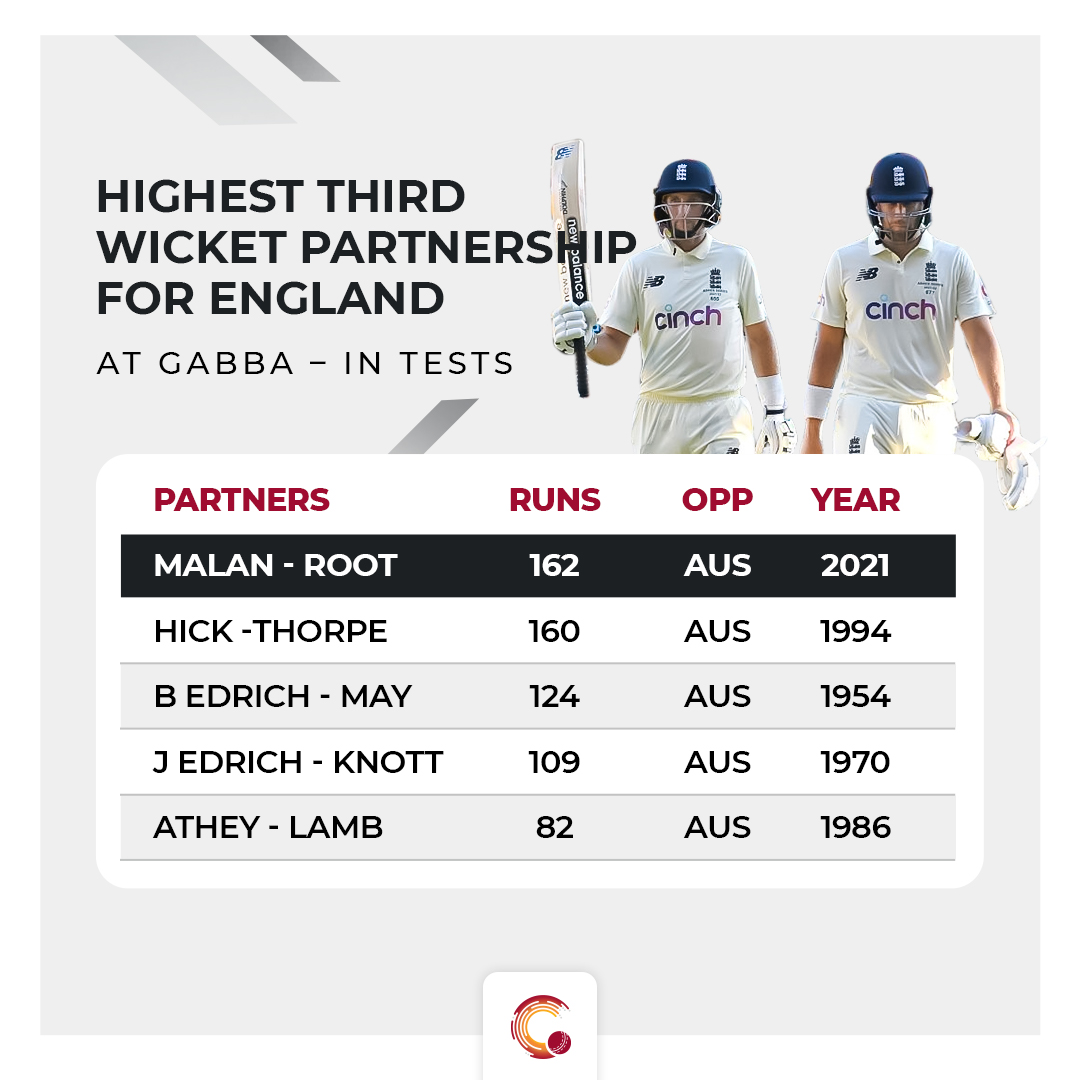 With the second new ball around the corner, the onus of the side relied heavily on them to take the team through the morning session. However, the southpaw was dismissed by Lyon, ending a record-breaking 162-run stand for the third wicket for England at the Gabba, surpassing the previous best of 160 in 1994 by Graeme Hick and Graham Thorpe.