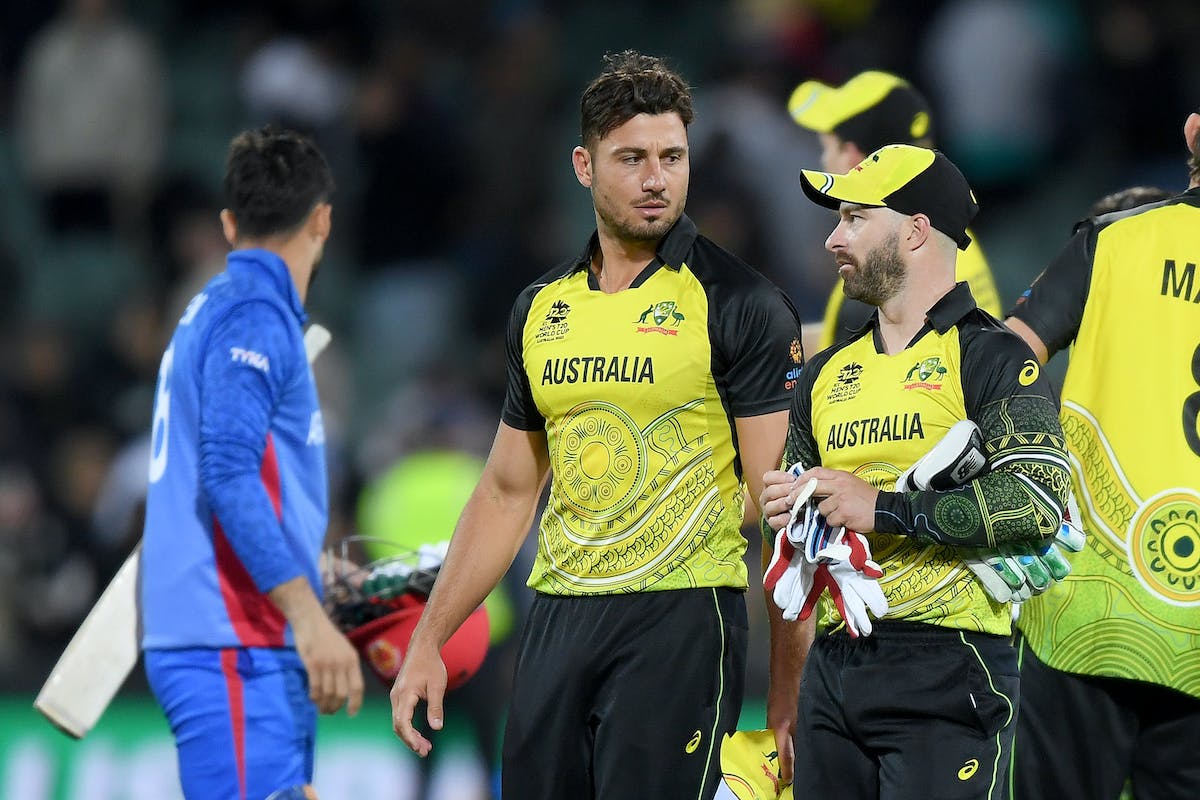 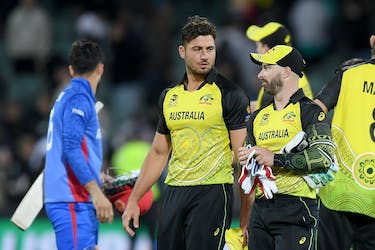 After setting Afghanistan a target of 169 at the Adelaide Oval, Australia had a decent start when they removed openers Usman Ghani and Rahmanullah Gurbaz with 40 in 5.3 overs.

Ibrahim Zadran (26 off 33) and Gulbadin Naib (39 off 23) turned the tables on the defending champions with a partnership of 59 in 45 balls. However, one over from Adam Zampa changed the equation completely as he Glenn Maxwell ran out Naib which was followed by Zadran sweeping a ball straight to Mitchell Marsh off the next ball and Najibullah Zadran hitting it straight to Maxwell two balls later.

Things got worse for Afghanistan when captain Mohammad Nabi holed out to David Warner in the next over by Josh Hazlewood. From 99/2 they were 103/6 in the space of nine balls.

However, Rashid Khan (48 not out off 23) never stopped believing as he smashed three boundaries and four sixes to put Australia on the cusp of elimination. Marcus Stoinis somehow managed to defend 22 runs off the final over as the hosts earned a win by four runs.

Stand-in captain Matthew Wade breathed a sigh of relief, as he felt Australia were never safe with Rashid in the middle as he had seen the legspinner pull off the unthinkable. Wade, probably, had flashes of Rashid's 12-ball 40 while chasing 170 against Chennai Super Kings in the IPL 2022 when they played together for Gujarat Titans.

"Knowing you have the allrounder to bowl one of the last two is a bit nerve-wracking but I've seen Rash do that plenty of times. Never really felt safe," Wade said in the post-match presentation.

With regular captain Aaron Finch out with a hamstring niggle, Wade had to decide on his death bowlers with Afghanistan very much in the game.

While the win was necessary, Australia still have a Net Run Rate of -0.173 which means, they have to depend on Sri Lanka to beat England on Saturday at the SCG to qualify for the semis.

"We'll stay here and watch that game, hoping for a bit of an upset. We put ourselves in that situation, been trying to chase a bit of run rate but it hasn't gone our way. Bit slow out of the blocks this tournament, hopefully it doesn't cost us," Wade said.

Finch and middle-order batter Tim David were both out of the match with niggles as Australia brought in Cameron Green and Steve Smith for the match, besides replacing Mitchell Starc with Kane Richardson. Wade said that David and Finch will play the semifinals if Australia qualify.

"Yeah, hopeful they'll be right to go if we make the semis," the wicketkeeper said.

Afghanistan captain Mohammad Nabi lamented his team's loss of match time which had costed them momentum. The Asian side lost their opening match to England which was followed by two wash-outs against New Zealand and Ireland. Their loss against Sri Lanka virtually knocked them out of the tournament.

"We started well in the powerplay and the middle, but threw away four wickets back to back and that put us under pressure. Tough when you play first game and then don't play for 10 days. We didn't get that momentum but improved every game from there," Nabi said.