The last South African team that landed on the Indian shore to play a bilateral series was studded with star players like AB Devilliers, Hashim Amla and Faf du Plessis to name a few. It is not a surprise that a team with giants such as these was able to beat India in its own den in both facets of the white-ball game.

Four years later, the scenario for South Africa has changed. The stars have retired and their captain Faf du Plessis is rested for the T20Is. Of the 14 men selected in the squad, only three – the stand-in captain Quinton de Kock, David Miller and Kagiso Rabada have a reasonable experience (more than 10 T20 games) of playing in India before.

While beating India in its own backyard has been one of the toughest missions in recent history, for South Africa they have inexperience to cope with in addition to outdoing the opposition with talent.

However, a deeper analysis of the men for the job in the South African team provides some encouraging signs for the visitors.

For a player, the preparation for a series in the subcontinent involves preparing against the slow turning ball and for the management, it involves picking players that are adept against such bowling.

In the South Africa squad for T20Is, as many as three top-order batsmen average more against spin than pace. Although these players – opener Reeza Hendricks, Rassie van der Dussen and Temba Bavuma – have limited exposure to spin in the subcontinent dustbowls (less than five T20s in Asia), their numbers against spin will provide some encouragement to the visitors.

Nevertheless, all good things come at a price. The price paid by the spin specialist South African batsman is the rate at which they score their runs. Of the three batsmen with a better average against spin, only Bavuma has a better strike rate. For Dussen and Hendricks, the strike-rate against spin falls below 120 that is by no means spectacular in the modern-day T20 game.

For the South African batting unit, the strategy would be to go hard against the pacers up-front and then utilize the ability of Dussen and Bavuma in the middle-overs against spin to keep wickets in hand for a death overs onslaught.

While a trial by spin awaits South Africa, the choice of spinners from India will provide some relief to their batsmen. In an era earmarked by the dominance of wrist and mystery spinners, India has continued to show faith in the off-spin of Washington Sundar and the left-arm orthodox spin of Krunal Pandya and Ravindra Jadeja. Rahul Chahar is the lone option that provides some mystery with his leg-breaks.

It is rather surprising that two of the top-5 wicket-takers in T20I cricket since the 2016 World Cup – Yuzvendra Chahal (second – 46 wickets) and Kuldeep Yadav (fifth – 35 wickets) do not find a place in T20 scheme of things for India. Although the management has provided no reason for their continued exile, it can be articulated to factors such as a rotation policy and their ability with the bat and in the field.

Surprisingly, the South African trio of left-arm spinners – Tabraiz Shamsi, Bjorn Fortuin and Jon-Jon Smuts are as good as the Indian quartet on paper. Another statistic that will provide some encouragement to the South African prospects. 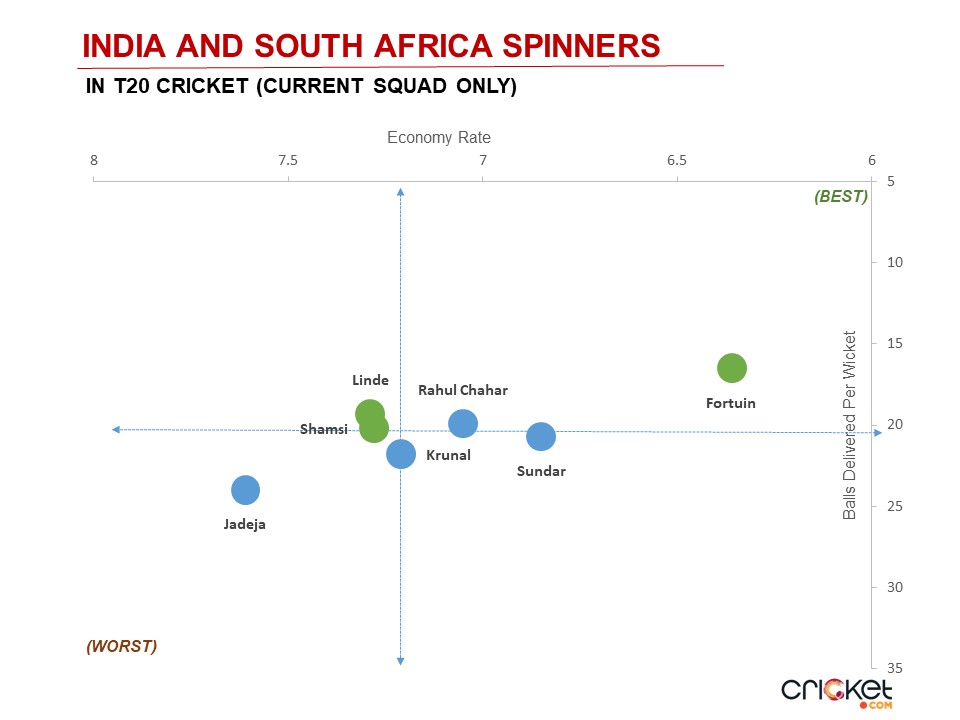 Inexperience at both ends

While there is some experience in the spin bowling department for India, each one of the pace bowling trio can at best be termed as a Rookie. While Khaleel Ahmed has an experience of 11 T20Is, Navdeep Saini has played three and Deepak Chahar has played only two T20Is. Saini was impressive in the series against West Indies in which he picked five wickets in three games at an economy of 7.09. Deepak Chahar stunned the boys from the Caribbean with a spell of three wickets for four runs in the third T20I. The most experienced of the lot, Khaleel Ahmed has struggled with consistency as he has picked up only 11 international wickets so far with an expensive economy rate of 8.8.

It is worthwhile to test all these bowlers after an impressive show in the West Indies but come the T20I World Cup in 2020, it is almost certain that the experienced heads in Jasprit Bumrah and Bhuvenshwar Kumar will be back in the reckoning.

For this series, pragmatic batting from senior South Africa batsmen in de Kock and Miller can test the inexperienced Indian bowling line-up.

For India, the inexperience in the bowling department is made up by the Indian batting line-up that includes the modern-day greats in Virat Kohli and Rohit Sharma.
Manish Pandey, a regular now in the T20I scheme of things, is more likely to pip Shreyas Iyer in the XI while Rishabh Pant is expected to continue his vigil at four for the time being. A return of Hardik Pandya adds firepower at the death overs of the innings. The question of Shikhar Dhawan vs. KL Rahul at the top of the order is still under consideration. Dhawan’s failure in the Caribbean has raised more doubts about his T20I future.

Similar to most tracks in India, the one in Dharamshala is conducive to spin bowling. In the eight T20Is played at the venue, spinners have taken 28 wickets at 21.3 apiece as compared to 38 wickets by pacers at 28.1 runs per wicket. With rain on the cards, the toss might see both captains to look to bowl first.

A win that saw South Africa chase down 200 against India when the two teams played a T20I here in 2015 could have been a confidence booster for them but given that none of the top five batsmen who chased down the target then are part of the squad now, the history is irrelevant here.

South Africa will hope that the experienced IPL regulars in de Kock and Miller fill the star-shaped void and their pace spearhead, Rabada, can capitalize with his experience and create a difference.