New Zealand has a well-rounded squad with, however, a few shortcomings

Playing without any superstars but consistently punching above their weight has been the hallmark of New Zealand cricket – a trait that makes the Black Caps everyone’s second favorite team.

The Kiwis have a solid track record in World Cups without, however, getting their hands on the trophy. They have played seven semi-finals in the 11 editions so far, the most by any side. However, they have also lost the most semifinals, losing six and winning only once, in 2015.

Despite Brendon McCullum’s retirement towards the end of 2015, the runners-up of the previous edition continue to remain a formidable side in world cricket thanks in large part to Kane Williamson’s calming presence, both as leader and as batsman. A win percentage of 56.5 since the previous World Cup speaks for itself, but the Kiwis’ away record is a cause for worry. 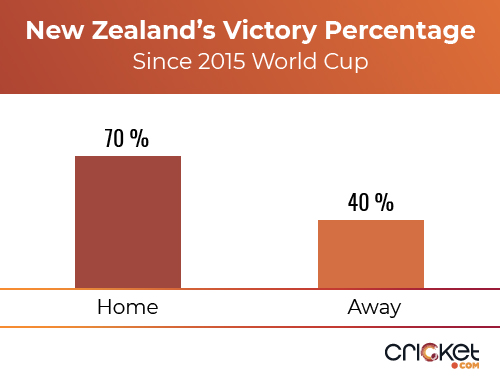 Most notably, in the eight games they have played in England since 2015, New Zealand has won only twice while losing five.

In terms of personnel, the Kiwis might not have players who carry the aura of superstars, but they have a number of experienced players capable of guiding their fortunes, most notably the batting duo of Kane Williamson and Ross Taylor.

Not only have Williamson and Taylor been the most prolific run-scorers for New Zealand, they love batting in England. Williamson has an average of 62.7 in England, his highest in all countries where he has scored over 500 ODI runs, while Taylor has a hefty average of 46.

This is both a plus and a minus, as the chart below shows: the Kiwis are overly dependent on those two when they play in England. 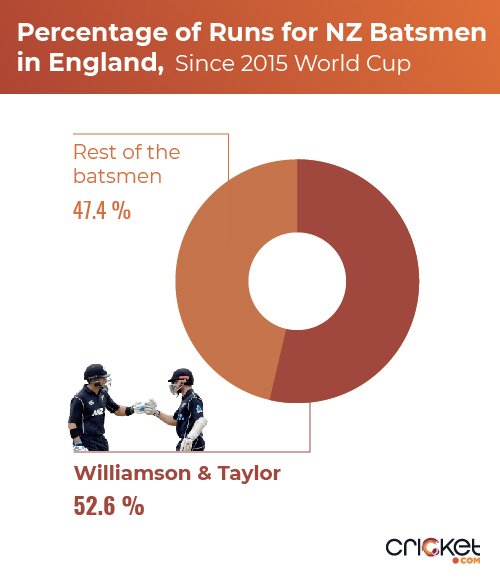 Ross Taylor, who will be playing his fourth World Cup, has found the mojo he misplaced during a mediocre 2016 where he averaged only 33 with the bat. He went through eye surgery and whatever it was the surgeon did, it seems to have worked a treat – Taylor has been in breathtaking form since then to the point where he is the best in ODI cricket excepting only Virat Kohli. 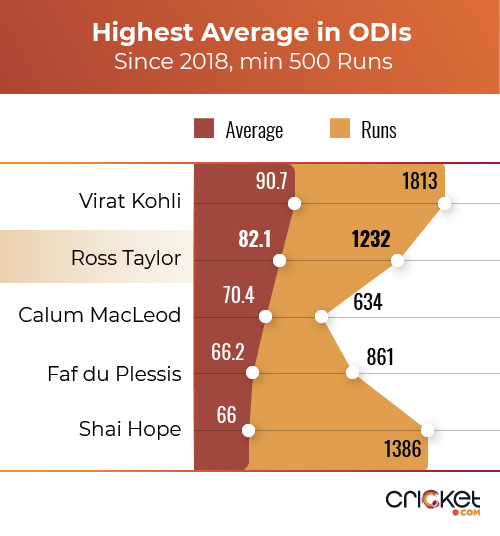 With the ball, New Zealand has the services of Trent Boult. The left-arm seamer was joint-leading wicket-taker in the 2015 World Cup, and hasn’t looked back since. His ability to strike with the new ball makes him a priceless asset for the Kiwis.

While Trent Boult has emerged as a genuine wicket-taker for New Zealand, the more experienced Tim Southee appears to have lost his touch. The right-arm pacer, who was once a potent bowling partner for Boult, is now rarely trusted with his full quota, having bowled ten overs in an innings only seven times in the last 20 ODIs he has played. 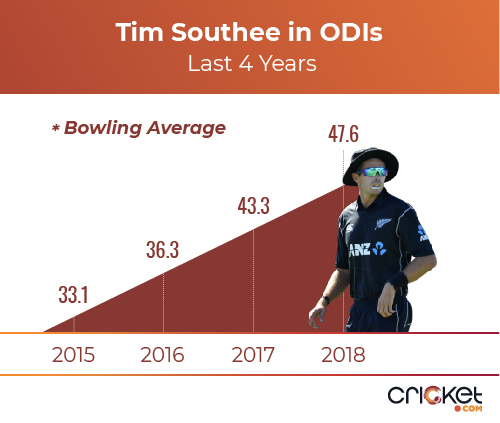 One silver lining exists: In the four games he has played this year, Southee has taken wickets at a much better average - 26.8, although his economy has suffered (6.9).

Another blemish in New Zealand’s armor is the lack of power-hitters in an otherwise reliable batting line-up. Taylor, Williamson and Latham comprise the core of the middle-order; their average is more than decent, but their strike-rate falls short of optimum in a format where, increasingly, scores of 350 are being seen as just about par. 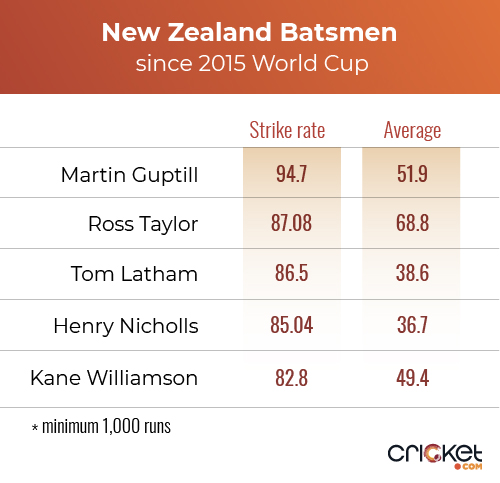 As seen above, only one of their batsmen to have scored over 1,000 runs since the last World Cup has a strike-rate in excess of 90 – and none of their top players strike at even 100. Compare that with England who have seven batsmen striking at 90 and above; South Africa and India who have four each; and Australia and Sri Lanka who have three apiece. Among the prominent sides, the West Indies is the only other team to have just one batsman striking at 90-plus, but that is mostly down to an unsettled batting line-up, which is only just beginning to be allowed to settle in.

New Zealand’s best hope is that James Neesham can do for them what a Hardik Pandya does for India. In the handful of ODIs the all-rounder has played this year, he has struck 204 runs at an astonishing strike-rate of 182. If he comes good with the bat, the all-rounder will give the Kiwis the late order fire power it badly needs.

Guptill at the top, WIlliamson, Taylor and Latham in the middle, Neesham as the all-rounder and Boult as the premier fast bowler are sureties in the Kiwi line-up. The conditions and nature of the opposition will dictate the other five slots.

Southee, despite his struggle of late, is fairly certain to partner Boult if there is seam movement on offer. All-rounder Colin de Grandhomme will likely also become an automatic pick thanks to his ability to produce the kind of delivery that cleaned up Virat Kohli in New Zealand’s first warm-up game.

Lockie Ferguson has taken 33 wickets since 2018 - all of them after the first powerplay (first 10 overs) making his case to be picked over Matt Henry.

The Kiwis tried Henry Nicholls as Guptill’s opening partner but an ordinary strike-rate of 65 might work against the left-hander. Colin Munro adds the much-needed firepower required at the top, and is best fitted to fill the outsize boots of Brendan McCullum.

Amongst the spinners, Santner’s experience of playing in England and his batting ability will get him the nod ahead of Sodhi, unless the Kiwis decide to field both spinners.

*Tom Latham is currently injured with a cracked finger

New Zealand has a well-rounded squad with, however, a few shortcomings. That said, the Kiwis have a history of overcoming their shortcomings when they step onto the global stage. Given a 10-team competition this year with each side playing the other once in a round-robin, the road to the top won’t be easy -- but it shouldn’t come as a surprise if the Black Caps make their fourth semifinal in a row.