No point in talking about umpiring decisions, says Bangladesh's Shanto 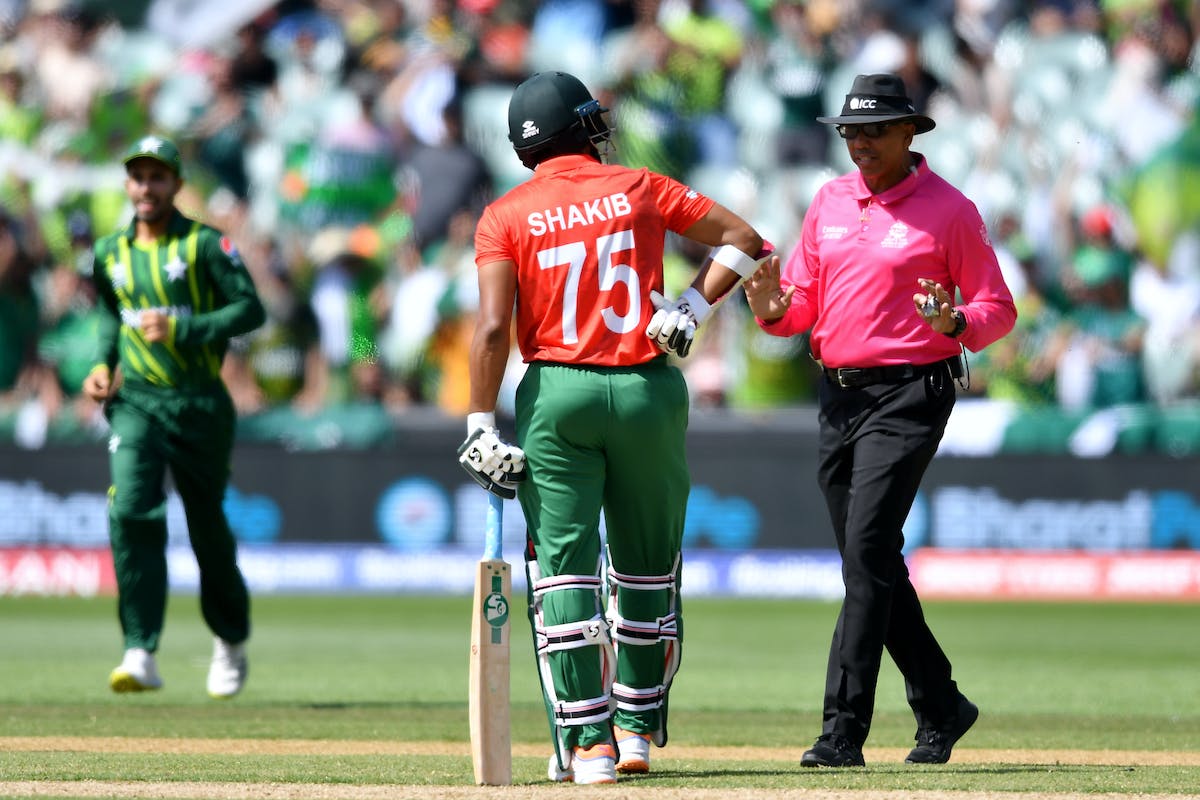 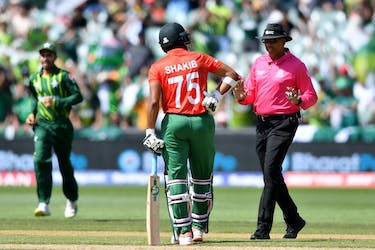 No point in talking about umpiring decisions, says Bangladesh's Shanto

Bangladesh have been unlucky with the umpiring decisions in the 2022 T20 World Cup. In their rain-curtailed Super 12 clash against India, umpires did not spot a fake throw from Virat Kohli that could've resulted in a five penalty runs which was the difference by which Bangladesh lost the match.

On Sunday against Pakistan, their captain Shakib al Hasan was given out for leg before wicket in Shadab Khan's bowling even after Ultra-Edge showed a spike when the ball was close to the bat. The third umpire adjudged the sound from the bat hitting the ground and Shakib had a small chat with the onfield umpires before walking off.

Bangladesh were in a good position until that time after reaching 73/1 in 10.3 overs before Soumya Sarkar (20 off 17) and Shakib were dismissed off consecutive deliveries. The Tigers went on to post a total of 127/8 in 20 overs which Pakistan chased down 18.1 overs and five wickets in hand.

Despite the contentious decision going against them, opening batter Najmul Hossain Shanto believes that his team's overall performance wasn't up to the mark.

"I don't think so (Shakib's wicket affected the team). But it was confusion for everyone. We don't think that (type of dismissal) happens normally but we were not focusing on that wicket. But we could have played some good cricket later on. I don't think it disturbed our concentration but what I felt as I was there with him as well as the whole team, it looked like it was not out and I was pretty sure that it wasn't out," Shanto, who scored 54 off 48 balls in the match, said.

Shanto felt that Bangladesh had other players who came in after Shakib were capable of playing big innings.

"Shakib bhai is naturally a big cricketer and all the time plays impactful innings and it helps our team, but batters who followed him were also capable and have done well in the past," the opener said in the post-match press conference.

"But the decision lies with the umpires and we cannot say much about it. I don't think the concentration was broken but we didn't play well in middle overs at the end of the day," Shanto said.

When quizzed about the fake fielding attempt against India, the 24-year year said that they have accept the match officials' decisions and move on.

"I don't think there is any point discussing these things (umpiring calls going against the team) as we don't have it in our control. Everything depends on the match referee and the umpires and so no matter how much we discuss it, there is no point in it," he said.

Bangladesh exit the World Cup with a comparatively good showing from the 2021 World Cup, where they lost their opening First Round match to Scotland and then lost all five games in the Super 12 stage. This year, they beat Netherlands and Zimbabwe in the Super 12 and finished fifth in Group 2.

Shanto was disappointed with the batting performance against Pakistan, where they failed on a batting good pitch.

"I think the wicket was 140-150 runs wicket and I think I should have stayed till the end but unfortunately I could not do it and that is the reason I am a bit disappointed. If the lower order batsman could have done well, we could have got a competitive match," the left hander said.

Only points finish mattered in the clash between Bangladesh and Pakistan after South Africa's defeat to Netherlands earlier in the day sent India and Pakistan through to the semifinals.