Not in the Indian team to fill anyone's shoes: Venkatesh Iyer 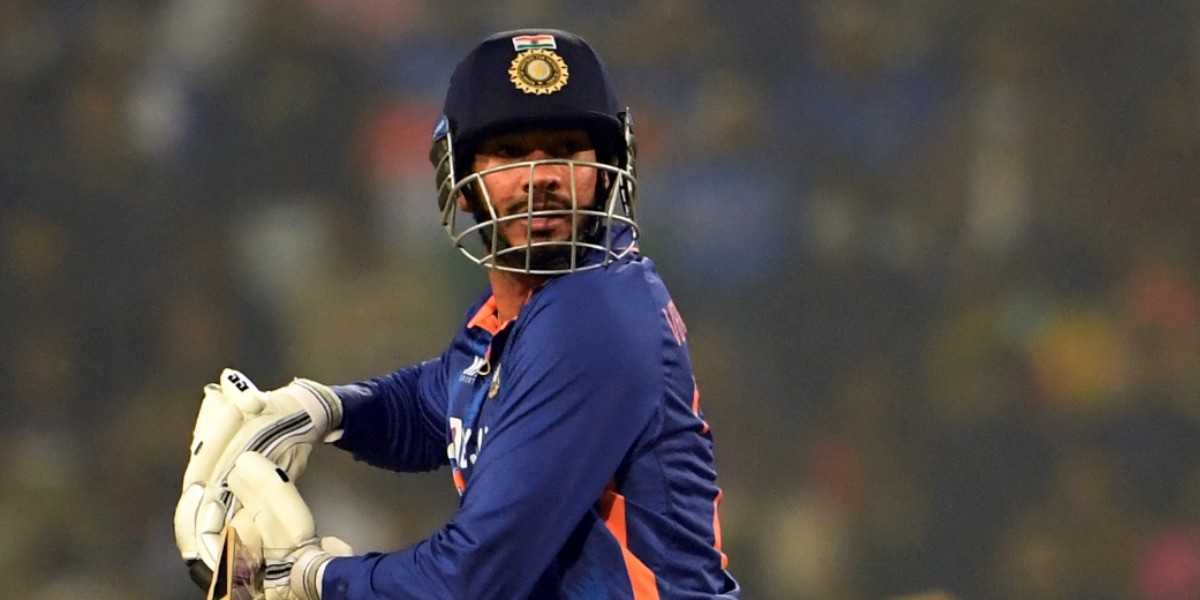 Not in the Indian team to fill anyone's shoes: Venkatesh Iyer

The India all-rounder had a stellar Vijay Hazare Trophy season, earning him a call-up to the ODIs against South Africa

After a dream start to his Indian Premier League (IPL) career with Kolkata Knight Riders (KKR), Venkatesh Iyer has gone on to make his international debut, playing three T20 Internationals (T20I) for India against New Zealand at home.

He has now been picked in the One-Day International (ODI) series in South Africa, starting January 19. Iyer largely seen as a like-for-like replacement for the injured Hardik Pandya says that he is not in the national team to fill anyone's shoes, but there to win India matches.

"I'm not here to fill anyone's shoes. I want to contribute to the team's victory, and that's my mindset," Iyer said in an interview with TOI.

"I'm not thinking that a certain player would come back or that he's not in the team, that's why I'm in the side. That's not how I function. I believe that I'm in the team because I can bat and bowl. You are an opener with your IPL team and in the Madhya Pradesh team, but the team requires a finisher in you."

With bouncy tracks on offer in South Africa, Iyer says he gets to play on all sorts of pitches in India in domestic cricket, which will make it easier for him to negotiate the tracks there.

"I think I've played a lot on bouncy tracks. The best thing about playing domestic cricket is that you get to play on a variety of tracks. In India, we have a lot of tracks where there's extra bounce. Obviously, that practice has come in handy. All my practice procedures are set, and I'm keeping up with them," Iyer said.

Speaking of his dream IPL season, Iyer said that he had no expectations going into the tournament, but wanted to enjoy every moment.

"I was very confident playing in the IPL. I knew that if I was given the opportunity I'll do well. But to be very honest, I didn't expect anything out of me," Iyer who scored 370 runs from 10 matches said.

"It was my first season, and I went in with the mindset to enjoy each and every moment in it, irrespective of whatever happens, the numbers, rather than put pressure on myself by expecting too much. This is what I'd worked for. I'm really happy that it came off good. I was happier that my team rose from No 7 to ultimately playing in the final."

Iyer has bowled just a couple of overs in T20Is so far. He is seen as more of a finisher in the team and his medium-pacers thus far have been treated more as a luxury, chipping in only when required.

Playing for Madhya Pradesh in the Vijay Hazare Trophy, Iyer scored 379 runs at 63.16 and with the ball, he chipped in with nine wickets at an economy rate of 5.75 in six matches.

Speaking of how he plans on convincing his captain to give him more overs, Iyer says, "It's not about convincing, but it's at the back of the captain and coach's mind to make me bowl more, and whenever I get the opportunity to bowl, I'll definitely try to give my best."

"I'm still working on my bowling and that process will never end. I'm trying to work harder on accuracy and bowling in the right areas."

Iyer has grown under the tutelage of Chandrakant Pandit under whom the all-rounder has blossomed. Speaking of Pandit's role, Iyer says, "The coming of Pandit sir has been amazing not just for me, but for entire MP cricket."

"The clarity of thought that I have now is something I never imagined I could have. We've excelled a lot as a team. Unfortunately, that couldn't show in the form of results as we haven't won any trophy, but as a team we're doing really well."

India announced the ODI squad with KL Rahul named captain in the absence of the injured Rohit Sharma. This will be the first ODI series for India, since Virat Kohli was axed.