Padikkal creates history; a day to remember for Iyer and Mishra 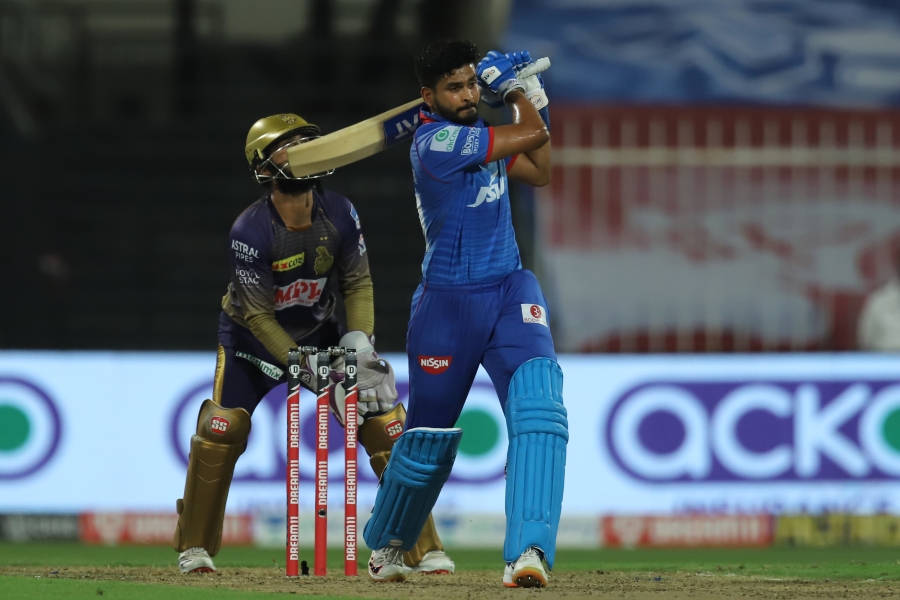 Padikkal creates history; a day to remember for Iyer and Mishra

Here are a few noteworthy statistical nuggets - apart from the usual number-crunching -  from the double-header on Saturday (3rd October).

There was a huge buzz around this kid from Karnataka, when he dominated the 2019-20 domestic season. Devdutt Padikkal, justified his selection with a 56 in his debut IPL match. Though he failed in his 2nd match, Padikkal came back strongly in his next two matches. He now has three 50+ scores in the four matches played. Hence, Padikkal became the first player in IPL to score three 50+ scores in the first four matches.

Padikkal, the quickest to three 50+ scores

Padikkal got to his third 50+ score in IPL and it just took him four innings to achieve that feat. The four innings is the fewest a batsmen has taken to reach three 50+ scores in IPL. Prior to him, Lendl Simmons for Mumbai Indians, Rohit Sharma for Deccan Chargers, Shaun Marsh for Kings XI Punjab and Gautam Gambhir for Delhi Capitals, held the record as all of them reached it in five innings. 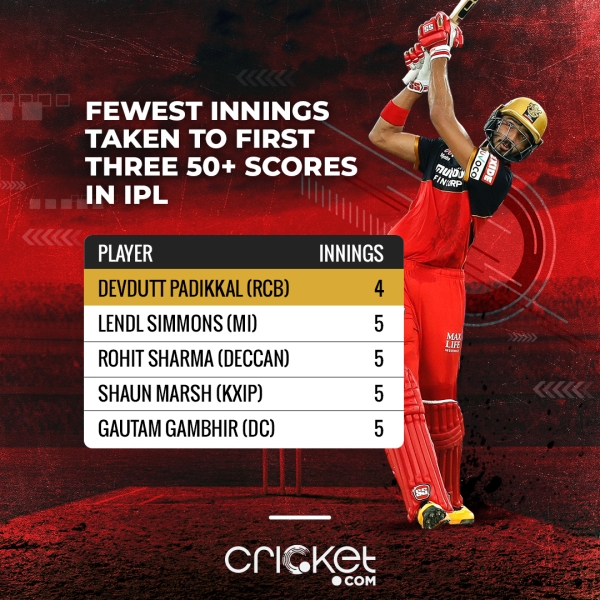 It was a day of records for Padikkal, he may not have broken the record for the youngest to score two consecutive 50+ scores, but, for sure it has been a monumental effort. Riding on the back of a half-century against Mumbai Indians, Padikkal went on to score another half-century against Rajasthan Royals, making it two in two. Hence, he became the third youngest batsmen to register two consecutive 50+ scores in IPL. Padikkal has played only four matches in IPL so far and already has set the league alight. 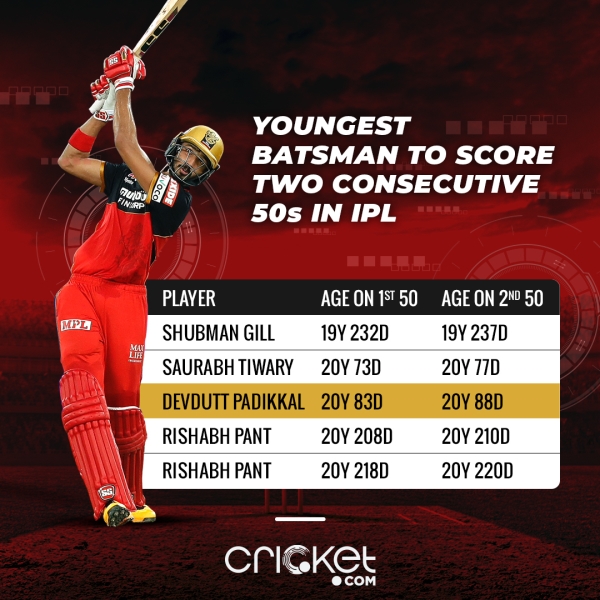 Sharjah has been a ground in which all the teams are looking to post their highest totals. In the previous match at this venue, Rajasthan Royals chased 224 and posted their highest total and today, Delhi Capitals registered their second-highest total in IPL. Thanks to small boundaries and Shreyas Iyer’s special innings, Delhi stacked up 228 runs for the loss of four wickets. The only time they scored higher than this was against Kings XI Punjab (231/4) in 2011 at the Arun Jaitley Stadium, Delhi.

If one team is setting high totals, the other team is unfortunately on the receiving end and today it was Kolkata Knight Riders. Generally, in IPL, Kolkata has always been one of those teams that has a disciplined bowling attack. However, on small grounds like Sharjah, it becomes really difficult to cut down the run flow. However, when it comes to Delhi, they have a liking to scoring big against Kolkata in IPL. Prior to this match, Delhi had posted 219/4 in the first innings in the 2018 edition of IPL at the Arun Jaitley Stadium, Delhi. Then, it was the highest total by a team against Kolkata in IPL. Today, Delhi scored 228/4 at the Sharjah Cricket Stadium, hence, registering the highest score against them in IPL.

Shreyas Iyer has been a vital cog of the Delhi Capitals unit in IPL. Since he took up the captaincy, his approach and intent has escalated. Today, Iyer went on to score a half-century off 26 balls, which is his fastest in IPL. Prior to this innings, against Royal Challengers Bangalore, Iyer had got to his 50 in 29 balls, which was his fastest. Iyer’s innings against Kolkata Knight Riders today, consisted of 7 fours and half a dozen sixes. He scored an unbeaten 88 off 38 balls at a strike rate of 231.6. 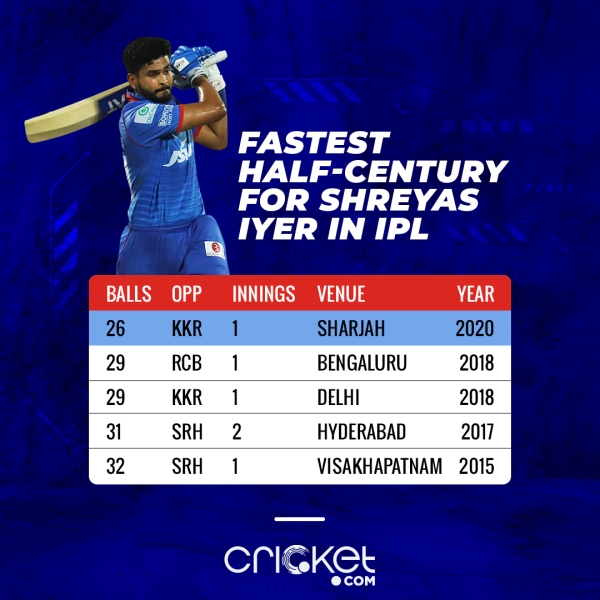 The senior pro has been the best bowler for Delhi Capitals in IPL. Apart from Amit Mishra, none of the other Delhi bowlers have picked up more than 50 wickets in IPL. With the wicket of Shubman Gill off the first ball of his second over, Mishra reached his 100th wicket in a Delhi jersey. As a result of that, Mishra became the 7th bowler in IPL to bag 100 wickets for a team. Lasith Malinga with 170 wickets for Mumbai Indians, has the most for a team in IPL. 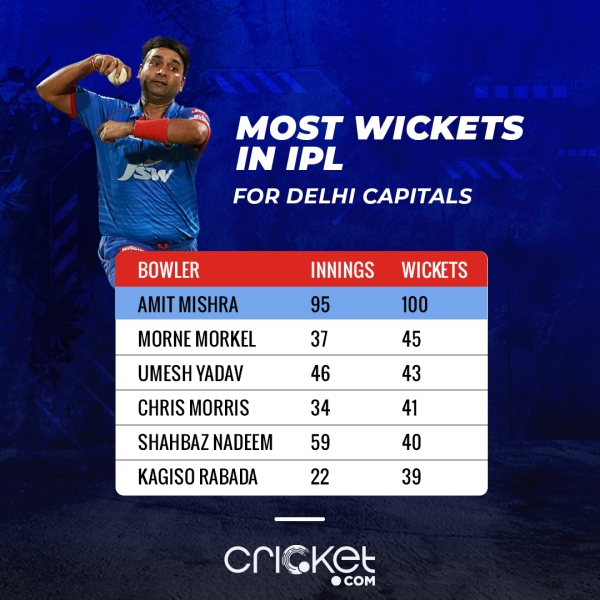 Most consecutive 200+ scores at a venue

It has been a complete feast for the batsmen at the Sharjah Cricket stadium in IPL 2020. Flurry of sixes, mountains of runs and agony for bowlers has been a feature at Sharjah. Yet again, in the third match at Sharjah this season, over 400 runs were scored and nearly 30 sixes were witnessed. Three matches, six innings and in all the six innings there has been a 200+ score this season. In IPL or in T20s, it is the most consecutive innings a 200+ score has been recorded.