Pakistan dropped former skipper Sarfaraz Ahmed from the country’s Twenty20 and Test squads for their upcoming Australian tour, while experienced players Shoaib Malik and Mohammad Hafeez were also given the axe in the shorter format.

Sarfraz, 32, was stripped last week of his Twenty20 International and Test captaincy, just days after Pakistan were routed 3-0 by Sri Lanka at home in the short format.

His place in both squads was taken by 27-year-old Mohammad Rizwan, whose only Test was in New Zealand in 2016.

The exit from T20Is means curtains for Malik who had already announced retirement from Tests and One-Day Internationals.

Hafeez was part of Pakistan’s Twenty20 squad in South Africa earlier this year but was not played. At 39, he has little hope of competing in international cricket again.

“We need to play aggressive cricket to achieve better results there,” said Misbah. “We have some exciting youngsters in the pace squad who could be surprise packages.”

Imran Khan senior, 32, returns to the Test squad after playing his last Test during the Australian tour in 2017.

And leg-spinner Usman Qadir -- son of the late legendary leggie Abdul Qadir -- will be part of the Twenty20 squad, with Misbah citing his experience playing in Australia’s Big Bash Twenty20 league earlier this year.

The lanky 37-year-old Mohammad Irfan, who played the last of his 20 Twenty20 internationals in the Twenty20 World Cup in India three years ago, is also part of the shorter format. 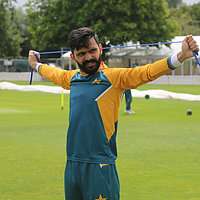