Pakistan look to avoid a whitewash against second-string Sri Lanka

Pakistan look to avoid a whitewash against second-string Sri Lanka

A series defeat in their own backyard against a second-string Sri Lankan unit despite being the No. 1 T20 side in the world is bound to sting. The series might have gone but Pakistan have one last shot at redemption as they look to salvage some pride in the last T20I in Lahore. Pakistan had won 25 of 29 T20Is since January 2017, a win percentage of 86.2%. This is before 2019 happened. This year they have only won one out of six.

The batting is what has let them down against Sri Lanka. Two successive top-order failures meaning the hosts have failed to chase down targets on both occasions. The biggest worry for them has been the form of their premier batsman Babar Azam. The No.1 T20I batsman in the world has scores of 13 & 3 so far.

The other batsmen have failed to fire too. Going back to Ahmed Shehzad and Umar Akmal has not worked at all and the likes of Fakhar Zaman, Sarfaraz Ahmed and Asif Ali too haven’t been effective.

Having said that, the Sri Lankan bowlers, without a chunk of their first-choice players have been exemplary. Nuwan Pradeep has led the pace attack with brilliance. He has varied his pace well while the likes of Wanindu Hasaranga and Isuru Udana too have stepped up when required. Pradeep is the leading wicket-taker so far in the series having picked up seven wickets averaging just 6.57. But the more eye-catching statistic here has been his economy of just 6.57, a huge improvement from his career economy of 9.94.

Hasaranga, the leg-spinner has been excellent. He kept the Pakistan batsmen on a tight leash in the first T20I going at five runs per over, while it was his spell in the second game that struck doom for the hosts. He removed Shehzad, Akmal and Sarfaraz in a single over to completely derail Pakistan’s chase as they went from 51/2 to 52/5 in the blink of an eye. Hasaranga has used his variations really well. His wrong’uns have been tough to pick and mixing it with the odd quicker one has worked wonders for him.

On the batting front, Sri Lanka have unearthed gems such as Bhanuka Rajapaksa, who has looked the part across both games. His 48-ball 77 in the second T20I was a delight to watch but more importantly, it was his assuredness against pace and spin alike that was key.

With several first-choice batsmen missing, the inexperienced unit has stepped up well. Captain Dasun Shanaka played important cameos in both games while Danushka Gunathilaka and Shehan Jayasuriya have all contributed in some part. Sri Lanka have managed scores of 165/5 and 182/6 in the two outings, no mean feat considering how slow the surfaces have played. They will have another tough assignment at hand but will be keen on inflicting a whitewash, something that will give this young side the much-needed boost.

As good as Sri Lanka have been, Pakistan have been ragged all around. The bowling has been wayward, fielding insipid and Sarfaraz has at most times looked clueless in marshalling his troops.

The sentiment was resonated in Misbah-ul-Haq, the head coach’s post-match press conference after the second T20I where he lambasted his side. “There was a clear difference between the two teams. Despite being inexperienced, they were disciplined and did everything right, while we completely failed to implement our plan. We failed overall, we are struggling in every department, and it’s a big eye-opener for us. We didn’t play to our strengths and couldn’t deliver,” he said.

The gulf in the two teams can be seen in the bowling statistics. Mohammad Hasnain, Pakistan’s leading wicket-taker in the series with three wickets has gone at an economy rate of 9.50, while Shadab Khan has conceded runs at 9.12. Mohammad Amir has remained wicketless across both games and has gone at more than eight an over. Imad Wasim has the best economy rate of all Pakistan bowlers but he has only managed one wicket so far.

Batting second has also not worked in Pakistan’s favour. The surface has gotten extremely slow in the second half but nothing really justifies scores of 101 and 147.

It has been a while since Pakistan has hosted a T20I but things haven’t really gone to plan for them. They will desperately hope to give the fans something to be happy about and look to bow out on a high.

The weather in Lahore is expected to be warm and dry for the third T20I too. 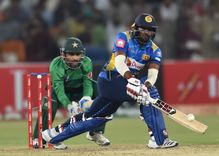