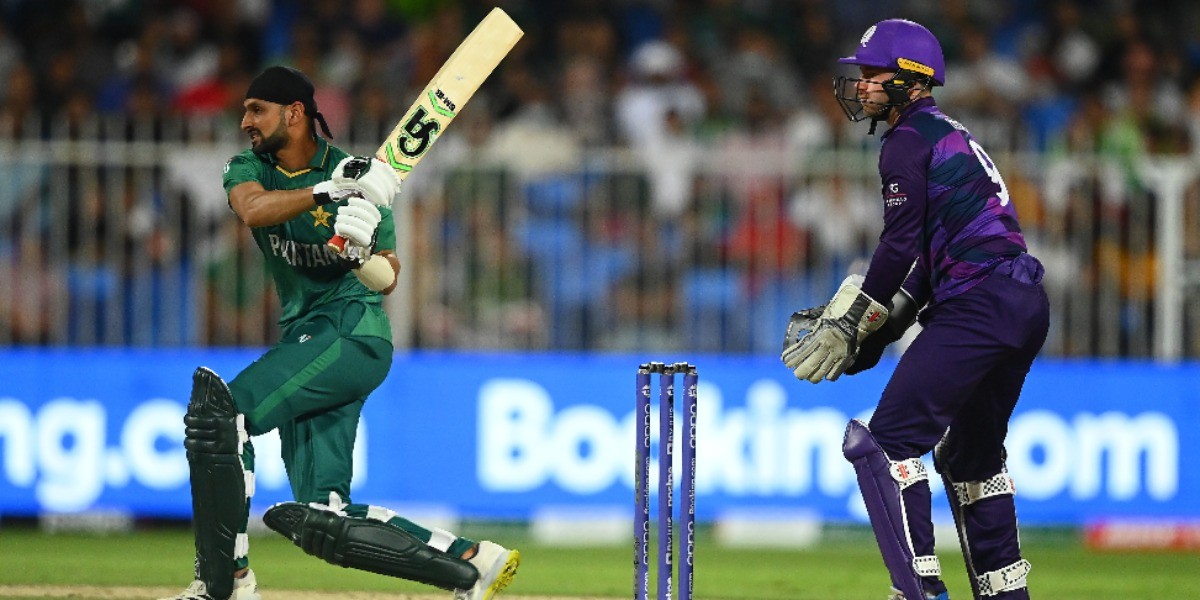 With five wins in the Super 12 stage, Pakistan enter the semi-finals unbeaten in this high-voltage tournament

A dominating performance by Pakistan in their final league match against Scotland powered them to a thumping 72-run win in an evening encounter at the Sharjah Cricket Stadium.

After electing to bat first, Babar Azam and Mohammad Rizwan started the innings steadily and scored 35 runs in the powerplay. On a sluggish surface on offer, the bowling unit of Scotland consistently bowled a nagging line and length to stifle the openers in the field restrictions. Their accuracy reaped massive dividends as Rizwan was caught behind off the first ball after the powerplay for 15 off Hamza Tahir. The left-arm spinner, playing his first match of the World Cup, dented the opposition batting unit with a massive blow early in the innings.

With runs hard to come by in the middle overs, Fakhar Zaman perished early as he tried to take the attack to the bowling unit of Scotland and was caught near the deep mid-wicket boundary. Despite twin blows, Babar and Mohammad Hafeez steadied the innings with a 53-run partnership for the third wicket.

Although Hafeez was dismissed for a quickfire 31, Babar continued to keep the scoreboard ticking. The skipper of the Pakistan side notched up a fluent half-century off 40 deliveries studded with five fours and one six. While run-scoring has been difficult at the venue, the right-handed batter has showcased his class and anchored the innings. 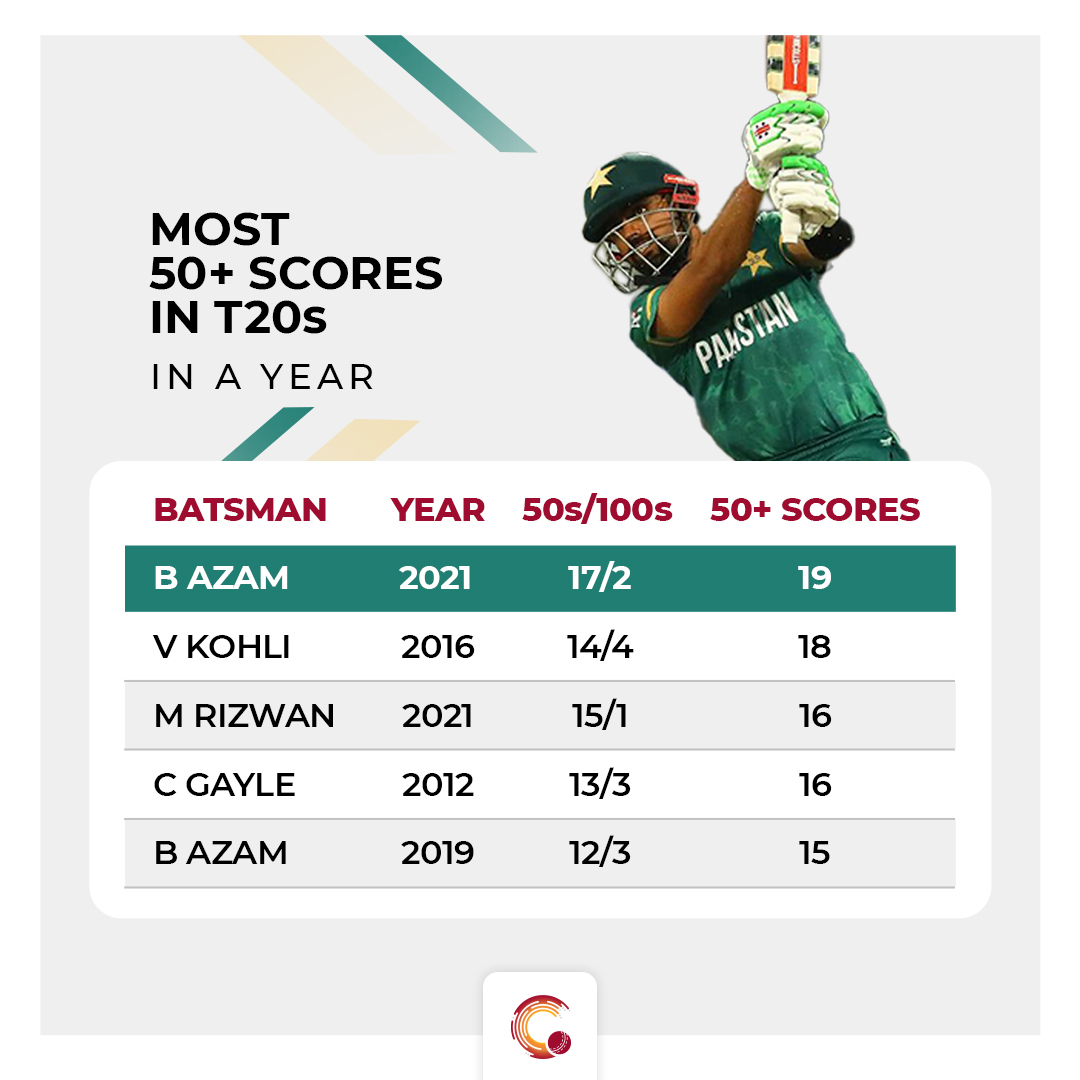 The 27-year old was well supported by experienced Shoaib Malik as the duo unleashed a flurry of strokes all around the ground to enthral the fans at the ground. However, Babar was dismissed for 66 off 47 deliveries with five boundaries and three sixes in the back end of the innings.

While most people expected the scoring rate to drop down drastically after the dismissal of a set batter, Malik had other ideas. One of the most experienced players in the team smashed a brutal half-century off 18 deliveries, which is the fastest by Pakistan player in T20 Internationals. His destructive innings with one boundary and six hits over the fence propelled the side to a mammoth total of 189/4 in their quota of 20 overs. 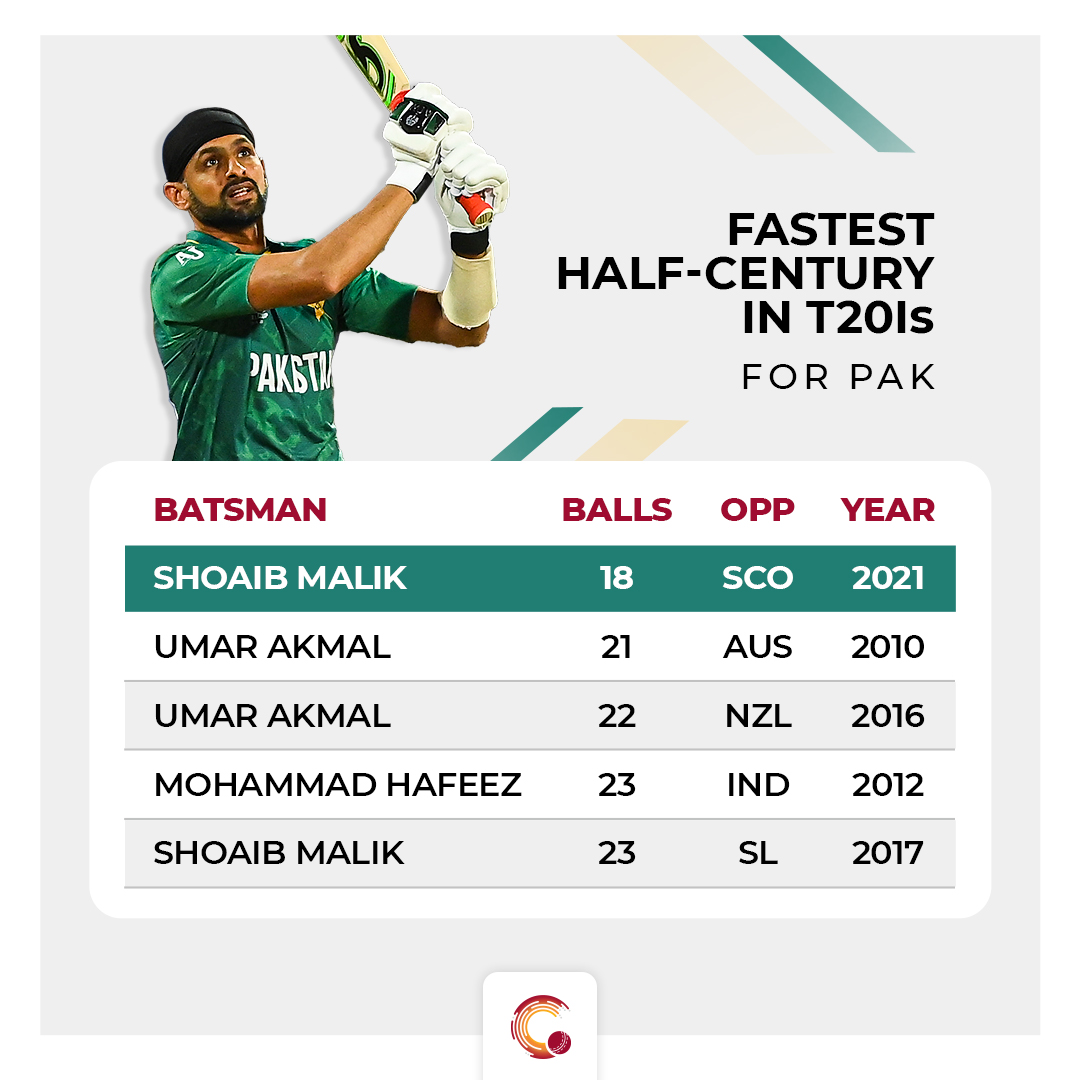 In pursuit of 190 runs, the opening combination of George Munsey and Kyle Coetzer stepped onto the field. The duo have been the mainstay in the batting unit of the side and have often given them a flying start in the powerplay. However, in this crucial match, the skipper of the Scotland side struggled with his timing all through the innings and scored nine off 16 deliveries.

The pressure of the run chase and the slowness of the surface resulted in Scotland losing a flurry of wickets in the middle overs. Shadab Khan, the leg spinner, wreaked havoc as he picked up two wickets in the 11th over to derail the batting unit. He picked up the wicket of Munsey for 17 off 31 deliveries, and followed it up with a wicket of Dylan Budge a couple of balls later, to help Pakistan inch closer to the win.

While all the attention and focus was on the accuracy displayed by the Pakistan bowling unit, Richie Berrington silently went about his business. He scored a well-crafted half-century to finish unbeaten on 54 off 37 balls studded with four boundaries and one six to help Scotland reach 117/6 in their 20 overs.

A commanding performance by the team enabled them to register a win by a resounding margin of 72 runs, which is the second-biggest win for Pakistan in the T20 World Cup. 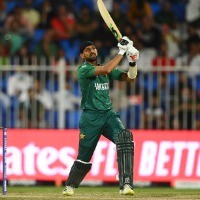 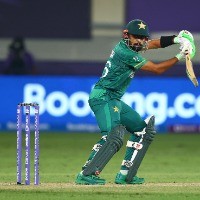 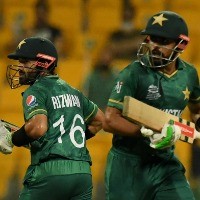 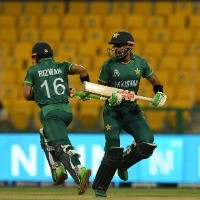 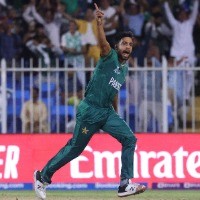 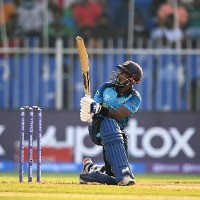