Rahane slammed his second century of IPL but it went in vain in the end.

Rishabh Pant’s (78* off 36) blitz overshadows Ajinkya Rahane’s brilliant century to hand Delhi Capitals (DC) a 6-wicket win over Rajasthan Royals (RR) to go top of the Indian Premier League (IPL) 2019 for the first time this season. RR on the other hand are still in seventh place with six points from 10 matches.

Rahane rode on his luck after being dropped on 16 by Ishant Sharma, scoring his second IPL century off just 58 deliveries. The former RR skipper looked in sublime form throughout the game and his 130-run stand off just 75 deliveries for the second wicket with Steven Smith (50) set-up the match for his team, after the unfortunate run-out of Sanju Samson. Ashton Turner registered yet another golden duck and now is the first batsman to be dismissed on a duck on five continuous occasions. Stuart Binny then struck a couple of boundaries in the end to take RR’s score to 191 for 6.

Ishant was the pick of the bowlers for DC, finishing with 1 for 29 from his 4 overs. He bowled at the right channels, with the right speed and as a result, the batsmen found it difficult to put him away. Spinners Amit Mishra (0-28 from 3 overs) and Akshar Patel (1 for 39 from 4 overs) were taken apart by the RR batsmen. Kagiso Rabada (2 for 37) bowled with a lot of pace but lacked direction and the batsmen were happy to use his pace and play him around the corner on most occasions. However, he bowled excellent Yorkers in the final over of the innings to get rid of Binny and Riyan Parag.

DC opener Shikhar Dhawan looked in excellent form. He gave his team an ideal start, along with Prithvi Shaw (42), he put on 72 off just 45 deliveries, giving the middle-order the ideal platform. Shreyas Iyer fell early, but Pant slammed a 26-ball fifty and along with Shaw, looked set to take his team home. When Shaw was dismissed, DC still needed 31 runs to win. Sherfane Rutherford hit a couple of boundaries to take DC closer, but Pant played responsibly – unlike some of his previous matches where he has thrown his wicket away at similar situations – to take his side home in the end. With 12 needed off 7, Pant smashed Jofra Archer over long on to take the equation to run-a-ball from the final over. That was way too little for Jaydev Unadkat to defend.

RR will be disappointed not to have scored in excess of 200 considering the way Rahane and Smith were batting. However, DC, bowled well at the depth to keep themselves in the game. After the start Dhawan and Shaw gave them, they did not look back from there and collected valuable two points.

At the toss, it was DC who won the toss and elected to field. RR went into the game unchanged, while DC brought back Chris Morris in place of leg-spinner Sandeep Lamichhane.

After Sanju Samson was run-out at the non-striker’s end for a duck withiut facing a delivery, RR’s win % dropped by 6 and stood at 36%. Interestingly, their win % did not drop again for the rest of the innings.

Once Dhawan’s magnificent innings of 54 off 27 came to an end in the 8th over, DC’s win % took a dip by 10 and their chances of winning at that point was just 29%. However, a composed innings from Shaw and a match-winning effort from Pant eventually took DC over the line. 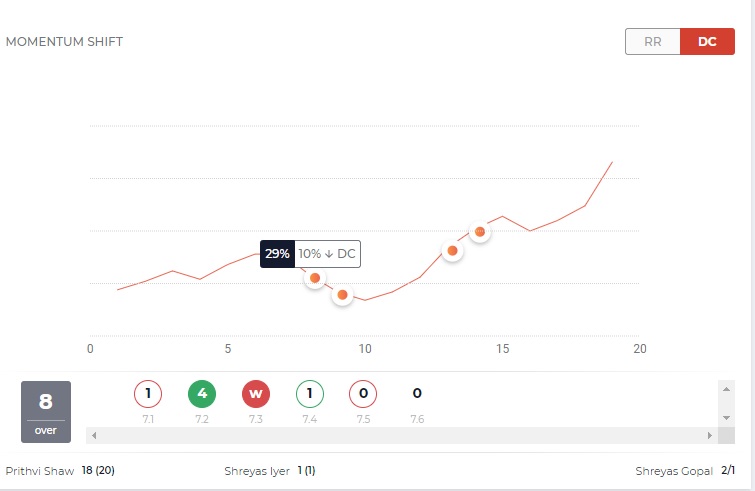 For more such insights, check out the Criclytics engine on our website.