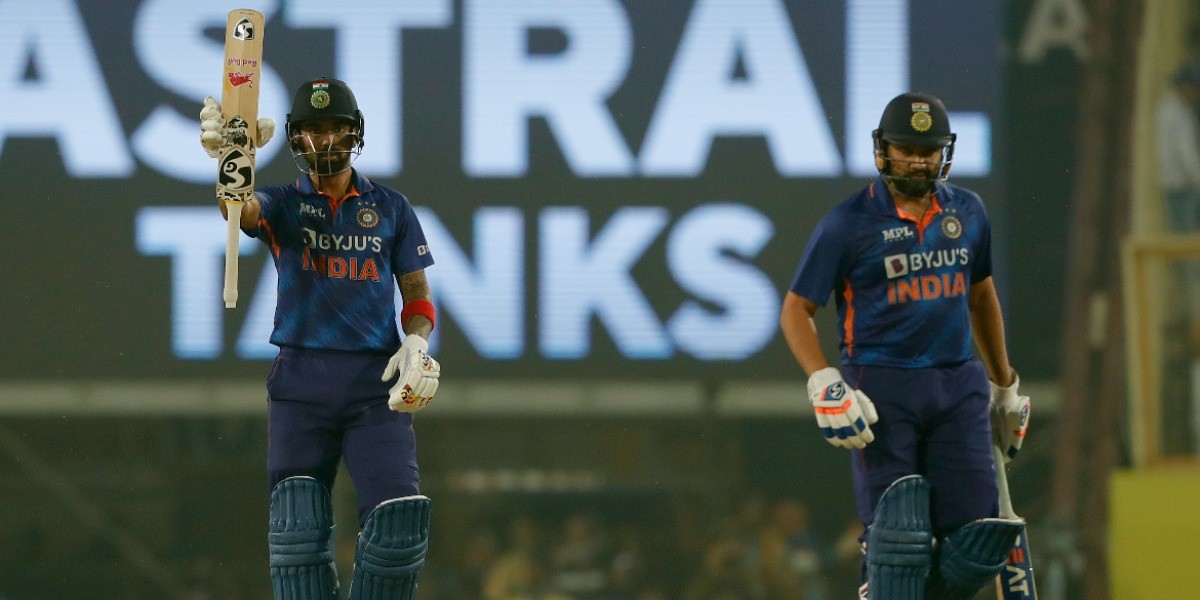 Cruising at 64 for one in the powerplay, the Kiwis suddenly hit a roadblock in the middle overs and managed just 64 runs from 7 to 16 overs

Skipper Rohit Sharma and his deputy KL Rahul stitched an enterprising 117-run opening stand to power India to a comfortable seven-wicket win over New Zealand in the second T20 International and take an unassailable 2-0 lead in the three-match series here on Friday. Chasing a modest 154 under heavy dew condition, the Indian captain and vice-captain started off in contrasting styles en route to their respective half-centuries.

Quiet at start, Rohit stepped up in the middle overs smashing five sixes and one four en route to his 36-ball 55. Rahul started off in a brisk fashion and top-scored with 65 from 49 balls with two sixes and six fours in a 117-run opening stand that virtually sealed the chase. The duo got out in the space of 13 balls but by then India needed just 19 off 27 balls and Rishabh Pant sealed the issue with a straight six over Jimmy Neesham's head in the 18th over to take India home with 16 balls to spare.

The third and final T20I is scheduled to be played at the iconic Eden Gardens in Kolkata on Sunday. Rahul made his aggressive intent clear from the onset and raced to 15 off 12 balls before his captain could face a delivery. Rahul was middling the ball beautifully and played the role of the aggressor, while Rohit was happy to bide his time in the middle giving India a sedate and sensible start. There was a brief lull in the middle with 23 balls without a boundary before Rohit suddenly switched gears just before the halfway mark.

Scoring just 16 off 18 balls, Rohit decided to take on left-arm spinner Mitchell Santner and hit him for two sixes in the mid-wicket and long-on region in an over that yielded 16 runs. Suddenly the equation looked at par with 75 needed in the back-10 and Rahul, meanwhile, brought up his 16th T20I fifty in 40 balls with a flat six off pacer Adam Milne.

Earlier, India rode on a tight bowling display by the spin duo of Ravichandran Ashwin and Axar Patel to stymie New Zealand's explosive start and restrict the visitors to a modest 153 for six. In a must-win match for the Kiwis, who are trailing 0-1 in the three-match series, Martin Guptill (31 off 15 balls) and Daryl Mitchell (31 off 28 balls) took the Indian pacers to the cleaners after being put into bat.

Cruising at 64 for one in the powerplay, the Kiwis suddenly hit a roadblock in the crucial middle overs and managed just 64 runs from 7 to 16 overs with Ashwin (1/19) and Axar (1/26) dominating the New Zealand batters in the dew-laden condition. Skipper Rohit cleverly used Ashwin and Axar in the middle overs to restrict the run flow. Ashwin was simply sensational with his variations as the New Zealand batters found it difficult to go after him.

Axar got the wicket of Mark Chapman, fresh from a half-century in Jaipur as the left-hander failed to clear the long-on boundary. The duo's remarkable effort in the middle gave the pace attack some respite and newcomer Harshal Patel, who made his T20I debut four days shy of his 31st birthday, returned with impressive figures of 2 for 25.

Two days after his tidy display in Jaipur, Bhuvneshwar Kumar conceded 37 runs from his first three but made it up in his final over, giving away just two runs and also took the vital wicket of Jimmy Neesham that further pegged the Kiwis back. The Kiwis were off to a flier in the powerplay with Guptill smashing his way to a 15-ball 31 (2x6s, 3x4s) after being dropped on eight.

That innings saw Guptill (3231 runs) surpass star Indian batsman Virat Kohli (3227) as the leading run-getter in T20 Internationals. Guptill smashed Bhuvenshwar for back-to-back boundaries but there was an opportunity in the fourth ball when he mishit over the long-off region.

KL Rahul made a terrific attempt running backward and nearly got hold of the ball before it slipped out of his hands. After conceding 14 runs in his first over, Bhuvneshwar gave away 13 in his next over with Guptill smacking him over his head for a six. Mitchell also joined the party as the visitors cruised to 42 from the first overs.

The last T20I of the series will be played on Sunday at Eden Gardens, Kolkata.