Rajasthan eye crucial win to avoid getting into playoff-scrap 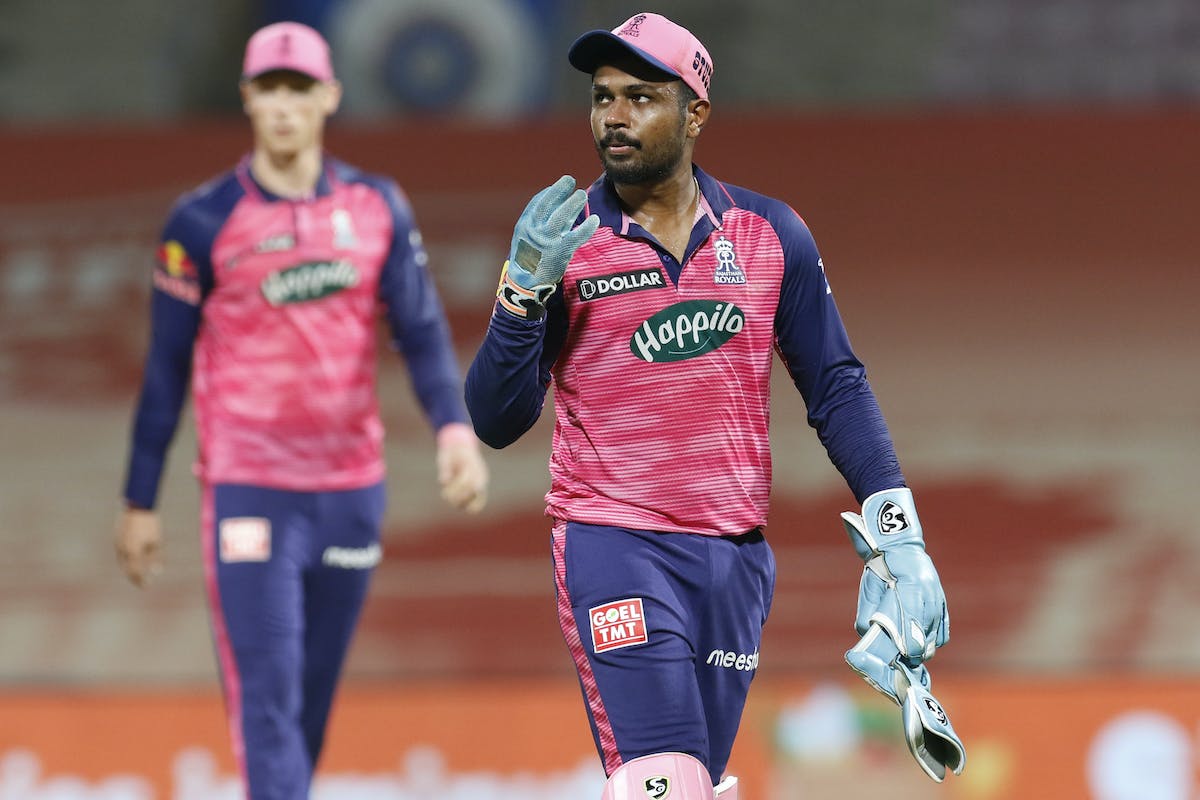 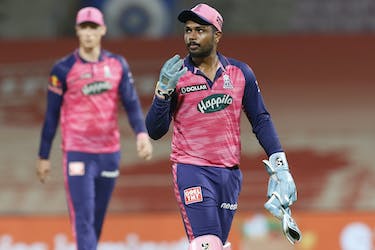 Rajasthan eye crucial win to avoid getting into playoff-scrap

A victory for LSG, meanwhile, would make them the second team to qualify for the playoffs

There was a time this season, not too long ago, where it felt like three teams would seal playoff spots well in advance, saving themselves from the hassle of getting into a playoff-spot tussle in the final week. The three sides were Gujarat Titans, Lucknow Super Giants and Rajasthan Royals, all of whom had raced to 12+ points at a time where other teams were stuck in single digits.

The Titans have already qualified for the playoffs, and the Super Giants are all but there.

But things are getting slightly tricky for the Royals, who have dug a slight hole for themselves by losing three of their last four games. Sanju Samson’s side, make no mistake, are still in pole position to make it to the final four, but they no longer have the cushion that they enjoyed a fortnight ago.

With 14 points, a NRR of +0.228 and still two games in hand, the Royals needn’t panic yet, but a defeat on Sunday against Lucknow will see them enter the final week of the group stages under immense pressure, locked in battle with those currently below them for the final two qualification spots. Technically, then, Sunday’s clash isn’t a ‘do-or-die’ encounter for Rajasthan, but they will enter the contest knowing it’s a game they can ill-afford to lose.

Lucknow, too, don’t have a ‘Q’ next to their name, but one suspects their ambitions will be far greater. KL Rahul’s side are already on 16 points with two games still left, and from here, the Super Giants might consider not finishing in the top two a failure.

Unlike RR, LSG have a cushion — they can afford to lose on Sunday — but having been trounced by the Titans in their previous encounter, the Super Giants would be itching to get back to winning ways, particularly with the knockouts beckoning.

Batting first has become a concern for Rajasthan

However, the script has reversed in the second half.

Each of the Royals’ last three defeats have come when they’ve batted first, and the team has struggled to even post par totals.

160, 152 and 158 is what the Royals managed the last three times they batted first, and each of the three totals were chased down rather comfortably by their opponents. Quite concerningly, all three defeats came to sides well below them on the points table.

What’s evident is that the team has been suffering as a result of the dip in form endured by their Big 3 — Buttler, Samson and Hetmyer — all of whom have fizzled out considerably in the second half, particularly whilst batting first. Buttler and Samson, in particular, have not just been not scoring runs with the same consistency but have also had issues with their strike rate. Buttler, the last three times he’s batted first, has managed to strike at a mere 109.1, hitting a total of just 4 sixes in 88 balls. 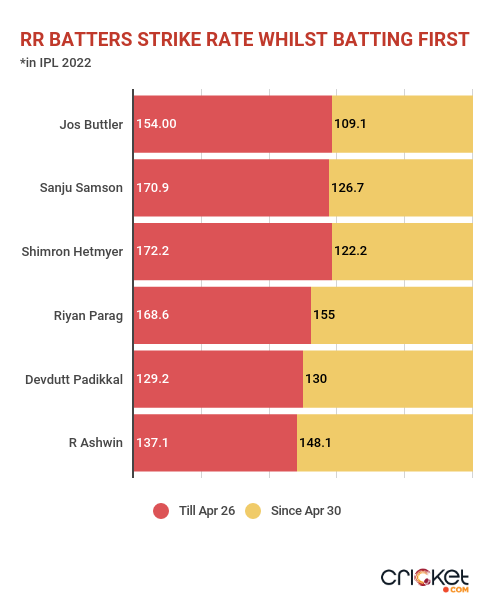 There’s also been question marks over how RR have utilized their resources. Against the Knight Riders, Hetmyer didn’t get to bat until the 17th over, and even though he finished with 27* off 13,  the total they ended with (152/5) ultimately proved to be not enough. RR, not for the first time, promoted Ashwin to No.3 in their last encounter, and though the veteran did a fine job to score a brisk half-century, one wonders if the team would have been better off with the likes of Samson, Parag and van der Dussen facing more deliveries. All of the aforementioned batters entered the crease only after the 15th over, and ended up facing just 19 deliveries between them.

Slumps like these are normal through the course of a long season, but RR would be hoping for their big guns to show up on Sunday and help them edge close to qualification.

The dwindling form of Jason Holder 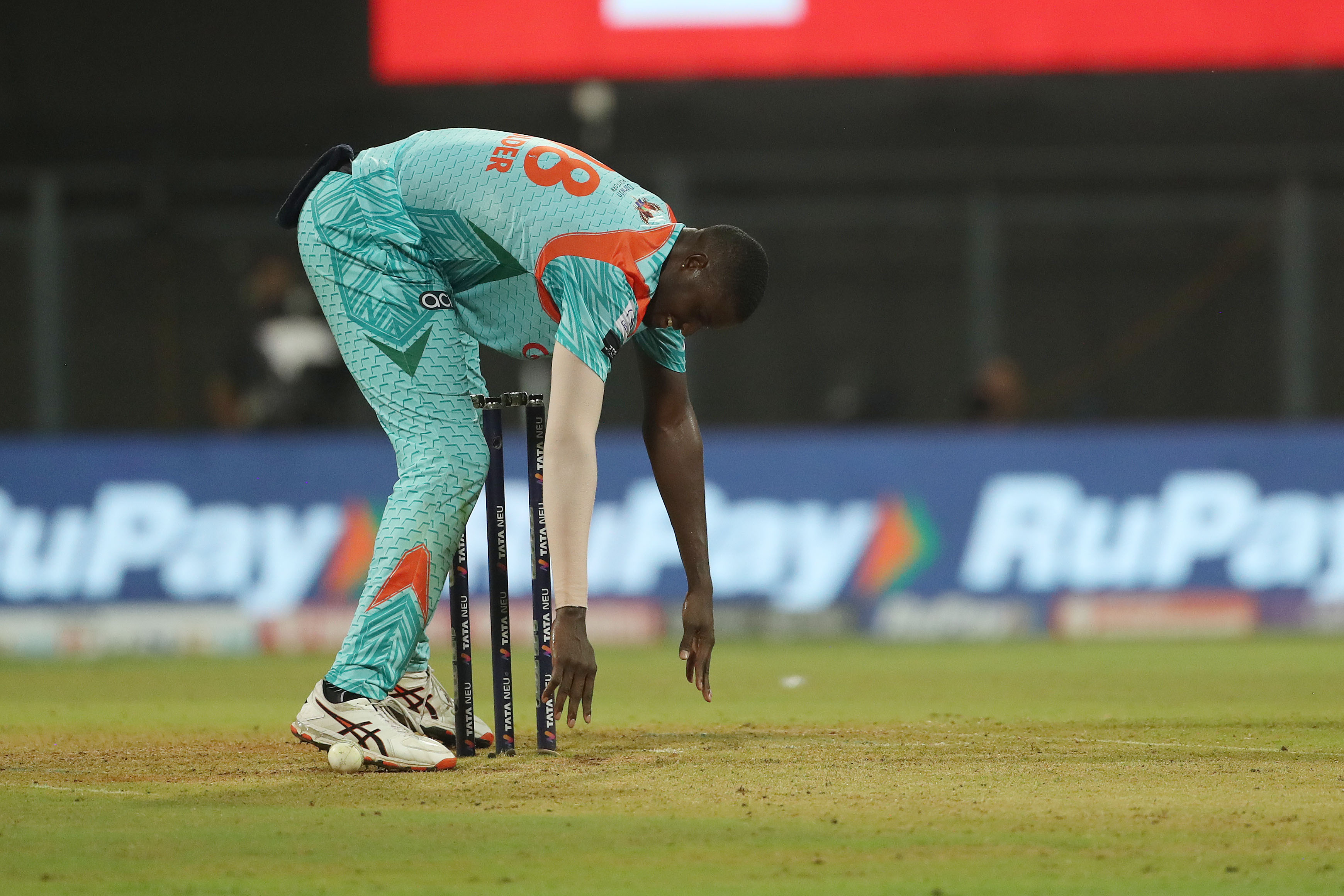 Jason Holder, after arriving late, started the season with a bang for the Super Giants, and in no time became the quiet achiever of the pack. He delivered for Rahul whenever there was a need, especially at the death, and became an integral part of the very successful LSG bowling unit.

Currently, however, the West Indian is in the midst of a mini slump, and in LSG’s previous encounter against GT he bowled arguably his worst spell of the season. On a two-paced Pune wicket where just a total of 226 runs were scored across nearly 34 overs, Holder finished with figures of 1/41 off his 4, taken apart by the Gujarat batters. His spell certainly was not the difference between the two sides, for it was the batting that let LSG down, but it marked the third consecutive instance of Holder being taken to the cleaners.

The 30-year-old has 4 wickets to his name across the last three matches, thanks to having cleaned up the KKR tail, but in the said period he’s leaked runs at an ER of 11.1. His form with the ball hasn’t cost the side due to the other seamers doing an exceptionally good job — Mohsin, Avesh and Chameera, in the same duration, have maintained an ER of 3.6, 6.4 and 8.4 respectively — but it is certainly starting to become a concern, especially with the playoffs nearing.

It’d be unrealistic to expect Moshin and Avesh to keep their current form up till the end of the season; both seamers, in fact, are due a failure anytime now. LSG hence need Holder to rediscover his form with the ball to ensure there is no over-dependence on select individuals on the bowling front.

Expect Lucknow to bring back Ravi Bishnoi, who they curiously left out against the Titans. The Super Giants have enough batting depth, thus it’ll likely be Karan Sharma who makes way for the leg-spinner.

The availability of Shimron Hetmyer remains unknown. The southpaw will take the place of van der Dussen should he be available. Else, expect the Royals to field an unchanged XI.