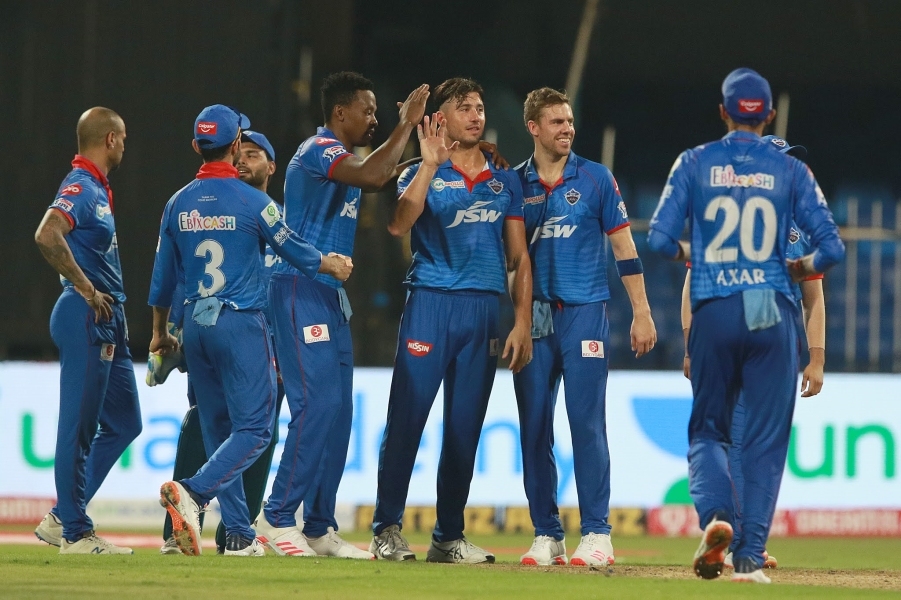 Rajasthan’s form since they won the opening two fixtures, in Sharjah has tapered off like never before. The side which at one point was seemingly unbeatable are now looking jaded and frankly unsure about their combination. Match 23 of IPL 2020 saw a similar story pan out.

Having lost three games on the trot, Rajasthan would have hoped for a better result at their favourite venue, Sharjah. Instead, what they received was further humiliation, this time at the hands of Delhi Capitals. This despite putting up a strong bowling effort.

In Sharjah, where scores of 200+ are a given, Rajasthan restricted Delhi to a par 184/8 with Jofra Archer leading the pace attack. In reply though, the Steve Smith-led side went missing with none of the batsmen showing any intent. The Delhi bowlers, ruthless as they were, bowled Rajasthan out for 138 thereby winning the game by 46 runs and further consolidating their position at the top of table. 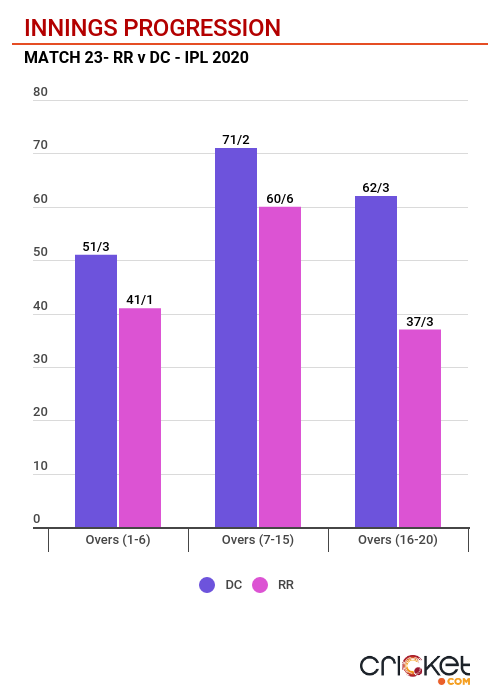 Steve Smith’s decision to field first was vindicated with Shikhar Dhawan, Prithvi Shaw and Shreyas Iyer all falling inside the Powerplay. Archer, who was rapid and on point, drew first blood getting the wicket of Dhawan for 5 when the southpaw flicked an innocuous length ball straight to midwicket. The pacer then beat Shaw with pace before a stunning piece of fielding by Yashasvi Jaiswal saw the back of Iyer.

The penultimate ball of the sixth over was bunted to the right of Jaiswal at cover. The Delhi captain sensing the opportunity for a single took off but Jaiswal flung to his right, picked the ball up and whilst being on his haunches, struck down the stumps to catch Iyer short of his crease.

Delhi reached 51/3 at the end of the six-over mark nowhere close to the Sharjah standards.

Marcus Stoinis was key in the middle overs and ideally would have wanted Rishabh Pant to steer the side forward but what can only be called a brainfade saw the wicket-keeper batsman walking back to the pavilion. It was the 10th over of the innings with Delhi on 79/4. A slightly short of a length delivery was nudged to mid-on. The fielder was onto the ball immediately but for some reason, Pant took off without even looking where the ball went. Stonis, clueless tried sending Pant back but it was too late.

The wicket slowed things down with the next few overs going for very few. Hetmyer broke the shackles smacking Andrew Tye over the midwicket fence and just when it seemed Delhi were getting back in the groove, Rahul Tewatia struck. A soft dismissal of the highest order saw Stoinis cut a wide, absolutely ordinary delivery straight to Steve Smith at point. Stoinis hit 4 sixes in his 30-ball 39 but his dismissal couldn’t have come at a worse time for Delhi.

Hetmyer struck 45 off 24 balls, his innings studded with a four and five sixes. He fell looking to clear Kartik Tyagi but was caught well at long on by Tewatia. Things would have still gone Rajasthan’s way but the 19th over changed the complexion of the game. The first ball of the over was smashed over Tye’s head by Axar Patel before an awful beamer went between Jos Buttler’s legs for a no-ball and four byes. The free hit was smoked for a six and even though Patel fell of the final ball, he did his job.

Archer bowled a fabulous last over going for just 3 runs and he picked up the wicket of Harshal Patel. It wasn’t the usual Sharjah score we are accustomed to but Delhi with the likes of Anrich Nortje and Kagiso Rabada would have fancied their chances.

The chase started on the wrong foot for Rajasthan from the outset with their mainstay Jos Buttler falling to who else but his nemesis, R Ashwin. There were a few moments in the Powerplay but it was mostly on an even keel with Rajasthan scoring 41 runs and Delhi picking a wicket. 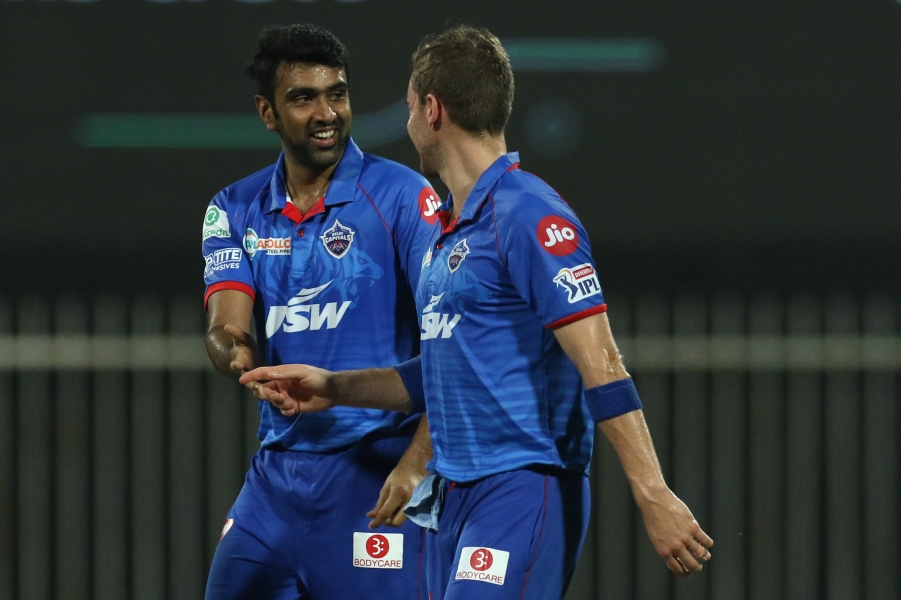 The middle overs, a Delhi specialty was where they took the game away totally from Rajasthan. They tightened the noose with a mixture of pace and spin doing most of the damage picking six wickets for 60 runs between overs 6-15.

The pressure was always on Rajasthan with Jaiswal going at a strike of only 60. Smith looked to up the ante and seemed to have timed Nortje well but probably too well for his liking. The ball went like a bullet to square leg where Hetmyer running forward completed a stunning take diving low.

It was a slippery slide thereon for Rajasthan. Stoinis first removed the woefully out of form Samson for 5 before sending back Jaiswal for 34. Delhi further turned the screws when Ashwin induced a leading-edge off Mahipal Lomror’s bat that went straight to cover. From 56/1, Rajasthan were struggling at 100/7 with little to no hope of chasing down Rajasthan’s target.

The little hope was only due to Tewatia being out there but lightning rarely does strike twice and despite his 29-ball 38, Rajasthan were nowhere close to the target. The southpaw fell in the final over to Rabada before the pacer ended Rajasthan’s misery by claiming the final wicket of Varun Aaron.

It must be said Rajasthan looked off the boil all through. There was never any intent whatsoever and the big hits never arrived. Delhi bowlers were ruthless as they bundled out Rajasthan for 138. Rabada was the pick of the bowlers, returning 3 for 35 while Stoinis and Ashwin picked 2 wickets each. 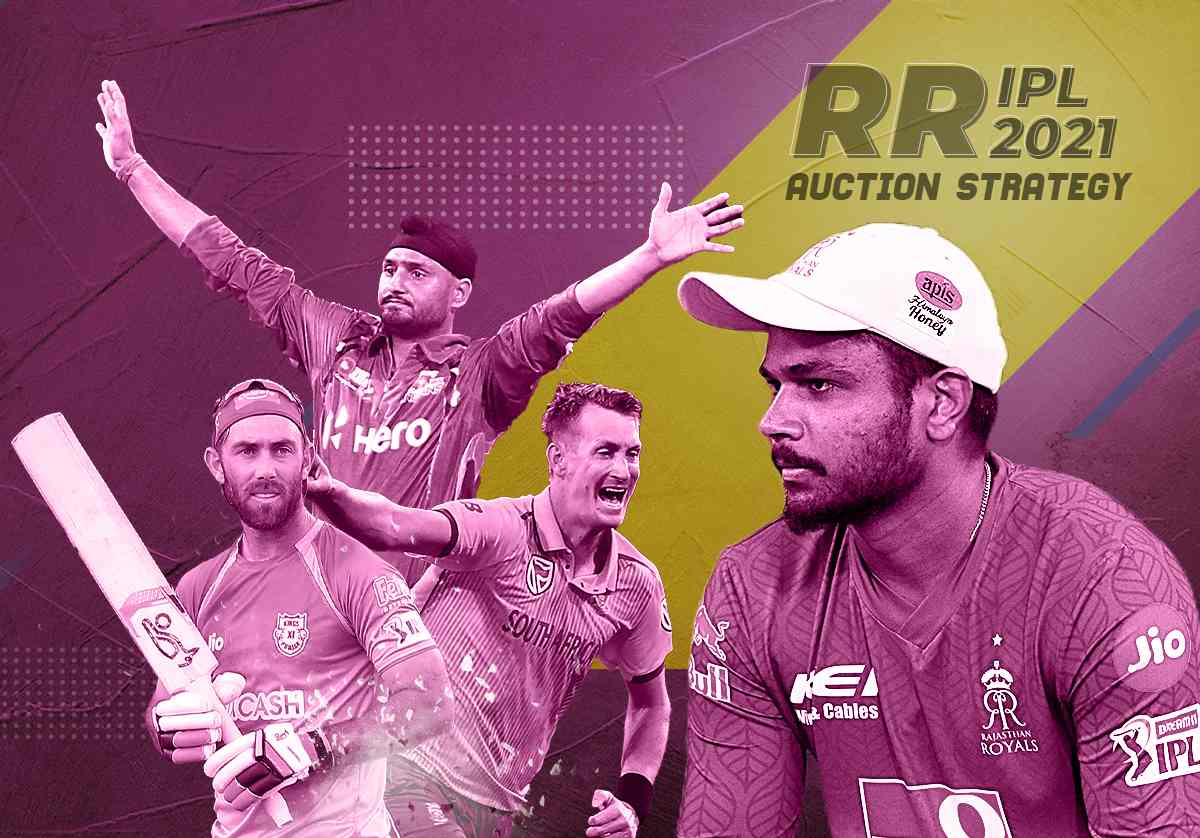