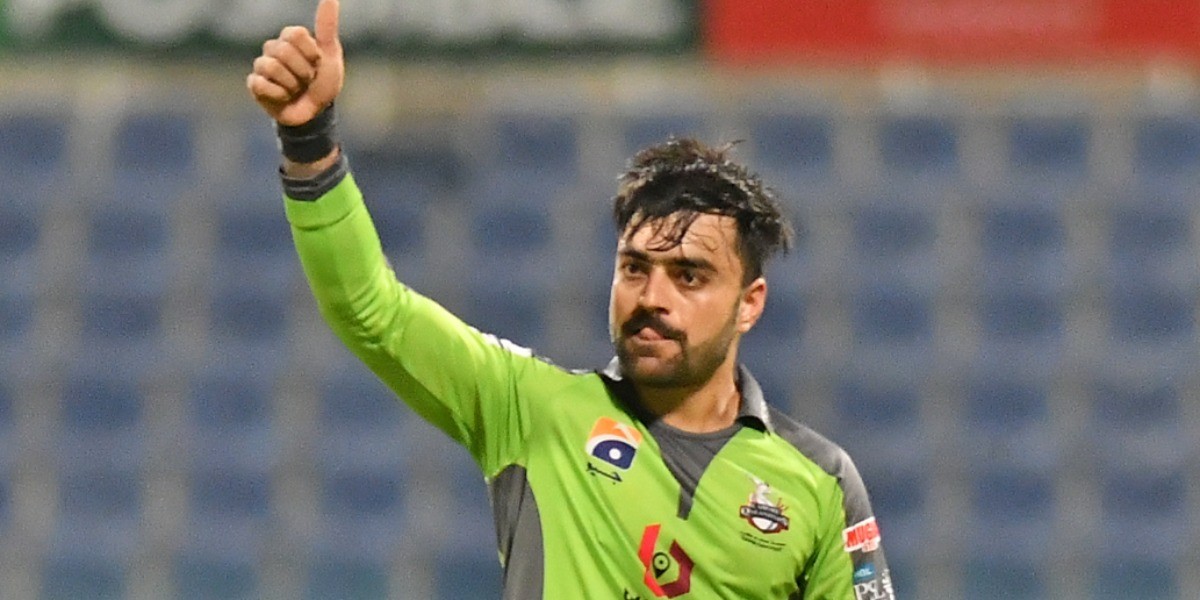 Afghanistan leg-spinner Rashid Khan starred once again as Lahore Qalandars registered a 10-run win over Peshawar Zalmi in Match 17 of the Pakistan Super League (PSL) 2021 in Abu Dhabi. Rashid finished with figures of 5 for 20 from his four overs to completely derail the Zalmi batting line-up. 15 of those 20 runs had come in Rashid's first over.

Shoaib Malik (73) and some late onslaught from Wahab Riaz (17) and Umaid Asif (23*) took Peshawar closer to the target, but in the end, it was a little too much for them.  Qalandars now sit comfortably at the top of the points table with 10 points – four clear of Karachi Kings, the second-placed team – from six matches. Zalmi are on the fourth spot with six points.

The epic collapse – during which Zalmi lost four wickets 17 runs – began in the 10th over of the run-chase as Rashid struck twice in three balls to send David Miller and Rovman Powell packing.  The spinner’s next over was a wicket maiden. He again took two wickets in three balls. The dismissed batsmen this time being Sherfane Rutherford bowled with a slider after being set up with three consecutive googlies, and Fabian Allen, trapped leg before with a googly.

Malik, however, continued to put up a resistance as he smoked Ahmed Daniyal and Haris Rauf for boundaries. The all-rounder struck four sixes and seven fours in his 48-ball stay at the crease which was cut short by a hit wicket off Rauf in the penultimate over. The match, however, did not end without a twist as Umaid Asif spanked Shaheen Afridi for two sixes in the last over.

That Qalandars posted a total that their bowlers were able to defend was because of Tim David’s maiden T20 half-century in HBL PSL. The Singapore-born right-handed batsman smashed an unbeaten 36-ball 64 as Qalandars added a staggering 74 runs in the last five overs.

Qalandars had an abysmal start to their innings as Wahab rattled Fakhar Zaman’s stumps with a perfect yorker in the first over. Tall fast-bowler Mohammad Irfan removed Qalandars’ captain Sohail Akhtar and Umaid Asif’s bouncer got the better of Mohammad Hafeez. Qalandars were 18 for three at the end of the powerplay – the lowest by a team in the history of HBL PSL.

Zalmi’s pacers bowled as many as 22 dots in the first six overs and they continued to deprive the batting side of scoring opportunities after the powerplay overs. Wahab took a magnificent catch diving to his left to hand Mohammad Imran his only wicket of the match and send Mohammad Faizan back to the pavilion in the eighth over.

The tide turned from the 11th over with the introduction of Fabien Allen into the attack. The left-arm orthodox was smoked for a four and a six by Ben Dunk, and Tim David spanked Irfan for a six and a four in the next over. The next two overs – delivered by Wahab and Umaid – brought only 11 runs to Qalandars.

Dunk smashed Imran for two sixes in the 15th before he was caught off Allen in the next, not before smashing him for a six. The Australian wicketkeeper-batsman struck three sixes and two fours in his 33-ball 48. Dunk and David added 81 runs for the fifth wicket.

The last two overs brought 44 runs for Qalandars as the duo of David and Faulkner struck five sixes with the latter blasting two of them before he was run out on the penultimate ball. Faulkner made 22 off seven.  This was the only third instance of a team defending a total successfully in PSL 2021.

Player of the Match: Rashid Khan

(With inputs from PSL Media Release)