Red-faced New Zealanders who had written off the Black Caps’ chances in the World Cup were forced to eat their words Thursday after their shock semi-final win over India.

Radio Sport declared it “eat your words Thursday” after the sensational 18-run win at Old Trafford which finished in the early hours of Thursday morning, New Zealand time, while Stuff senior writer Mark Geenty called it “one of New Zealand’s best and most significant victories”.

Ahead of the critical knockout match, New Zealanders had largely consigned Kane Williamson and the Black Caps to the scrap heap.

They only qualified for the final four by having a better run-rate than Pakistan, although Pakistan had beaten New Zealand by six wickets and were seen by many critics and callers to talkback radio as more worthy semi-finalists.

Even former New Zealand great Daniel Vettori said before the toss at Old Trafford: “India remain my favourites to win it all.”

Instead it will be New Zealand who go into Sunday’s final against the winner of the second semi-final between hosts England and Australia.

There had been calls to axe long-serving, but sadly out-of-form opener Martin Guptill.

Once again he did not star with the bat but his match-turning, pinpoint runout of MS Dhoni made him an instant hero, joined by Jimmy Neesham for a sizzling catch and bowling spearheads Matt Henry and Trent Boult who destroyed India’s star-studded top-order batting line up.

Johnstone, who had labelled the Black Caps’ batting “boring” before the India clash, said there was “a need to acknowledge their brighter qualities -- brilliant bowling, fabulous fielding and unquestionable character.”

The New Zealand Herald hailed the victory as “the Manchester miracle” after heading their match preview earlier in the week: “Damp squib exit looms for Black Caps at Cricket World Cup”.

James Nokise noted on Radio New Zealand that New Zealand were “incapable of simply winning or losing. They insist on nail-biting, nerve-destroying, adrenalin-exhausting, rollercoasters that are edge-of-the-seat thrillers.”

The constant theme of calls to talk radio stations was an apology for even doubting New Zealand in the first place.

A man called Steve summed up the national feeling when he told Radio Sport: “What an absolute dickhead I was. I was wrong. Yay.” 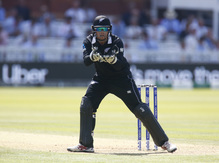 NEWS
New Zealand still World Cup contenders, feels Vettori
The Black Caps are not assured of a semi-final berth with one game left against title rivals England next week.