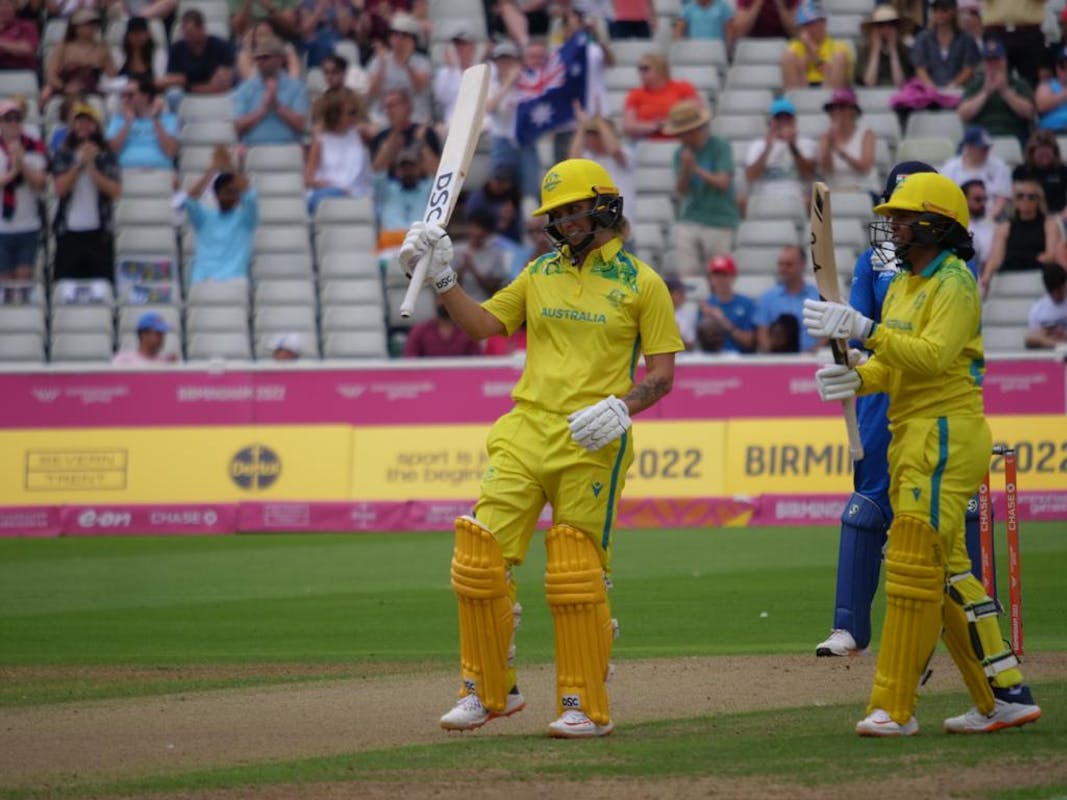 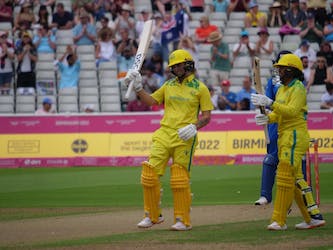 India pacer Renuka Singh's dream spell did not prove to be good enough as Australia came back from the brink to pull off a three-wicket win in the Commonwealth Games group A opener here on Friday.

The target of 155 should have been a straightforward chase but Renuka, playing only her seventh T20, broke the backbone of Australian batting with figures of four for 18 in four overs.

With Australia on the mat at 49 for 5, India should have completed the job but allowed Ashleigh Gardner (52 not out off 35 balls) to change the game in two game-changing stands of 51 and 47 with Grace Harris (37) and Alana King (18 not out) respectively.

In the end, Australia overcame the target comfortably, showing the reigning T20 and ODI world champions can win from any situation.

Gardner's countering attack innings was the one to remember as she played with the tail to knock off the runs.

The Powerplay overs belonged to Renuka who produced a brilliant spell of fast bowling. She removed the dangerous Alyssa Healy in the first over to make the game interesting before getting rid of Beth Mooney and Australian skipper Meg Lanning.

A sharp inswinger led to the downfall of the aggressive Tahlia McGrath, making it 34 for four with India all over their fancied opponents.

However India lost the momentum as their premier weapons -- left-arm spin twins Radha Yadav (0/42 in 4 overs) and Rajeshwari Gayakwad (0/24 in 2 overs) gave away 66 in six overs between them to let the momentum slip.

Debutant slow medium Meghna Singh was also pedestrian at the back-end when Gardner and King sent her for a leatherhunt.

Earlier. Shafali Verma (48 off 33) and skipper Harmanpreet Kaur's (52 off 34) stroked filled innings entertained the Edgbaston crowd but the other batters disappointed.

Smriti Mandhana facing pacer Darcie Brown on the first ball of the competition marked the beginning of a pivotal point in women's cricket with the game aiming to reach the Olympics via the CWG route.

However, the Harmanpreet-led side lost their way in the last five overs with five wickets falling for 39 runs. Smriti played some elegant shots during her short stay before Shafali and Harmanpreet took the attack to the Australian bowlers.

With a bit of luck, Shafali smashed Darcie for three fours in a row in the 10th over to set the alarm bells ringing in the opposition camp. Harmanpreet got going with a paddle sweep off spinner Ashleigh Gardner and targeted the spinners like she usually does.

Her only six of the innings came in the 20th over when she stepped out to dispatch Jess Jonassen over long on before a sweep brought her seventh 50 in T20 Internationals.

The lack of support from the other end hurt India's chances of putting up a formidable total with lower middle-order hardly contributing.

Having said that, the game was a lot a more about numbers and statistics on a balmy Friday afternoon.

The game did not involve hosts England but long queues were witnessed before the start of the game as enthusiastic fans trickled into the 25,000 capacity Edgbaston Stadium. The Stadium was half full but it still made plenty of noise with each boundary coming from the Indians' bat.

"We love cricket whether men's or women's cricket. I also watched the Indian men's team here earlier this month, I paid 140 pounds for that. Now I paid about 22 pounds," said Birmingham resident Paramjeet.

Even the non-cricket fans came to be part of history.

"This is my second live game ever. I watched a men's game in Antigua four years ago and now this. I am here on a four day trip from Surrey and will be watching as many sports as I can. The atmosphere looks great today," said Linda Casey on way to entering the Stadium.