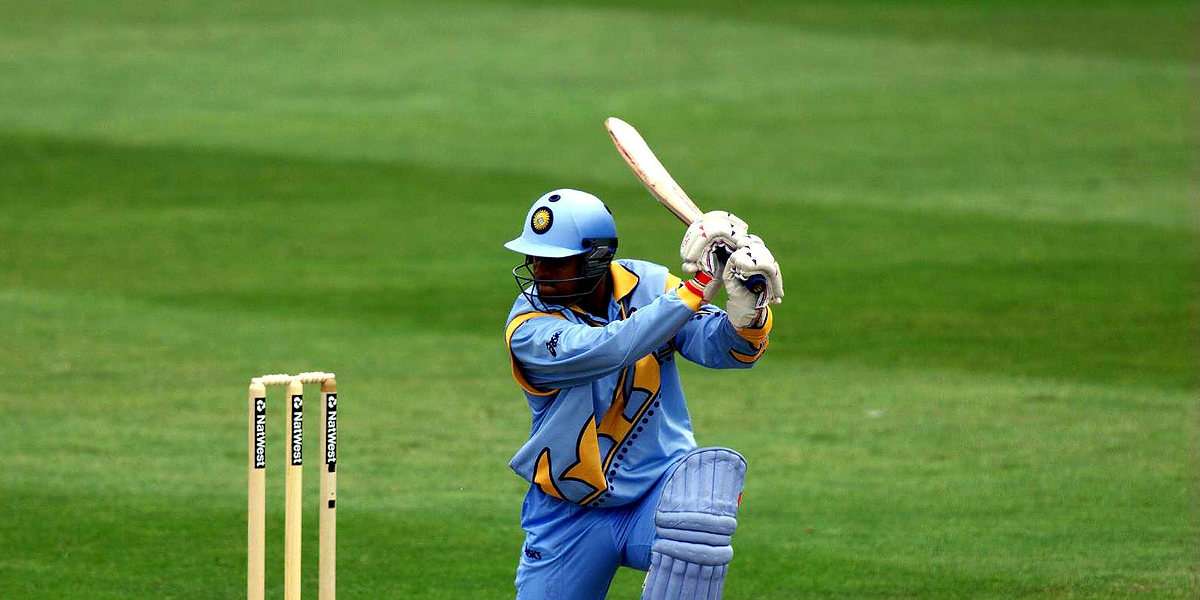 When people hear the name Rahul Dravid, most immediately associate it with an indestructible defence in whites. And that’s with good reason. Dravid is indeed one of the greatest Test batsmen to have graced the game. So much so that people often tend to forget that he is one among only 14 batsmen to have scored over 10,000 runs in One-Day International (ODI) cricket.

Throughout his career, Dravid was known as a player who wouldn’t back down from a challenge. He showed that when after a poor year in 50-over international cricket in 1998, he turned things around magnificently. On the back of twin centuries in the Hamilton Test, Dravid began 1999 with a hundred in ODIs too – an unbeaten run-a-ball 123 against New Zealand in Taupo.

By the 1999 ICC World Cup, Dravid had consolidated his place in the Indian ODI line-up and it was in that tournament where he would eliminate all doubts about his ability in limited-overs cricket. In eight innings, he went on to register five 50+ scores which included back-to-back centuries against Kenya and Sri Lanka. The latter saw the Indore-born cricketer score 145 from just 129 deliveries and was involved in an unforgettable 318-run partnership with Sourav Ganguly, a world record at the time. Interestingly, Dravid – along with Sachin Tendulkar – would break this partnership record just a few months later. 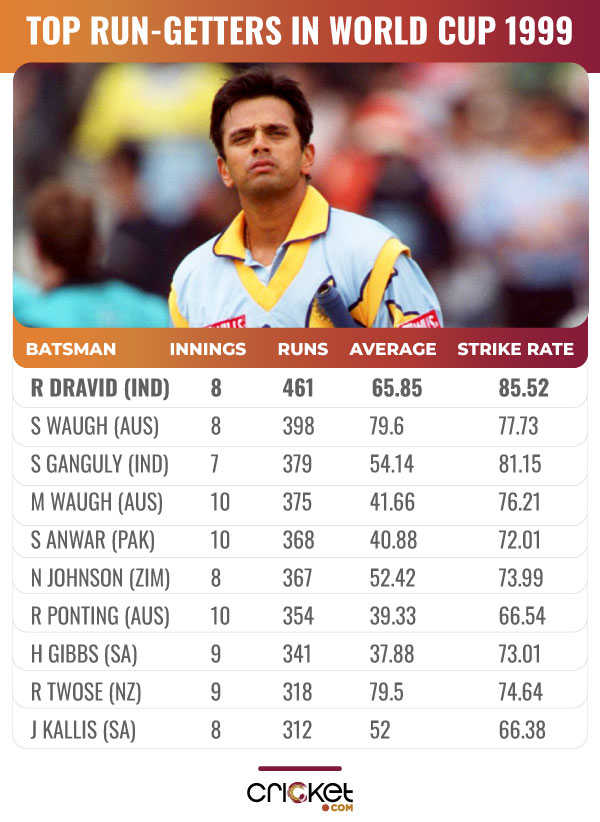 Dravid ended the 1999 World Cup as the tournament’s leading run-getter, scoring 461 runs at an average of 65.85 and a strike-rate of 85.52. His scoring rate was especially impressive as none of the other nine batsmen who notched up 300+ runs at the event had a higher strike-rate. For a batsman who had been often criticised for not scoring fast enough, this was just what he needed.

Four years and a few months later, India were facing New Zealand during the TVS Cup tri-series in Hyderabad. Walking into bat with 38 deliveries left and the score reading 283/3 after centuries from Tendulkar and Virender Sehwag, you would have expected Dravid to bat aggressively. But no one could quite predict just how aggressive he would be with his batting.

In an innings that lasted 22 deliveries, Dravid hit five fours and three sixes en route to an unbeaten fifty. In fact, it was at the time and still is the joint-second fastest half-century by an Indian batsman in ODIs. Once again, he showed his adaptability. 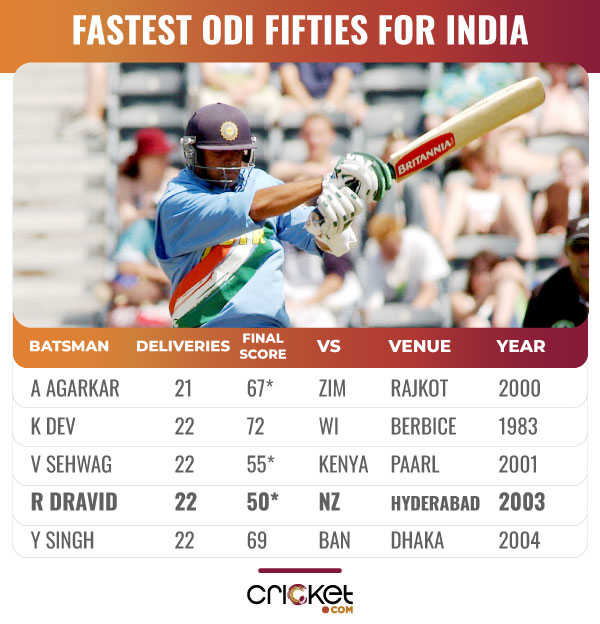 Poor form shortly after he resigned as captain in 2007 saw Dravid dropped from the ODI team. But it wasn’t the last sight of him in coloured clothing for India. Throughout his career, he was often known as a man for a crisis and when India found themselves in such situations later, he was drafted back into the team on a couple of occasions.

The first instance came in 2009. After India had endured a poor campaign at the ICC World T20 in England, the selectors brought Dravid back into the team ahead of the ICC Champions Trophy to be played in South Africa. Despite scoring a half-century in one of his two innings at the tournament, he found himself out of favour in white-ball cricket immediately after.

In 2011, Dravid was included not only in the ODI squad but also the T20I squad during the tour of England. Once again, it was on the back of a poor performance from the team, albeit this time it was in red-ball cricket. The Indian side had fared poorly during the Test series in England, with Dravid the only shining light. Yet, the call-up was a very surprising one and the former India captain announced his retirement from white-ball cricket at the end of the tour.

While Dravid’s sole T20I match is well-remembered for his three consecutive sixes off the bowling of Samit Patel, he would end an illustrious ODI career with a fifty in Cardiff. Standing at the non-striker’s end during Dravid’s final dismissal in the format was Virat Kohli who, incidentally, would go on to become the fourth Indian batsman (and the first after Dravid) to get to 10,000 runs in ODIs.

In addition to his batting, Dravid’s time as a part-time wicketkeeper also helped India greatly. During the 2003 World Cup, he kept wickets throughout which helped India play seven batsmen in the team. This tactic worked very well as India reached the World Cup final for the first time in 20 years.

Dravid’s former India team-mate Aakash Chopra, while writing on ESPNCricinfo when the former retired from all international cricket in 2012, referred to Dravid as “the most evolved cricketer of this era”. And Dravid’s ODI career is a testament to that fact. He adjusted his game not only to answer the demands of limited-overs cricket but to become one of the finest ODI batsmen India has ever produced. 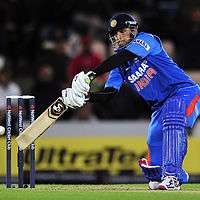