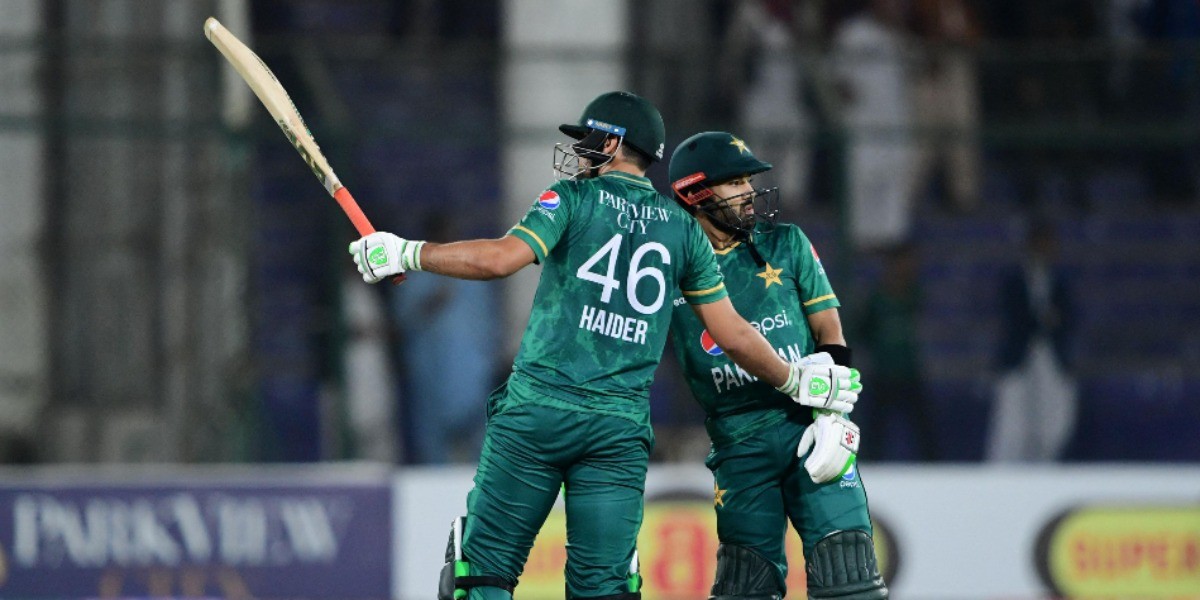 Mohammad Rizwan scored a 52-ball 78 while Haider Ali smashed 68 off 39 balls as Pakistan outclassed West Indies in the first T20I to win by 63 runs on Monday at the National Stadium in Karachi. By doing so, Babar Azam's men became the first T20I side to win 18 matches in a calendar year.

After being put in to bat by Nicholas Pooran, Pakistan lost captain Azam in the first over when he edged spinner Romario Shepherd to the keeper. Fakhar Zaman was also dismissed soon by Akeal Hosein in the fifth over to reduce the hosts to 35/2. Windies' joy didn't last long as Rizwan and Haider added 105 for the third wicket in just 62 balls.

Both the batters took the inexperienced bowling lineup to the cleaners with Rizwan reaching his fifty in 34 balls and Haider completing his in 28 balls with a six off Odean Smith. Shepherd brought an end to the partnership in the 15th over after Smith took a superb running catch on the deep mid-wicket boundary.

Oshane Thomas dismissed Asif Ali, while Smith got rid of Iftikhar Ahmed in consecutive overs as Windies looked to pull things back at the death. However, Mohammad Nawaz smashed Shepherd's penultimate over for 21 runs as Pakistan reached 200/6 in 20 overs.

Chasing a big total, West Indies kept losing wickets regularly which started with Brandon King's dismissal in the second over. Pooran looked bullish from the start scoring two sixes and a boundary but lost his off-stump to Mohammad Wasim jr's scorching yorker in the fourth over. Devon Thomas was the next to go as Wasim trapped him with a toe crusher as the Windies were reduced to 40/3 in 5.3 overs.

Pakistan vice-captain Shadab Khan sent back Shai Hope and Shamarh Brooks in the 10th over while Haris Rauf dismissed Dominic Drakes cheaply. Shadab then got the wicket of Rovman Powell reducing Windies to 88/7.

Odean Smith (24 off 23) and Romario Shepherd (21 off 32) added 46 runs 22 balls before Shaheen Afridi and Wasim sent the duo back in consecutive balls. Wasim then cleaned up Oshane Thomas to wrap up the game for the hosts.

The second T20I will be played on Tuesday at the National Stadium.