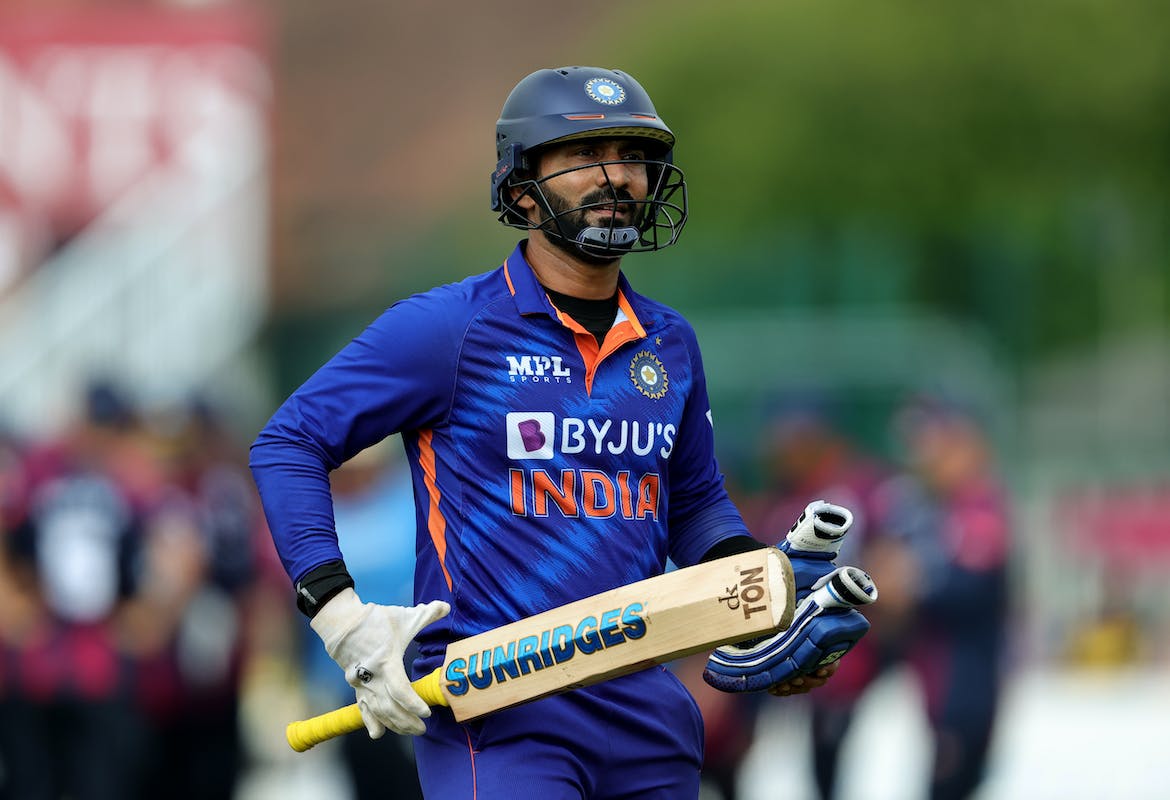 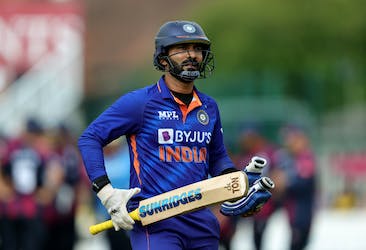 Rohit Sharma's elegant half-century and Dinesh Karthik's blazing finish were backed up by a solid bowling performance as India made short work of West Indies with an easy 68-run victory in the first T20I on Friday.

While Rohit set up the platform with a 44-ball-64, it was Karthik's calculated assault -- an unbeaten 41 off 19 balls -- that took India to 190 for six after being put into bat.

The last three overs of the Indian innings yielded 45 runs, which became the turning point.

On a track where there was spongy bounce with a bit of turn and grip, Indian spinners Ravichandran Ashwin (2/22 in 4 overs), Ravindra Jadeja (1/26 in 4 overs) and Ravi Bishnoi (2/26 in 4 overs) got wickets at regular intervals to restrict the hosts at 122 for eight in 20 overs.

Arshdeep Singh (2/24 in 4 overs) and Bhuvneshwar Kumar (1/11 in 2 overs), despite some initial pasting, got their share of breakthroughs. Hence, a below-par show by top-order, save Rohit, didn't have telling consequences on India.

For coach Rahul Dravid, almost all the strategic changes in the playing XI seemed to work. Suryakumar Yadav (24 off 16 balls) provided an interesting option as an opener while the manner in which Arshdeep deceived a rampaging Kyle Mayers with a short delivery spoke volumes about his temperament.

Ashwin and Bishnoi, both non-regulars in the playing XI, were brilliant as the former showed his variations and the latter was happy bowling a bunch of googlies which the opposition batters failed to read on most occasions.

However, if one has to speak about the set-up, then it was skipper Rohit, who gave a glimpse of his vintage self with some breathtaking shots en route his 27th half-century.

The Indian captain who endured a barren spell in the shortest format since the IPL, has changed his game from the England T20s. In the process, he reclaimed his position as the highest run-getter (3443 runs) in T20Is from Martin Guptill (3399 runs).

His innings had seven fours and two sixes --- a lofted shot dancing down the track off Jason Holder and a short-arm pull off Alazarri Joseph.

There were some delectable boundaries too -- a back-cut, a cover drive and a deliberate glide over short third-man to enthral a sizeable Indian crowd present at the Brian Lara Stadium.

After being put into bat, Suryakumar Yadav's elevation at the top of the order showed that coach Rahul Dravid is still looking at other options as Rohit's opening partner, despite Rishabh Pant looking comfortable as an opener.

To be fair, Surya didn't do all that badly and he showed intent during his 16-ball 24, which included a breathtaking six -- a swivel of hips to send a rising delivery behind the square -- besides three boundaries.

But, while trying to whip left-arm spinner Akeal Hosein through mid-wicket, all Surya managed was a thick outside edge to short third man. A lot of credit should go to Hosein, who was brought well inside the powerplay and did a brilliant job with figures of 1 for 14, including 14 dot balls.

It was Hosein, who didn't let Rohit tee off during that phase while Shreyas Iyer (0), Pant (14 off 12 balls) and Hardik Pandya (1) didn't get too many at the other end. Karthik, the team's designated finisher, justified his billing as 52 runs came off the last four overs in a seventh-wicket stand with Ashwin (13 not out).

It was left to Karthik, the eternal '20-ball man', who smashed four fours and two sixes in a 360-degree display of shot-making.