Joe Root insisted England would avoid pressing the panic button after going 1-0 down in the Ashes with a crushing 251-run defeat in the first Test at Edgbaston.

England needed to bat out the whole of Monday’s final day to salvage a draw ahead of next week’s second Test at Lord’s.

But England were dismissed for just 146 inside 53 overs, with Australia off-spinner Nathan Lyon taking six wickets, as they lost at their Birmingham ‘fortress’ for the first time in 12 matches in all formats.

Lyon’s efforts on a wearing pitch were in marked contrast to those of England off-spinner Moeen Ali, whose lack of control, never mind wickets, was exemplified by a couple of ‘beamers’ he bowled during Australia’s mammoth second innings 487-7 declared.

Somerset left-arm spinner Jack Leach has been tipped to replace Moeen at Lord’s, having bailed England out with a career-best 92 in their Test win over Ireland at the ‘home of cricket’ last month.

“With Mo, you’ve got to remember how threatening he can be and what an asset he has been to this team in the past,” said Root.

“Whenever he’s been written off before he generally comes back stronger, especially in English conditions.

“We’ve got to make sure we’re very clear about we approach the next game and not make too many emotional decisions,” he added.

Root said England could take heart from the way they won the World Cup earlier this season, when they had to overcome pool-stage defeats, including a shock loss to Sri Lanka, before beating New Zealand in a thrilling final.

“Seeing emotionally how things changed throughout the World Cup is probably a good example to the group,” Root said.

“Look at where things seemed to be after that Sri Lanka game, and where we finished up.”

Meanwhile Root defended England’s move to field James Anderson at Edgbaston after England’s all-time leading Test wicket-taker bowled just four overs on the opening morning before breaking down with an injury to the same right calf that had made him doubtful for the match.

Being a bowler down was a huge setback for England and what role the 37-year-old Anderson plays in the rest of the series remains uncertain.

Root, however, said he had no regrets about the veteran paceman’s inclusion.

“He passed every medical test. He was fit to play.

“It’s one of those freak scenarios where he pulled up -- because it’s the same calf, we’re not sure whether it’s a slightly different injury.

“Jimmy in those conditions, if he bowls 15 overs, things could have been very different in the first innings in general.”

Former Australia captain Steve Smith marked his return to Test cricket following a ball-tampering ban with twin hundreds but Root said: “He’s got to start again when he gets to Lord’s.

“We’ve got to make sure that we make it very difficult for him to get in.” 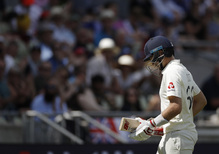