Joe Root is determined the “spicy” nature of England’s latest clash with Australia won’t prove a distraction when the arch rivals meet for a place in the World Cup final.

Tournament hosts England and reigning champions Australia will lock horns in Thursday’s second semi-final at Edgbaston in a fixture that takes place just weeks before the start of the Ashes series between the old foes.

Australia off-spinner Nathan Lyon has already done his best to unsettle England by insisting “it’s their World Cup to lose”.

But Root, a member of the England side that lost to Australia in the group stage, told reporters at Edgbaston on Monday: “Nathan has a lot to say, a lot of the time, so you just take it with a pinch of salt.

“It might be a way of taking pressure off himself and his team. I try not to get too involved to be honest.

“But generally we will go about things in our own way and just get ourselves ready as best we can,” added Root, who was involved in an infamous altercation with Australia’s David Warner in a Birmingham bar during the 2013 Champions Trophy.

England have yet to win the World Cup and made the last of their three losing appearances in the final back in 1992, while five-time champions Australia have never lost a World Cup semi-final.

England, however, have won 10 of the last 12 one-day internationals between the sides.

“There has been a lot made of the fear factor of playing against Australia, but I think this group of players over the last four years, their experiences against Australia are very positive,” said Root.

“They have got a lot of success in the bank. We will be drawing on that confidence that over a long period of time now we have been successful against Australia and we should take that into Thursday.

“It’s a great chance and a great week, it does feel special.”

Meanwhile Australia’s stars walked barefoot on the Edgbaston pitch on Monday in an unusual team bonding session in the build-up to their World Cup semi-final against England.

Aaron Finch’s side began their training session at Birmingham venue for Thursday’s England showdown by discarding their socks and trainers.

The World Cup holders then took a walk across the playing surface and sat for more than half-an-hour in the same state as they took it in turns to talk to each other about their emotions ahead of the final week of the tournament.

The move was inspired by Australia head coach Justin Langer, who last year described himself as “a bit of a hippy”, spending a month a year growing out his beard and walking barefoot.

Australia batsman Peter Handscomb has yet to play in the tournament, having joined up as a replacement for Shaun Marsh, but is in line to face England in place of the injured Usman Khawaja.

Asked for his take on the walkabout and ‘bonding circle’, Handscomb said: “It’s just a moment to get a feel for the ground, literally.

“You do that lap and you can see all the different views from the ground and where you might be fielding and it gives you an opportunity to take it all in before it all starts on Thursday.

“We had an open and honest conversation and it was great that some of the guys poured their heart out there about what it meant to get to the semi-final.

“There were some really good stories: what it meant for them and their first memories of cricket growing up. It was really nice to see what playing in the finals means to this group.” 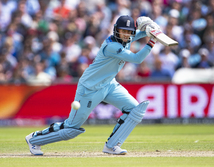